Outstanding in the field

Thanks to a creative architect, a new building that looks like a barn provides spaces for a husband and wife to pursue their post-retirement passions. 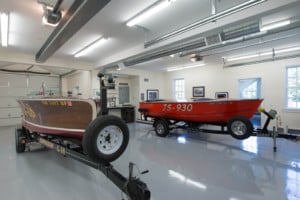 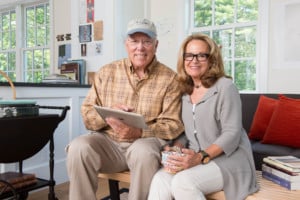 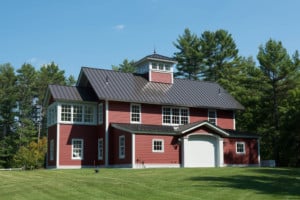 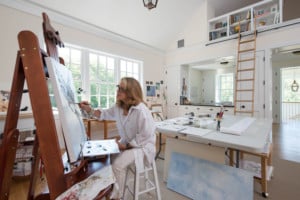 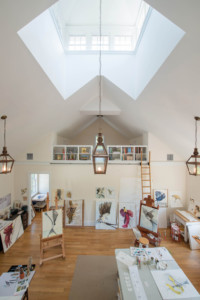 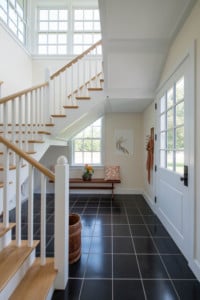 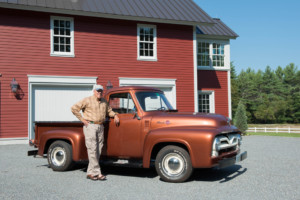 When you've worked together as long-and as successfully-as interior designer Margery Thomas Mueller and architect Michael Goldman have, you know who to call for help with design.

And that's exactly what Margery and her husband, Bob Mueller, did when they tried to envision a building that could store Bob's four boats. Bob knew the building would take up lots of space, but he wanted it to look like it fit on its rural one-acre setting about two miles from the Muellers' Alton home. "Although I like the look of a traditional hip roof barn with a cupola," Bob says, "I knew that a building like the one I wanted would need far sturdier construction."

To design this building, Margery suggested bringing in the best architect she knew. In the mid-1980s, she and Goldman both worked for Manhattan-based architect Thierry W. Despont, whose firm was known for its high-end residential projects, hotels and museums, with clients such as Bill Gates and Calvin Klein. By 1988, Margery left and launched her firm, Margery Thomas and Associates in New York. Early in 1998, Goldman started his company, Michael Goldman Architect, also in New York, and he and Margery reconnected on a professional level. "It was so easy to work together," Goldman says. "Our minds and tastes are in sync that way-what a pleasure!"

Since that time, Goldman's practice has focused mainly on designing country houses in Maine, New York's Hudson River Valley, the Hamptons and Connecticut. Margery's business grew to thirteen employees and specialized in residential interior design for clients in the New York City area. She and Goldman worked together on various residential projects in New York, ranging from elegant additions to extensive renovations.

"One project involved converting a stark white, contemporary home from the 1970s into a home inspired by a French carriage house," Margery says. "It was absolutely gorgeous, with wood paneling in the living room and repurposed antique barn beams on the ceiling-being there felt like walking into a Provençal house."

The next project they would do together, in early 2010, was the Muellers' barn. "Bob had very specific needs, so he could store his boats over the winter and provide the extensive care and maintenance wood boats require,"
Goldman says.

Bob's needs included being able to lift his boats off a trailer and on to a dolly, and then having enough open space to push the boat where it needed to go. Second, he wanted a bay to do finish work and a venting system to keep that space dust-free. Third on his list was a secure room for tools and fourth was room to park his restored 1955 Ford F-100 pickup truck. He thought the second floor could be studio space for Margery.

"That upstairs space turned out to be perfect for Margery," Goldman says. "She was looking ahead to a new chapter in her life with Bob and a chance to get back to her first love, painting." Although Margery majored in painting when she graduated from Carnegie Institute of Technology, now Carnegie Mellon University, in Pittsburgh, she built a successful career in interior design and raised her three daughters, who are now all married with children of their own. She has always been an avid collector of art, mostly by artists who created books, such as Leonard Baskin and Barry Moser. Until retiring last January, Margery never had enough time or a place to get back to her painting.

Creating a building that works

Margery's life changed in a big way when she met Bob, who was then a senior vice president at Bank of New York, in 2008. They were married the following year and, by January 2012, had moved permanently to New Hampshire. Bob had been coming to Wolfeboro for family vacations since 1972 and built his lake house in Alton in 1990. "I have always loved boats and the water," Bob says with a smile, "and this house was the perfect getaway."

While the Alton house provides all the comforts of home in a beautiful lakeside setting with views of Mount Major and Gunstock Mountain, it didn't have a place where Bob could store his four boats (three are replicas of vintage boats and the fourth is a twenty-four-foot Chris Craft built in 1930) and work on them during winter. In order to do this, he'd need a new building with two steel I beams-one in the main part of the space and the other in the finishing room-to accommodate the movable chain hoists. "These boats can weigh between four thousand and five thousand pounds," Bob says, "and I wanted to get them where they needed to be. In the finishing bay, you have to get the boat up in the air to paint the bottom."

As the building evolved to include a studio, the project became an exciting one for Goldman. "This building was going to accommodate two people and their individual passions under one roof," he says.

Goldman adds that he brought the same sensibility to the barn as he does when he designs a home. "I ask, 'How can I give the homeowners a tangible space that's more uplifting?'" he says. His answers include understanding the underlying
geometry of the space, its sense of proportion and the way daylight is used to enliven the space. "While the building didn't have to be so tall or have so many windows or a cupola, these elements help elevate one's experience in the space," Goldman says, "whether they are sanding a piece of wood or priming a canvas. In form and in purpose, designing this barn was an opportunity to make architecture more than just a functional building."

One of the challenges Goldman faced was where to place the stairway. He didn't want to interrupt the floor plans, so he decided to place the twelve-foot-by-twelve-foot stair in an attached tower-like structure outside the main spaces. "This way the stair tower gets to be something of its own," he says. "It's also kind of a metaphorical bridge between Margery and Bob, and allows them to reconnect through the day."

Facing south with windows all around the top, "the stairway is so beautiful," Margery says. "It feels like a piece of sculpture, and I'm always taking photos that show the play between the light and shadows there."

The cupola, whose tip is more than forty feet high, initially felt "enormous" to Margery. But Goldman knew what he was doing. "In a space as large as the studio [approximately 1,800 square feet], it can be dark, so the cupola provided a perfect opportunity for providing light on the inside. On the outside, it is a visual anchor to the site and to the roots of the building. It's also a vertical centerpiece."

Margery says that as soon as she installed the hanging lights, she saw how wonderful Goldman's design was. "Michael's proportions are perfect, and the lights I chose are open enough so that the eye picks up on them and stops going all the way up to the top. This way, the ceiling height feels connected to the space."

Bookshelves lining the loft walls also break up this continuum of height and create dimension for the space. In addition, they give Margery room for books she wants nearby. There is lots of wall space to hang her works in progress and enough tabletop space for her grandchildren to join her in painting in the studio.

Apart from its traditional look on the outside, the building is 100 percent twenty-first century at its core. A geothermal system provides radiant heat in the floors, which Bob says has "proven to be economical. The building is so well insulated that we rarely change the temperature."

In addition to being a place to store and work on his boats, Bob has found another use for the first floor of the building. As one of the people who's working on the New Hampshire Boat Museum's vintage boat regatta in September, he's been hosting meetings at the barn. "I set up two tables and director's chairs on the first floor, and the space is really comfortable," he says. "At the last meeting, everyone came early and left late. Ambiance makes such a big difference."

On a sentimental level, Bob feels that building this barn was a "huge investment in our future. Margery is an artist who never lost sight of her interest in art, and it was important to have a really nice place for her to work," he says. "I also wanted this building to be a place where we could be together."

Margery says that "the building gives me something I never had-permanence for my work and a foundation to build on. With Bob downstairs, being here is a very nurturing experience. This building is very home-like, a place where we can grow and find new adventures. What a gift!"

For Goldman, the best testimony to the success of his design is how quickly Margery established herself as an artist. "She is getting ready for her first solo show at a Manhattan gallery and this is thrilling, because her studio was not the original mandate for this building," he says. "I like to think that this building was helpful in getting her to this place, and that is very gratifying."