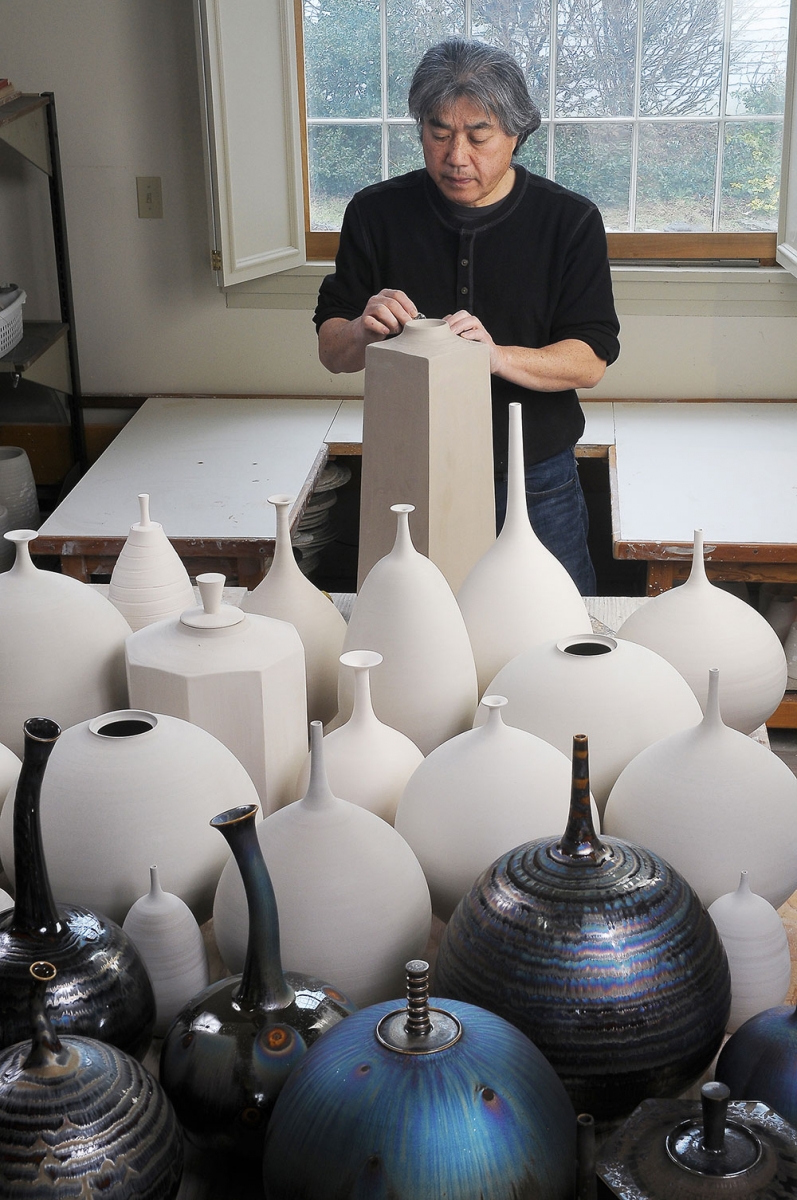 In his studio, Hideaki Miyamura uses porcelain coils to build the neck of a porcelain jar. In front of him are pieces ready for their first, or bisque, firing; beyond them is finished work.

When I first saw the pottery of Hideaki Miyamura nearly twenty years ago, I was awestruck. As someone who’s been a serious hobby potter my entire adult life, I had never seen such fine ceramic work—in porcelain, no less, a material that takes extraordinary skill to throw. I was amazed by Miyamura’s exquisite shapes—spherical and ovoid vases with perfectly proportioned necks; jars whose delicate lids fit flawlessly. His glazes were beautiful with a satiny hare’s fur finish, especially the plum-colored tenmoku, a type of iron-rich glaze that originated in China more than a thousand years ago and was eventually produced in Japan. It was tenmoku that ignited Miyamura’s passion for clay.

When I visited Miyamura’s studio last spring, he was getting ready for the prestigious Smithsonian Craft Show in Washington, D.C. To date, his work is in the permanent collections of the Asian Art Museum of San Francisco; the Auckland Institute and Museum in New Zealand; the Israel Museum in Jerusalem; the Peabody Essex Museum in Salem, Massachusetts; the Renwick Gallery at the Smithsonian Institution in Washington, D.C.; and the Victoria and Albert Museum in London, England.

Closer to home, the Pucker Gallery in Boston always has Miyamura’s work on display and has featured solo shows every other year since 2004. Gallery owner Bernard Pucker says, “Miyamura’s vessels are pristine, disarmingly simple, contemplative objects whose finishes reflect the panoply of the natural world—geologic phenomena, star-filled nights, undulating ocean waves and fiery sunsets.” They are sights to behold.

New Hampshire Home [NHH]: How did you find your way to clay?

Hideaki Miyamura [HM]: I grew up in Japan, where pottery is prominent in the culture. My father collected antique pottery, which he displayed in our house. When I was seven or eight years old, a friend and I always went to a nearby archaeological site to dig. We’d stay out until seven at night, and I kept the shards I found in a box—they were likely Yayoi earthenware, made about two thousand years ago.

I was a good student, and my parents wanted me to be a doctor. But I decided to come to the United States to find my way at age twenty-one to study art history and design at the Western Michigan University. English was a requirement for enrolling there. I liked drawing and painting, but wasn’t sure what to do next.

I returned to Japan in 1981 and worked for my father for two years— he was an architect who designed and built houses. I was still thinking about art and met a well-known potter named Susumu Takai in the next town. The first time I visited him, I was so fascinated I stayed overnight to watch his firing of pots.

I began an apprenticeship with him in 1983—he was a master of red copper and celadon glazes. From him, I learned the basic skills of ceramics, but realized I wanted to do something different and less commercial.

Then I found a book on the ancient tenmoku glaze, and saw four photographs of Chinese Song Dynasty tea bowls from the twelfth or thirteenth century. They were so beautiful and so mysterious, and I began looking for a teacher who knew the secrets of these pieces. In a book listing potters and their work, I found master potter Shurei Miura in Yamanashi; he was a master of tenmoku glazes. I called to see if he was taking apprentices, and he told me to come see him the next day. This was a big step for me, as his studio was a five-hour train ride away and going there meant leaving behind the life I’d known.

NHH: What was the allure of tenmoku?

HM: The molten iron in these glazes can sometimes combine in crystals, merge in oily spots or melt in glossy pools. Also, the natural ash in the kiln makes the glaze glisten. The Japanese call the effect “hare’s fur” because of the glaze’s iridescence, shimmer, and striations of brilliant blues, green and yellows. This is what attracted me—to figure out how to make an opalescent tenmoku glaze.

NHH: What did your apprenticeship with Mr. Miura involve?

HM: Mr. Miura was also a master of throwing porcelain, and my objective was to become as adept as he was. Every day for the first year, I threw only sake cups. The second year, I made teacups. The third year, I was allowed to throw small vases; the fourth year, plates; and the fifth year, teapots. I’d make four hundred or more pieces each day, working from 7 a.m. until 6 p.m. In the morning, I mixed glazes, and in the afternoon, I threw or did whatever assignments Mr. Miura asked me to do. Dinner was at 6 p.m. and from 7 until 9 p.m., I tutored the Miura children. After that, I went back to the studio and practiced until 11 p.m.

I kept a notebook of everything Mr. Miura taught me. But when I asked what was in his glazes, he told me to figure it out. In Japan, pottery studios are family businesses and information such as glaze recipes stay within the family.

NHH: What did you do when your apprenticeship ended?

HM: I came back to the United States in 1990 and settled in Ipswich, Massachusetts, where my former wife was from. I set up a studio, and began trying to find the right combination of clay and glazes. I couldn’t use glazes formulated in Japan on clay from here—the chemistry was totally different. So that was a struggle. At the same time, I had to earn money. So for three years, I worked at nursing homes for two 12-hour shifts a week. This gave me long stretches of time in the studio to reformulate and test my glazes.

NHH: When did you finally get your first big break?

HM: In 2000 at the Washington (D.C.) Craft Show, I won first prize and wound up selling every piece I had to collectors. I still sell to these collectors, and one of them has 250 pieces of my work. Most of my ten collectors have forty to fifty pieces each.

Although the Washington Craft Show is no longer held, I do the Smithsonian Craft Show every year along with the American Craft Council Show in Baltimore and the League of New Hampshire Craftsmen Annual Fair (see sidebar on page 97). I do fewer shows than I used to and show more in galleries, such as the Pucker Gallery in Boston; Sakuranoki Gallery in Tokyo, Japan; the Michele Beiny Gallery in New York; and the Wexler Gallery in Philadelphia. And, my partner— textile artist Pamela Bracci—and I are opening Enzo Gallery in West Newbury, Massachusetts this coming fall.

NHH: Why do you prefer porcelain?

HM: Glaze colors are bright on porcelain and its surface is smooth. But porcelain is definitely more difficult to throw.

NHH: How did you reformulate your glazes?

HM: I’ve done a lot of experimentation. For example, I tested one glaze more than two hundred times to get a peacock effect.

In every firing, between only 20 percent and 30 percent of the pieces are good, in my estimation. I define “good” as the glaze coming out perfectly—that is, the color and texture (either shiny or matte) are what I wanted—and the shape is good.

NHH: Your pieces seem to be more decorative than functional.

HM: Yes, that’s true. I’m always thinking about how a piece will fit in the environment it’s in.

NHH: What’s ahead for you as an artist?

HM: I still work seven days a week, from 8 or 9 in the morning until 4 or 5 in the afternoon. In Japan, potters live a long time. I think it’s important to use your hands to create, as it keeps the brain sharp. I’m still interested in learning other ways of making art. I’ve taken workshops in making glass and silver jewelry, and this summer, I am working on sculpture in clay.

Left: Hideaki Miyamura trims a leather-hard lid whose shape was inspired by the spire on the roof, or stupa, of a Buddhist temple in Kyoto, Japan.

Right: The silvery spots on this jar with an iron crystalline glaze are the result of a slow increase in kiln temperature and then a natural cooling. “Firing is the key,” Miyamura says.

Left: Three glazes—each with a different melting point—necessitated three separate firings. “This is a very special piece—the only one I have,” Hideaki Miyamura says.

Right: The “silver eyes crystalline glaze” was applied over an orange glaze.

Left:  The “seafoam blue glaze” was inspired by the ocean waves’ bubbles.

Middle: The “blue waves glaze” resulted when a brown glaze broke into waves over a blue hare’s fur glaze.

Right: Miyamura tested one glaze more than two hundred times to get this “peacock glaze.”  He says, “I always have an idea in my brain for the effect I want to get.” 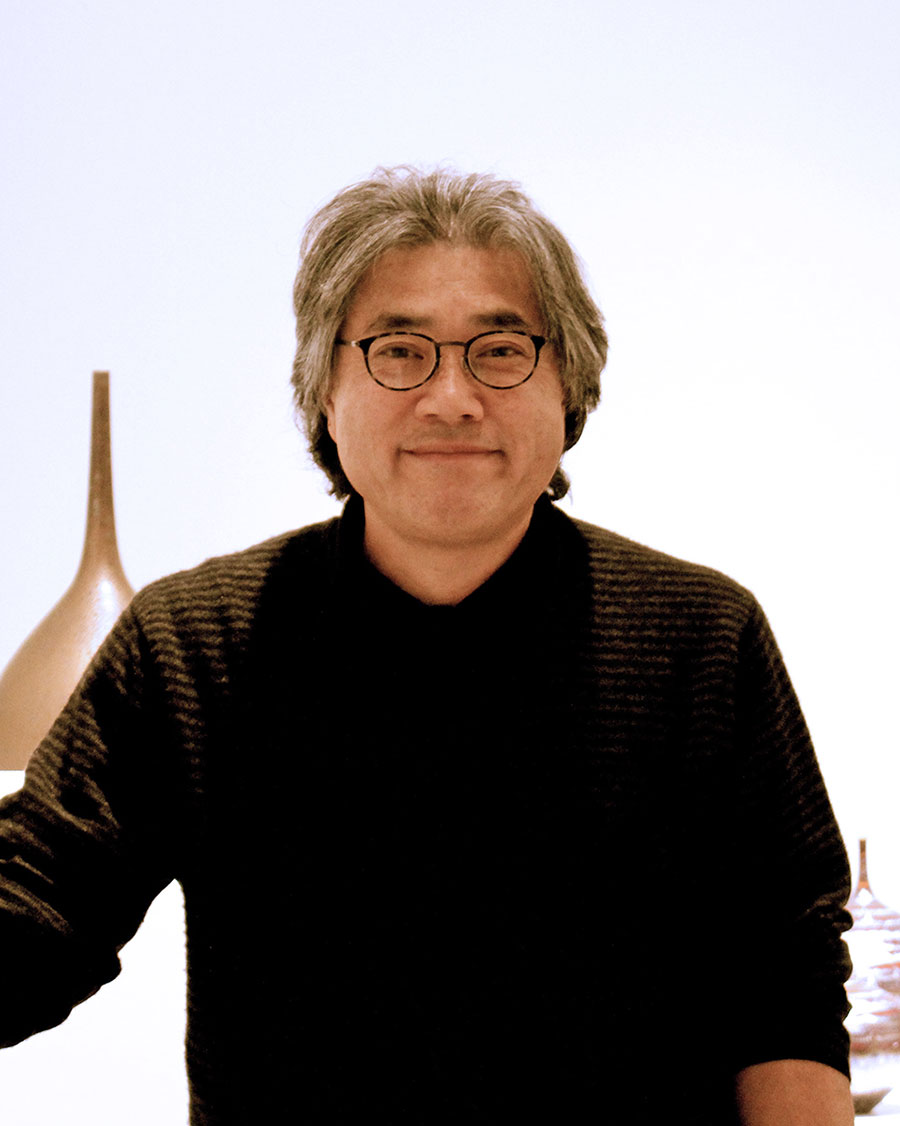 See and shop for one-of-a-kind fine crafts that are both beautiful and functional. And meet the more than 350 makers, including potter Hideaki Miyamura, and learn about their vision and passion for their craft. Other highlights of the fair include:The League of New Hampshire Craftsmen holds its eighty-fifth annual fair August 4–12 at the Mount Sunapee Resort in Newbury. As one of the premier craft shows nationwide, this juried fair showcases work by some of the finest craftspeople in the country.