A New Hampshire-born architect designed many major churches and other buildings, including this small-town work of art. 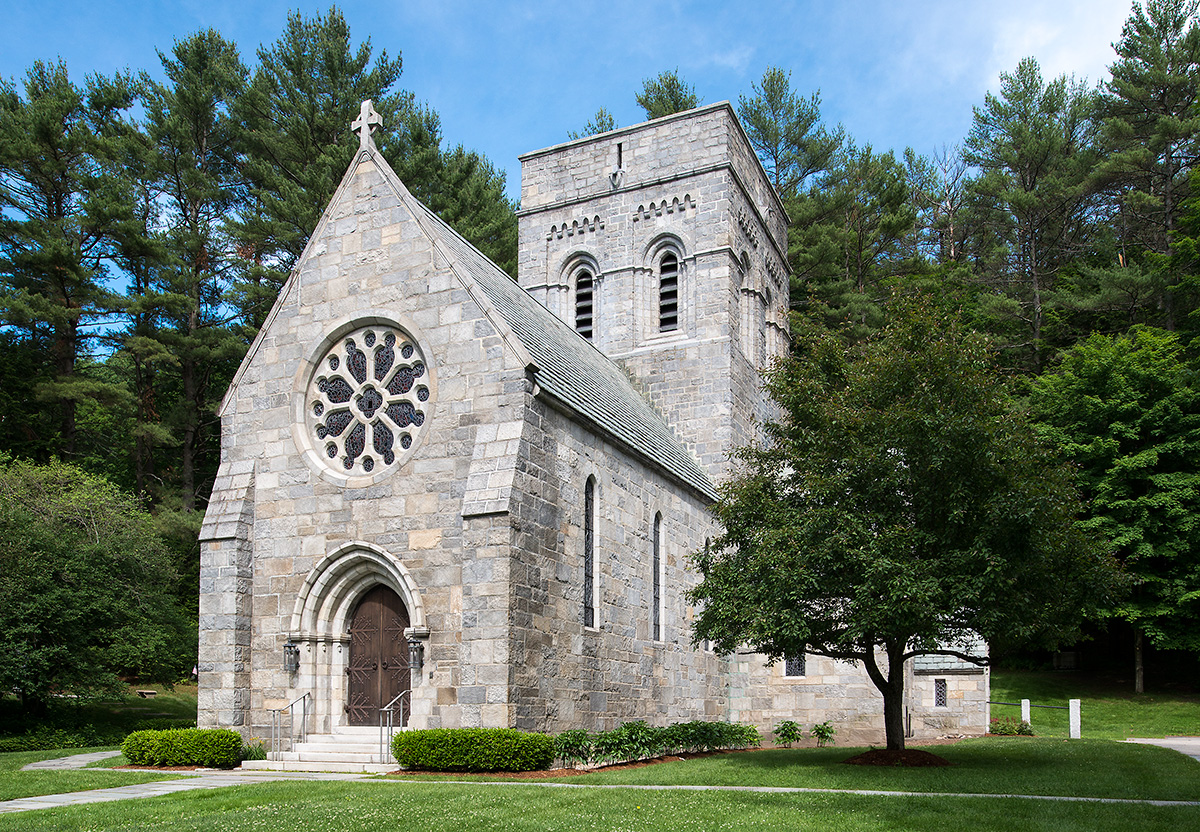 Architect Ralph Adams Cram, who was born in Hampton Falls in 1863, designed All Saints’ Church in Peterborough in 1913. During his long and prolific career (he died in 1942), Cram designed many significant buildings and became the foremost Gothic Revival architect in the country.

Coming to or going from Peterborough, it’s easy to miss All Saints’ Church. The jewel of a building on Route 202—or Concord Street as its known closer to town—sits on four acres, set farther back from the road than its neighbors and nestled in the pine woods that rise behind it. Completed in 1920 and named to the National Register of Historic Places in 1980, “the church is one of the most beautiful in the country,” says its rector, the Reverend Jamie Hamilton. “I thought this even before I became rector in 2014.”

The building was born from the Peterborough Episcopal community’s need for a place of worship and philanthropist Mary Lyon Cheney Schofield’s wish to honor the memory of her family. Her first husband—Charles Paine Cheney (his father, Benjamin Pierce Cheney, founded the company that later became American Express)—died in 1897, shortly before the birth of his and Mary’s third child. Ten years later, Mary married Harvard University professor William H. Schofield, who died in 1920. Mary’s youngest son, Lieutenant William Cheney, was killed during World War I. Mary lived until 1943, and she, her husbands and William are buried in the crypt below the chancel. 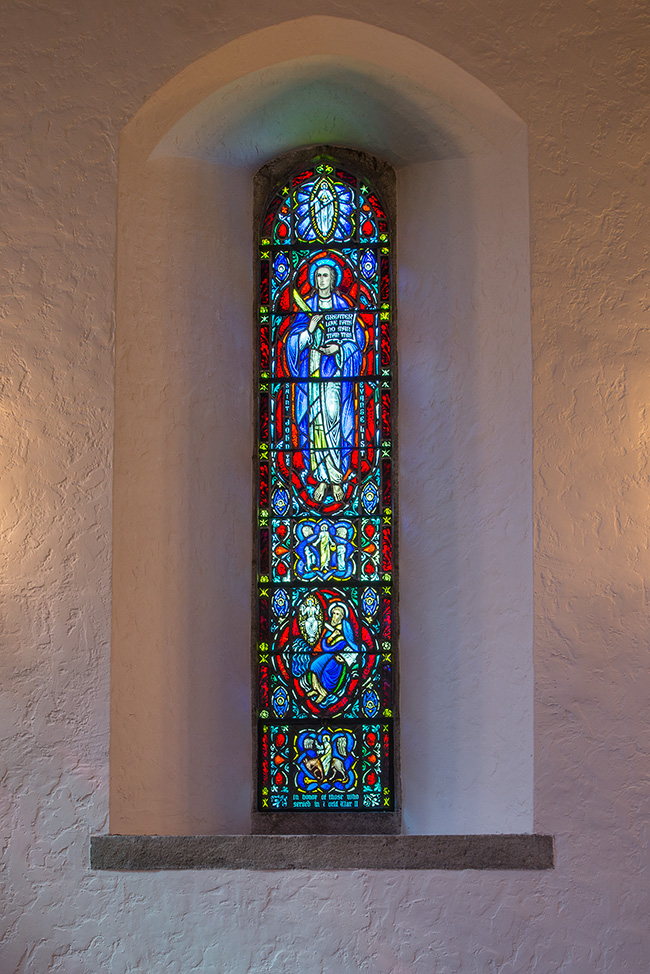 The St. John window was installed in 1947 and given by the parish to honor those who served in World War II.

Mary was a woman of great energy and intelligence, and had a keen eye and impeccable taste. To design the church, she chose architect Ralph Adams Cram. Born in Hampton Falls in 1863, and educated in Exeter and at Yale University, Cram founded the Boston firm Cram, Goodhue and Ferguson, and became the foremost Gothic Revival architect in the country. He admired the grace and refinement of Gothic architecture, and was a prolific designer of collegiate and ecclesiastical buildings throughout the United States.

Among Cram’s commissions were the U.S. Military Academy at West Point; New York City’s St. Thomas Church; Nashua’s Hunt Memorial Library; as well as multiple buildings at Princeton University, Rice University and Phillips Exeter Academy. He transformed the Romanesque Cathedral of St. John the Divine in New York City into a late Gothic building that became one of the great cathedrals of the world. He headed the architecture department at Massachusetts Institute for Technology (MIT) for seven years, and wrote many books on architecture and aesthetics. Cram was a fellow of numerous architectural associations, both in the United States and abroad; he was awarded honorary doctorates from Princeton, Yale, Notre Dame and Williams; and he made the cover of Time magazine in 1926.

Mary and Cram agreed that the new Peterborough church was to be simple in design but with exquisite details, and Cram later described the building as “a study in form and proportion.” He stressed the importance of local materials and local workmen for the building, so that it would become “a true shrine, and a thing of and for the community.” Granite, an abundant material here in New Hampshire, was quarried nearby and used for construction.

Cram believed that the visual arts enhanced the religious experience, so to embellish his churches, he followed the tradition of the Arts and Crafts movement. For All Saints’ Church, he called upon other members of the Society of Arts and Crafts in Boston, which he co-founded in 1897. Johannes Kirchmayer, one of the great wood carvers of his era, did all the wood carving in the church. His oak panel across the back of the altar (the reredos) is meticulously covered with gold leaf and depicts the nativity. Frank Koralewski made all the iron work for the church’s doors, including its ornamental hinges, latches and keys.

Stained-glass windows were a key element of medieval Gothic churches, and so became part of All Saints’ artistry. To design the windows, Cram chose Charles J. Connick of Boston, who favored the clear colors of thirteenth-century glass over the opalescent Tiffany glass popular in the early twentieth century. Mary worked with Cram and Connick on the theological plan for the early windows, such as the rose window on the west façade and the lancet windows near the altar. Over the next forty years, Mary’s family and other parishioners gave additional stained-glass windows.

Subsequent parishioners realized what a precious gift they had inherited, and in 2000, they undertook an extensive renovation of the church. It resulted in new slates and new copper on the roof; a water-repellant treatment for the exterior walls; repair and repainting for the interior plaster walls; masonry repair around the rose window; repointing around the exterior granite blocks; and cleaning of all woodwork, stained-glass windows, furniture and other artworks.

Something you don’t see at All Saints’ Church are the acoustics, which the Reverend Hamilton says are “amazing.” Jody Hill Simpson, a choral conductor, moved from Boston to the Monadnock Region ten years ago and attended a Christmas pageant at the church. “I was enchanted by the aesthetic beauty of that service and also inspired by the world-class acoustics inside All Saints’ Church,” she says. She and her husband Rick are now members of the twenty-member choir, led by Jeff Fuller.

The acoustics—along with the architectural design and decorative details of All Saints’ Church—succeed in their aesthetic and spiritual mission. “The design of this church is a wonderful mix of opposites—it is bold yet subtle,” says the Reverend Hamilton. “The building is intimate, yet it looks like a cathedral. I feel the presence and grace of God in this building.” 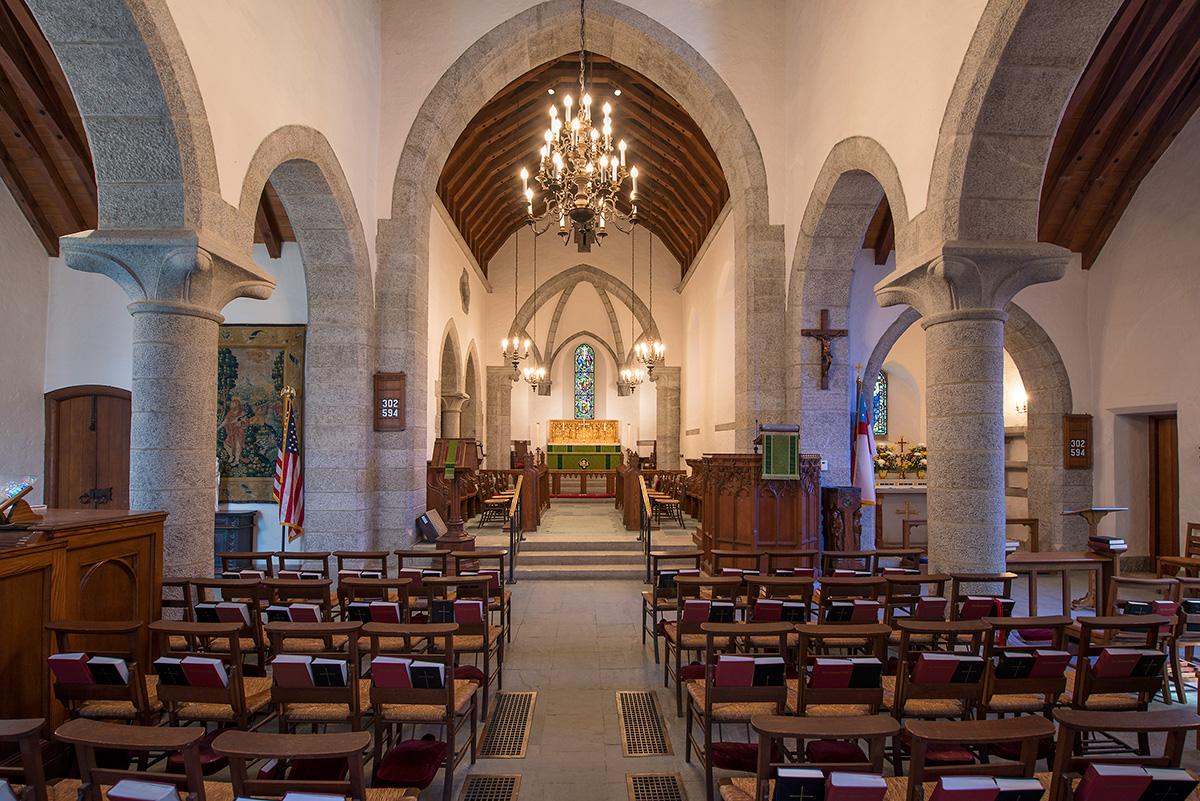