Members of the Derry Garden Club share their expertise and enthusiasm for growing food with young people. 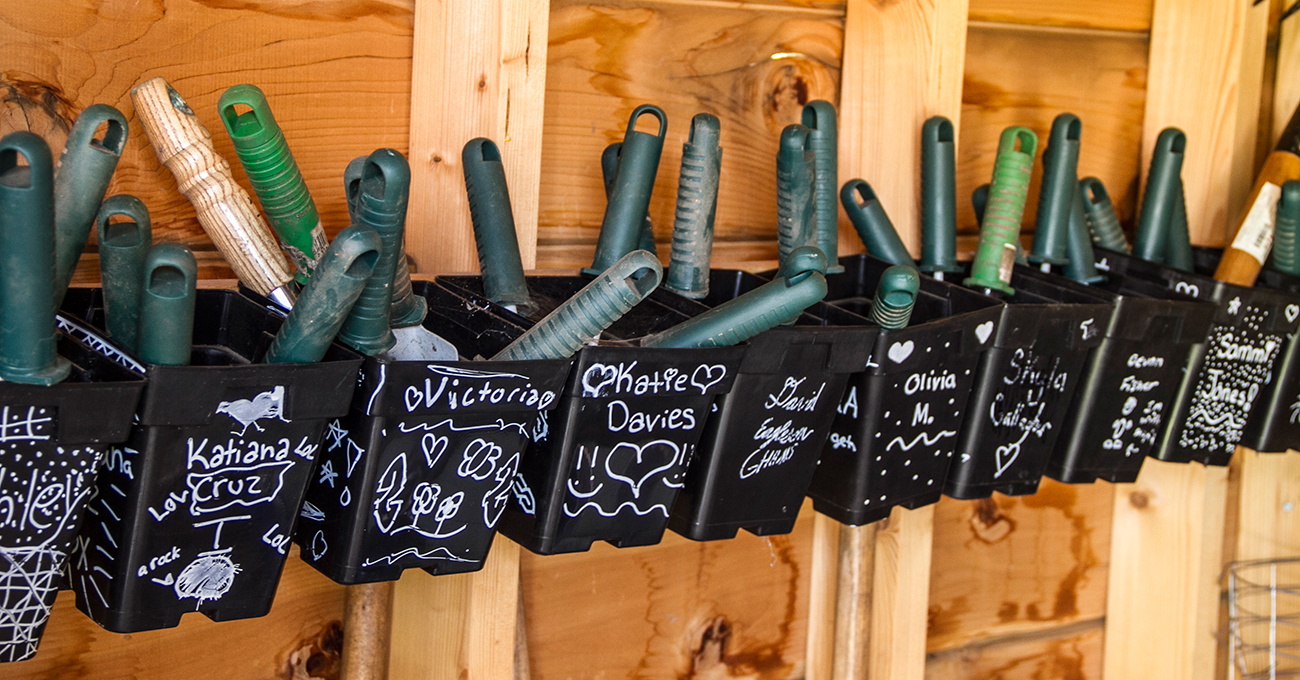 One in three American children is overweight or obese. According to the American Heart Association, a wide range of health problems that usually aren’t seen until adulthood are being seen in children with obesity; psychological effects include low self-esteem, negative body image and depression.

In response, Arthur McLean, director of the Boys & Girls Club of Greater Derry, worked with the Derry Garden Club to apply for a grant from the Harvard Pilgrim Health Care Foundation in 2008. The team envisioned encouraging healthy eating by developing an on-site vegetable garden. 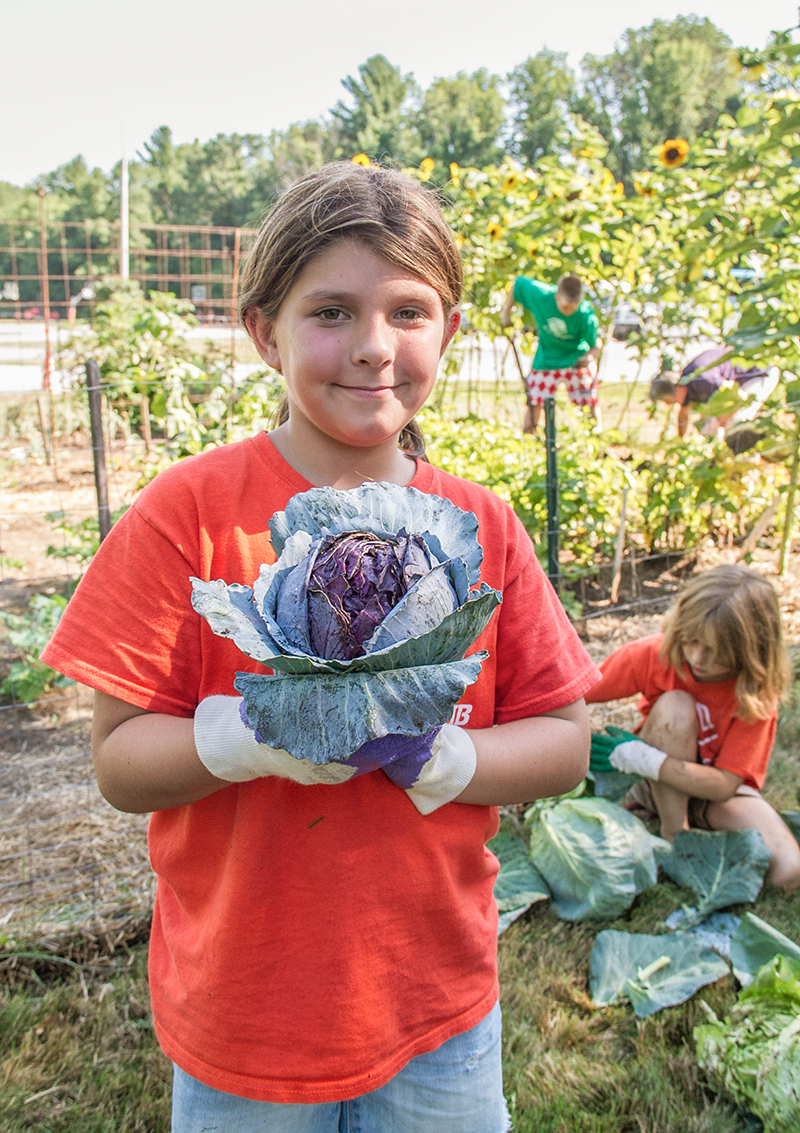 Bayley Clifford proudly holds one of the cabbages she helped to grow in the Boys & Girls Club of Greater Derry Youth Garden.

The plan was successful and Blanche Garone, of the Derry Garden Club, has been spearheading the project since 2009. She developed a garden guide covering basic garden tasks; the idea was for garden club volunteers to use the guide and keep the project going. “The purpose of our program is to introduce the children to gardening, encourage tasting, show them where food comes from, teach them how to use it and get them outside,” Garone says.

Jackie Dempsey, garden club member and co-chair of the Youth Projects Committee with Garone, is responsible for delivering mini-horticulture lessons. “They are really just some fun facts about the different vegetables and fruits that we are growing,” Dempsey says. “Both the adults and kids have learned some pretty interesting tidbits about various plants.”

Dempsey features a different vegetable each week; talks about where in the world it was first grown, what type of vegetable it is, how it is planted, and a little about how it is cooked and used; and, if appropriate, offers samples for tasting.

Club members also talk to the kids about nutrition; teach how to plant seeds and nurture the growing plants; and show how to harvest the produce. “Sometimes, I throw in some simple
science—like what phototropism is and how and why it works, or principles of pollination and why our pollinators are so important,” Dempsey says. “The kids seem to comprehend and remember much of what is discussed—maybe it's the fresh air or that they are witnessing the principles of nature in the garden.”

Garden club members help the children learn about good and bad bugs in the garden, where only organic methods are used. “The children find this fun,” says Susan Davis, a volunteer and garden club past president. “We teach them how to pick off the bad bugs. They get especially excited about hunting for the tomato hornworm—a huge green thing that either fascinates or repels them. The worm is the same color as the tomato leaves, and their young eyes are sharper than ours!”

The gardening program is open to any child enrolled in the Boys & Girls Club of Greater Derry. In the summer, three hundred children can be in attendance so participation in the garden may be limited by the desired ratio of between three and five children to each adult, depending on the chore for that day.

Often the children are invited to help in the garden by age group. Sometimes the experienced older kids act as guides for the younger ones. “The kids are usually in the garden weekly,” Garone says. “Although during planting season, it might be more often and weather is always a factor.”

It takes many willing volunteers to keep things running smoothly. Derry Garden Club members are notified by email about the day, time and activity planned. During the school year, the time is set for late afternoon after homework is done. In the summer, work begins at 9 a.m. before it gets too hot. Club members also try to take advantage of early release days and school vacations.

“Blanche and I are at the garden doing something just about every other day,” Dempsey says. “A thirty-foot-by-sixty-foot garden is a big garden to maintain. Fortunately, we don't do it alone. We have a core group of Derry Garden Club volunteers who help out every week with the kids in the garden. On some occasions, we have had more than thirty kids working in the garden at one time.”

It takes a village 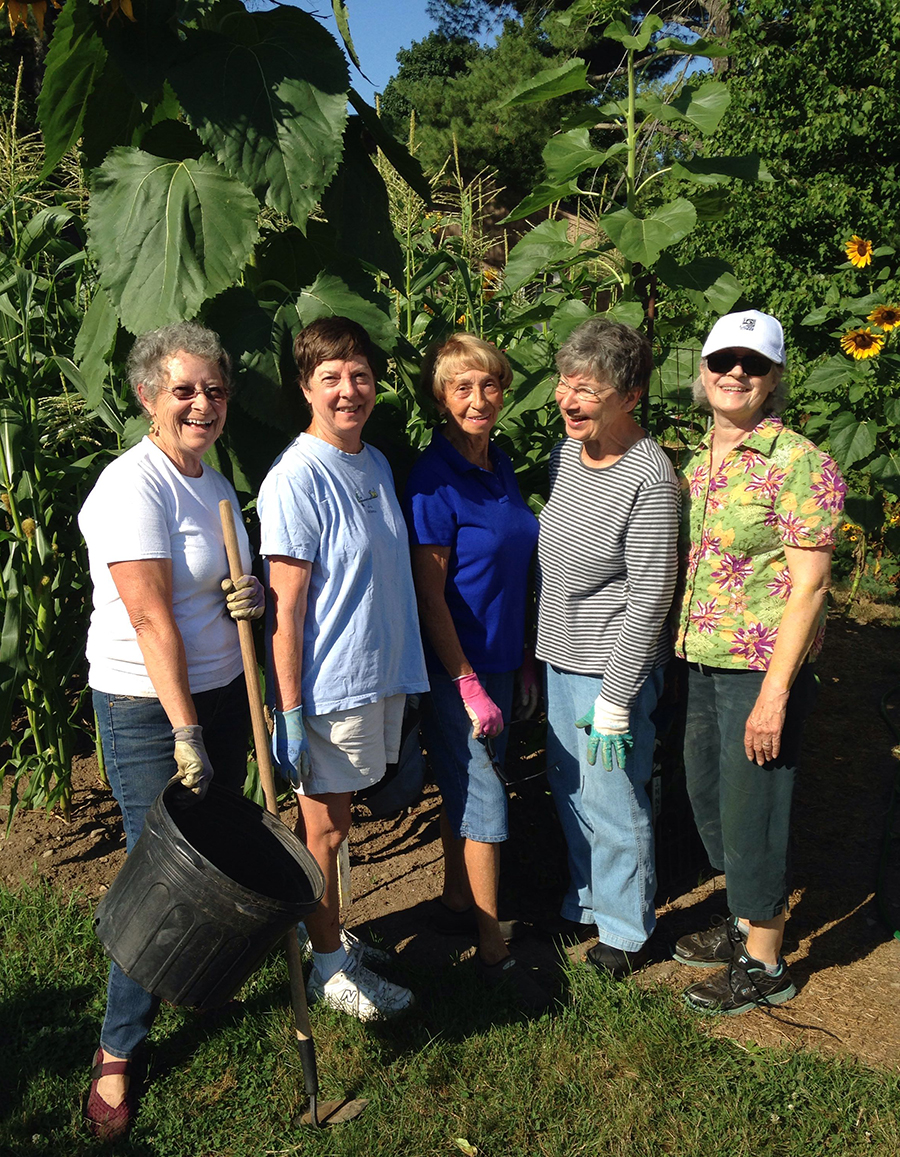 Derry Garden Club members—from the left, Blanche Garone, Corinne Safron, Wanda Desaulniers, Edith Nunn and Jackie Dempsey—put in many volunteer hours at the Derry Youth Garden. Even though it is hard work, they all say they get a lot of joy out of it.

The Derry Garden Club, which is also a member of the New Hampshire Federation of Garden Clubs as well as the New England Region and National Garden Clubs, Inc., donates money to the program. “We develop a wish list in late winter and want to grow what our gardeners will eat,” Garone says. Local growers give the garden club members a discount, and one of the members has donated seeds and plants he started. Manure for the garden is also donated. When more funding is needed, the Boys & Girls Club may apply for a grant; the garden club has received a grant in the past from the New Hampshire Master Gardeners Association.

Garden-based nutrition-intervention programs have been shown to increase fruit and vegetable consumption. Garone frequently whips up some tasty treats made from produce harvested from the garden.

“Because our garden is pesticide free,” Dempsey says, “we cut up samples of many of the vegetables just picked from the garden and allow the kids to munch as they pick. For some of our young gardeners, it might be the first time they have tasted an orange cherry tomato or raw green beans or snap peas. Zucchini brownies and strawberry sorbet are favorites every summer.”

There are two peach trees near the side entrance; some blueberry bushes were planted behind the garden shed. The garden is home to flowers as well as fruits and veggies. Once the produce is picked, it is placed inside the entry for parents to take home. At the end of the growing season, the club does a tasting meal showcasing the food they have grown.

A garden of hope

“I feel like our program is very successful,” Garone says. “The young gardeners enjoy themselves and gardening, and the volunteers also get joy from working with the children.”

“It is very rewarding working with the children in the garden. Regardless of their age, they do accomplish a great deal. Most are very willing and eager
to learn and help,” says club member Kaye Nugent.

Derry Garden Club President Suzanne Dustin gets a kick out of volunteering at the garden. “I am a senior citizen, and I love going to the Boys & Girls Club and teaching the children about gardening. They get so excited about planting a seed and then picking what they have grown!” she says. “The children are very proud that they can bring the veggies home to their families.”

Some kids have been involved every year, while others move on to different activities as they get older. “We still struggle to involve the older youth,” Garone says. “It seems as they get older, gardening isn’t so cool anymore. They do remember working in the garden, as they have mentioned to me and the other volunteers. With that in mind, we hope that eventually they will become gardeners again.”

McLean has seen the positive effects in kids who have worked with the Derry Garden Club. “The kids love working outside in the garden, and they develop great relationships with the volunteers,” he says. “Many of these kids live in apartments, and are not exposed to gardens or fresh vegetables. It is amazing to watch them interacting with and learning from the Derry Garden Club volunteers.”

Experience is the best teacher, and program participants are able to learn where food comes from first hand. By sharing their enthusiasm for gardening, Derry Garden Club members are planting seeds that could blossom into a lifelong love of gardening and nature in children who might otherwise not have been exposed to these ideas.

“Our hope is that we are creating a positive, memorable gardening experience for our kids,” Dempsey says, “that they will appreciate the importance and value of growing food, and that they will become responsible future stewards of the earth.” 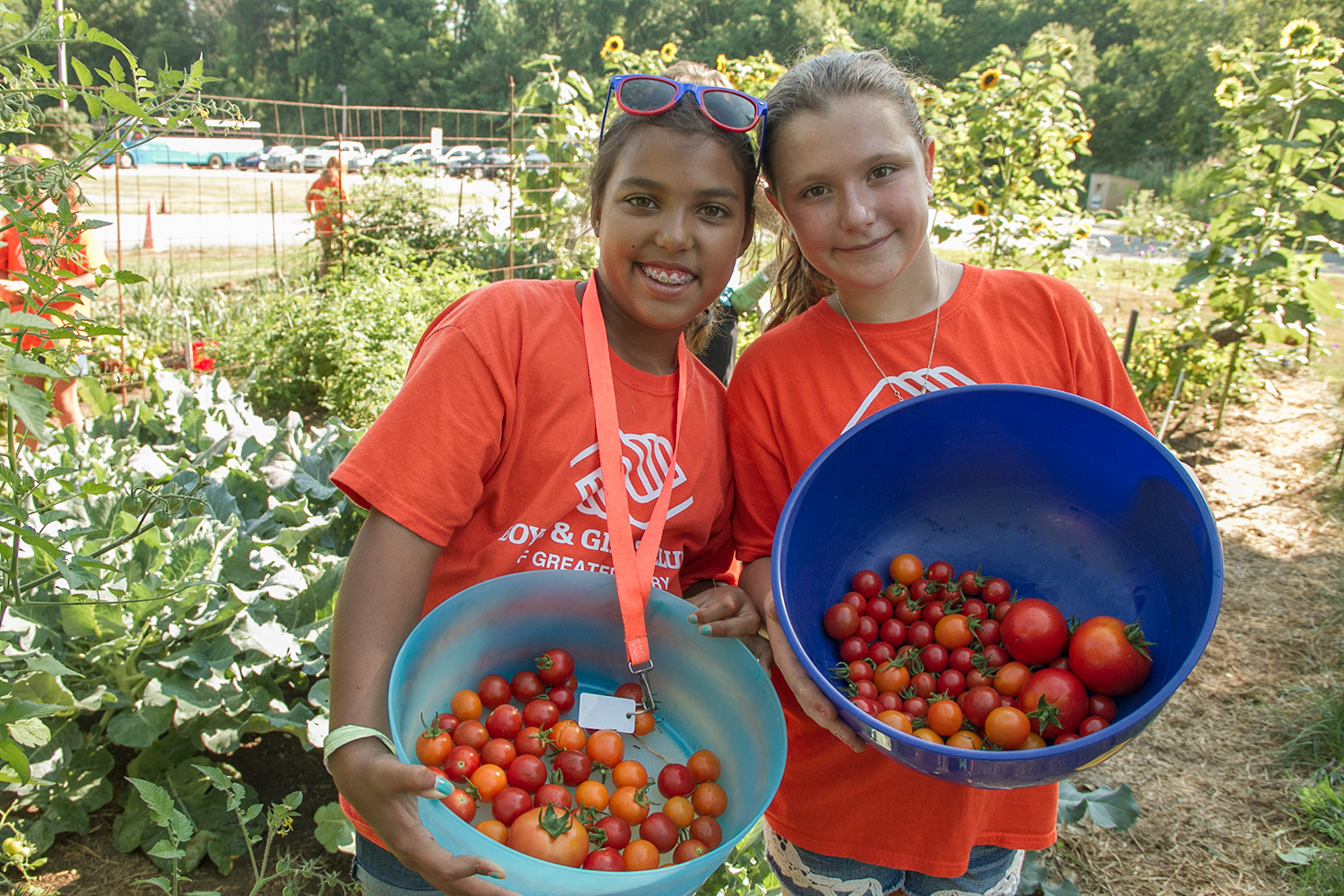 Angelina Martinez (left) and Skyla Theriault picked some tomatoes to share at lunch. This is the kind of “fast food” the project is hoping to encourage children to eat. 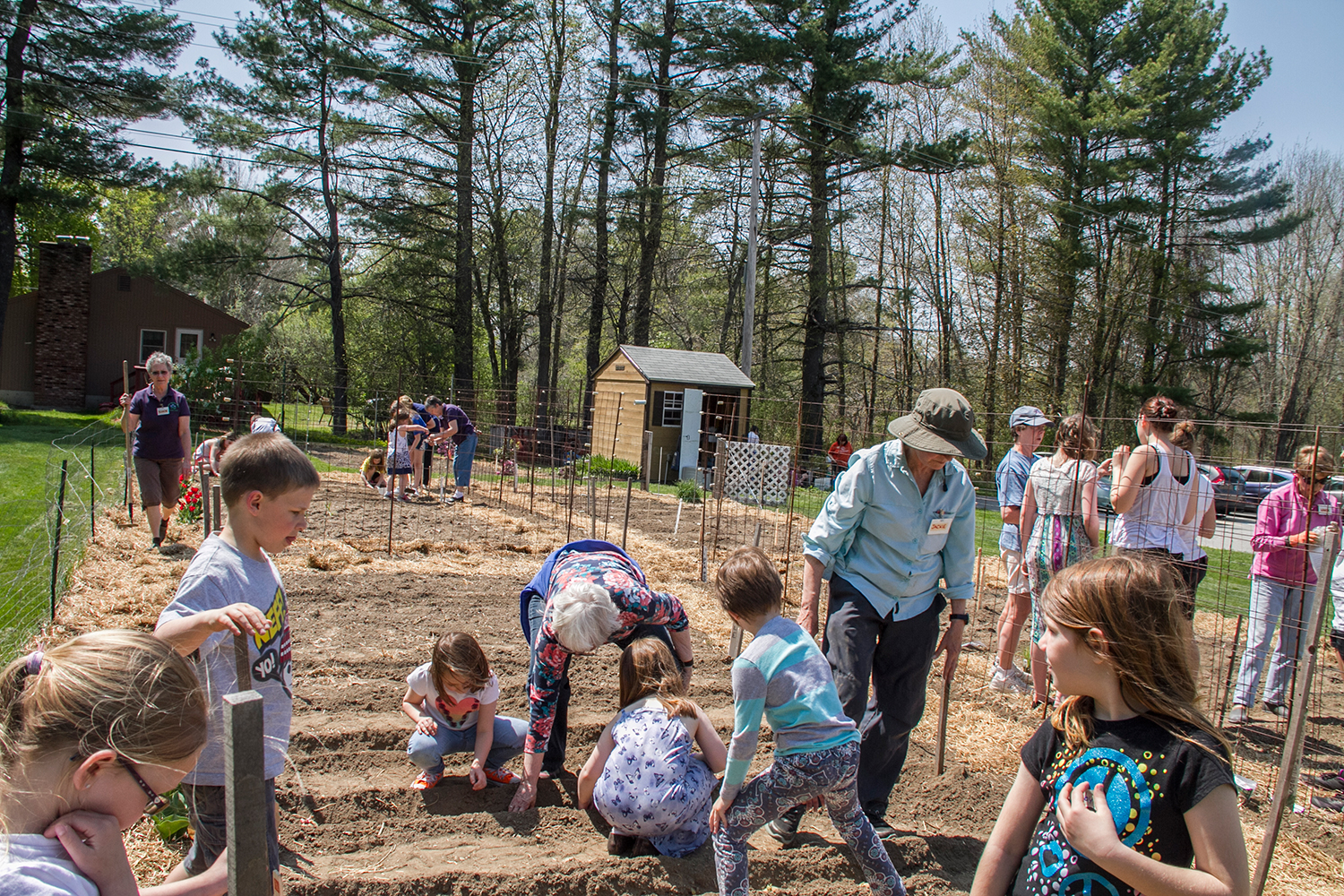 Many hands are needed to get the garden started. Volunteers work closely with the children, letting them have fun and get dirty while teaching what a successful garden needs. 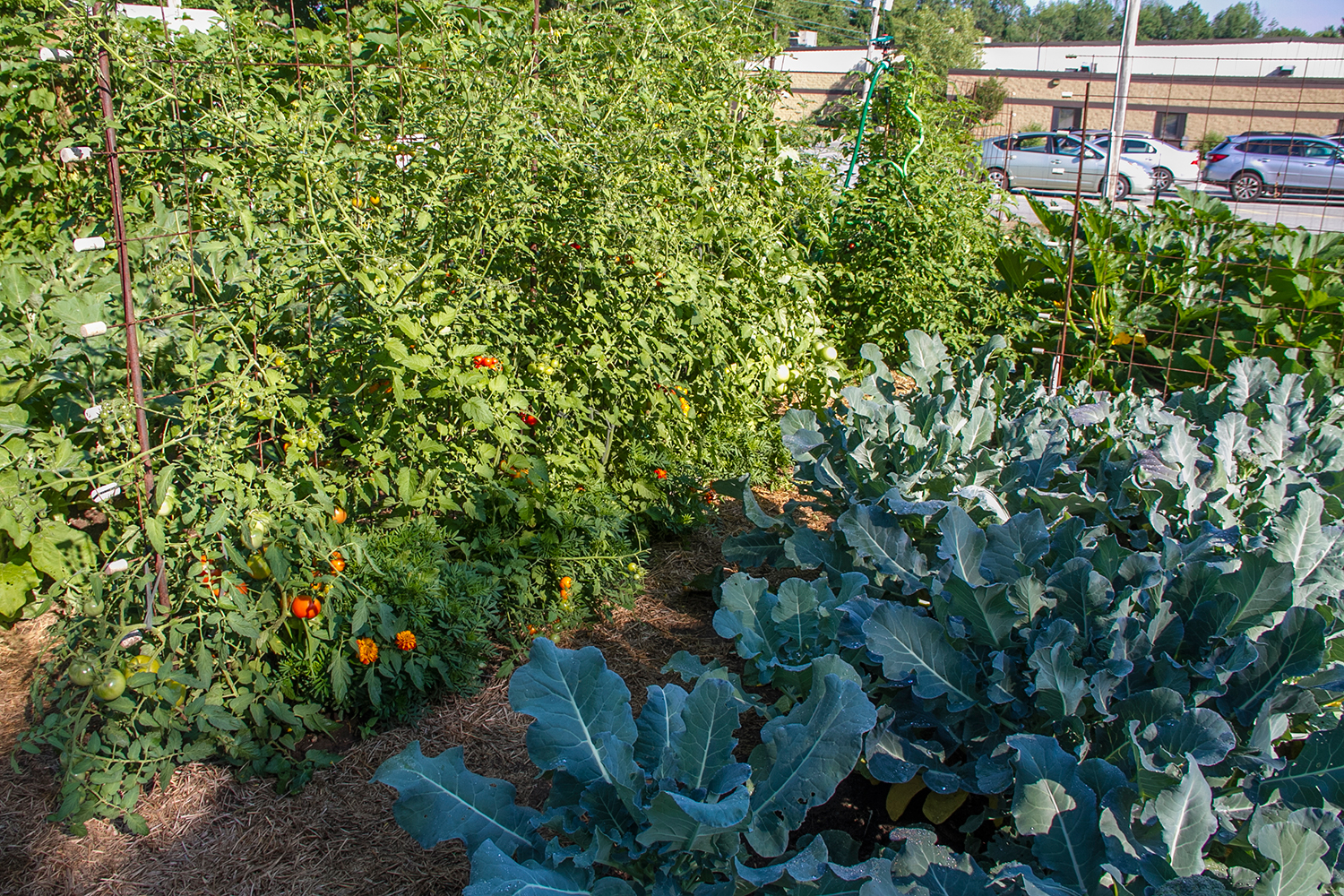 The lush growth in this well-tended plot is proof that the gardening lessons learned by the children are taking root.