Public gardens are the beautiful result from the dedication and efforts of many.

The public gardens in Peterborough are an excellent example of a public/private partnership. Town funds, grant money and a private endowment provide the funding, while town workers and volunteers—led by Peterborough Parks Committee members and accomplished gardeners Michael Gordon, Maude Odgers and Terry Reeves—provide the manpower and expertise.

Gordon says he was inspired back in 1997 by the work of public garden designer Lynden B. Miller, who restored and designed many parks and public spaces around New York City. “I thought that it would be fun to do here,” Gordon says, “even though we are not urban. [Miller’s] message to me was to take on only what you can maintain at the highest level, make it gorgeous and keep it that way. That is what we try to do here.”

Gordon, Odgers and Reeves started with Putnam Park, an existing park and the oldest one in town. It was deeded to the town for a park in 1862 and redesigned in the 1950s. Putnam Park had become neglected and overgrown, so the Parks Committee rejuvenated the space by cutting back and removing some trees and shrubs as well as adding new plantings and seating.

Gordon designed a signature Adirondack chair, with the Peterborough town seal on the back, to be used in all the parks. “It has extra wide arms to hold your lunch and is very comfortable,” he says. The chairs were built specially for the town by Scott Masi of York, Maine. They are not chained down and people are free to move them around as they need for comfort, but every morning, the town crew puts the chairs back in their original locations.

In 2000, Gordon and former Parks Committee Chairperson Carmen DuHaime approached then Town Administrator Pam Brenner with their ideas for an entry garden leading to the pavilion at Depot Park. “They had such great results with the other park that we were all for it,” Brenner says. “The town is very fortunate to have people who are so knowledgeable and passionate about gardening, and are willing to share that love with us.

“Our relationship has morphed into a public/private partnership that is working very well,” Brenner continues, “and the committee has gone on to build several more parks in town.” One of those is the Boccelli Garden.

This garden is located on a triangular half-acre lot on Grove Street across from Putnam Park. The town acquired the lot in 1983 and tore down the dilapidated buildings that were there. When Gordon proposed a garden for the lot, the plans were accepted by the town. Gordie Young of the Peterborough Public Works Department brought in the backhoe to dig out two feet of rubble from the area that was once one of the property’s driveways, replacing it with loam and manure. Young used granite slabs from the foundation of the old house to edge the front of garden bed and built a granite retaining wall at the rear of the bed. The Parks Committee supplied two antique, granite posts, which were placed at the front corners of the garden.

Gordon designed the sixteen-by-sixty-foot mixed border, and it was planted by the Parks Committee and their group of volunteers. “The garden needed to look good in all four seasons,” Gordon says. “Since winters are so long here, we started with plants that would be attractive even with no leaves or flowers.”

Gordon plays with foliage color, size and texture, mixing grays, reds and chartreuses with the greens for contrast, giving the garden rhythm. Tulips and other bulbs, along with hellebores and epimediums, start the spring color parade. Flowering shrubs go in and out of bloom as the seasons change and make the garden sing. Annuals and perennials are planted between the shrubs and along the front of the border as eye-candy, adding season-long color.

The garden was named in honor of Michael and Maria Boccelli, Italian immigrants who lived on the site and ran a boarding house there during the Depression. The large apple tree on the property was planted by Michael Boccelli. 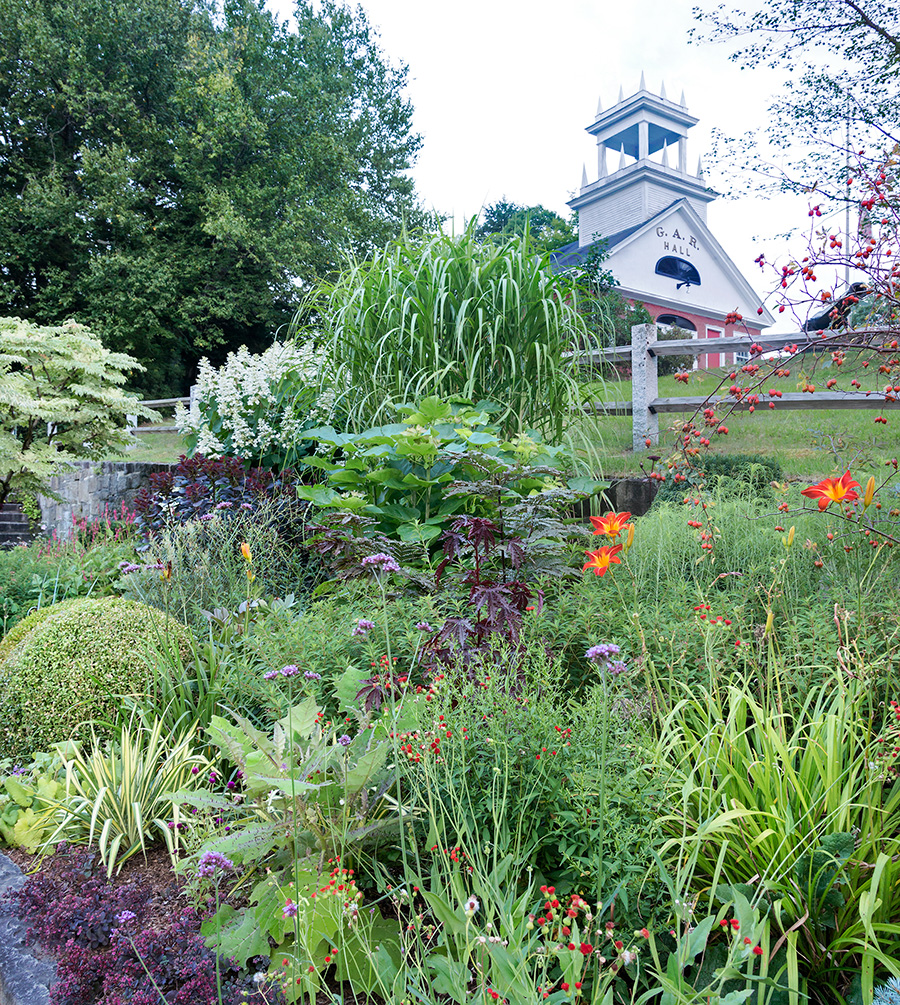 It is a spectacular garden, but something was lacking. “People rarely walked along the whole length of it,” Odgers says. “They needed a reason to walk down to the end, a destination.” To create one, she proposed a bluestone terrace at the end of the border farthest from the street. Overlooking the river, it would offer a quiet place to sit amid the gardens. An expansion project was begun, and the new terrace was built by Our Town Landscaping of Hancock.

Removal of brush along the riverside opened up the view of the park from town, and a rusty old chain-link fence along the river’s edge was replaced. The site was terraced, and the new garden area was planted with many of the same plants used in the border, tying the design together. A private donation paid for the new terrace and much of the plantings.

“The Parks Committee gets some town funding,” Brenner says. “They also are free to apply for a Goyette grant from a trust fund left to the town for the benefit of nonprofit groups, and they get money from the downtown TIF fund. TIF stands for tax increment financing. As property downtown is improved, part of the increase in their taxes goes into a fund to benefit the downtown area. In recent years, an endowment was also set up to enhance the public parks in town.”

As was the case with the addition to the Boccelli Garden, private donors also often contribute money. 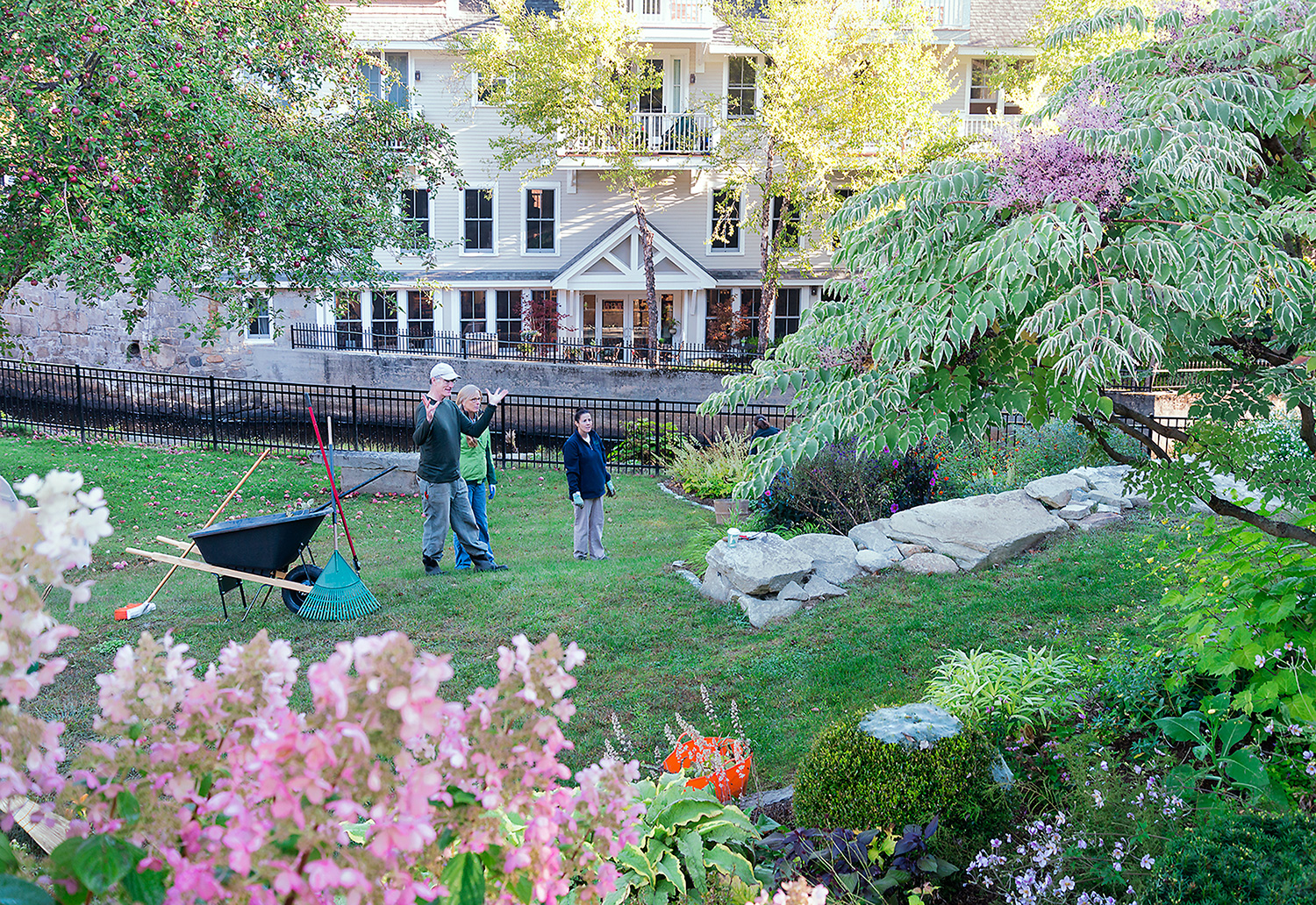 Michael Gordon and his crew assess the lower garden located below the new retaining wall. This garden shares many of the same plants that grow in the upper border, unifying the gardens as a whole.

From April through October, Gordon’s volunteers meet every Wednesday morning at 7 to maintain the parks. He sends out a heads-up email to let volunteers know the projects for the day. “I have to be careful, if I say we are moving rocks, no one will come!” he laughs. “Planting at the beginning of the season and weekly dead-heading are the favorite jobs.”

Each October, the volunteers have a celebratory lunch to talk about the gardens’ successes and challenges as well as to plan changes for next year.

Lenny Gonphier of the Town Buildings and Grounds Department does the heavy work moving stones, trees and mulch. “He’s my man!” says Gordon, “He does all the tough stuff.” Gonphier also hauls away the piles of dead-heads, leaves, and debris that need removal each week. The Peterborough Public Works Department guys keep newly planted gardens and lawn areas watered, and a part-time town crew does the mowing.

Volunteer Laura Trowbridge says that when her children were little, she watched as the gardens grew and was intrigued by their sophistication. “The plants they used were so interesting, and I wanted to learn more about them,” she says. As her kids got older and she had more time, she got involved with the group. “I have learned so much!” she says—and it shows in the gardens at her home in Dublin.

“The formula for our success has been: town support, volunteers who work to take it to a higher level and grants to fund the extras,” Gordon says. “Maintenance is key to a successful public garden.”

Other Community Gardens in New Hampshire 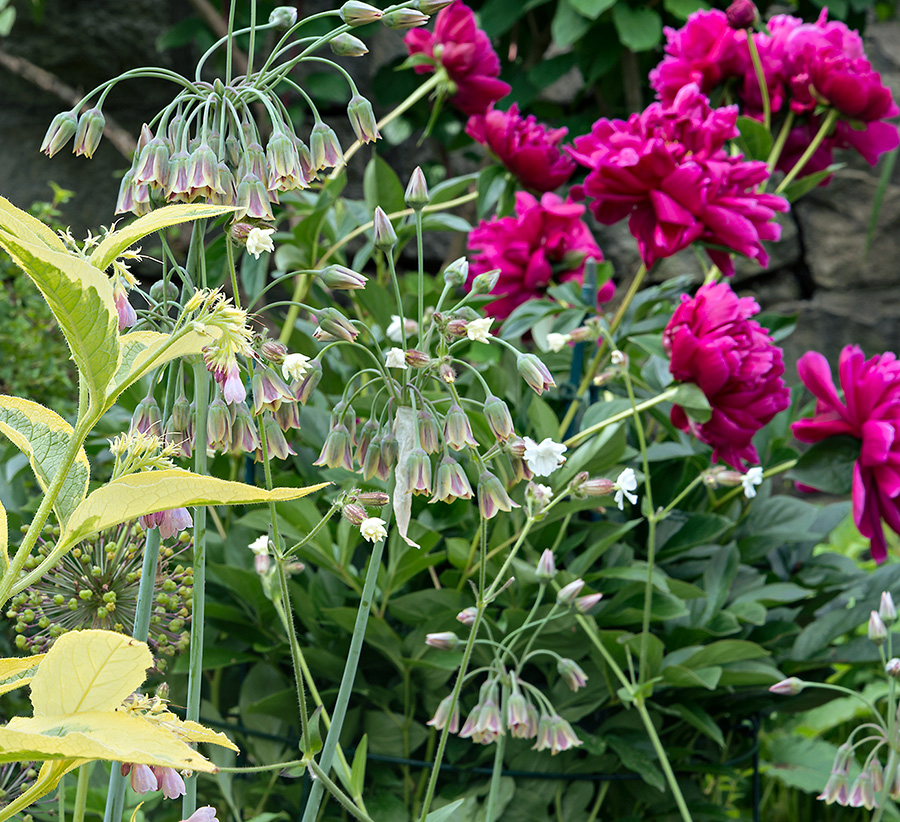 Many towns rely on volunteers to plant and maintain local parks and gardens. These collaborations build civic pride as well as foster teamwork between diverse groups and organizations as they beautify vacant lots and neglected public spaces. For example:

• In the town of Bow, members of the Bow Garden Club plant and maintain many gardens around town, including Rotary Park, the municipal building, the Old Town Hall and Baker Free Library.

• In Concord, members of the East Concord Garden Club and other volunteers maintain Pecker Park and are working to restore the landscaping around School House Hill.

• The Friends of Meredith Library plant and maintain the garden in front of the library each year. It is an All-America Selections (AAS) display garden that features the year’s AAS award-winning plants, and the garden itself has won awards for its design.

• Canillas Community Garden in Lebanon has brought together many members of the community to build, plant and maintain spaces used by gardeners ranging in age from seniors to preschoolers.

If you’d like to start a community garden in your town, check out a new publication from UNH Cooperative Extension called Community Gardening in NH: From the Ground Up. It can be found at www.extension.unh.edu/Gardens-Landscapes/StartingMaintaining-Community-Garden.