The library at Phillips Exeter Academy is a masterpiece that stands out as one of architect Louis Kahn’s finest buildings.

Most libraries I’ve worked in—with the exception of the magnificent Library of Congress in Washington, D.C.—are practical buildings when it comes to their appearance. They all have books and other materials at the ready, and provide a quiet place to sit down and get to work. They’re functional spaces, not places in which to admire aesthetics.

But that’s not the case with The Class of 1945 Library at Phillips Exeter Academy. Although the building is taller and has a more modern-looking façade than its neighbors (red-brick dorms and white clapboard houses along Front Street in Exeter), the real drama becomes apparent upon entering the building and ascending the curved, dual flight of travertine stairs to Rockefeller Hall at the main level. Looking up to the four levels above, you see each façade framed by a concrete plane out of which is cut an enormous circle. Each circle is transected by four courses of teak paneling, and high above floats a concrete cross brace illuminated by clerestory windows. Standing here, you realize what an awesome work of art this building is.

Designed by Louis Kahn, one of the great architects of the twentieth century, and completed in 1971, the library has been called a “cultural center and modern architectural masterpiece” by the American Institute of Architects. The organization conferred its Twenty-Five Year Award on the building in 1997 for “its outstanding collaboration of design and technology” and went on to say that the library “is artistically ahead of its time and will continue to enlighten as a spiritual touchstone of great design for generations of architects.”

The building committee at Phillips Exeter Academy commissioned Kahn to design a building whose emphasis was “not be on housing books but on housing readers using books,” and Kahn’s design is both practical and striking. He placed carrels on the outer periphery, so readers could enjoy both the views and natural light. “I made the inner depth of the building like a concrete doughnut, where the books are stored away from the light,” Kahn said in Architectural Forum in 1972. “The central area is the entrance where books are visible all around you through the big circular openings. So you feel the building has the invitation of books.” 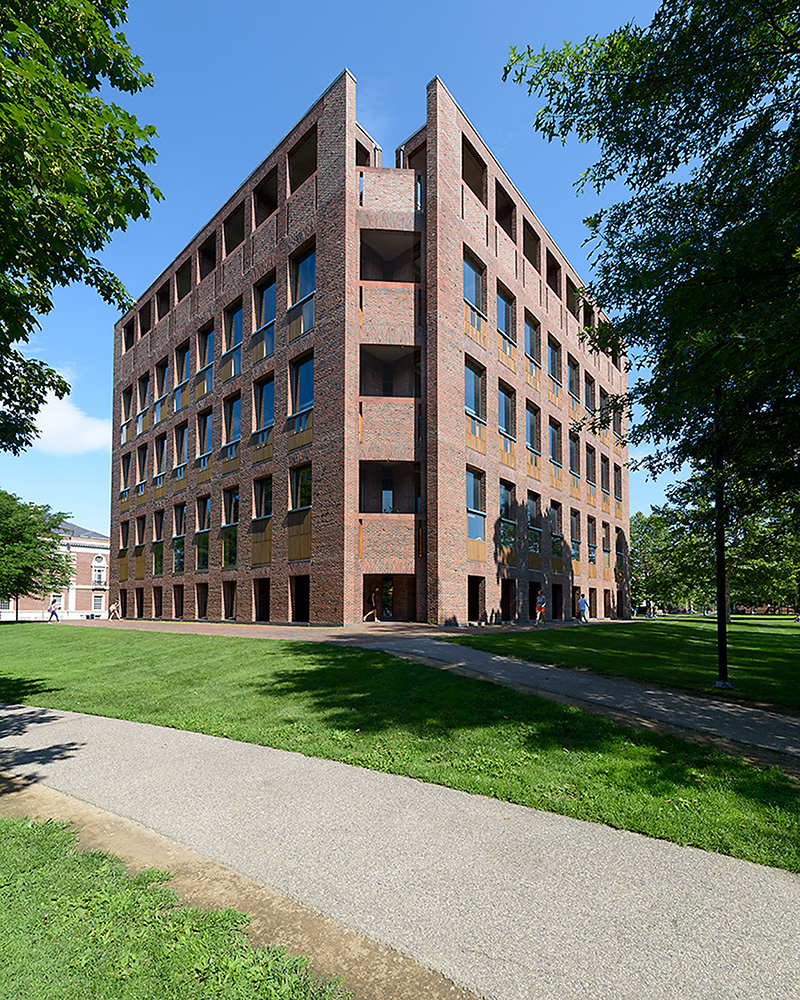 The magic of Kahn’s design is especially meaningful to Dan Scully of Daniel V. Scully Architects in Keene. During his summers in college and graduate school, Scully worked in Kahn’s Philadelphia office; Scully received a master of arts from Yale University in 1967, where his father, Vincent Scully, was the renowned, beloved and award-winning professor of the history of art and architecture as well as author of many architectural books. “The greatness of the library at Phillips Exeter is in the pure poetic joy of its geometry,” Dan says. “Kahn was a poet. But the building’s design is entirely appropriate to the solemnity of a library.”

While working for Kahn, Dan says he was immersed in making models of magnificent buildings. He saw how design refinements were made and buildings’ components kept evolving. “I saw how work gets better and better,” Dan says. “Kahn’s demand for excellence made him a profound artist. He was often the only one at the office at night, poring through books, and always learning and sketching from architecture and history.”

Not only is the library a masterpiece of architectural design—it’s also an extraordinary resource for the Phillips Exeter Academy community. As the largest secondary school library in the world, the library provides access to 260,000 print and electronic volumes, including one of the most valuable collections of rare books and original manuscripts of any secondary-school library in this country. There are 210 study carrels, as well as numerous reading lounges and long tables at which students can work together. The seating capacity of the library can accommodate nearly half the academy’s student population, which numbers nearly eleven hundred.

If you’re an aficionado of architecture, then you must see The Class of 1945 Library at Phillips Exeter Academy in person. The library is open Monday–Friday, from 7:30 a.m. to 9:30 p.m.; Saturday, from 9 a.m. to 4 p.m.; and Sunday, from 10 a.m. to 9 p.m. Visitors are asked to sign the register at the circulation desk on the main floor. To schedule a group visit, make arrangements with librarian Gail Scanlon (gscanlon@exeter.edu).

There are many books about Louis Kahn’s architecture, and one documentary that stands out for the riveting tale it tells. My Architect: A Son’s Journey (DVD, ASIN: B0006Q93EM, 2006) was made by Nathanial Kahn and is his attempt to make sense of his father’s life. When Louis Kahn died in 1974, he left behind a monumental architectural legacy (he designed the Kimball Art Museum in Fort Worth, Texas, which Boston Globe architecture critic Robert Campbell called “the greatest American building of the second half of the twentieth century,” and the British Art Center at Yale University in New Haven, Connecticut, which professor Vincent Scully called “an enduring monument”). Louis Kahn’s death also revealed a secretive and complicated personal life. He had three children—one with his wife and two with women with whom he’d had long-term affairs—and Nathanial’s film is a journey to understand his father’s life and work.