Cherry trees flower in New Hampshire as a living memorial to the Portsmouth Peace Treaty and citizen diplomacy. 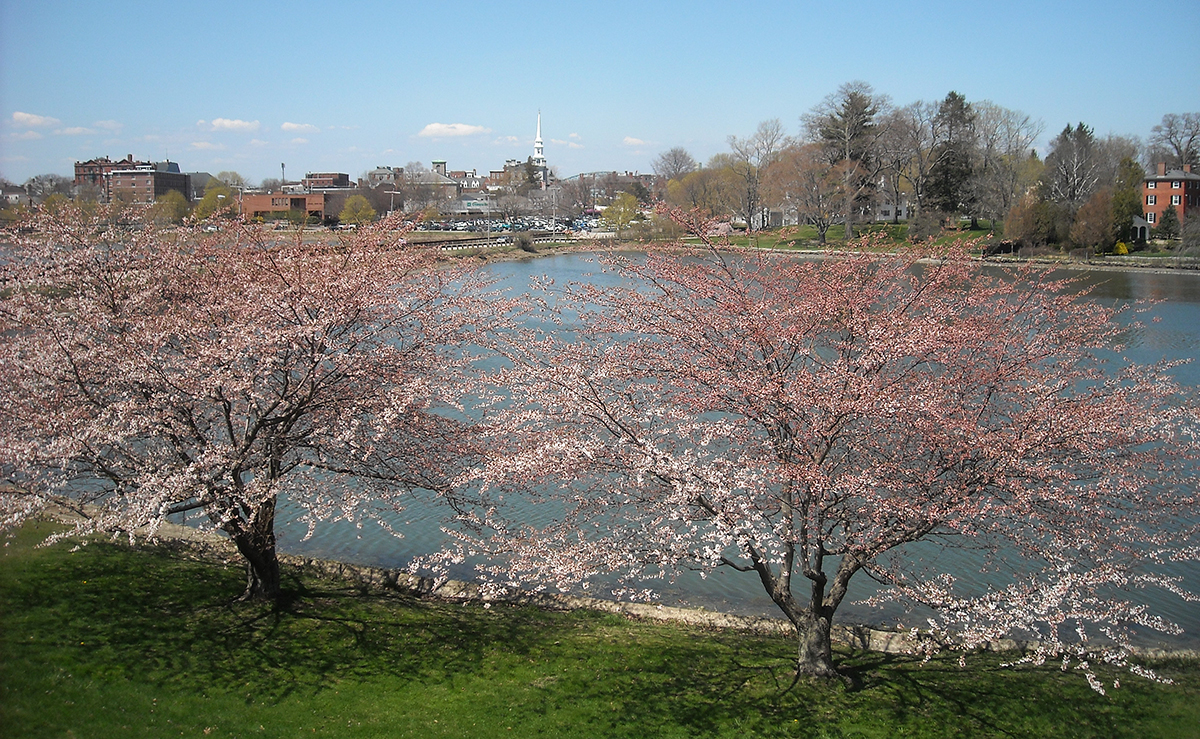 The cherry trees blooming around South Mill Pond in Portsmouth were a gift from Portsmouth’s sister city, Nichinan, Japan, in 1985.

Flowering shrubs and trees, such as lilacs and heirloom apples, around New Hampshire give the state its subtly beautiful “spring foliage” season as they unfurl their buds. Spring is also the time that towns across New Hampshire blossom with historical connections to some of the most famous flowering trees in America—the cherry trees in Washington, D.C.

The most prominent of New Hampshire’s cherry trees are the ones surrounding South Mill Pond and City Hall in Portsmouth. They were planted in 1985, thanks to a gift from Nichinan, Japan—Portsmouth’s sister city and the hometown of Baron Jutaro Komura, the lead Japanese diplomat at the 1905 peace conference that led to the Portsmouth Peace Treaty to end the Russo-Japanese War.

In 2012, on the centennial anniversary of the planting of the cherry trees in Washington, D.C., the Japan-America Society of New Hampshire learned that those trees were a direct result of the Portsmouth Peace Treaty, orchestrated by President Theodore Roosevelt. Yukio Ozaki, the then-mayor of Tokyo, organized the gift and wrote in his autobiography that he “always wanted to thank the U.S. for their help during the Russo-Japanese War.” 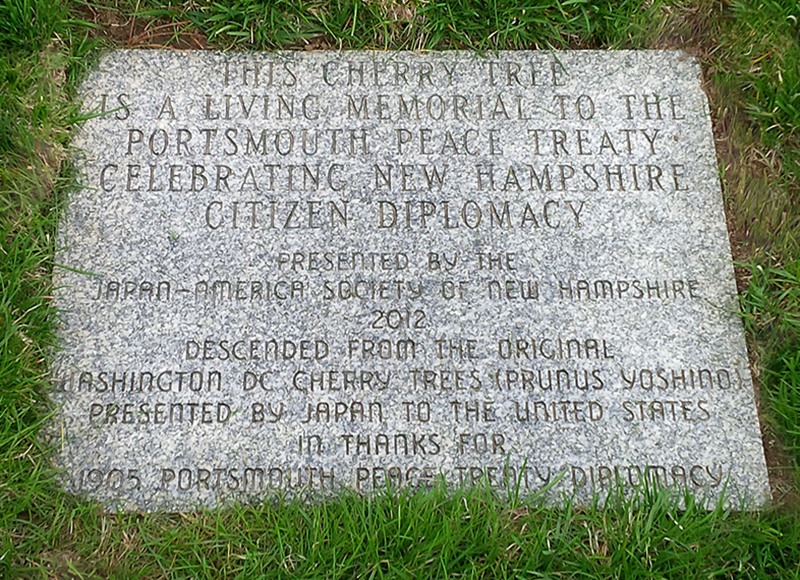 Because Portsmouth was so central to the original gift of the cherry trees in Washington, D.C., the Foreign Ministry of Japan in 2012 arranged for the Japan-America Society to receive a number of cherry trees descended from the Washington trees as part of the distribution of trees across America. The Japan-America Society of New Hampshire decided to plant those trees at key sites related to treaty history, creating a living memorial to the Portsmouth Peace Treaty and the citizen diplomacy involved in reaching its successful conclusion.

Since 2012, dozens of trees have been placed. Some were planted by Portsmouth Middle School students in front of their school and around the South Mill Pond. Every Portsmouth public school has a tree, as do the Wentworth By the Sea hotel, where the delegates stayed; the Portsmouth Naval Shipyard, where the treaty was signed; and Strawbery Banke Museum and Temple Israel in honor of local citizens who provided the hospitality that created “an atmosphere for peace.”

Other groups that enthusiastically welcomed cherry trees in 2015 include:

• The town of Hanover, sister city to Nihonmatsu, Japan, the hometown of Dartmouth College student Kan’ichi Asakawa, who wrote The Causes of the Russo-Japanese War and traveled to Portsmouth in 1905 to observe the peace conference.

• The Dublin Historical Society, which placed a tree outside their Schoolhouse Museum where a bench with the autograph of Japanese Baron Kentaro Kaneko is displayed. Kaneko, the U.S. public affairs representative during the war and negotiations, was friends through Roosevelt with Dublin residents Joseph Smith, a prominent artist, and his wife Corinna.

• The Friends of Stark Park in Manchester, which added a Living Memorial Cherry Tree to their arboretum. Baron Komura and Japanese newspapermen traveled to Manchester during the peace conference to tour the mills as guests of local businessmen and other dignitaries. 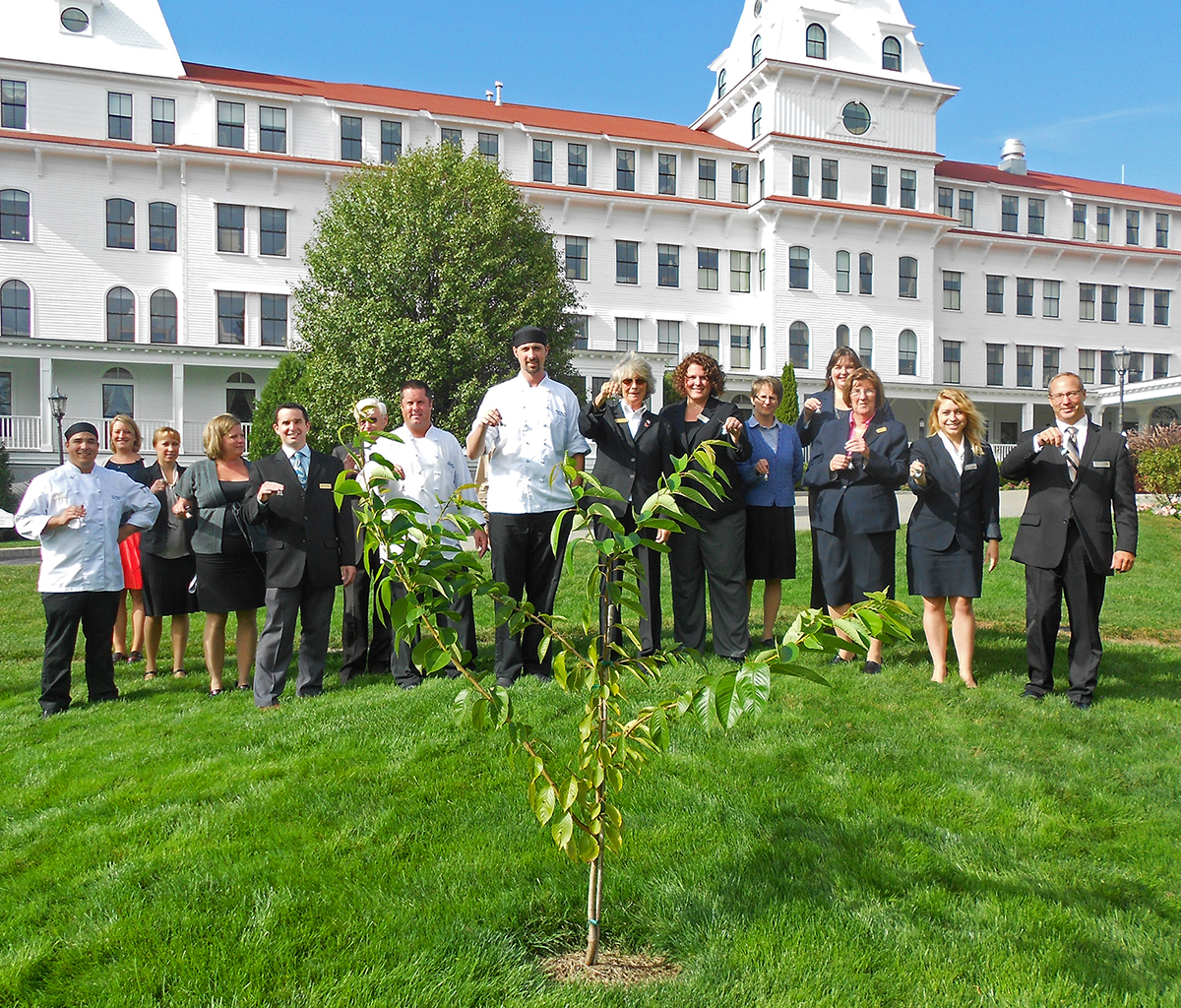 • The Weeks Public Library and Lancaster Historical Society, which planted a tree in Cross Park in honor of Henry Willard Denison. Denison grew up in Lancaster, worked at the Coos County Democrat and became the chief legal counsel to the Japanese Foreign Ministry, accompanying the Japanese delegation to Portsmouth in 1905.

• The Greater Meredith Program/town of Meredith, which planted a tree on the bank of Lake Winnipesaukee to remember Komura, who spent a summer between semesters at Harvard “rusticating” on a local farm. 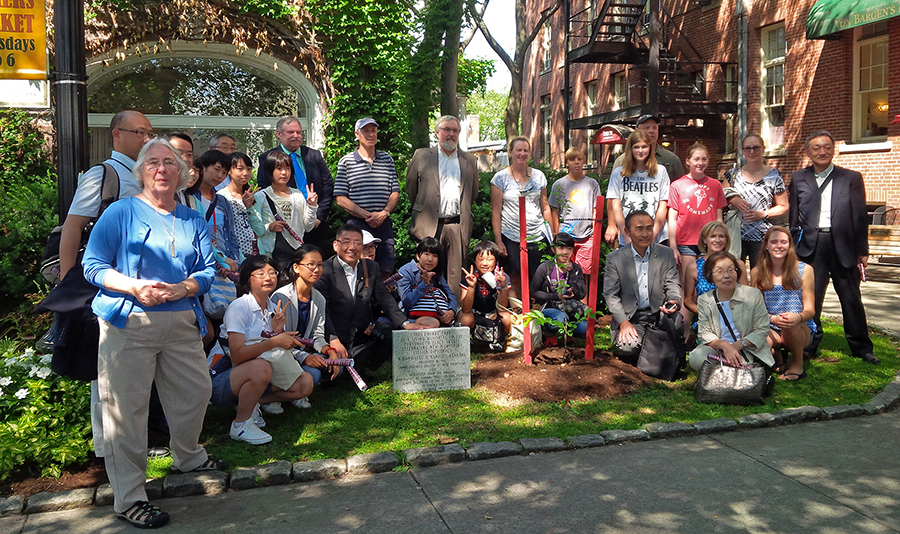 In 2015, students from Nihonmatsu, Japan, dedicated one of the cherry trees, planted outside the town hall in their sister city of Hanover.
Categories: Gardening & Landscape, Notable Homes & Homeowners