Thanks to two generous sisters with foresight and means, Prescott Park has become one of the linchpins of Portsmouth. 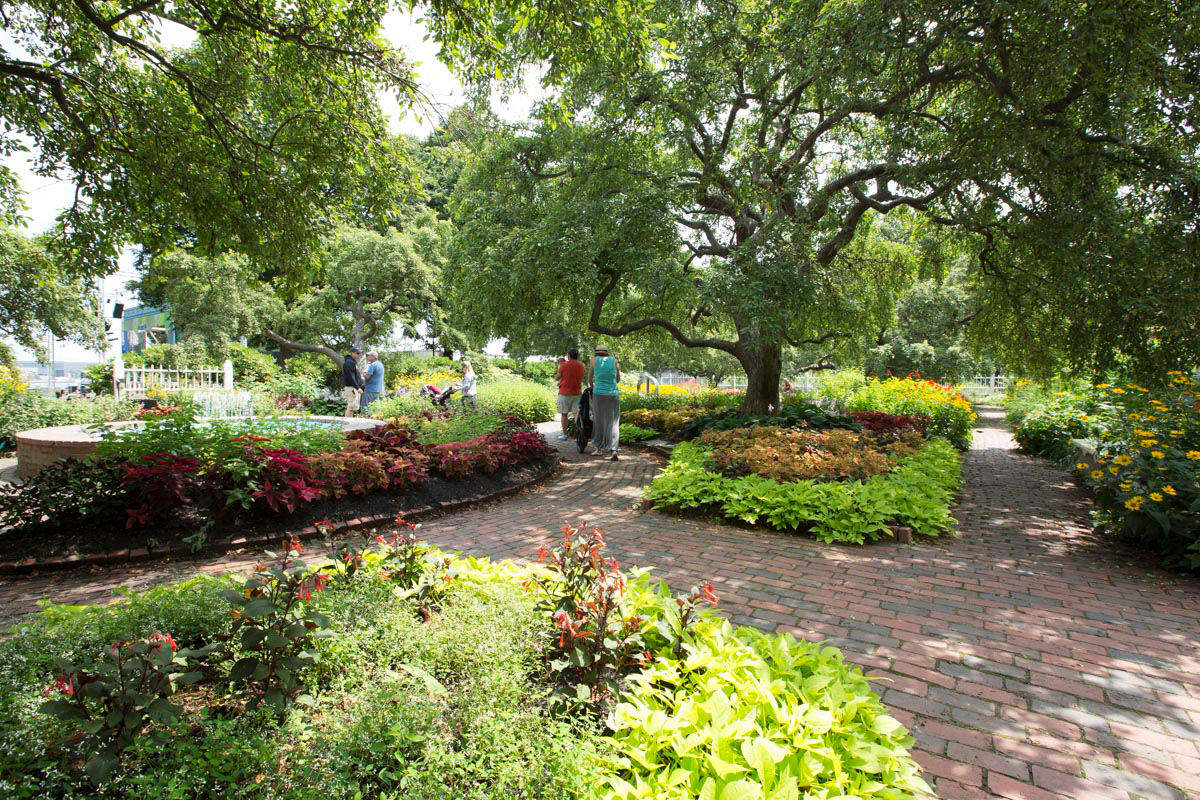 On your next trip to Portsmouth, take a relaxing stroll through the Josie Prescott Memorial Garden. Designed in 1965 by Moriece and Gary Inc. Landscape Architects of Cambridge, Massachusetts, the garden has matured into a horticultural masterpiece.

No trip to Portsmouth is complete without a visit to Prescott Park. Located on the waterfront across Marcy Street from Strawbery Banke, this ten-acre parcel of land once housed bustling warehouses and wharves. By the 1930s, the area had fallen on hard times, was quite rundown and had become home to the city’s notorious red-light district. Two local schoolteachers—sisters Josie and Mary Prescott, who had grown up in this neighborhood—had a dream of cleaning up and beautifying this section of town to create a park that would be open to everyone.

Josie, the youngest of the Prescott children, was born in a house on Marcy Street in 1858. The Prescott children attended public schools in Portsmouth, and the sisters went on to teach school there for a few years before moving to Boston to work. Their brother Charles also worked in Boston before heading to the booming city of Erie, Pennsylvania, and opening a dry-goods store with partner William Trask in 1877. Trask & Prescott was a huge success, and when Charles died in 1932, he left his sisters a large inheritance: $3 million. By that time, the sisters were in their seventies and had returned to Portsmouth. With the help of their lawyer, they began to buy derelict properties along the waterfront. 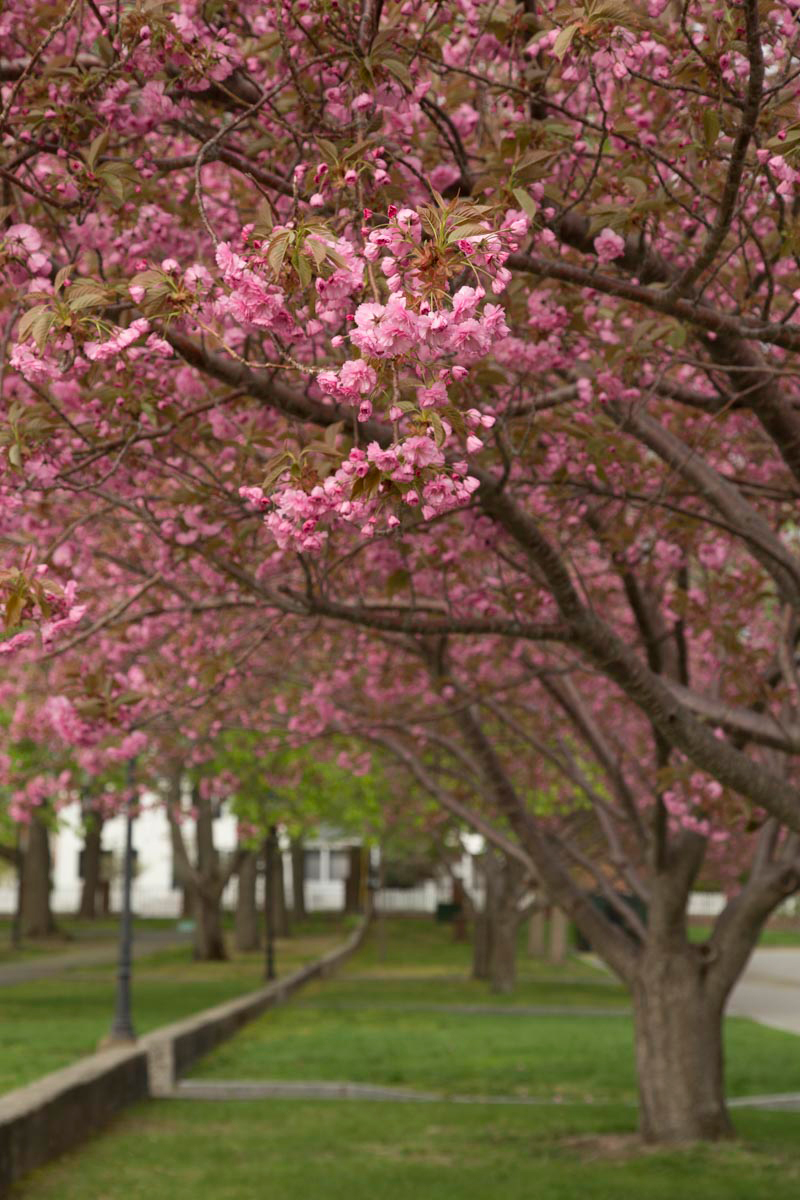 This row of flowering crabapples, whose colorful and fragrant blossoms buzz with bees, is a feast for the senses.

The first section of the park, closest to the Memorial Bridge, is now called the upper park. It was dedicated to Josie and Mary’s brother, Charles Smith Prescott, and presented without fanfare to the City of Portsmouth in 1939. The only stipulations were that it forever be used and improved as a public park, and that no alcoholic beverages be sold there. Mary died soon after, but Josie continued to acquire property to add to the park until her death in 1949 at the age of ninety-one. In her will, she created a trust fund to be used to buy more property along the Piscataqua River; that property was turned over to the city in 1954, along with the trust fund. This trust continues to be used for the management and maintenance of the park.

Today, Prescott Park includes the picnic area on Four Tree Island. The lower park has the trial gardens full of annuals that are well marked, giving visitors a chance to learn about new varieties, and is where the 1824 Liberty Pole still stands tall.

The center park has a stage and amphitheater where concerts and plays are put on in the summer months, and the Josie Prescott Memorial Garden, created in 1965; it provides a cooling respite from the heat and also has been the setting for many a wedding. There are several pier areas where visitors can enjoy views of the river.

The upper park has the parking lot, a municipal dock for public mooring of boats, a public forum area, the Emerson Hovey Fountain and the Whale Lawn, where Cabot Lyford’s sculpture of a whale looks out over the river.

Pick of the Planet
433-3370
www.pickoftheplanet.com

The Sheafe and Shaw warehouses are the oldest buildings in the park. The Sheafe Warehouse is a timber-frame building dating from 1700s that was moved to the park in 1940 from its original location near the Peirce Island Bridge. Each summer, it hosts the New Hampshire Art Association’s juried show. The three-story Shaw Warehouse dates from 1806 and occupies its original site. Today it houses the offices, garage, and shop space for the maintenance staff as well as the offices for the Trustees of Trust Funds and Prescott Park Arts Festival. The Marine Railway Building, which was added in 1985, houses the Players Ring Theater, a small nonprofit group.

Park Supervisor Michael Warhurst started his career at Prescott Park in 1975 as a work-study student for Dr. Charles Williams at the University of New Hampshire (UNH). At that time, Dr. Williams approached the trustees of the park with the idea of moving the All-American trial gardens that were located at the UNH horticultural farm in Madbury to Prescott Park. “He thought it would be excellent exposure for UNH and the public would benefit from looking at a living catalog of flowers,” Warhurst says.

They mapped out the trial gardens, rented a sod cutter and got to work creating about forty beds. “Back then, we would plant more than six hundred varieties of annuals, twenty-four plants per variety in the trial gardens,” he says.

After graduating from UNH, Warhurst stayed on at Prescott Park as a gardener, working for Park Supervisor Thurston Caswell. “He is a wonderful man who became my mentor,” Warhurst says. “I was lucky to be a part of Prescott Park in those early days and see the beginning of the arts festival. It was very exciting! The stage was being built, the Hovey fountain was being installed and Four Tree Island was coming together.”

Over the years, Warhurst worked with several other park supervisors, and in 1988, he took over the job. “I have given my heart and soul to Prescott Park, and I wouldn’t have done it any other way,” he says. “I love being in the park very early in the morning; when the plants are at their best and that soft light hits them, it is really like heaven.”

Warhurst has a crew of four or five workers to help him with the park. Even though the trial gardens are no longer associated with All-American Selections, Warhurst still continues a relationship with UNH, planting about thirty-two varieties from the All-American Selections seed collection grown for him by David Goudreault, greenhouse manager at UNH.

For the last ten or so years, the park has been purchasing all its plant material locally, from D.S. Cole Growers in Loudon, Pleasant View Gardens in Loudon, Wentworth Greenhouses in Rollinsford and Pick of the Planet in Greenland. All these establishments also donate a lot of plants. “Pick of the Planet takes it one step further,” Warhurst says. “Besides donating a large amount of plant material, they also design the front garden scene at the main entrance on Marcy Street and their staff works alongside ours to do the planting.” Birchwood Farms in Dover donated a collection of hostas that grow in one of the shady beds of the trial garden.

The displays are well marked, giving visitors a chance to see the All-American Selections for 2015: dianthus ‘Jolt Pink’, petunia ‘Tidal Wave Red Velour’, petunia ‘Trilogy Red’ and salvia ‘Summer Jewel White’. Check out the exciting forms of amaranths, ranging from the hot pink chenille tassels of love-lies-bleeding to tall Joseph’s coat types such as ‘Early Splendor’ and ‘Aurora’, to tidy round gomphrena in coppery orange, purple and strawberry red. 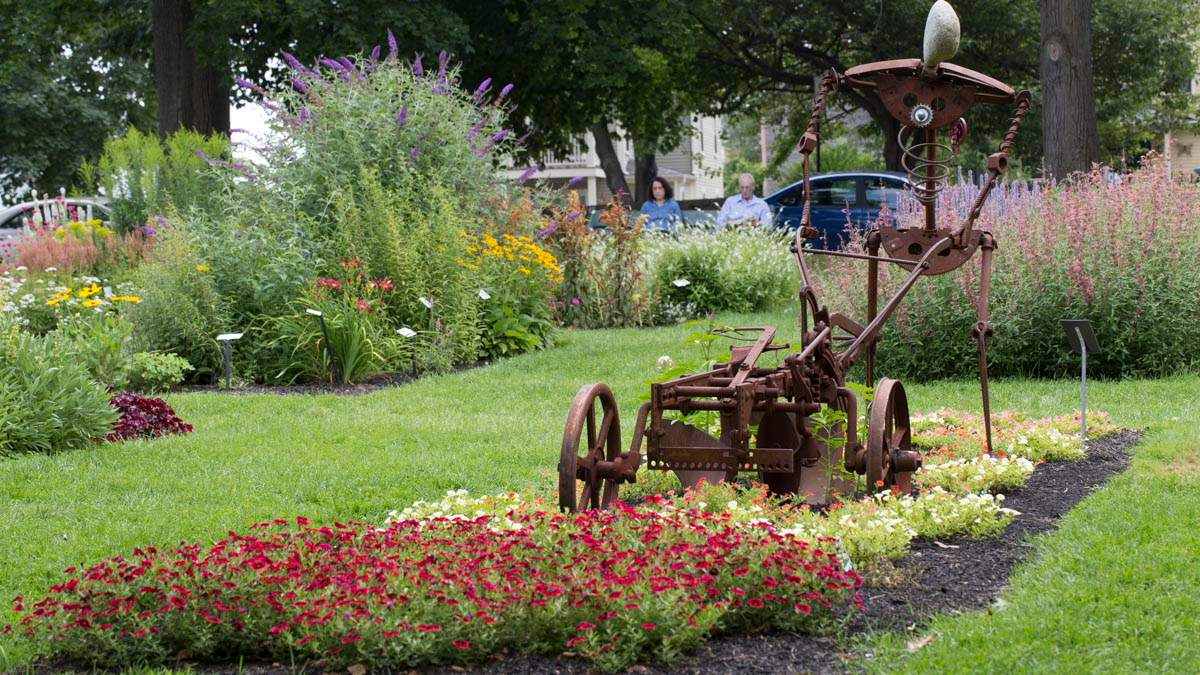 The Emaciated Gardener by Rick Burns diligently cultivates a field of calibrachoa in the trial garden. It is one of several temporary sculptures placed throughout the park, along with permanent stone sculptures Fisherman’s Luck and My Mother, the Wind by Cabot Lyford.

In the Josie Prescott Memorial Garden—a formal garden where mature specimens, including crab-apples, maples, gingko and magnolias, provide a bit of shade—park staff used to plant five thousand impatiens every year; unfortunately four years ago, the plants were decimated by an attack of downy mildew. “Now we utilize other shade-loving plants instead, such as euphorbia, fuchsia, coleus and plectranthus to name a few,” Warhurst says.

Color begins early in the spring with flowering bulbs such as daffodils, tulips and hyacinths. In the summer, sunnier areas of the formal garden are filled with tall ‘Southern Belle’ hibiscus growing along with rudbeckias, heliopsis, Siberian iris, buddleia, thalictrum, globe thistle, phlox and sedums. Brick paved pathways weave throughout the garden and connect the three circular pools—complete with fountains—to the flowerbeds. Surrounding the outside of the formal garden are rhododendrons, weeping katsura trees, Chinese fringe trees, stewartia, franklinia and little leaf lindens. The row of flowering crabapples is not to be missed when the trees blossom in the spring.

The Prescott Park Arts Festival presents a family-friendly musical production every summer. Last year it was Shrek, and this summer Peter Pan will fly across the main stage. Check out prescottpark.org for dates and times.

Next time you are in Portsmouth, walk the six blocks from Market Square to Prescott Park and try to envision what the area was like in Josie and Mary’s day—with rusting storage tanks and coal sheds, saloons and bawdy houses. Then enjoy the lush green lawns, artfully designed flower gardens and fresh sea air. “There would be no Prescott Park without the foresight and vision of the Prescott sisters,” Warhurst says.

The Prescott Park Arts Festival presents outdoor music, theater and dance performances as well as hosts special events in the park. This summer, be sure to catch the production of Peter Pan. For a schedule of events, call 603-436-2848 or visit prescottpark.org.

For more information on the park, Prescott Park has two websites: the official one is cityofportsmouth.com/prescottpark and the unofficial is prescottparknh.org. Both have lots of additional information and photographs.