Preserving the Legacy of The Fells

Ambassador John Milton Hay's opinion of Washington, D.C., was summarized quite succinctly when he explained to his close friend Theodore Roosevelt that "[t]his wordy city poisons men, who might be friends, against each other." All the more obvious then, why Hay chose to spend his free time in Newbury, at the summer home he dubbed "The Fells," named after the Scottish word for "rocky upland pastures."

The village of Newbury was a blessed refuge for Hay, the statesman, diplomat, author and journalist whose rise to prominence began when, at the age of twenty-two, he accepted a position as private secretary and assistant to Abraham Lincoln. In fact, Hay was at Lincoln's side when he succumbed to an assassin's bullet, but more than a mere witness

to history, Hay became a maker of history.

Hay served as U.S. ambassador to Great Britain as well as secretary of state under both William McKinley and Teddy Roosevelt. In addition to helping to negotiate the 1898 Treaty of Paris that ended the Spanish-American War-a conflict Hay once described to Roosevelt as "a splendid little war"-he was the driving force behind the adoption of the Open Door Policy in China and in fashioning a series of treaties that enabled the construction of the Panama Canal.

The construction of a somewhat modest cottage-which was designed by architect George F. Hammond, with a second soon to follow-at The Fells provided Hay with a beloved refuge from his many duties. 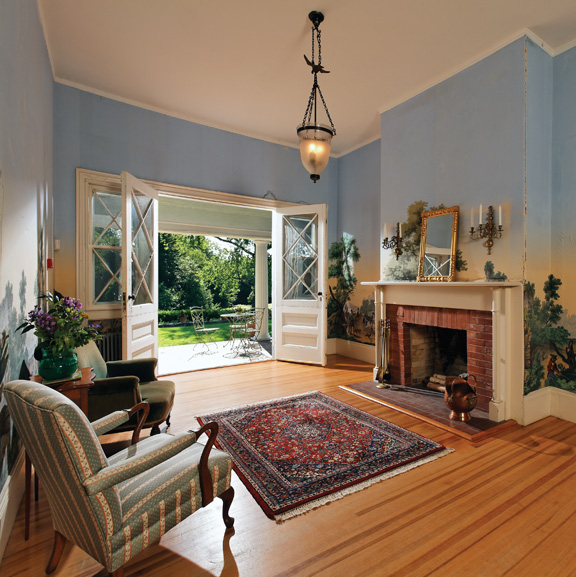 In the late 1800s, guests at The Fells would have entered through this door, the home’s original main entrance.

"For many years, John Hay suffered from an undiagnosed weakening illness," says Mary Kronenwetter, the former education director at the historic site. "That was one of the reasons he created the estate, so he could escape from the pressures of Washington."

Today, The Fells is a glorious example of what is known as "the New Hampshire Summer Home Movement." In total, Hay's estate consisted of one thousand acres on a hillside over looking Lake Sunapee, but when Hay arrived in 1888, it was just a scattered assemblage of abandoned farms. That year, Hay-with full encouragement from the State of New Hampshire-acquired seven contiguous tracts of land.

"Realize that this was shortly after the end of the Civil War, a post-Industrial Revolution period when the New Hampshire farm economy was declining rapidly," Kronenwetter explains. "The State of New Hampshire started publishing sophisticated advertising journals-the first real estate glossies, you might say-urging wealthy out-of-towners to come to New Hampshire and purchase these abandoned farms."

Also fueling the Summer Home Movement was the development of the railroad lines into the Connecticut River Valley.

"Tourism in this area of the state developed later than regions like the White Mountains, and that was because of the absence of the railroads here," says Karen Zurheide, who is executive director of The Fells. "It wasn't until 1870 that they created the train line through the Newbury Cut. The main reason that train line was put through was because of the Sugar River. 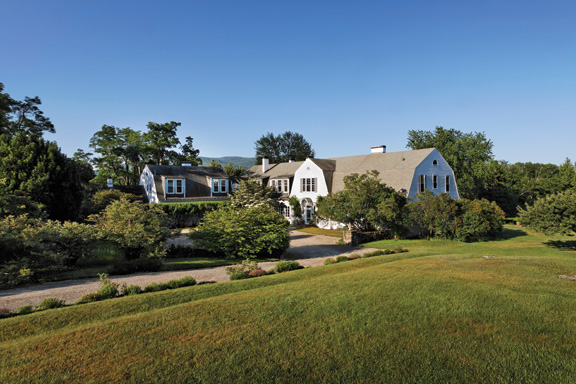 The twentieth-century entrance to the main house conveys just a hint of the grandeur of the summer home built by Abraham Lincoln’s aide John Milton Hay.

"The river is only twenty-seven miles long, but it drops eight hundred feet. That made Claremont a big manufacturing center, and the train was necessary to get raw materials in and finished goods out," she adds. "That was the push for getting that difficult portion of train track laid from Concord to Claremont. The offshoot was that it opened the region to tourism and summerhome owners."

Zurheide paints an idyllic word picture of steamboats carrying visitors-as many as five thousand per day-from the train station across the waters of Lake Sunapee to the many hotels and cottages that awaited their arrival.

Hay and his wife Clara were among those seasonal visitors, as were their daughters, Helen and Alice, and their sons Adelbert and Clarence.

Upon John Hay's death in 1905, The Fells was passed to Clarence Hay. During the next quarter-century, Clarence and his wife, Alice Appleton Hay, transformed The Fells into an exceptional American estate and working farm by remodeling the cottage into a stately Colonial Revival-style country home, thanks to help from local architect Prentice Sanger. The couple also expanded Clara's garden of roses and hydrangeas into terraced lawns and formal gardens.

Ever mindful of their responsibility as a steward of his father's legacy, in 1960, Clarence and his wife deeded most of the estate-675 acres east of Route 103A-to the Society for the Protection of New Hampshire Forests. In 1972, three years after Clarence's death, his widow deeded the remainder of the estate's 165 acres to the U.S. Fish and Wildlife Service as a wildlife sanctuary. The bulk of that land came into federal possession upon her death in 1987, but it wasn't until 2008 when The Fells-an independent, nonprofit organization that has managed the property since 1996-became the owners of the 84 acres that includes the historic buildings and gardens. 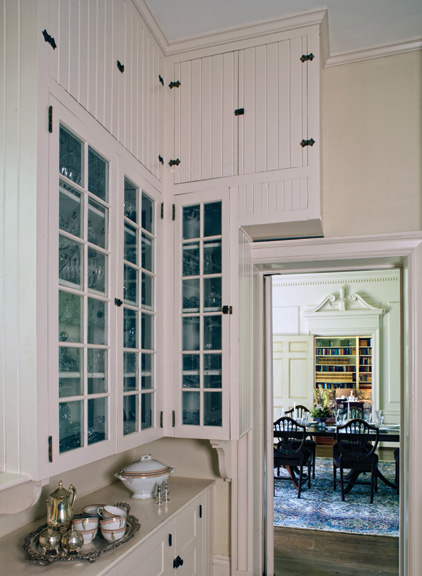 Glass-front cabinets in the pantry were designed for everyday dinnerware, while the enclosed cupboards above—literally the top shelf—were reserved for the Hays’ finest china.

"Prior to that, the roots of our organization really started with some local gardeners who were appalled that this property was being neglected under the federal stewardship," Zurheide says. "So local volunteers were allowed to come in and bring the gardens back.

"From that, they formed a nonprofit and got an agreement with the government to manage the property," she continues.

"Although we weren't getting any federal money for the years that we managed the gardens, we were putting small amounts into the property, but since we didn't own it, we didn't want to invest too much. Now that we do own it, we plan to do more with it and, hopefully, raise our profile.

"The process of rehabilitating those gardens, the grounds and the house has been slow but steady," Zurheide says, "and it's been accomplished on a modest budget with a great deal of volunteer time and talent-I'd say nearly 7,500 hours from more than three hundred people in 2010 alone-all being added to the work of our small professional staff.

"Each year, in addition to regular maintenance of the property, we make more progress that landscape director Jeff Good presides over," she adds. "The appearance of our 1909 Old Garden in the woods is changing from year to year, for instance, as we work to recover its 1930's look. In time, we also hope to complete renovation of our extensive alpine rock garden, which is being featured at the annual convention of the North American Rock Garden Society here in June."

The Fells also hosts school field trips, corporate retreats and even weddings. Although historic tours of the main house are suspended from Columbus Day weekend until Memorial Day, the gardens and trails are open every day of the year from dawn to dusk. Meanwhile, year-round instructional programs abound, with offerings that range from guided snowshoe hikes to home vegetable gardening, or from residential landscape design to rustic furniture workshops with artisans from the League of New Hampshire Craftsmen.

Always, there is the legacy of John Milton Hay. "This year is very significant in that regard because it is the 150th anniversary of the start of the Civil War," Kronenwetter says, "and we will be very involved in recognizing that sesquicentennial."

Among other events, on May 19, The Fells plans to sponsor the New Hampshire Towns and the Civil War lecture by Jere Daniel, professor emeritus of history at Dartmouth College. On June 26, The Fells plans to host a lecture by preeminent Lincoln and Hay scholar Michael Burlingame called A Look at Lincoln's Civil War White House Through the Diary and Letters of John Milton Hay, which coincides with the opening of a three-month standing exhibit called Civil War Sesquicentennial: Real History Is Told in Private Letters.

"In United States history, John Hay is remembered as a beloved statesman, but his stature as an author may be just as significant," Kronenwetter says. "He and a colleague, John Nicolay, wrote the original, comprehensive, ten-volume biography of Abraham Lincoln that remains an invaluable primary resource for Lincoln scholars to this day.

"The diaries Hay kept during the Civil War are also invaluable, plus he wrote poetry and a kind of narrative ballad that was popular at the time, and then there is the issue regarding authorship of some of Lincoln's speeches and the Bixby letter," she continues. The so-called Bixby letter-returned to notoriety in the 1998 film Saving Private Ryan-is the letter in which Lincoln sought to console a grieving mother from Boston whose five sons were thought to have "died gloriously on the field of battle" while fighting for the Union cause. Many scholars, such as Michael Burlingame, make the case that Hay was the author of that letter, as well as the vast majority of Lincoln's correspondence while in the White House.

Perhaps Hay discussed those rumors while at The Fells hosting contemporaries, who included sculptor Augustus Saint-Gaudens. He created the bust of Hay that graces the John Hay Memorial Library at Brown University in Rhode Island and the headstone that marks the Hay family plot in Cleveland, Ohio. Saint-Gaudens frequently made the carriage ride to Newbury from Aspet, his home and studio in nearby Cornish.

Just as Hay had celebrated friends-Mark Twain and Rudyard Kipling among them-he also has celebrated descendants. His grandchildren include John Hay Whitney, who was a U.S. ambassador to the United Kingdom and publisher of the New York Herald Tribune; Joan Whitney Payson, a philanthropist and patron of the arts who was also a co-founder and majority owner of Major League Baseball's New York Mets baseball franchise; and the late John Hay (he died in February at age ninety-five), the environmentalist and author who was hailed by Pulitzer Prizewinning environmental writer Annie Dillard as "one of the world's handful of very great nature writers."

It seems fitting that a Hay descendant would become one of America's great naturalists, and when John Hay (the younger) wrote about the days when he "walked the shores of the lake we summered by in New Hampshire," the lake he references is Lake Sunapee, site of an often-overlooked jewel known as The Fells.

"But it's not a good thing to be a hidden treasure," Zurheide says. "We don't want to be an undiscovered jewel. We want people to discover us, and we hope this is the year they do just that."