Ready for a New Century

A classic Shingle-Style house becomes an architect’s home for the long term. 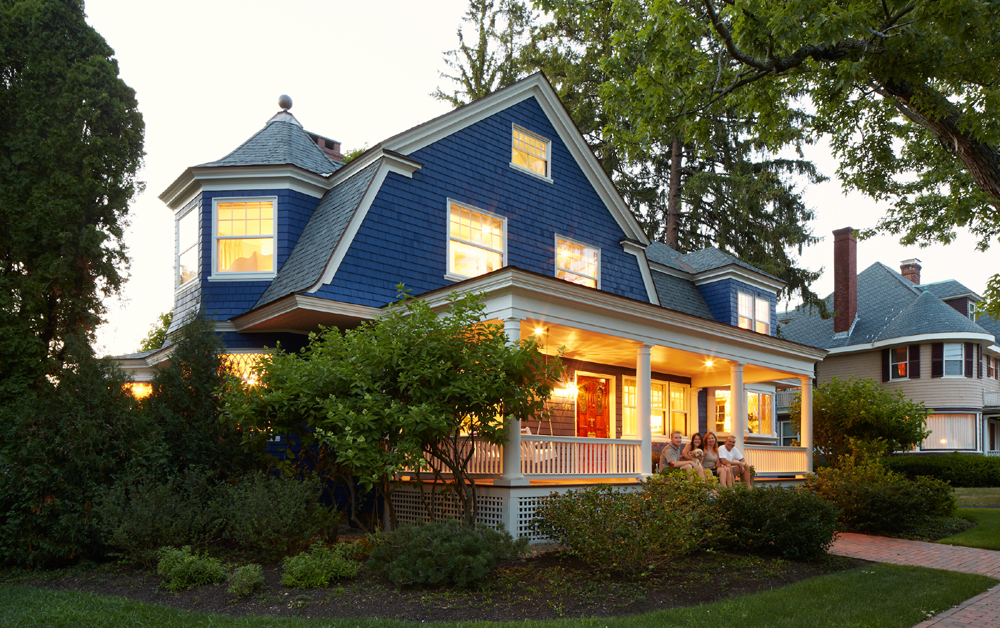 When the house on Middle Street came on the market, Portsmouth architect Lisa DeStefano knew it was something special. She knew of the house, having visited when it was the parsonage for her church. She had entered via the wide porch to the home’s dark-paneled interior, and seen its brick fireplaces, stained-glass windows, broad stairwell and formal dining room. Firsthand, she had experienced its old-fashioned graciousness.

Even casual observers were apt to stop and study the large, shingled house with its gambrel roof and wide porch glimpsed through the shrubbery. On the south side, a two-story tower with a modest finial signaled a bit of style; a quick glance down the driveway seemed to indicate a back porch as well.

“When my husband, Richard, and I visited the house as potential buyers, I knew immediately that we could do something,” DeStefano says. “My husband’s primary concern was that it function for our lifestyle.” 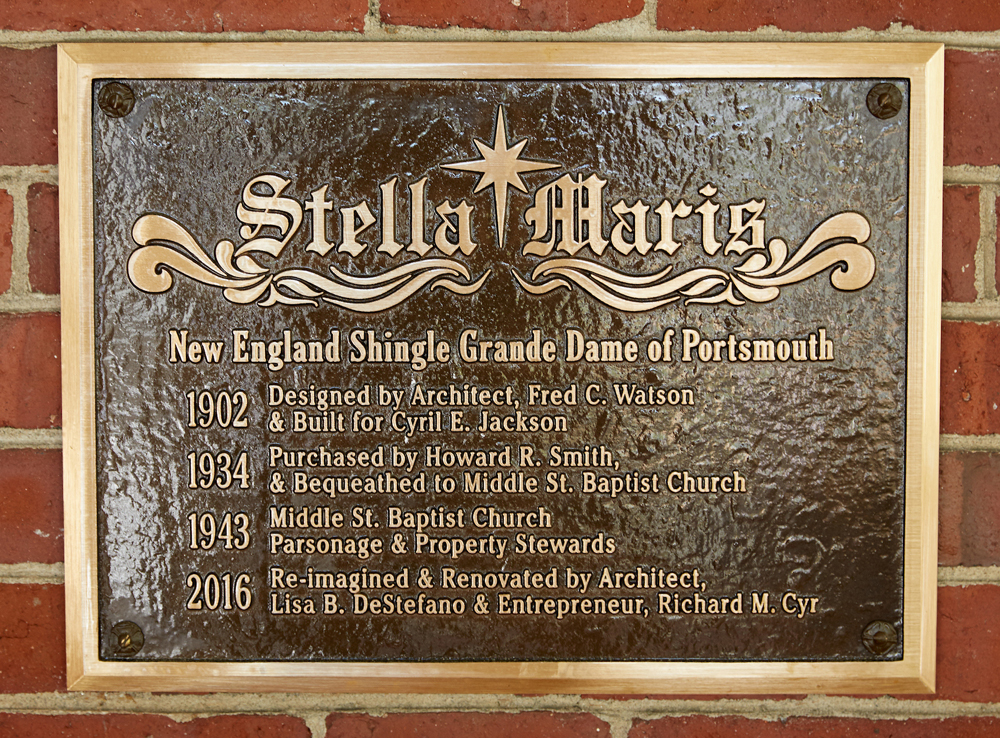 The home’s name, Stella Maris, means star of the sea. It references a star found in the home’s stained glass window located above the stairwell.

Where the house began

Built in 1902 as the summer home for stockbroker Cyril E. Jackson, the house was designed by Fred. Crowell Watson, whose credits included several summer homes in York, Maine. Plans for the house, published in 1907, listed it as “A Shingled House at Portsmouth, N.H.” Indeed the house was a “grand old lady” whose bold romantic details and modern lines had been blurred by time. However, the home’s interior preserved a more formal era with stunning clarity.

“The kitchen was in the back ell—not our lifestyle,” DeStefano says. “It was designed to accommodate a household cook. The old dining room even had a little round button to press with your foot to call for the next courses.

“The house was very dark inside due to its woodwork and trim. One of the things both my husband and I gravitate to is sunlight,” DeStefano continues. “Yet, it was important to us to keep the home’s character. We decided to paint the detailing a light color.”

After having their exterior plans approved by Portsmouth’s Historical Commission, one more hurdle remained before work began in earnest in the fall of 2015. “We had to preselect a paint color for the exterior,” DeStefano says, “because all the construction would be done in the winter.”

Traditionally, Shingle-Style homes by the ocean are dark brown or light gray. The original plans for this house recommended two shades of green. “We thought brown would be too scary for grandchildren,” DeStefano says. Taking their cue from the home’s stained-glass window, they chose a deep blueviolet. “As it turned out, we’ve loved how the color looked in the winter and spring,” she says. That window also has a small white star, which inspired the home’s name, “Stella Maris,” or star of the sea. 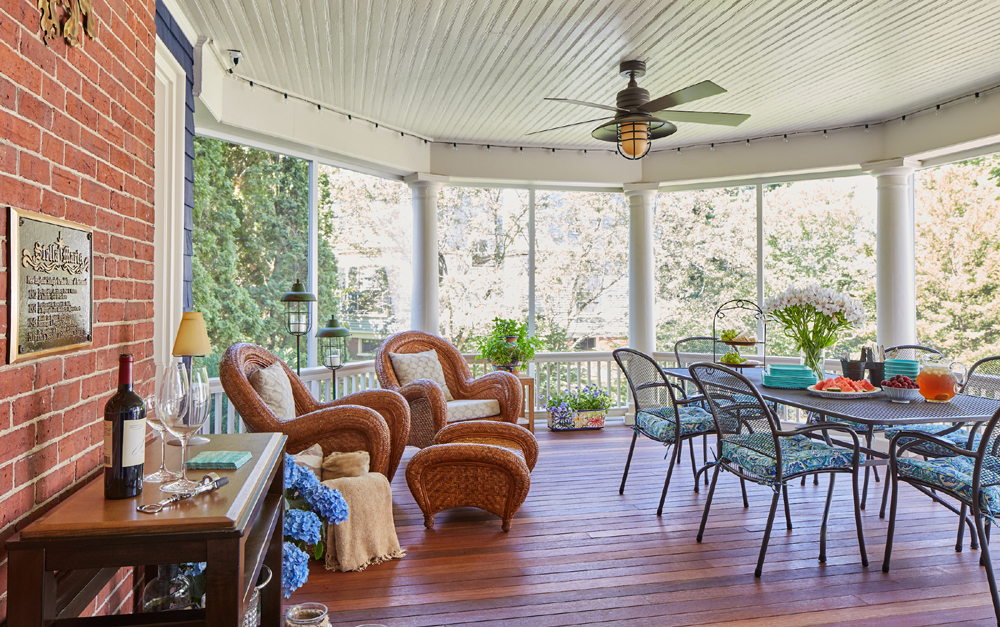 “We have an amazing quality of life thanks to this screened-in porch. We’ve spent many afternoons and evenings here with friends and family,” says architect and homeowner Lisa DeStefano.

In short order, DeStefano enlisted a trusted team of professionals she’s worked with for many years: contractor Daryl Kent of K&S Contracting in Portsmouth, interior designer Cicely Markoff of Cicely Markoff Interior Design in New London and landscape architect Robbi Woodburn of Woodburn and Associates in Newmarket. Construction began in mid-October with a move-in date of early April.

Kent chuckles when asked what he did on the house. Even though the footprint didn’t change, inside and out the whole house was “delicately renovated,” from top to bottom. As for the timeframe, Kent responds, “It’s all a matter of orchestration,” expedited, of course, by DeStefano’s meticulous plans. “It was a seamless renovation.”

Early morning sunlight creates a beautiful rainbow on the walls of the stairwell. This original stained-glass window gave the home its name, Stella Maris, or star of the sea.

The back stairs to the cook’s quarters were removed along with the back chimney. With this additional space on the second floor, a little bedroom was created, complete with builtins and extra outlets for electronics. In the master bedroom, a walk-in dressing room and master bathroom were added. A second-floor laundry was added as well.

On the first floor, the kitchen was moved to the front of the house. In the location of the old kitchen, a butler’s pantry and powder room were added. Tucked under the central stairwell in place of the old butler’s pantry, an office for DeStefano’s husband was created.

A wider, friendlier staircase to the basement provided access to newly functional space. There, the team poured a concrete floor, reworked a lot of the old framing and finished it off to conceal the pipes. A home office for DeStefano was added along with a walk-in mudroom, closets and a small room with a large sink for bathing the dog. Then, because the driveway was re-graded, the foundation’s stonework was reworked.

These were the big moves. The smaller details could be just as time-consuming, Kent says, but maintained the home’s integrity. “We reused doors and trim. Now, when you look at it, you think, ‘This has been here for years,’” he says. “We also reused the old hardware and reworked the pocket door on the first floor. Everyone on our team has special skills, and some of our carpenters have the patience to work on those details.”

The team kept the old flooring, stacking it up as built-ins and new walls were installed. “It’s heart pine flooring,” Kent says. “Our guys said, ‘We can’t get this stuff.’ So, we tripped over it for months before reusing, and it’s beautiful.”

Outside, the siding, roofing, moldings and copper finial balls were replaced. The cupola on the garage was restored. Porches front and back were rebuilt and restored. New columns were added, and custom rails duplicated.

For DeStefano, the kitchen is the heart of a home. Now when she stands at her kitchen sink, she looks past her front porch to Middle Street to see people walking by. “It’s a lovely connection to the community,” she says. 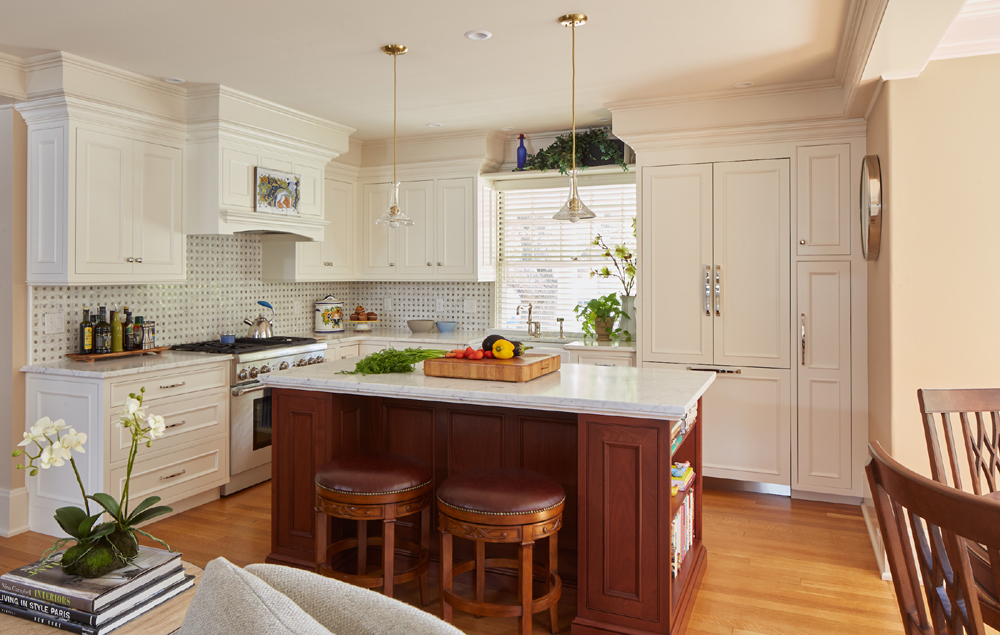 Marble tile for the kitchen’s back splash and island is used in just the right proportion for this central hub. Decanter-style pendant lamps by Lee Broom, an English designer, are functional and elegant.

With the creation of a more open floor plan, she also feels connected to the central part of the house with its fireplace and seating area as well as to the little breakfast nook with its restored faceted windows. The house is sunny and has a flow to it. Family and friends can move easily from one room to another and, in warm weather, meander out to the porch.

As for painting the woodwork, Markoff says, “We definitely had to do it to bring this beautiful old lady into the twenty-first century. It’s still just as graceful and elegant, but it’s bright, cheerful and livable.”

Throughout the downstairs, Markoff referenced the main brick fireplace with subtle touches, such as a bit of cinnamon color in the chair fabric. “It gives cohesiveness to the home,” she says. “By dialing it back, these colors actually speak more clearly.”

Markoff’s skills as a colorist accommodated the whole family. “DeStefano’s husband loves blue, so we incorporated blue touches for him. In his den, we painted the walls with Benjamin Moore’s Copper Mountain,” Markoff says. “It’s mostly white woodwork but ‘reads’ like a gentleman’s library. We also installed a motorized shade that drops over the bay window to reduce glare on the television screen. Plus, the restored pocket doors accommodate everyone’s audio privacy.”

In keeping with the home’s vernacular, Markoff recommended marble tile throughout and polished nickel finishes for the faucetry. Chandeliers add sparkle and feminine elegance over the dining table, breakfast nook and stairwell. In the kitchen, crystal pendant lamps provide task lighting.

Landscape architect Woodburn recalls the initial work on the home’s grounds: “We pruned and pruned in order to reveal the architectural proportions of the house, especially those of that wonderful front porch.”

Woodburn’s team was able to preserve many of the existing plants, which included hydrangeas, hollies, a mugo pine and a tall privacy hedge of arborvitae. They also added hostas and ferns. In the back of the house, Woodburn’s team preserved the large private oval yard, enhancing its structure with plantings that would bloom throughout the season. These included two blue rose of Sharon shrubs, a Japanese maple and a Japanese stewartia.

Having lived in their new home for several months, DeStefano says Stella Maris has launched once more, ready for a new century. She and her husband plan to live there forever. 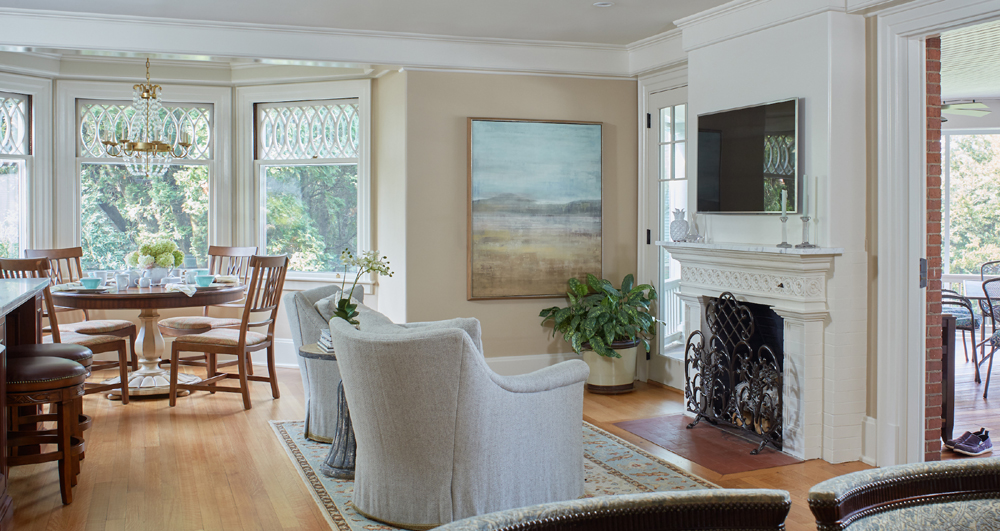 Restored faceted windows sparkle as sunlight fills the breakfast nook in the left of the photo. An oval-shaped chandelier complements the windows and defines the space. In the sitting area to the right, two pale-blue chairs create space for intimate conversation. Beautiful, original heart pine flooring underscores the home’s old-fashioned solid construction. 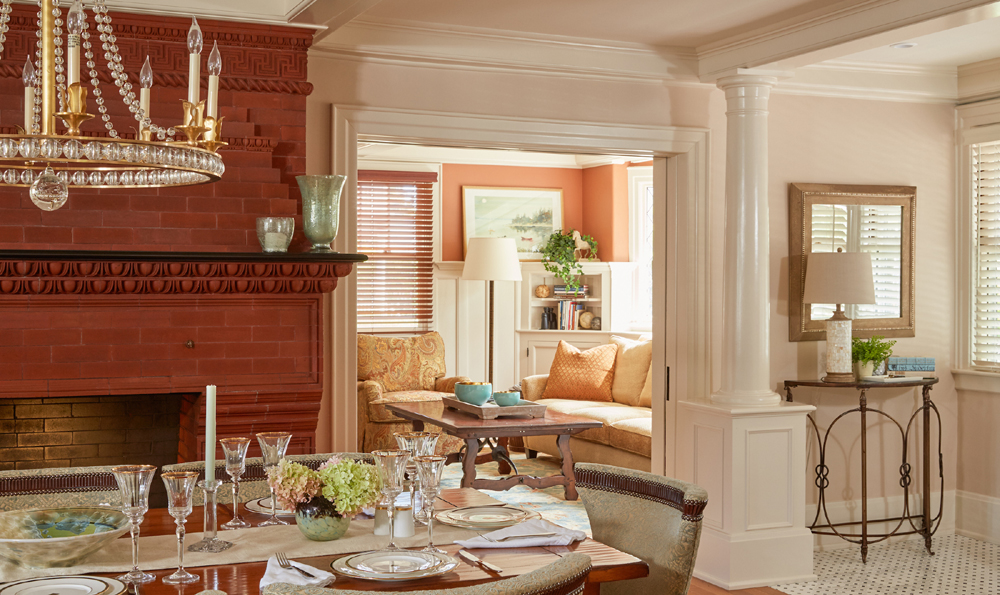 A regency chandelier highlights the restored brick fireplace and formal table in the dining room. Designer Cicely Markoff prefers a grayed tone for ceilings and created one for this room by combining 50 percent of the wall color with the ceiling color. Then the ceiling and wall colors reflect off one another and the room feels more enveloping. A discreet pocket door reveals a cozy den. 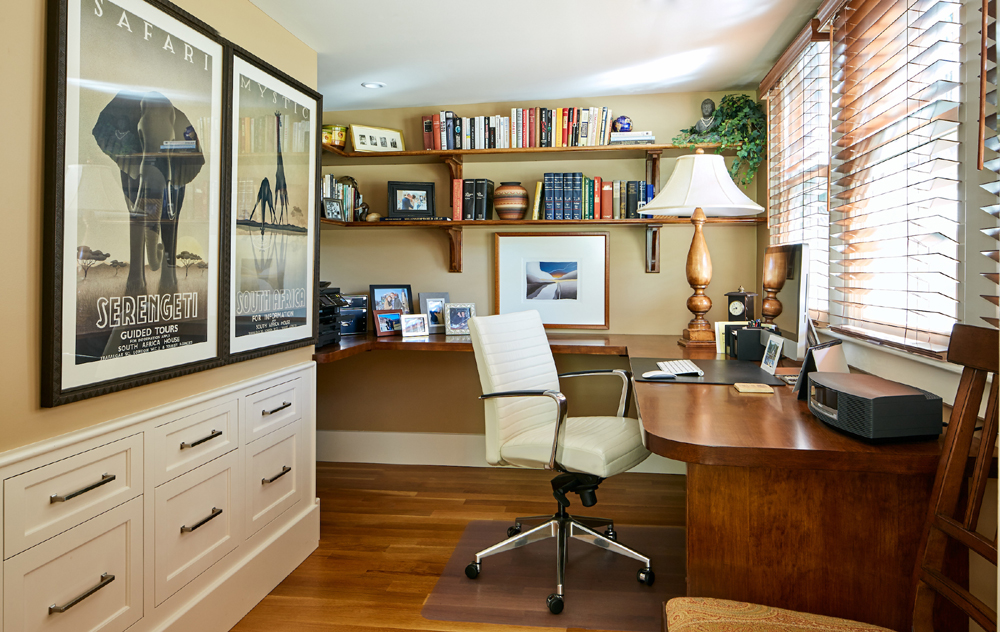 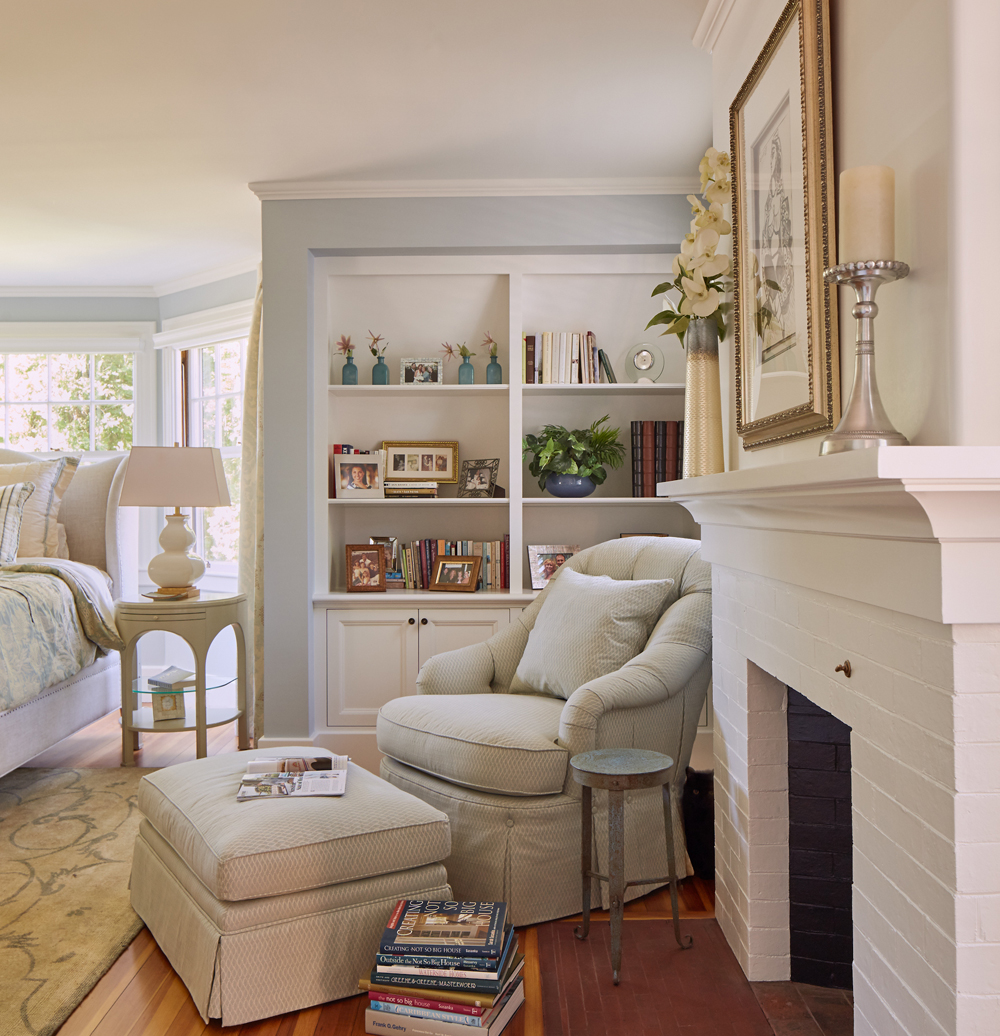 The master bedroom suite has its own fireplace. Painting the bricks white keeps the look light and updated. 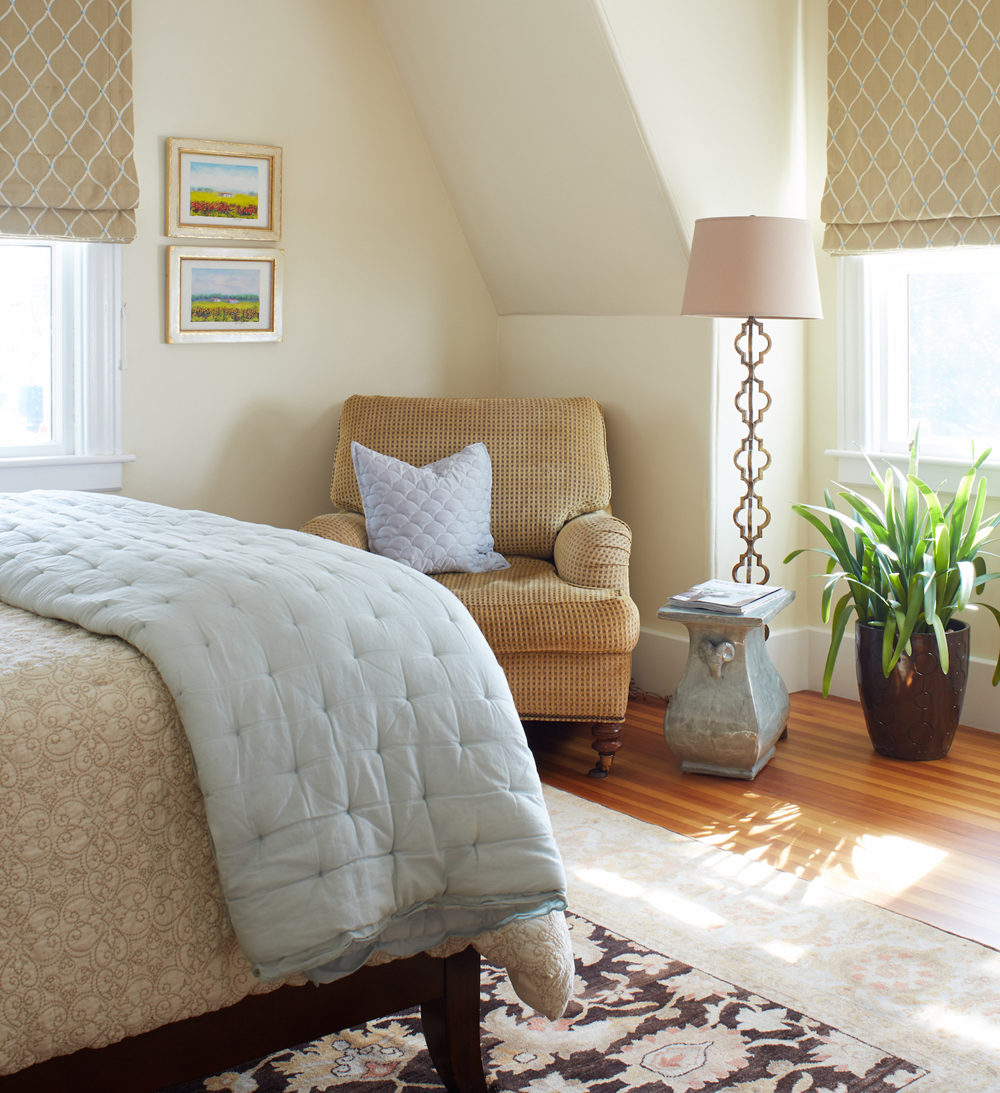 A guest room echoes the serene colors found in the master suite. 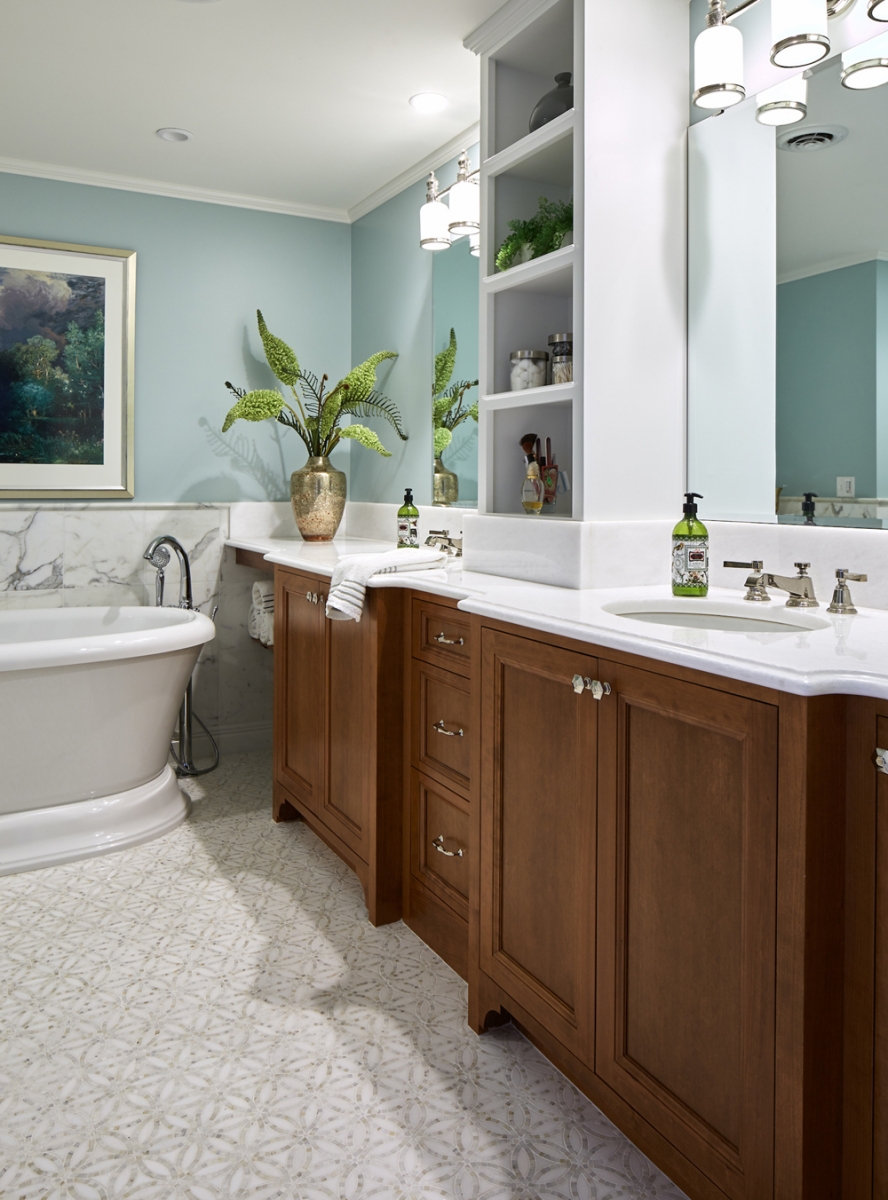 The master bathroom’s tile floor is warmed by an electronic heating system. 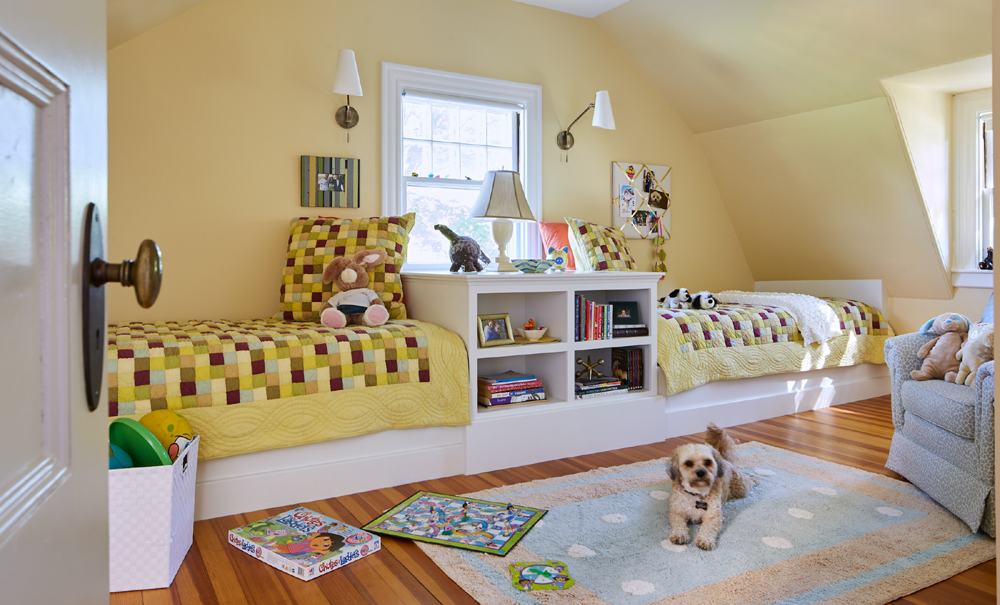 This cheery guest bedroom for kids also has the necessary outlets to charge their phones and computers. 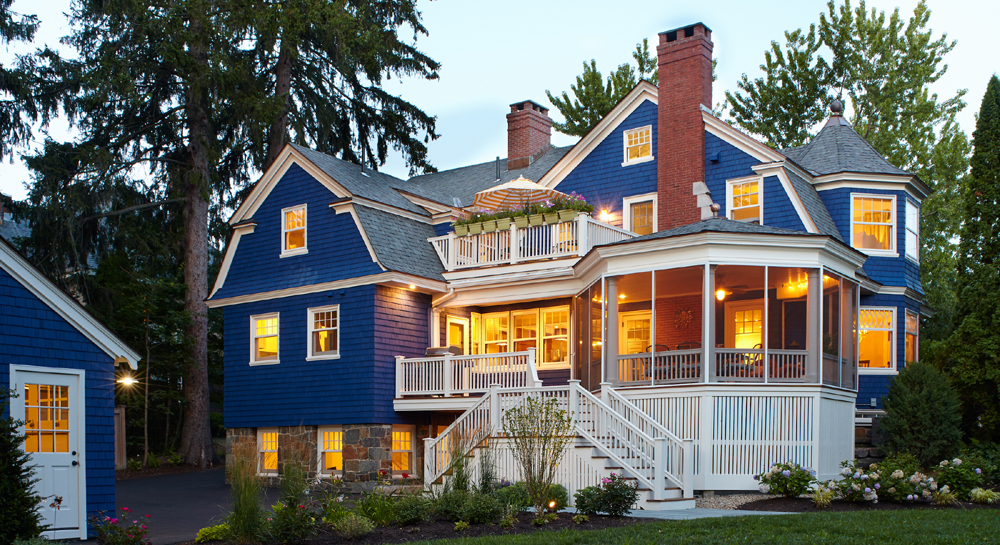 As seen from the garden, the house is in glorious full sail with its porches, decks and curved gambrel rooflines. 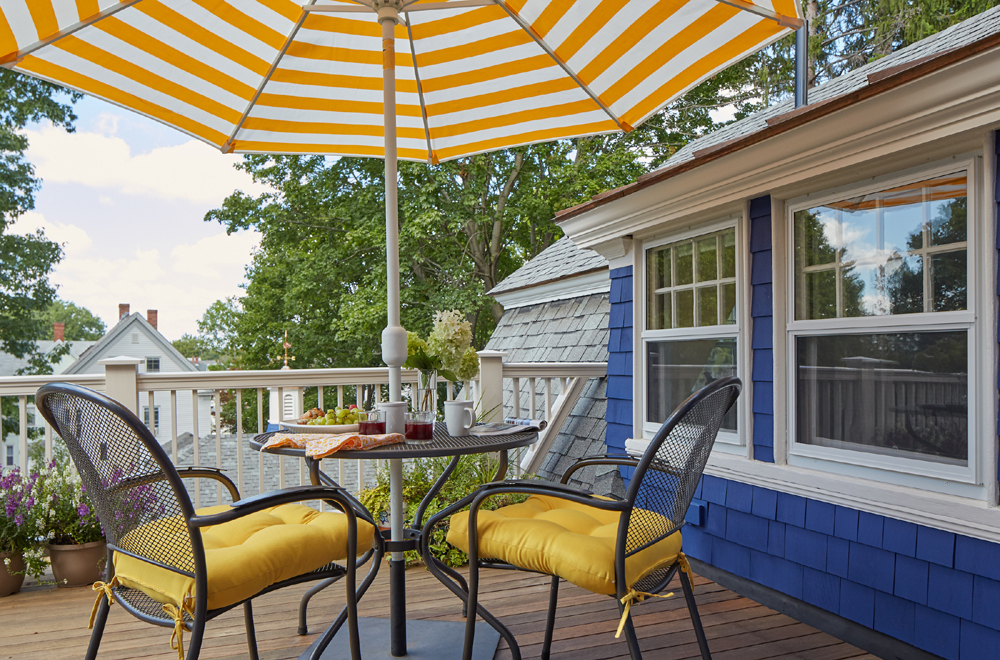 A small deck off the master bedroom affords a private and glorious view for two. 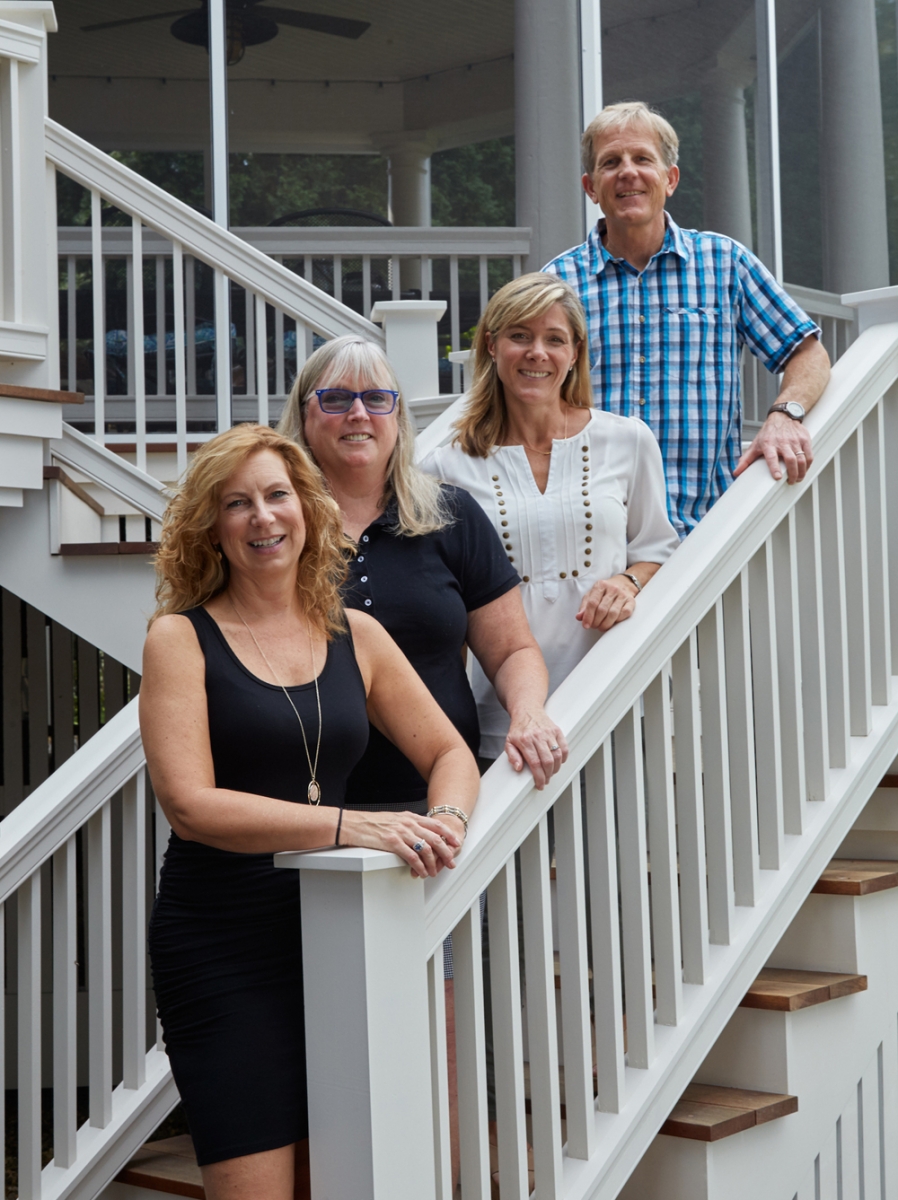