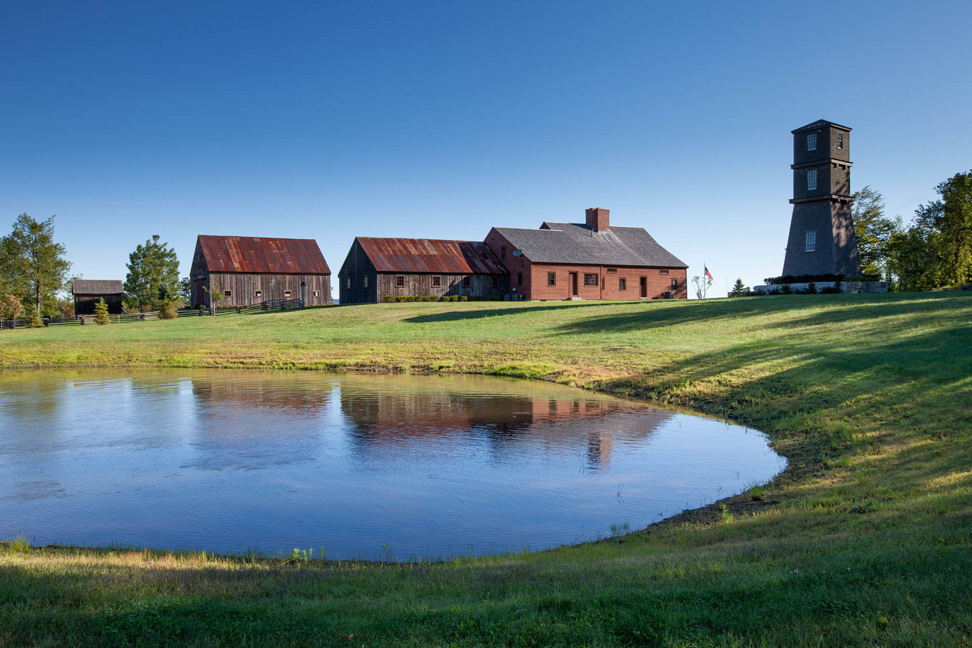 Although the Farley Garrison House looks and feels as if it's been part of the Frisky Hill land­scape in Gilmanton for centuries, the 1665 structure only arrived here in New Hamp­shire in 2000.

Believed to be among the oldest homes in the country and erected cen­turies ago in Billerica, Massachusetts, the home remained in the Farley-Jaquith family for twelve generations and has been described as the oldest home in the Bos­ton area occupied without interruption by descendants of its builder, according to the Doug Towle, the new owner.

However, in the year 2000, the build­ing was dismantled in Billerica and kept in storage until Towle purchased the home and rebuilt it on a beautiful piece of prop­erty with mountain and woodland views on Frisky Hill.

The relocation of the Farley Garrison House was a project that came together thanks to a different history: one of relationships.

Towle-who works professionally as a vice president of marketing and who earned degrees in business-is a self-taught expert in Early American architec­ture. At the turn of the century, Towle had already overseen restoration of a dozen authentic Early American homes, and he wasn't interested in another.

However, Henry Page of Henry Page House Restorations in Gilmanton, who had dismantled the home, told Towle about the project. Towle and Page had worked closely on prior projects, and Towle respects Page's more than fifty years of experience.

When Towle heard that Farley Garrison home was among the oldest homes in the country, he couldn't resist. "New Hamp­shire doesn't have many homes of that vintage," he says.

Starting with the grounds

Towle bought the Farley Garrison House with the intent of reassembling it on a suitable parcel and restoring it with all the modern amenities.

"Even though I was happy with the house I had, I looked for the right piece of land and it had to be in Gilmanton," Towle says. The property was chosen for its prox­imity to hundreds of acres of conservation land and the beautiful views.

To meet these goals, Towle convinced Gilmanton landowner George Twigg to sell a piece of land on Frisky Hill that in time would offer mountain views and an ideal setting for an historic homestead. Towle worked with Page on sitting the home and creating a new homestead that would come to include an antique water tower, a carriage shed, a corncrib, a barn and a schoolhouse.

A fairly flat piece of land, the parcel had been an apple orchard. To maximize the views from the home, the construc­tion team-which included Page and Jus­tin Caldon of Four Corners Construction in Gilmanton-modified the building site by building a small hill on which to perch the main house. Crews cleared the land, re­moved stumps, and built a stone wall and an access road.

"We did everything, soup to nuts," says Caldon, a Gilmanton native. "The house pre­dates the town by about one hundred years. We had to make the site look right, like it had always been part of the landscape."

Page says the house was originally built with custom craftsmanship and long-lasting materials that are simply not avail­able today. "I think, like any house of that period, the quality of the material was excellent: old-growth pine, chestnut and oak," he says. "The quality is so much better than those woods today mainly because they were from old-growth trees. The rings are closer together and less subject to rot."

None of the original interior walls had ever been painted. Caldon says he learned much from working with Early American construction. "The hand planning, the patina of the wood is nothing you can duplicate without age," he says. "I love getting hold of a 350-year-old piece of history and rebuild­ing it. This house will last for another three hundred, four hundred years."

The Farley Garrison House has several bedrooms, including a first-floor master; four bathrooms; updated heating and air conditioning systems; and a kitchen with all the modern amenities, including a Sub-Zero refrigerator and a Viking gas range. The look, however, is clearly early Ameri­can: the kitchen counters and sink are soapstone, and the cabinetry was made locally of hand-planed panels.

"As much as we could, we tried to keep the main house as true to period as pos­sible," Caldon says.

Towle collected and furnished the home with William and Mary or Jacobean-style furniture, but added comforts such as Oriental rugs that would not have been used or available to homes at the time.

"When you go through hundreds of gal­lons of paint remover during restoration, and straighten one hundred handmade nails every night, you're really hooked," Towle says about his hobby, which he's been involved in for forty-five years.