An interior designer uses her skills in a new way 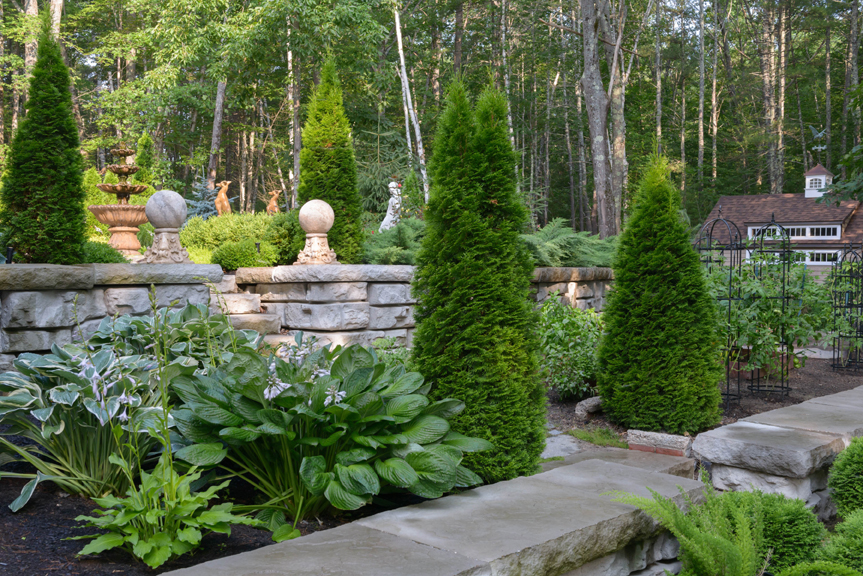 Designer Jeannie Poore of Durham used extensive terracing to turn a steep slope into
an attractive area for gardening and entertaining.

Richard and Jeannie Poore love the location of their Durham Point home near the mouth of the Oyster River with views of Great Bay. After tackling a year-long remodel of the house, they turned their attention to the landscaping—another big project. “There was nothing in the yard whatsoever,” Jeannie says. The house is located on a hillside that slopes steeply toward the river. “I think any topsoil we may have had in the back yard had washed into the bay long ago, leaving us with only ruts and weeds,” she says.

What did remain were portions of previous terrace walls, so the Poores had them rebuilt, extended and fortified to stop the erosion as well as create a large terrace for planting and living space. The project was entirely designed by Jeannie and done in stages over three years. Richard and Jeannie did much of the work themselves, along with Millstone Masonry in Barrington and mason Gary Gilbert of GWG Masonry in Belmont. Other than a few large evergreens, Richard and Jeannie did all the planting. “Richard is my best garden friend,” Jeannie says. “He has a very good eye, but he is happy to let me do the planning and design, and he does the heavy stuff. We are a great team and our gardens are a joint effort. He is a very supportive garden partner, and I couldn’t do it without him.” 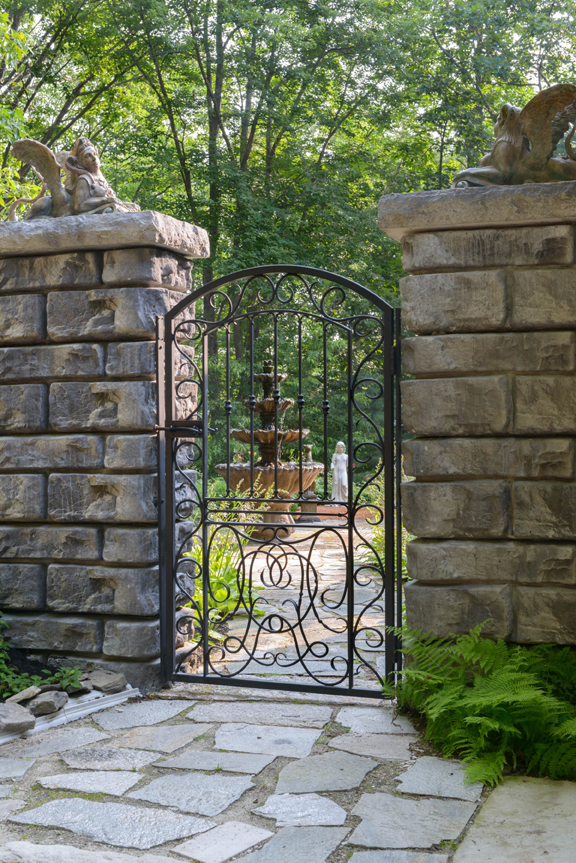 Griffins guard the entrance to the courtyard. The
wrought-iron gate was custom made in Arizona at
the Scottsdale Art Factory.

From interior to exterior

Jeannie is a published interior designer, so moving from interiors to exteriors was an easy transition. “Good design in any area always embodies the same principles of scale, balance, color, texture and shape, which are applied with flow, continuity and wit,” Jeannie says. “And a bit of drama completes the package!”

There are many large trees around the property, so Jeannie took two years to study how the light moved and changed daily and with the seasons. Being near the bay, the Poores also had to consider the wind, which can be damaging, especially in winter. “The biggest difference in landscape design is scale,” Jeannie says. “Outside the ceiling is the sky!”

Natural and cast stone are used in the walls and walkways. Jeannie planted a variety of evergreen junipers, arborvitae and boxwood as foundation plantings to create outdoor rooms and flower beds. She finds that the year-round green gives continuity of form to the landscape, even in winter. Then she began to fill the spaces with blooming plants and variegated foliage for color, texture and interest. “These are my ‘furniture and accessories,’” Jeannie says.

Rhododendrons, hostas and hydrangeas fill the shadier areas and she grows day lilies, peonies, irises, geraniums and daffodils in the sunnier spots. Blossoming trees—such as dogwood, crab-apple, lilac and cherry—add pops of color through spring and into summer. Agapanthus and elephant ear plants grow in pots after being overwintered indoors.

One of the first gardens Jeannie planted was a rose garden across the driveway from the house. “I love roses and always wanted a garden full of them,” she says. Unfortunately, the local deer also love roses and ate her bushes “right down to the nub,” as she describes it.

Later, the Poores created a semi-enclosed courtyard on the southwestern side of the house, employing a living wall of arborvitae. The courtyard is entered through a large, custom-made, wrought-iron gate supported by two stone pillars topped with bronze griffins. In that protected area, Jeannie planted about twenty-five new rose bushes, including her favorites ‘Gold Medal’, ‘Elizabeth’ and ‘Peace’. The garden is watched over by an antique marble statue the Poores have named “the Rose Maiden.”

“The plants get morning sun here, the area is well-drained and there is some protection from the deer,” Jeannie says. “It is a lot of work, but I love my rose garden.”

Another daunting task Jeannie undertakes each year is shearing her two large arborvitae topiaries. These twirly evergreens need haircuts spring and fall to keep them in shape. 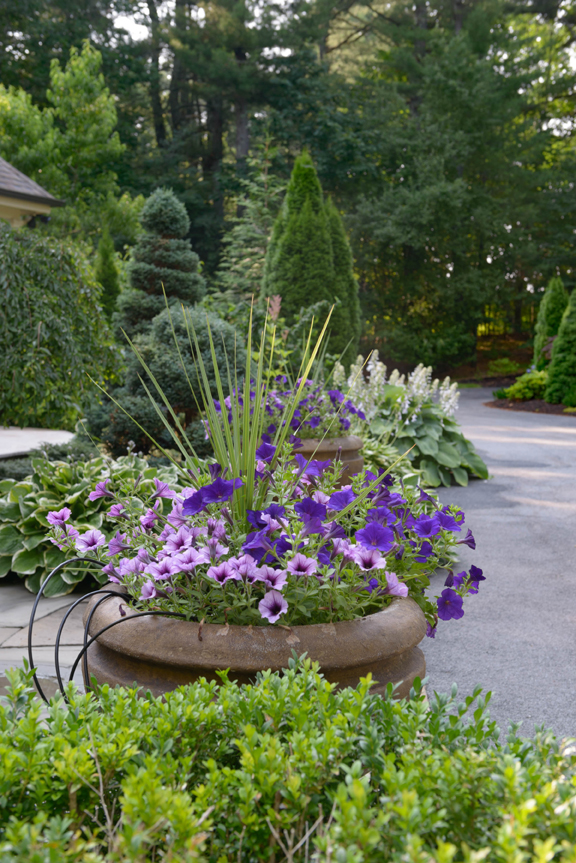 A few steps below the rose garden on a lower terrace is a kitchen garden. Jeannie located it near the side porch door for easy accessibility. “This makes it easy to keep an eye on things and close enough to the kitchen to run out and pick something for dinner,” she says. She grows herbs in its raised beds along with vegetables.

Jeannie’s love of gardening isn’t confined to her home—she’s a member of the Piscatequa Garden Club, based in the Seacoast, which offers opportunities for continuing education in horticulture and floral design. Because of her flair for arranging florals, her work
has been included in exhibits at the Museum of Fine Arts in Boston and the Ogunquit Museum of Art, as well as other venues.

Garden art figures prominently in the design. “I think garden ornament is essential to complete a garden,” Jeannie says. “It is the seasoning and the drama.”

Unable to find the type of statuary she wanted locally, Jeannie contacted Athens Stonecasting in Athens, Georgia, and brought a truckload north. Included were three fountains, numerous large urns, a pair of standing whippets and a pair of large obelisks. Jeannie fills the urns with different combinations of annuals and perennials each spring, and at the end of the growing season, she removes the perennials and adds them to her garden.

Other pieces of garden art are antiques that were bought at auctions. One favorite, a nineteenth-century terra-cotta sphinx, was badly damaged; Jeannie lovingly repaired and refinished it with an antique patina. She shelters it inside during the winter to prolong its life.

Now that the Poores’ yard is level, landscaped and lovely, they are able to enjoy the space as well as share it with friends and neighbors. “We entertain quite a bit,” Jeannie says. “it is like a big outdoor room and an extension of our home.”

How lucky they are to have Mary Ann and Guy Esposito as neighbors. Mary Ann is a New Hampshire Home contributor and host of Ciao Italia on PBS; Guy is an awesome gardener, growing a lot of the produce Mary Ann cooks with in summer. When New Hampshire Home visited the Poores, Mary Ann brought over a Lemon-Scented Geranium Cake to share and a scented geranium plant. 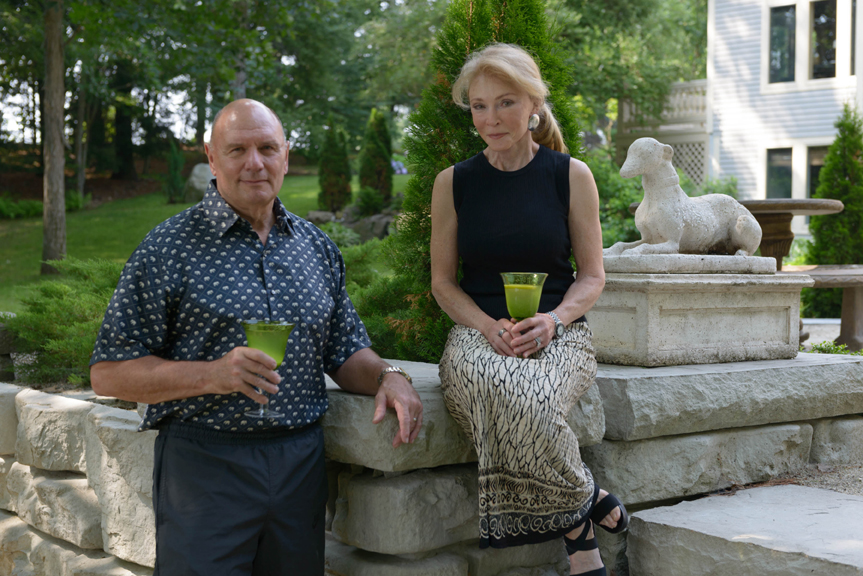 Homeowners Richard and Jeannie Poore enjoy working together in their garden. 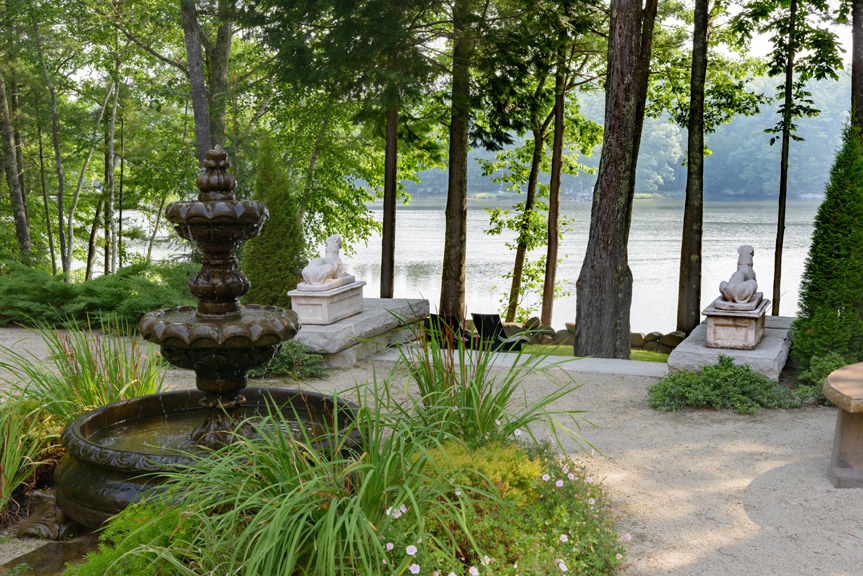 All the windows at the rear of the house look out over the terrace to the river.
Categories: Gardening & Landscape