Renovating a Restaurant With History

Inventive style and great food are the hallmarks of Mombo, located in an historic building at Strawbery Banke. 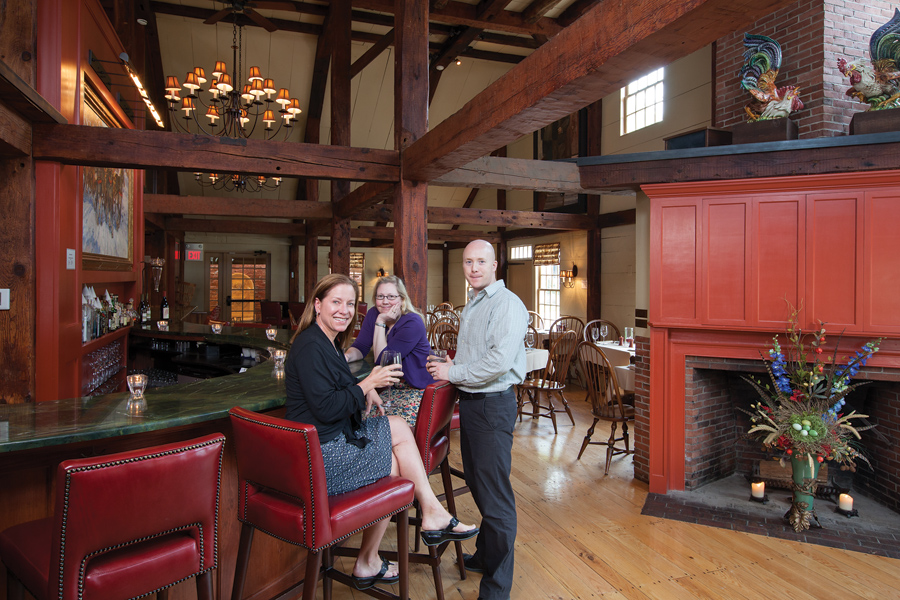 Sometimes you need to travel a bit to get to a good restaurant. For Dede and Brian Cadieux, the journey was nearly eight thousand miles. On vacation in Botswana, the York, Maine, couple stayed at Mombo, an exclusive safari camp deep in the jungle. “In five minutes, the entire staff knew our names and what kind of wine we wanted for dinner,” Dede recalls.

So impressed by the level of service, warmth and intimacy there, the Cadieuxes decided to start a restaurant in the Portsmouth area that emulated the Mombo magic. And, of course, they’d name it Mombo.

“Never on the Seacoast had we felt that kind of hospitality. We saw the need for a restaurant that could provide consistently excellent food with an inviting, relaxed atmosphere,” Dede says. While looking for a good location, they found the building owned by Strawbery Banke that had formerly been the Dunaway Restaurant.

Although it looks authentically Colonial, the building was constructed to portray a typical New England country store for the New England pavilion at the 1964 World’s Fair in New York, according to Stephanie Seacord, director of marketing communications at Strawbery Banke. Wood for the building came from beams in an old barn in Dover. The building was moved to Strawbery Banke in 1967, she said. One stipulation in remodeling was to avoid any changes to the exterior so its appearance remained consistent with the rest of the complex.

To rebuild the interior to reflect what the Cadieuxes experienced in Botswana, they hired Shannon Alther of Portsmouth’s TMS Architects and interior designer Michael Cebula of Cebula Design in Newburyport, Massachusetts. Both had extensive experience working with historic New England buildings. Renovation began in early 2010, and Mombo opened that May.

“The Dunaway was a little more country style with the wood beams, the wood floors, and the existing windows and door layouts. Some of these things we couldn’t touch because of historical reasons,” Alther says. “We kept it pretty much to the shape and space it was, creating a space in back for seating, an open kitchen and a bar there where you can watch the chef. We tried to work with what was there.”

Alther, Cebula and Brian chose the woods, metals and other materials used for the restaurant’s interior. “We just wanted to make it feel a bit ‘now,’ but combining that with warmth and nature,” Cebula explains.

Maintaining the wood structural elements and keeping the historic essence of the building was challenging, Alther says, as was moving the kitchen and keeping it open. Only one small wall was torn down. “It was a great collaboration. It was fun working with the finer detailing, and spending time on the design of the wood, the bar and how it all fit together,” Alther says.

Thanks to Alther’s and Cebula’s design and renovation, the restaurant’s interior exudes warmth and character through its beautiful wood beams and floors, polished metal, cloth and soft lighting. Numerous Russian paintings from the Cadieuxes’ private collection further help to burnish the mood.

But before getting further afield, you need to know that Mombo is rare and exceptional among the region’s other fine restaurants. A meal there may become one of the highlights of your life. The food is delicious and imaginatively prepared. Ingredients—whether lettuce, smoked duck breast, Angus sirloin, scallops or even simple breads—are extraordinarily fresh and satisfying. Fresh ingredients are so vital here that executive chef and general manager Thomas Perron won’t hesitate to change the menu according to what’s available and in season.

“We pride ourselves on our ever-changing menu and wine list,” he says, emphasizing that this is an integral part of Mombo’s concept. “We have adopted a ‘living menu,’ which means that in any week we may change the menu three or four times. We keep you coming back again and again simply because of this style.”

All the chefs have a hand in creating the menu, Dede says.

The wine list is a reasonable size with good breadth and depth. Perron focuses on wines that score 90 points or more in major wine publications. The list leans toward American wines, but is also well represented by excellent choices from Chile, France, New Zealand, Italy and South Africa. Some limited-production boutique winemakers are also listed. These have included Tiamo and Tortoise Creek, although they change frequently. Mombo’s by-the-glass selections are strong and wide ranging; definitely something for every taste and to match the food.

Sitting at the Chef’s Bar one evening, looking into the open kitchen, I was astonished by the precision, efficiency and skill of Perron, chef de cuisine Justin Bigelow and other kitchen staff as they moved around the kitchen. (Sous chef Alex Thomas was off that night.) Monica Amato, Mombo’s gifted pastry chef, worked directly behind the bar preparing desserts and salads. Amato makes desserts that are as innovative as the entrées, and include a sensational, deconstructed rendition of tiramisu made of Frangelico-soaked sponge cake, mascarpone ice cream, coffee mouse and chocolate crumble.

Even with a quick glance, you instantly know this is a supremely experienced and knowledgeable crew. It was a busy night, but no one looked rushed or flustered. Perron, especially, was amazingly calm as he rapidly read off incoming orders.

Calm and relaxed may be the best way to describe Mombo’s ambiance. “We want guests to have the complete experience: appetizers, wine and drinks, entrées and desserts,” Perron says. “Guests are never rushed to finish
and leave.”

Designed to work together

Mombo’s service and support staff deserves special mention. They are among the best anywhere. No “What’ll you have?” hurried and distracted gum-chewers here. Everyone I spoke with—bussers, food runners or waitstaff—seemed sincere and interested in my experience or needs. Staff members also were clearly familiar with the menu, the ingredients and how dishes were prepared. I’ve been to many rarified and exclusive restaurants where the staff wasn’t nearly as good. This, too, is by design.

“That’s how I hire,” Perron says. “I’m not interested in what a prospective employee thinks they should be like, but instead I want them to be involved and genuine with the guests.”

Unlike most restaurants, Mombo doesn’t have a manager on the floor watching over the dining room to keep things running smoothly. “We empower the staff to take care of our guests from beginning to end. This, in turn, carries over to taking care of the property and wanting to learn more about food, wine and service,” Perron says. If problems arise, his staff is encouraged to resolve them.

Such “ownership” of the whole operation helps generate enthusiasm and interest among the staff. “Everybody matters and works as a team. To me, that’s the most exciting thing,” Dede says about the staff.

“When you come to a restaurant, you want a two-hour vacation,” she says. “We want to give people an escape, an opportunity to relax and have fun. You can feel the energy in a restaurant. It’s there or it’s not.”