A young family finds the right-sized home in a perfect location to achieve their green dreams. 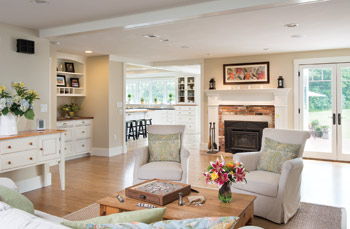 A centerpiece to the Campbell family’s plan for downsizing is a single living area with plenty of natural light. The woodstove insert in the original fireplace helps ensure the home is 100 percent fossil-fuel free.

When Camille and Stew Campbell moved into their four-thousand- square-foot Hollis Cape in 1997, it captured their hearts. But by the time they moved out in 2008, they were more than ready to leave it behind. There was one main reason for the breakup: The home’s energy inefficiency.

“It was a perfectly nice home,” Camille says. “But it was expensive to keep it warm, and we always found ourselves huddled up in the front room by the sunlight.”

So when the Campbells were approached out of the blue by a buyer, they jumped at the opportunity to design the energy-efficient home they were dreaming of.

“We thought if we downsized just a little, we could heat less space,” Camille says.

Then the Campbells found a 2½-acre lot with a wonderfully open south-facing field, and they knew they’d found their next home. The only problem was the inefficient, boxy Cape currently on the property. That’s when Camille and Stew turned to their long-time architect David Ely of Windy Hill Associates in New Boston. (They worked together on the Campbells’ old house and the Hollis Montessori School, where Camille is a founding member. Ely’s newest project there is a fourteen-thousand-square-foot building that is expected to be Passive House certified.)

“This house is about a thousand square feet smaller than our old house,” Stew says. “But the thing is, it doesn’t live smaller. We ‘upsized’ the spaces we use a lot and eliminated the spaces we didn’t, like the formal dining and living rooms. We now have a home where the space is used much more efficiently.”

The first step was capitalizing on what drew Camille and Stew to the property in the first place: that beautiful, open field. Ely reoriented and redesigned the back of the house to include a kitchen and dining space with a wall of windows that overlooks the field, allowing the home to take advantage of the warm, south sun.

“This area was the nicest space in the old Cape,” Ely says. “So we made the kitchen where people want to be.”

“In order to take an existing structure like the Campbells’ and make it meet all their needs for energy efficiency, there would need to be some major demolition to the existing house,” says Mitch Larochelle of SRT Construction & Equipment LLC in Bedford, who served as the project’s general contractor. “Then, the major layout changes supported the goal of being named an Energy Star renovation project.”

Through the use of efficient, triple-glazed windows from FiberTec Window and Door Manufacturing, the sun’s heat is captured and held. Throughout the house, the south-facing windows have a higher solar-heat gain. “The casement windows have a U-factor of .18, and the double-hung units are U.21,” Larochelle says. The U-factor of a window measures its rate of heat loss, with lower U-factors indicating more efficient windows. For example, high-performance double-pane windows can have U-factors of 0.30 or lower, while some triple-pane windows can achieve U-factors as low as 0.15. The low U-factor allows the windows to be consistently warmer to the touch.

Understanding how tight the windows are only takes a moment of silence. “It’s so quiet in the house,” Camille says. “We’re close to the road but we never hear a car go by.”

Supplemental heat is provided by a woodstove insert in the Cape’s original fireplace (still in the center of the home) and by a water-to-air geothermal system, which was installed by Ultra Geothermal, Inc. in Barrington. The result is a house that is 100 percent fossil-fuel free.

Going gas-free was a simple choice for Camille, but that meant she had to wade into new territory. “I’d always cooked on a gas stove,” she says, “and I wasn’t sure what I’d think of not. But as it turns out, I love my induction cooktop! It’s the most efficient.”

Other energy-efficient improvements include LED lights throughout and an insulated roof. Ely says that typically only a home’s ceilings are insulated, which is why the attic is usually a source of heat loss.

“The floors, walls and roof separate indoor and outdoor temperature differences, and resist air and water infiltration,” Ely says. “By moving the upper part of the thermal envelope from the ceiling to the roof, we have much better control, especially in a Cape-style home with dormers.”

To reduce air infiltration by sealing the cracks in walls, around windows and doors, and in the roof, Larochelle used between two and eight inches of high-density foam throughout the house. This also helped to increase the R-value, which measures the thermal resistance of a material to heat transfer. The higher the R-value, the greater the insulation’s effectiveness.

But a building does need to breathe. The April Aire humidifier pulls humidity through the ducting system on dry, winter days. And the Imperial heat-recovery-ventilation unit draws in fresh air to ensure air exchange. “Both of these additions to the geothermal heating and cooling system make for a very comfortable environment,” Larochelle says.

The improvements that Ely and the Campbells made were all done on the Cape’s existing footprint. “When you downsize,” Ely says, “use every nook.” Which is what they did with built-in shelving; storage tucked under dormers and eaves; and two-foot-by-two-foot square windows that are set low in the wall to let light into an otherwise dark hallway and provide an architectural feature over the
side entry.

The second floor received its own overhaul. Like most traditional Capes, the original house had a half-story second floor with the sloping roof gable. Now, Camille and Stew have a master suite, a modest bedroom for each of their girls and, thanks to a new dormer, ample space above the garage (currently being used asStew’s gym).

The master bedroom is north-facing, allowing the adjoining master bathroom to benefit from the warmer south side. “It worked out well, “ Ely says, “because the Campbells said they liked their bedroom on the cooler side, and Camille doesn’t have to have cold tile in her bathroom. Plus, they get the beautiful east morning light that’s nice to wake up to.”

Waking up to lovely natural light and a highly energy-efficient home—now that feels like a combination that equates to years of happiness.