A one-of-a-kind furniture collection and a plan for long-term living inspired the redesign of a Nashua duplex. 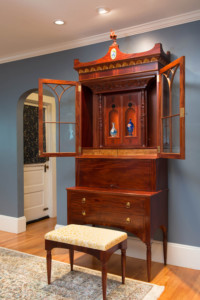 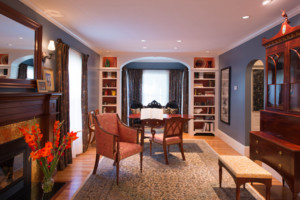 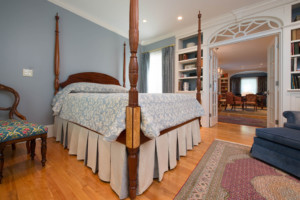 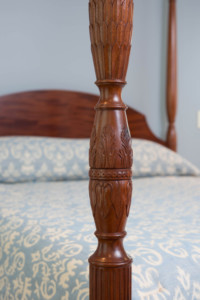 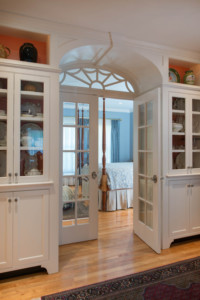 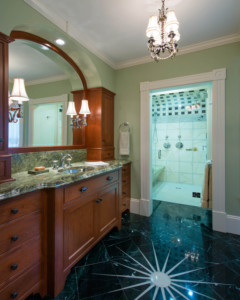 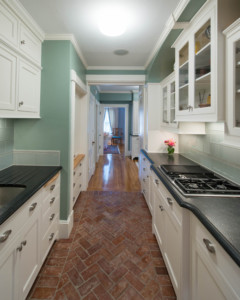 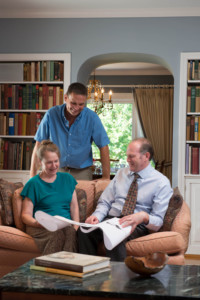 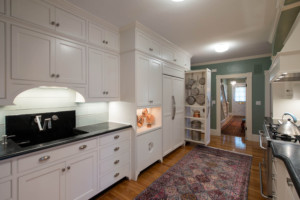 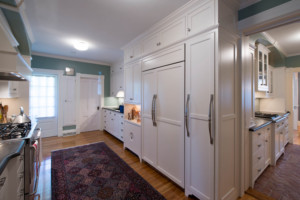 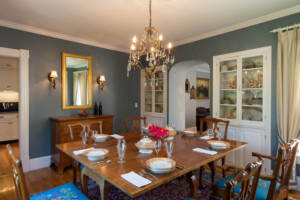 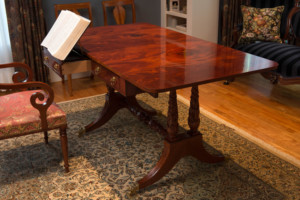 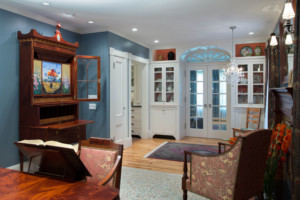 On a pleasant but unremarkable street in Nashua is a turn-of-the-century two-family house whose unassuming exterior belies the richly artful world within. Diane Griffith has an extensive collection by New Hampshire Furniture Master David Lamb, and even the simplest of these pieces has details that might first be overlooked: inlaid woods on the poster of a bed or carvings in the leg of a chair. The secretary in Griffith's library, by Lamb and painter James Aponovich, exemplifies this hidden treasure motif: the doors of "Lambovich I" open to reveal a painted triptych with gold leaf (see A New Path for Established Artists, September/October 2008).

The interior renovation that Griffith undertook a little more than two years ago was designed around many of her pieces of furniture. Her client relationship with Lamb began in 1984-an especially long time, notes Lamb, for any artist and client. "We've grown together as client and craftsman," he says. "Diane is excellent about waiting [for work to be done], and understands that good things and good designs take time."

But the home is no mere showcase. "I'm a functional person," Griffith says. She enjoys the furniture for its beauty, but she also uses it. Her collection includes another secretary by Lamb in the living room; and a reading table he made in the library, which offers a surface wide enough to spread out a newspaper as well as a book rack and a writing surface that folds up from a drawer under the table.

Designing for the long term

That same sense of practicality prompted Griffith to think about the future when planning her renovation. Her goals were not only to create an attractive setting for her furniture and to add a master suite, but also to design her space for conversion to one-floor living if and when she ever needed to. Renovating for the long, long term was the goal.

Griffith, an Iowa native, bought the house in 1982 after moving to Nashua from upstate New York. At the time she purchased the duplex, it was set up for three families (with one half subdivided into two separate rental units, one up and one down). Over the years, she has occupied and rented out different sections of the house-and planned her renovations, while steadily commissioning Lamb pieces. But a precipitous event three years ago-an accidental back flip down her cellar stairs-moved Griffith from the planning to the execution stage. A redesign to accommodate one-floor living would give her the flexibility to stay in her own home as long as possible.

In the beginning, Griffith had ideas and drawings, but no architect. She wasn't even sure she needed one until a contractor recommended Lafe Covill, an associate AIA member, formerly of PMR Architects PC of Nashua and now with TMS Architects in Portsmouth. That turned out to be a serendipitous recommendation, because Griffith found that while Covill's tastes were very different from her own, he was able, by talking ideas through, to create designs that addressed her needs and desires. "She had very specific ideas because she had been thinking about this for years," Covill says.

The working plan involved converting the three-family house to a two-family by retaining part of the upstairs as a separate rental property, and reclaiming part of the downstairs as a master suite. Covill opened up the dividing line between the two ground floor units-what he calls "the central spine"-to allow access to all the spaces. Griffith's original living space, which is to the left when entering the house, remains somewhat as it was, with the hall and living room in front as well as a dining room, bathroom and laundry in back. The renovation connected the right-hand unit to her home, and this space was converted to a self-sufficient master suite that includes a private library and kitchenette that annexes her original kitchen.

Perhaps the most thoughtful and intriguing part of the renovation is the kitchen, which consists of two sections that connect the two formerly separate units, with a larger kitchen on the left side and a smaller annex on the right. Currently, the two-part kitchen is used as one space, but a discreetly placed pocket door slides out to divide the kitchens, the "public" and "private" sides of the home. The ingenious part of this design is that Griffith can enjoy her first-floor living as well as close off the master suite and gain complete privacy from the "public" side of the house if need be.

In lieu of a general contractor, Griffith worked with plumber/electrician Dave Lavoie of Fern & Sons in Nashua. They have been working together for thirty years. "He pretty much came with the house," Griffith says. "He is the only person who knows my house better than I do-to say nothing of how aware he is of how I like work done. The time saved with Dave being able to do the plumbing, heating and electrical was invaluable. He truly functioned as the general contractor."

The living and dining rooms received nominal changes to accommodate flow for the new layout. Before this renovation, Griffith had the living room painted a soft blue and installed a working fireplace with a chimney made of hand-struck bricks that were reclaimed from Martha's Sweet Shoppe in downtown Nashua. This same brick was used as the transitional flooring in the kitchen annex between the original oak floors on the "public side" and the new red birch floors of the private master suite. Comfortable upholstered pieces, oak flooring and decorative elements, such as needlework that Griffith made herself, help give a sense of warmth to the room. One of the signature pieces here is the secretary that was Lamb's first commission from Griffith. Another is a piecrust table whose top is made from a single piece of cherry, part of a tree Lamb brought from Pennsylvania to his workshop in Canterbury for Griffith's solid cherry dining table.

The kitchen renovation resolved an issue in which, as Griffith puts it, "I had a huge kitchen with no space." Her new design has plentiful storage, but most of it is hidden. There are five pull-out cabinets: two for pots and pans, and three for spices. "Everything stows away," Griffith says. There is a pull-up work table, a retractable mixer and an appliance "garage" that features a butcher-block chopping surface designed just for Griffith's height. The kitchen has a reclaimed soapstone sink and backsplashes of large glass tiles that are uninterrupted by outlets or switches. Instead, these are placed on a strip on the underside of the cabinets, in keeping with the clean look and ease of maintenance. A special lighting element over the stove features morning glories, a flower that is carved in several of Lamb's pieces and appears in the oval painting by Aponovich on the secretary in the library.

A pre-existing plaster archway between the living room and dining room was the inspiration for a recurring element throughout the house-in the library at both ends of the room, over the stoves in both the main kitchen and annex, over the kitchen sink, and over the mirror in the master bathroom. "I used it to provide design continuity and a focus for each space," Covill says.

In the library, Covill added a built-in arch over the south-facing bay window to create an alcove for a heavily carved Victorian settee. At the opposite end of the room, a paneled arch over a French glass door with an elliptical transom and beveled glass panes connects to the master bedroom. This doorway is also flanked by bookshelves that have backgrounds painted a salmon color to highlight Griffith's salmon and gold Scalamandre chair fabric. The shelf assembly was built by WS Dennison Cabinets in Pembroke, which also provided all the new cabinetry, including matching Victorian millwork as well as a number of paneled and glass doors.

Covill drew a great deal of inspiration from the Lambovich secretary, which is a dominant object in the room. One of his ideas was to use metallic gold tile as a surround for a gas fireplace opposite the secretary. The tile reflects the gold leaf in the Aponovich paintings, as does a mirror over the fireplace.

Covill's portfolio describes the design philosophy for the project this way: "As you progress into the private spaces, these reinterpreted motifs [the arches, colors, materials, moldings and patterns] evolve into increasingly more refined details, becoming more inventive and luxurious."

This statement is borne out, for example, by the more intricate interpretation of the paneled arch leading to the master suite and the increasingly rich materials within. The bedroom features an impressive four-poster bed by Lamb. The bedspread is a weave of blue and white extra-wide damask from Busatti in Tuscany.

The suite also includes a walk-in closet, and a bathroom with a small Picasso tile on the wall and sizable steam shower tiled in onyx and verde mare marble. Covill and Griffith designed the basket-weave tile ceiling together, and Artistic Tile of Nashua provided the tile and installed it, a job requiring much attention to detail. As luxurious as the bathroom is, it is also designed to provide functionality for years of use. For example, the walk-in shower is large and features a seat as well as a non-slip floor of textured glass tile pebbles, and lighting from 270 watts of LEDs that provide the feeling of bright sunlight.

In looking back on the project, "It was a challenge to design around the furniture Diane already had," Covill says. But that was clearly essential to creating a place that Griffith could enjoy for many years. Covill's willingness to accommodate Griffith's needs is something Lamb appreciates: "What a great feeling," he says. "No matter where you look, you see your work. To have the furniture come first, that's almost unheard of."

"I'm as happy as a clam," Griffith adds. "Home is very important to me."