Nearly half of those we surveyed are putting so-called smart tech in their homes. Just over half are not. Where do you stand? 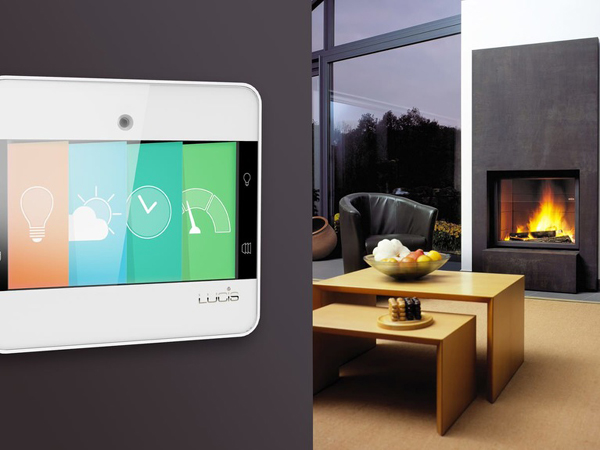 Do you like to check on your home via your cell phone while you’re away? How about monitoring your little one’s nap time from the computer downstairs? If so, you’re part of a growing number of people using smart technology at home.

About 45 percent of renovating homeowners have added or are adding systems and other products that can be controlled with a mobile device or computer, according to the Houzz 2016 U.S. Smart Home Trends Study. Slightly over half are not joining the smart home trend — some citing privacy concerns for their choice.

The study, from the Houzz research team led by principal economist Nino Sitchinava, polled nearly 1,000 Houzz users in the U.S. who own homes and had either completed a home renovation project in the last year or were planning one within the next. Read on, then tell us in the Comments what you think. Does smart home technology appeal to you? 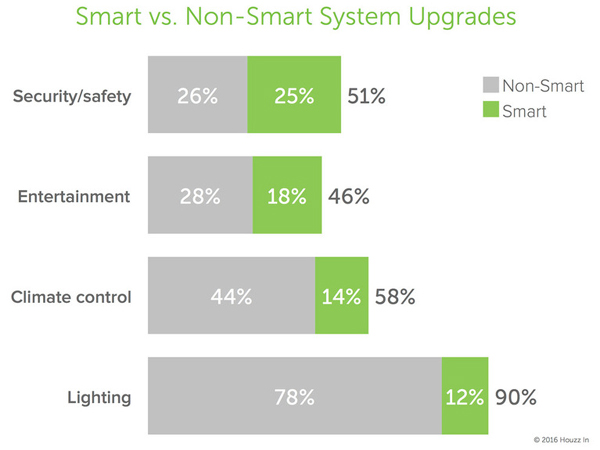 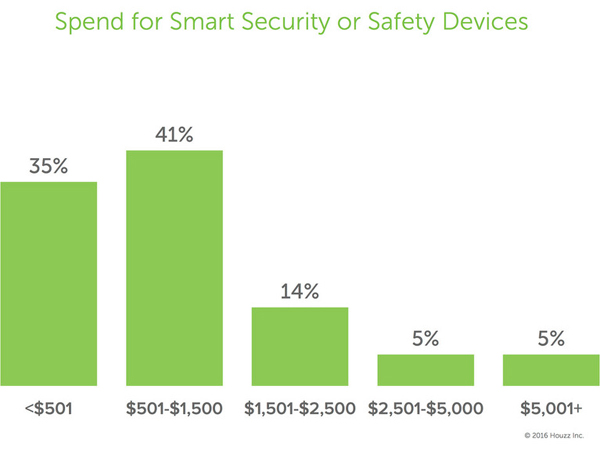 But let’s not break the bank. Homeowners who choose smart security technology spend more, not surprisingly, than those who choose more conventional alternatives. About one-third of renovating homeowners spend $500 or less on smart security, while another 41 percent spend between $501 and $1,500. 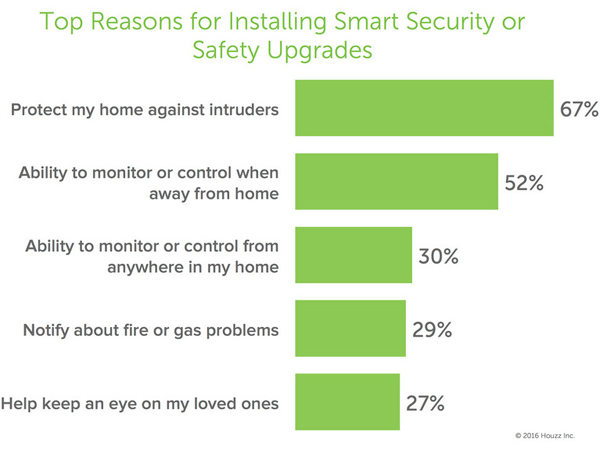 No intruders here! The No. 1 reason renovating homeowners choose to upgrade to smart security is to protect their home against intruders. After that, renovators cited the ability to control and monitor their homes, both while inside them and while away. 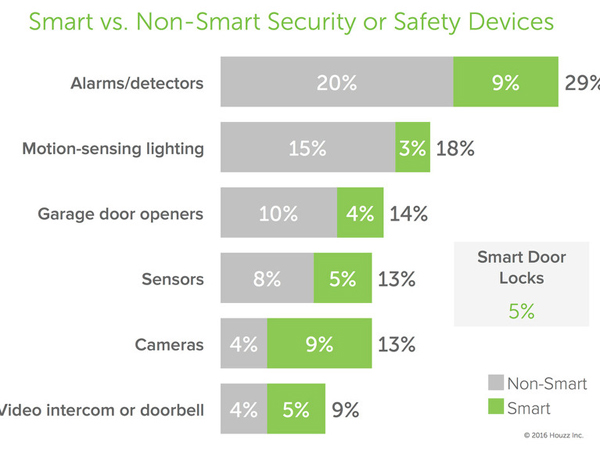 This home is protected by smarts. The most popular safety-related upgrades that use smart technology are alarms and/or fire and carbon monoxide detectors, and cameras; those two types are installed by about 9 percent of renovating homeowners each. About 5 percent of owners opt for smart door locks, which can be connected to Wi-Fi and controlled via a computer or mobile device. 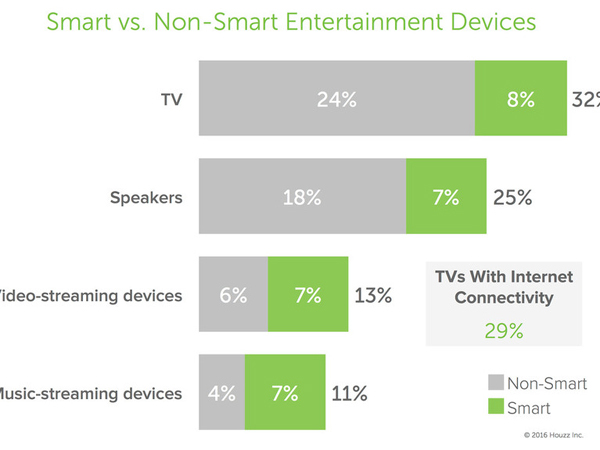 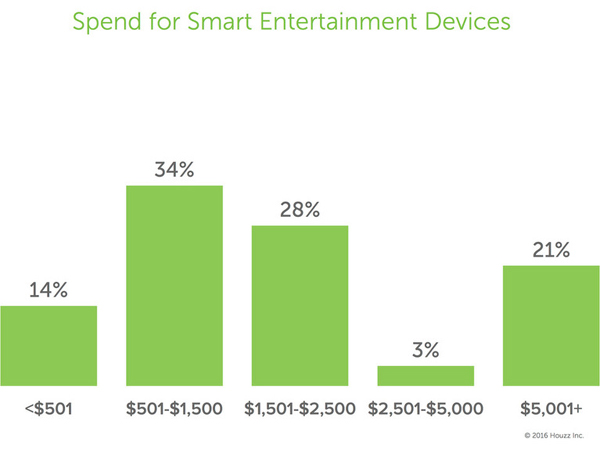 It’s hard to say no to a smart TV. Homeowners who buy entertainment systems shell out in a wide range of cost categories. About 21 percent of renovators who opted for smart entertainment spent more than $5,000, while only 5 percent budgeted for this spending. 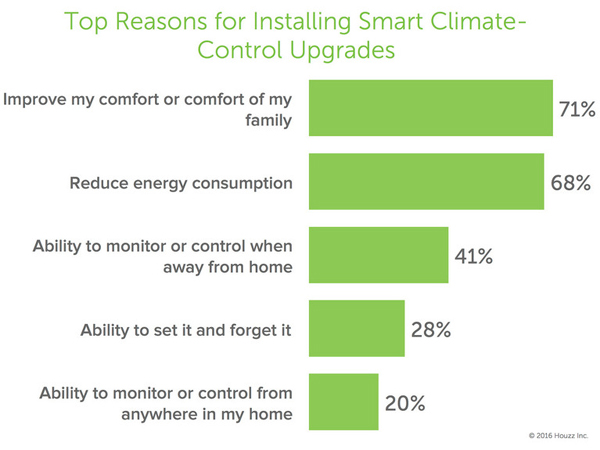 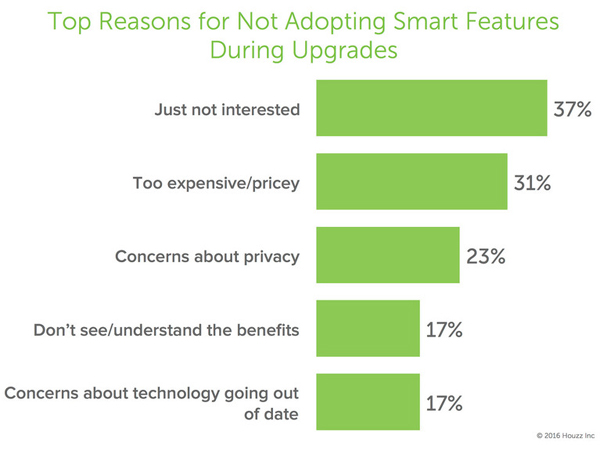 Nontechie, and it’s OK. Although a growing number of renovators are using smart tech at home, more than half of renovating homeowners choose not to use smart security products, lighting or systems and devices for climate control or entertainment. Among that group, only about one-third considered them as an option. Among those who considered, about 37 percent just weren’t interested. Notably, nearly one-fourth of the entire group of nonadopters shied away because of privacy concerns.