A brick building in Keene is transformed into an energy-efficient coffee roastery. 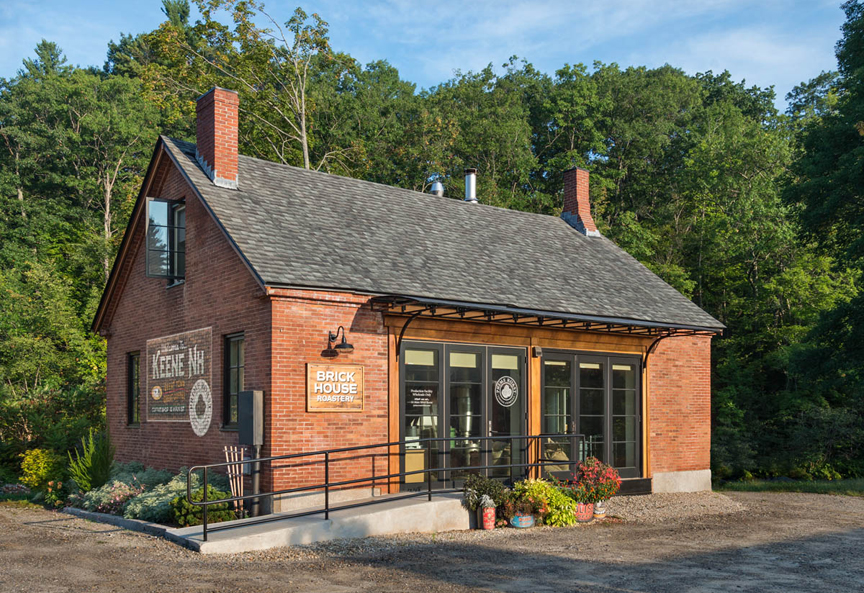 Built in the 1840s as a mill manager’s house, this building sat abandoned until 2014, when Judy Rogers bought it and turned it into a roastery for her business, Prime Roast Coffee Company. Her goal of making the roastery green and sustainable started with the adaptive reuse of the building itself.

Judy Rogers had driven by the old brick building many times in the years she’s lived in Keene. It sat on a small bit of land right on Route 101, bordered by a busy intersection. Built in the 1840s as a mill manager’s house, the building had become a vacant remnant of the city’s industrial past.

The years had taken a toll on the building. Most evident was an outside wall that was crumbling. Rogers describes it as “a wreck, a tear-down,” but there was something about the building that intrigued her enough to buy it.

“There are buildings that people are drawn to, places that you put yourself in when thinking about your life’s dream,” Rogers says. ”This is one of them.”

Her dream? To use the building for roasting coffee. Her business—Prime Roast Coffee Company, which begun in 1993—had outgrown its retail space on Keene’s Main Street. More storage was needed. Plus, Rogers wanted to separate the roasting from her trendy café to provide a more peaceful environment. “Our production is up to five thousand pounds of coffee a month,” she says. “Coffee roasting equipment is loud, and we roast every day.” Another aspect of her dream: being green and sustainable. She had all kinds of plans to make that happen in her new building, but the repurposing of the structure itself was a large first step. “I wanted this project to be an example of how adaptive reuse can benefit the business and the community, that the extra money spent in preservation will be recouped in many ways,” she says.

Pursuing her dream would be a daunting challenge. Architect Michael Petrovick, of Catlin + Petrovick PC in Keene, assessed the building’s condition and found it “dire, in virtual ruin.” Significant settling of the stone foundation under the east wall meant what was left of the wall had to be removed and the structure stabilized before the project could begin. “At one point, there was very little supporting the exterior masonry walls and roof,” Petrovick says.

The crumbled masonry wall was replaced with glass. This has a threefold benefit: It provides the interior with a lot of natural light, permits the viewing of the coffee roasting process from the outside and bi-folds to become the loading dock entrance.

To accommodate the size and weight of the new coffee roaster, the stone cellar was eliminated and an insulated concrete slab installed. “The finished floor height was lowered to provide ample clearance for the roasting equipment,” Petrovick says. 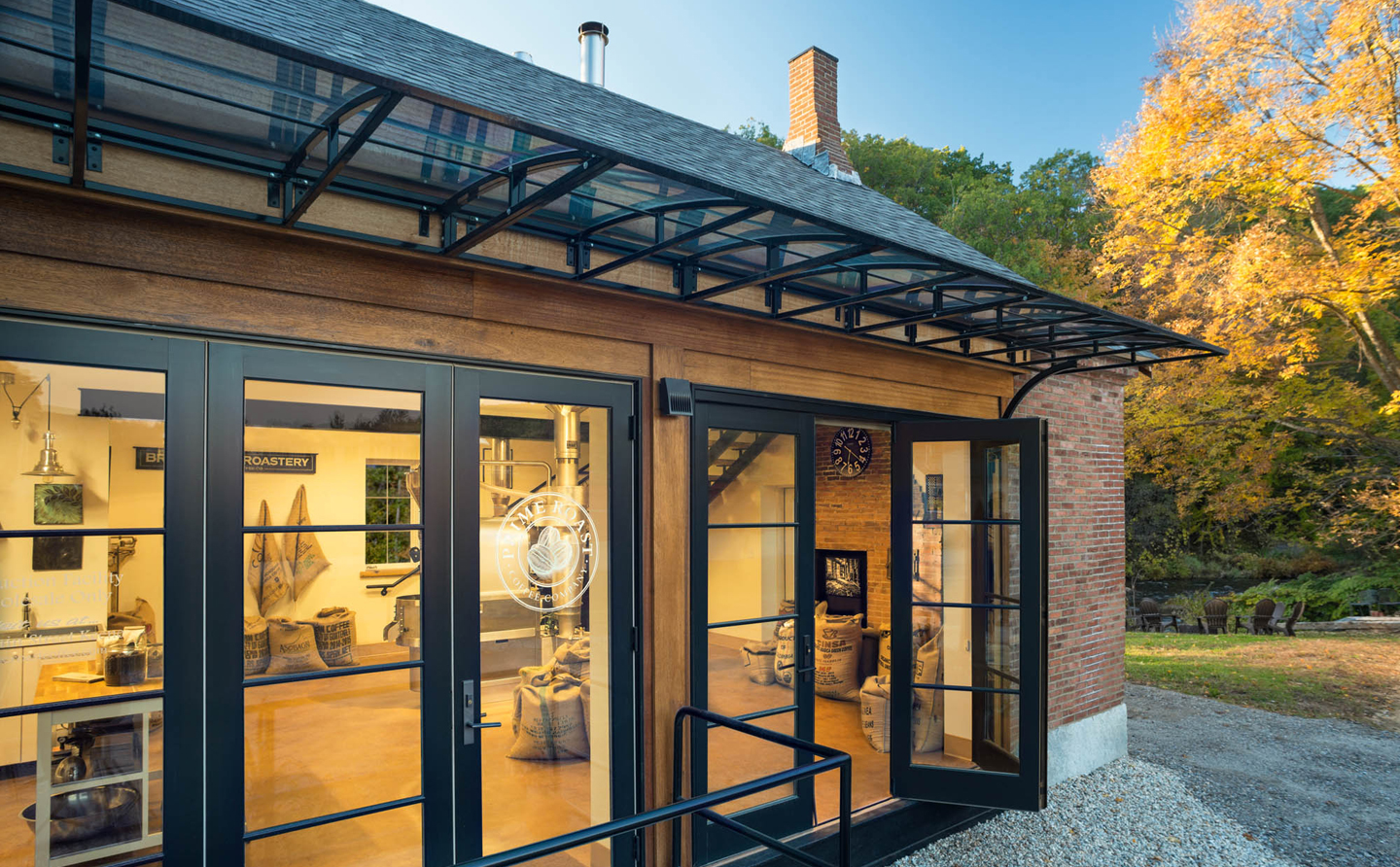 A crumbling masonry wall was replaced by a wall of glass with black-clad, energy-efficient windows and doors.

The concrete floor that holds the roaster, bags of green coffee and the wholesale order fulfillment area is painted in a warm tone (“like coffee splatter,” Rogers says) and the newly sheetrocked walls are painted white (“to keep the space bright and welcoming,” Rogers says).

Acting as her own interior designer, Rogers left the original brick fireplaces and chimneys exposed to maintain the building’s historic ambience. Also exposed is the new steel support beam in the high ceiling.

The industrial-inspired staircase to the second floor—which houses an office and secondary storage space— is also steel, with treads made from wood reclaimed from the building’s joists; the railings are metal pipe. It is Rogers’s design, and the work of two local artisans: welder Troy Tucker of Tucker’s Metal Fabrication & Welding in Munsonville and furniture maker/ wood artisan Gary Spykman of Spykman Design in Keene. 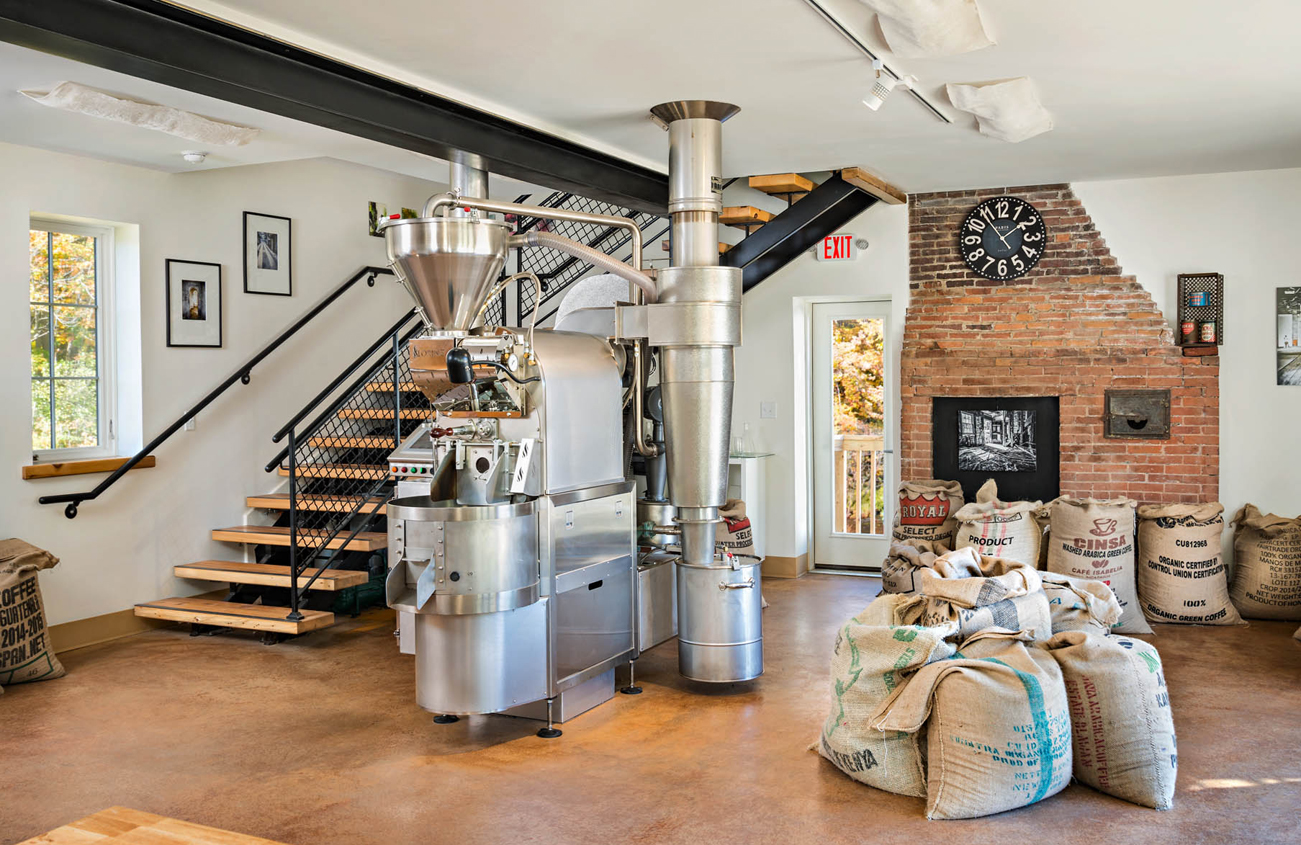 The industrial-inspired steel staircase has treads made from reclaimed wood.

Continuing the industrial look are the black-clad, energy-efficient Marvin casement windows and doors. On the exterior, above the glass wall, is a black steel canopy. To the left of it is the sign: Brick House Roastery.

But there is another sign that was an important design element to Rogers. It’s called a “ghost sign,” reminiscent of long-ago signs that were painted directly onto the building. “The goals were to have a sign that fit the building, advertised our business to the thirteen thousand cars that go past each day, and [because the roastery is not open to the public] discouraged people from entering the property at this very busy intersection without being negative,” Rogers says. 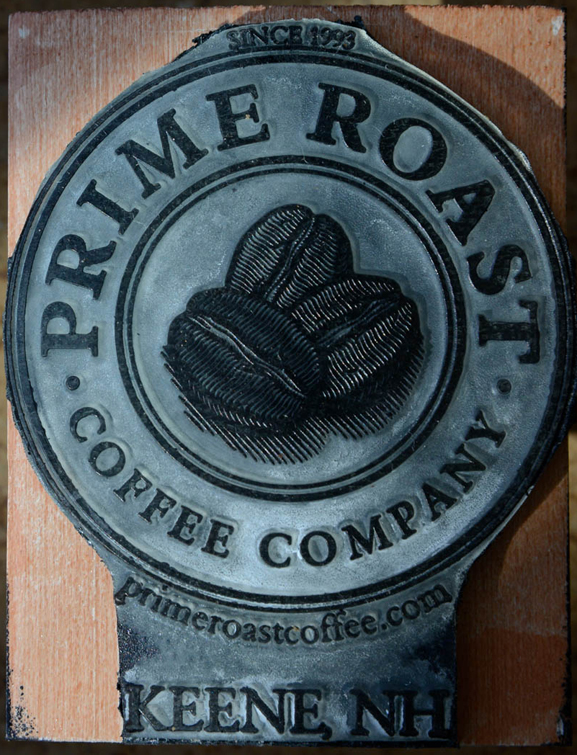 The stamp for Prime Roast Coffee Company is used on bags of coffee.

The passing traffic can hardly be heard inside the roastery because the interior walls are so well insulated. This also makes the building better able to hold the radiant heat of the super-efficient gas boiler. Add in the fact that the building’s lighting is 95 percent LED, and you get what Rogers says are “very low operating costs.”

The low operating costs eventually will offset the higher cost of renovating the old building, but the value of building green goes far beyond money. As Petrovick says, “The green movement has been the catalyst to make us think about every aspect of buildings, and how we can make them better places to work, live and play while minimizing their negative impact on the environment.”

Green is also good for business, especially when it involves a beloved old building. “Our company benefits from the goodwill generated by saving this magnificent building,” Rogers says. “People love this building, and so the love flows to us.” 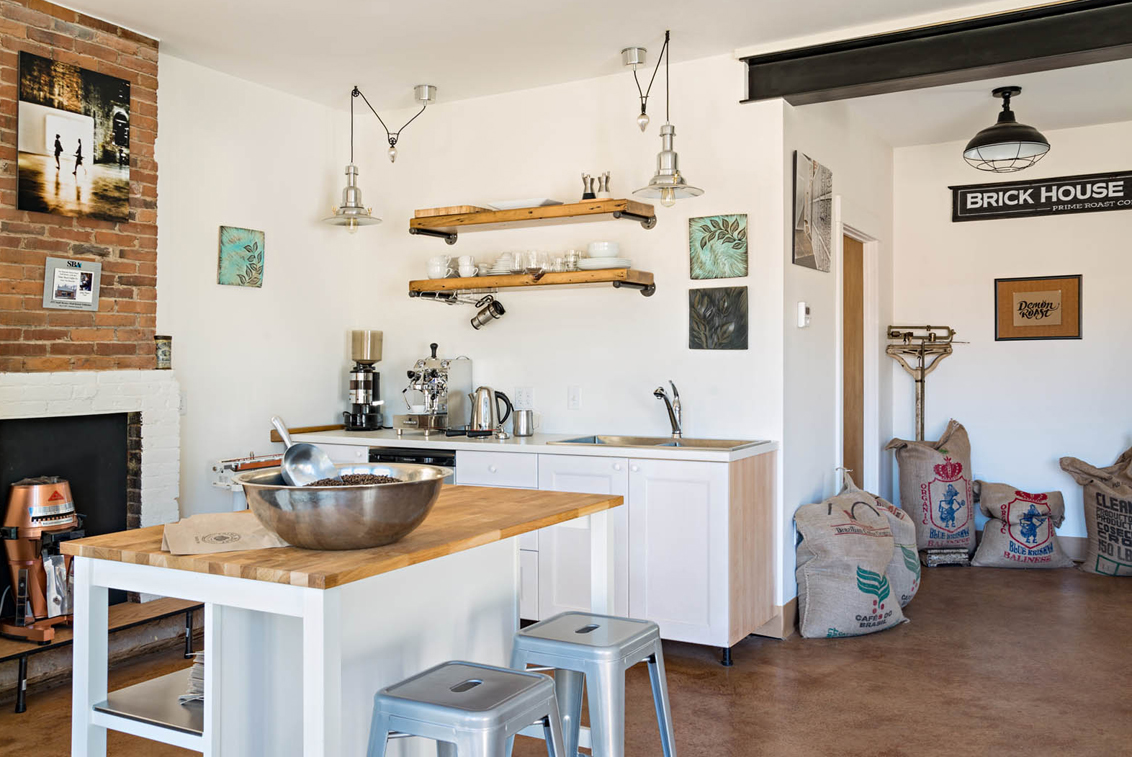 Rogers, who acted as her own interior designer, had the concrete floor painted in a warm tone, “like coffee splatter,” she says. 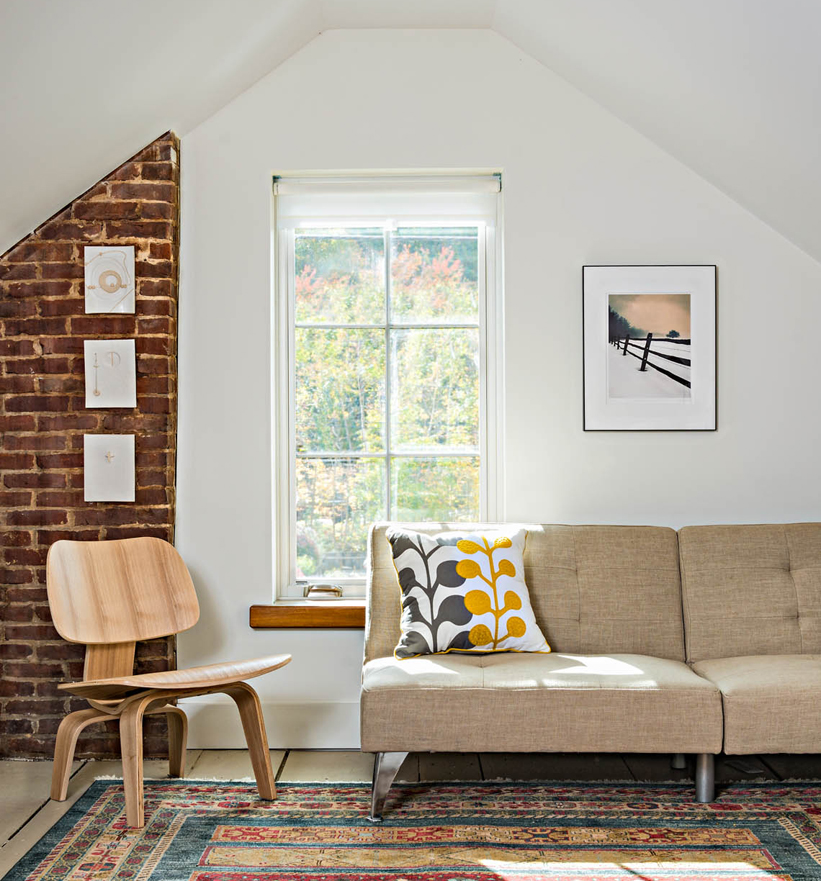 The second floor of the roastery is used for office and storage space. The brickwork of the original chimney provides an additional design element. 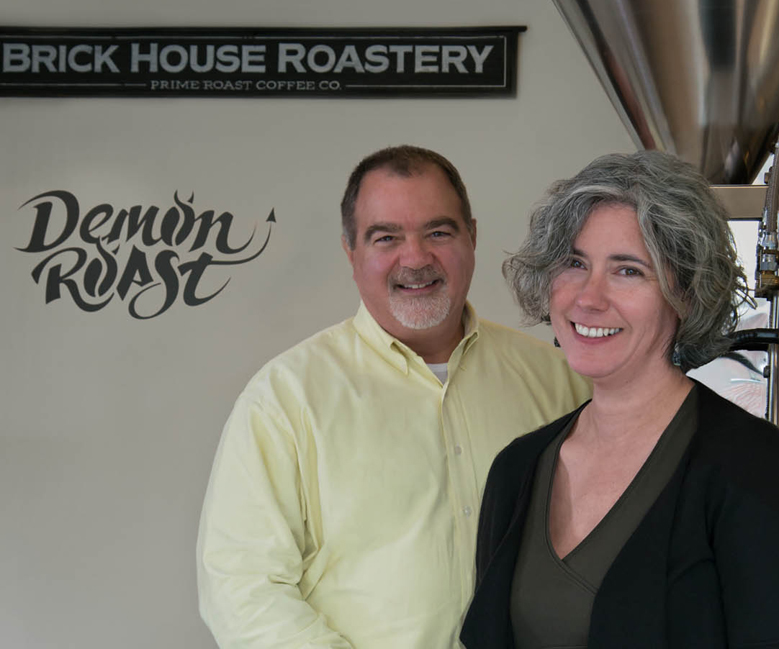