Restoring a Piece of Portsmouth History 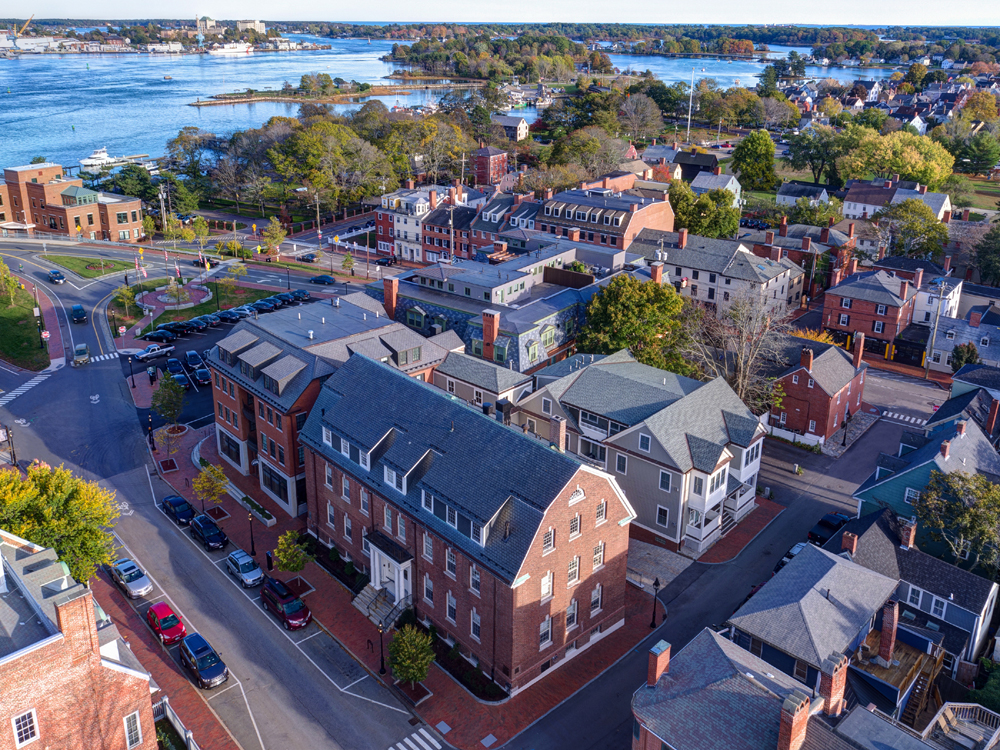 In a city defined by historic eighteenth- and nineteenth-century architecture, Piscataqua Landing—a residential and mixed-use development across from the Memorial Bridge in downtown Portsmouth—stands out. The three-building project captured New Hampshire Home’s 2018 Excellence in Historic Renovation award, and was designed by architect Carla Goodknight, of CJ Architects in Portsmouth; Steve Wilson, of Hampshire Development Corporation in Exeter, was the developer and general contractor. Both worked closely with the City of Portsmouth to ensure the project’s success and guide it through the approval process.

“The whole process—from design to city approvals and construction—went really well,” Wilson says. “We’re all pleased with how the project turned out.”

Rebuilding a piece of local history The cornerstone of the project is 135 Daniel Street, known locally as the former Army Navy Association building. Built in 1916 to house soldiers, sailors and military officers visiting Portsmouth, the building architecturally mirrors its neighbor across the street, the historic Warner House, built in 1716. A vibrant social center—there were once boxing matches held in the basement and an auditorium complete with stage on the second floor—the three-story, Colonial Revival Army Navy Association building was deeded to the city of Portsmouth in 1941. That same year, a gym was added and the building was renamed the Connie Bean Community Center, eventually becoming a beloved recreation center for local children and teens. In 2012, the City of Portsmouth relocated the Bean center to a new location and 135 Daniel Street was sold to Hampshire Development Corporation.

The team behind Piscataqua Landing included Steve Wilson, of Hampshire Development Corporation in Exeter, and Carla Goodknight, of CJ Architects in Portsmouth.

CJ Architects was retained by Wilson and Hampshire Development Corporation to design residential and mixed-use buildings suited to the architectural character of the neighborhood, a mix of eighteenth-, nineteenth- and twentieth-century structures.

The former gym was torn down to make room for two new buildings, 143 Daniel Street and 29 Chapel Street. “The existing gym walls created a barrier along the sidewalk that prohibited pedestrian access to the building,” Goodknight says. “Removing it opened up the space.” Old pieces of granite found during excavation of the site were later salvaged and reused to fabricate missing keystones in the historic Army Navy building.

The project’s greatest challenge, Goodknight says, was “creating three complementary buildings surrounded by brick alleyways that paid homage to the diverse historic neighborhood, while maintaining a single open space beneath the entire site for modern necessities.”

Alleyways connect the three structures above ground; below, there’s underground parking for residents, storage and a fitness center.

History in the details

Period details make 135 Daniel Street special. The building—with views looking over downtown Portsmouth— contains six residential, high-ceilinged apartments with lofts. The brick exterior has been restored and wood window sashes were preserved, along with the original glass. “When you’re standing at a restored window in one of the units and looking out through the same glass the servicemen were looking through many years ago, it’s fun to imagine what their view of Daniel Street may have been,” Goodknight says.

Residents and visitors enter the building via its restored central staircase with wooden banisters; semi-circular fanlights light up the third-floor spaces and the stairwell landing. Outside, copper downspouts and flashing add character, as do the granite keystones and arches. Custom iron fencing—modeled after existing historic details—frames new sidewalk planters.

Connected to 135 Daniel Street by paved walkways and framing a common courtyard, the two new buildings—143 Daniel Street and 29 Chapel Street—take their design cues from the former Army Navy Association building. 143 Daniel Street houses a retail space below four, spacious condominiums on three floors, featuring hardwood floors, fireplaces, and balconies overlooking the city or the nearby Memorial Bridge and Piscataqua River. Also housing four condominiums on three levels, 29 Chapel Street, around the corner, is a wood-framed, clapboard building that mirrors the Shingle-style bungalows once popular in the neighborhood. Comfort in the updates Anne Lapointe is a resident of 29 Chapel Street. She initially wanted to rent at 135 Daniel Street, but changed her mind after seeing the development and decided to buy. “The restoration is beautiful,” she says. “I work in Portsmouth, and I love being downtown and close to the river, Prescott Park, and the other cultural and musical offerings. I knew I wanted to put down roots here.”

Wilson says Lapointe’s comments aren’t unusual for Piscataqua Landing residents and others from Portsmouth. “I get a lot of compliments from people, especially folks who say it’s an example of making good building choices for the city,” he says. “I think the final result wouldn’t have been as special without the input of Portsmouth City Hall and the Historic District Commission. I enjoyed the process.”