Return of the native plants and flowers

Wildflowers were the natural choice when the Hewitts restored the woodlands surrounding their home. 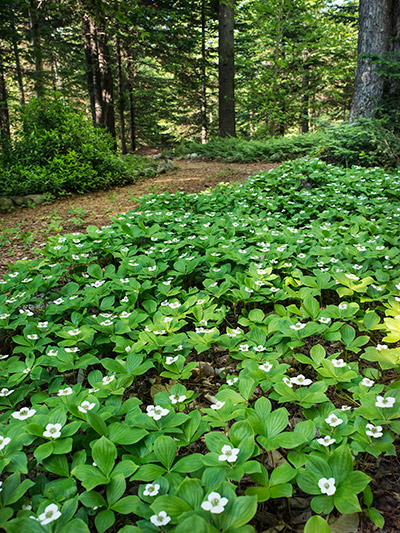 Aptly named the Bunchberry Path, swaths of white bunchberries thrive in the moist, acidic soil and dappled sunshine of the woodland garden. White, dogwood-like bracts surround the actual flowers, which turn to red berries later in the season.

When Thelma and Jack Hewitt bought their home—located high on a New London hill—in 2000, the property still bore the marks of the devastating ice storm of 1998. Downed trees, broken branches and thick brush made it almost impossible to step into the woods near the house. “We could be standing three feet apart and not see one another,” Thelma says. Coupled with the leftover slash and huge brush piles from logging done in the early 1980s, there was quite a mess to deal with, but the Hewitts knew the property had great potential.

As they cleared away fallen trees, burned brush piles and made openings in the debris, special native plants
began to appear. Working deeper into the New London woods, the Hewitts started building paths to connect the clearings where native flowers and understory plants were making a comeback. “Letting in a little more light made things decide to wake up and grow,” Thelma says. Velvet-leaved blueberries, native dogwood, pink and yellow lady-slippers, ferns, starflower, clintonia and painted trillium started to appear, and the woodland walk started to take shape.

The Hewitts’ partnership is an ideal one. Jack has an eye for the big picture, knowing which trees should stay and where the mini-meadows should be, while Thelma focuses more on the ground-level details. “Once the junk was gone, we could work on editing what was not of interest and adding plants to the ones we found,” Thelma explains. This was where her knowledge and love of native plants could bloom.

No stranger to wildflowers, Thelma has long been a member of the New England Wild Flower Society (NEWFS). She first visited Garden in the Woods, NEWFS’s botanic garden of native plants in Framingham, Massachusetts, in 1969 with her young children and was amazed by the beauty of the plantings. To learn how to care for the many native plants growing at their home (then in Dover, Massachusetts), she took a class taught by Kathryn “Kitty” Taylor, longtime NEWFS president and a founding member of the North American Rock Garden Society (NARGS). Thelma ended up volunteering in Taylor’s garden.

“She trained me well,” Thelma says. “I learned only the Latin names and how to care for the plants. It was not only an education but an honor to work with Kitty, and we became good friends.” 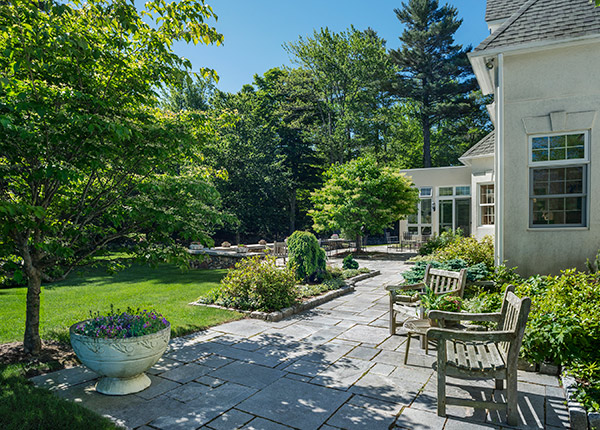 The back terrace, designed by Kristian Fenderson of Acworth, is the perfect spot for entertaining. Plantings include a Kousa dogwood on the left, a bed of dwarf conifers with a weeping hemlock in the center and a tree lilac in the square bed near the conservatory.

After the Hewitts moved to Woodstock, Vermont, Thelma was instrumental in the project to save the Eshqua Bog, in Hartland, Vermont, from development; she and Jack helped maintain trails and construct boardwalks there. She was made a NEWFS honorary trustee after having served for twenty-eight years as a trustee and many years as treasurer. In 2009, she organized The Fells Chapter of NARGS, of which she is president and has served twelve years on The Fells board of directors.

“The key to success with native plants is putting the right plant in the right place,” she says. So in New London, she took full advantage of the acidic soil and dappled to full shade to add plants that were suited to the existing conditions.

At the entry to the woodland path, there are four species of trillium, pink lady-slippers, jack-in-the-pulpit, native Pachysandra procumbens, Carolina rhododendron, deer-resistant Pieris floribunda and Phlox stolonifera. “I like to have a lot of variations of plants of the same genus,” Thelma says, as she points out the many types of ferns and species of Solomon’s seal.

The Bunchberry Path is aptly named for the carpets of bunchberries that line both sides and even extend into the path in spots. “They were called Cornus canadensis but have been renamed Chamaepericlymenum canadensis, a name that is larger than the plant,” Thelma says with a laugh. Some other early spring bloomers are bloodroot, twinleaf (Jeffersonia diphylla), mertensia and trailing arbutus. 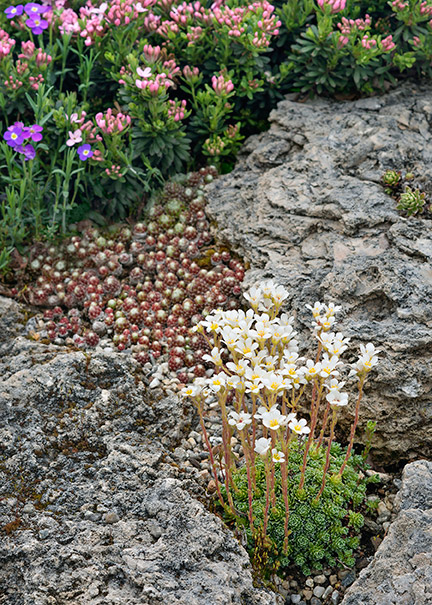 The rock-lined path, which is wide enough for Jack’s tractor to pass through, continues south past partridgeberries; Galax urceolata with its glossy green leaves; its cousin Shortia galacifolia; primroses; campanulas; a spreading silverbell tree; the unique-looking, white, one-flowered wintergreen (Moneses uniflora); and pink twinflowers. There is a slope of rhododendrons including R. maximum and R. catawbiense, some late-blooming azaleas, and kalmias ‘Olympic Fire’ and ‘Keepsake’.

In the opening where several paths converge, a sitting area is located behind an island planting that includes hepatica, double pink anemonella and shooting star (Dodecatheon). From here, the azalea path loops back toward the northeast. Rare plants, such as Anemone multifida, grow along with azaleas, Carolina rhododendrons, fothergilla, enkianthus and creeping snowberry. Golden-star (Chrysogonum virginianum) is repeated in several locations because it blooms longer than many plants and tolerates a wider range of light.

There is a hidden picnic room, complete with table and chairs, that is carpeted with twinflowers and bordered with more rhododendrons, tiarella, fringed polygala, double white trillium ‘Flore Pleno’, leucothoe ‘Silver Run’ and bloodroot. “The pink lady-slippers, which don’t like to be moved, just put themselves along the edge of the path once the light was right,” Thelma says. “The effect is quite magical.”

Read more by clicking the arrows below

The path through the woodland garden eventually breaks out of the shade and leads to the sunny rock garden north of the house. This northeast-facing slope was once a dumping ground for stumps, trees and rocks that were cleared away to build the house. “It was a mess,” Thelma says. “You couldn’t even walk in there without suddenly sinking up to your hips.”

The slope is quite steep, so Landforms Limited of Bow was called to bring in soil. Thelma and Jack laid out the rocks for the planting beds and Landforms’ landscape architect Peter Schiess positioned the larger stones and built several sets of steps. The northeast orientation is perfect for a sheltered rock garden. “The snow blows in here in the winter, protecting the plants from damaging freeze-thaw cycles,” Thelma says. “It is the perfect habitat for alpines.”

As is the case in the woodland garden, Thelma has more plants in the rock garden than can possibly be included in this article, but a few of her favorites are the ramondas—hardy plants in the African violet family that she tucks sideways into rock crevices. This keeps water from pooling in their centers and rotting them. She has a huge colony of red trillium, daphnes, lewisias in many shades of pink, dwarf Korean fir (Abies koreana ‘Cis’), mini-hostas and Iris cristata. There is a carpet of black crowberry (Empetrum nigrum) underneath the group of slow-growing Yakushimanum rhododendrons and two beautiful Japanese maples—one red, the other green.

One section of the rock garden is tufa rock, perfect for lime-loving alpines. “The soil is very well-drained, but the porous tufa holds just the right amount of moisture for these gems,” Thelma says. She has planted seeds in cracks and in holes she drilled in the rocks, and is experimenting with tucking some plants into vertical crevices between upright stones and others between horizontal stones to see what works best. In this area, she grows many varieties of little saxifrage plants that bloom early in the spring. There is a bench is at one end of this garden where Thelma and Jack, who don’t do a lot of sitting since they do all the maintenance and gardening themselves, will take a minute to relax and enjoy the tiny primroses and gentians when in bloom.

Near the barn, there is a semi-circle of “traditional” perennials, including peonies, astilbes and Thelma’s great-grandmother’s yellow rose. Jack loves this garden, but Thelma says she does more work on this small planting than on all the rest of the gardens combined. “Woodland natives are truly low- or even no-maintenance plants. Many of them bloom early in the spring and then fade away gracefully—no deadheading or cutting back necessary,” she says.

At the rear of the house is a wide stone terrace created by landscape designer Kristian Fenderson of Acworth. The terrace features a low wall on one side that doubles as extra seating when the Hewitts entertain or host garden-club tours. In planting beds at one end of the terrace, Thelma showcases some of her dwarf conifers—such as weeping hemlock (Tsuga canadensis ‘Pendula’), Chamaecyparis obtusa ‘Nana’ and C. pisifera ‘White Pygmy’—that contrast nicely with the blue of Picea glauca ‘Blue Pygmy’ and yellow-tipped Picea orientalis ‘Tom Thumb’. 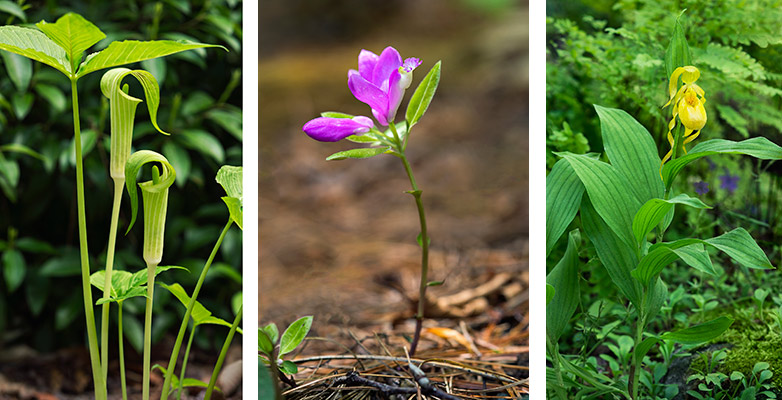 Left: Jack-in-the-pulpit (Arisaema) is an adaptable grower but it is most at home in a moist, woodland environment. Center: Purple fringed polygala, also called gaywings, is often mistaken for an orchid. Right: Yellow lady-slippers grow in the hidden picnic room garden and have popped up along the path leading to the rockery.

The conservatory borders on this terrace and close to its foundation, Thelma has narrow beds holding some of her choice plants: anemonella ‘Schoaff’s Double Pink’, which blossoms from early April into July; double white trilliums ‘Flore Pleno’, which Jack says are spectacular in bloom; and gentians, which were gifts from Thelma’s friend, author Larry Newcomb. There are globe daisies (Globularia cordifolia), which “bubble up like blue pom-poms,” Thelma says, and evergreen phylliopsis ‘Sugar Plum’ with long-lasting pink flowers early in the spring. “The soil here is super-well-drained,” she says, “perfect for alpines and tiny rock garden penstemons.”

As you can guess, deer love these gardens and can do a bit of damage. The Hewitts use a product called Liquid Fence to deter the animals. Thelma and Jack also have problems with voles and porcupines. On the positive side, the native plantings provide food, nectar and habitat for other local wildlife, birds, butterflies and insects.

The Hewitts enjoy their property year-round and have developed more than two miles of trails in the woods for hiking and snowshoeing.

It seems only fitting that in 2010, the Hewitts won an award from NEWFS named for their friend: the Kathryn S. Taylor Award for Private Gardens. 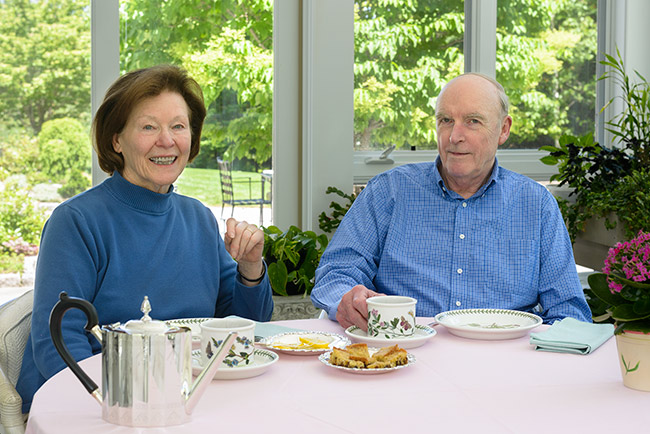 Thelma and Jack Hewitt often eat their meals in the conservatory where they can enjoy year-round views of some of their gardens.
Categories: Gardening & Landscape