An emblem of New Hampshire's rural past gets a new life for the twenty-first century. 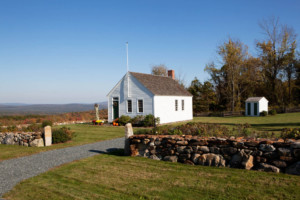 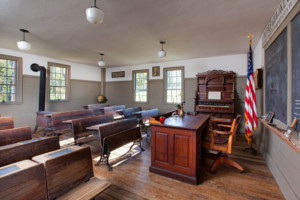 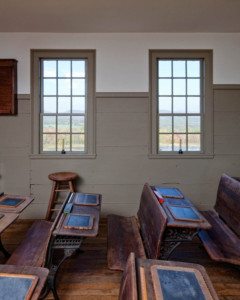 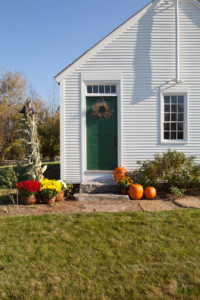 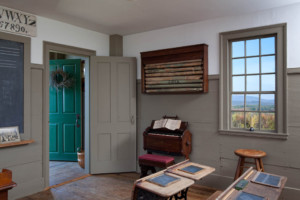 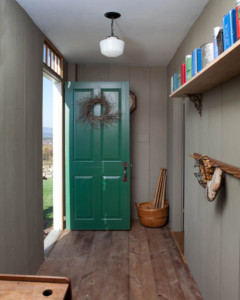 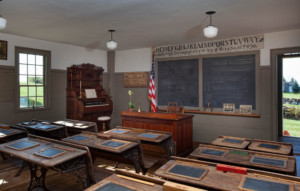 With each year, the structure-one of Gilmanton's original one-room schoolhouses-was succumbing to weather and age. In 2008, Towle acquired the schoolhouse, which then had been used by the state as a salt and sand storage shed for its highways, and moved it to Frisky Hill across the road. The schoolhouse took its place at the painstakingly restored homestead, which also includes the 1665 Farley Garrison House [see Relocating History, New Hampshire Home, May/June 2012]; a water tower; a barn and corn crib; an ell connector; and a carriage shed.

"The restoration of the schoolhouse was extensive," Towle says. A foundation of cut stone was prepared, and the hand-hewn timber framework and wall studding had to be repaired or replaced to bring the building back to square. The overhaul included repairs to the roof, interior woodwork and sheathing on the side wall.

What Towle discovered through the process was that the schoolhouse was built earlier than previously thought. Henry Page of Henry Page House Restoration Consultants, Inc. dated the building to the late 1700s based on its physical construction: the framework was of hand-hewn timers joined with oak wooden pegs, pit-sawn exterior sheathing, hand-split lathing and blacksmith-forged rosette nails.

Towle says when the building was used as a salt and sand shed, the front façade had been altered to include large doors. However, he was able to undo the alteration by following the building's 1909 photograph, which was provided by Gilmanton resident Cliff Stockwell's grandmother, Nellie May Ellsworth Clifford, a former teacher.

With the expertise of builder Justin Caldon of Four Corners Construction, whom Towle has known for decades, the schoolhouse was restored inside and out. Antique hardwoods from the Gilmanton Academy, located in the town's Historic District, replaced old pine boards for flooring.

Towle then furnished the schoolhouse with student desks he found in a one-room schoolhouse in Pennsylvania. The students' desks are varied in size, with the smallest desks in the front for the younger grades and becoming increasingly larger to the rear of the room. All the desks are in original, unfinished condition and outfitted with pencil boxes, rulers and ink wells. Also, hard-grade slate tablets are on each desk with a pencil cut from solid pieces of softer grade slate (or soapstone).

The room has a bookcase filled with original geography, math and history textbooks from the late 1800s; an original dictionary on a swivel stand; a map of the United States with U.S. possessions from the late 1800s; framed wall portraits of George Washington and Abraham Lincoln; a terrestrial globe; a twelve-foot wooden sign with the alphabet; a child's Mason-Hamlen Missionary field pump organ with stool; a full-sized cherry pump organ; and large, slate blackboards from Vermont.

In the front of the room is an original, walnut, raised-panel schoolmaster's desk with a built-in, pull-out slate for the teacher to make notes. On this desk are an original Bible from the Gilmanton Academy; a long, wooden pointer (known to be used for discipline when needed); an early stapler; and, of course, an apple.

Hanging on the wall is an original reading chart from Gilmanton (before "Dick and Jane"); and the prize piece is a Rand-McNally wooden wall display with a series of eight pulldown maps from before 1900. Towle even installed an antique bell similar to one that would have beckoned students to class.

Gilmanton Historical Society (GHS) President John Dickey described the building's transformation: "It's a loving restoration of that building," he says, adding that every detail is accurate. He says Towle visited the GHS Museum and reviewed archival photographs of buildings and schoolhouses. "The restoration is very correct to the period," Dickey says.

Because of hardships in transportation across rural areas in Colonial times, it was common to have several one-room schoolhouses in a town, serving multiple grades. Dickey says the Gilmanton area actually had eighteen schoolhouses (at one time, Gilford and Belmont were one town; Belmont incorporated in 1859, and Gilford in 1812).

"There were so many schoolhouses due to such a large geographic area," Dickey says. The town still had six one-room schoolhouses up until 1939; at the end of 1940, four schools were closed and two schools were consolidated into one.

Towle's schoolhouse closed in 1920, and several years later, the school district auctioned off the building. For much of the twentieth century, the building was owned by the New Hampshire Department of Transportation.

With Towle's restoration of one of the town's original schools, visitors can take a walk back through time.