A second home on another continent might sound inconvenient, but the trip from Christian Stroop's home in Frankfurt, Germany, to his rural Grafton getaway is only twelve hours door-to-door. The recently restored circa-1770 Georgianstyle house sits on a quiet hill far from the bustling European city where Stroop works in financial services.

The Peter Bullock House is located on approximately 120 acres in what used to be the town center of Grafton. The home has stunning views of the New Hampshire countryside, with Mount Cardigan visible in the distance. The threethousand-square-foot house with paned windows and a center chimney has strong, clean lines that were a large part of what first attracted Stroop to the property. Unlike many older homes that gain additions and ornamentation over time, this one looked relatively the way it must have when first built. "The original Georgian character was undisturbed," Stroop says. "The house was standing there in its entire pure beauty."

The reason why the Bullock house has remained architecturally undisturbed for nearly two and a half centuries has a lot to do with its location. In the early 1770s, Benjamin Bullock and his son Hezekiah were among the twelve original settlers of Grafton. The house they presumably built (there aren't any definitive records) and definitely came to occupy was at the very center of town life; running past the house was the main coach road from Concord to Hanover. When the Grafton Turnpike was constructed just down the hill in the early 1800s, the building served as a farmhouse and a tavern for travelers. Stroop points out that at this point in history, the surrounding area was "utter

wilderness," and the Bullock place must have been a welcome spot for eating, drinking and spending the night. 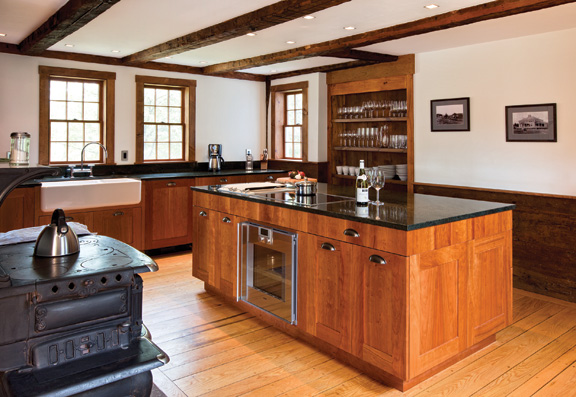 The kitchen design is sleek and modern, with the exception of the circa 1920s stove in the left foreground. The stove was there when Christian Stroop bought the house and is still in working order.

By the 1830s/1840s, however, Grafton town life had shifted to its current location a few miles away on what is now Route 4; the house was no longer useful as a way station. Hezekiah's son Peter Bullock, for whom the house is named, struggled with farming and the deaths of his children before his own death in 1871, leaving no local descendents.

the Bullock family and was left behind by development. Where the home had once stood near busy thoroughfares, it was now on a remote country road. In the first part of the twentieth century, the building served as a guest home for summer visitors before being purchased by Swedish emigrants, who owned it through two generations until 1972. The house was neglected during the 1970s and 1980s, then was bought by owners who did their best to maintain it before selling it to Stroop. Over all these years, none of the house's owners seems to have been inspired or have had the financial means to make sweeping changes to the structure. This inactivity is part of what contributed to the home's historical preservation.

When Stroop bought the Peter Bullock House in 2008, it had maintained its austere Georgian style outside and, for the most part, inside. There is an attached barn, three upstairs bedrooms as well as a kitchen, dining room and sitting rooms downstairs. The five working fireplaces lead into the one, large center chimney. The house also has its original floorboards, some a foot and a half wide, and much of the original wainscoting. 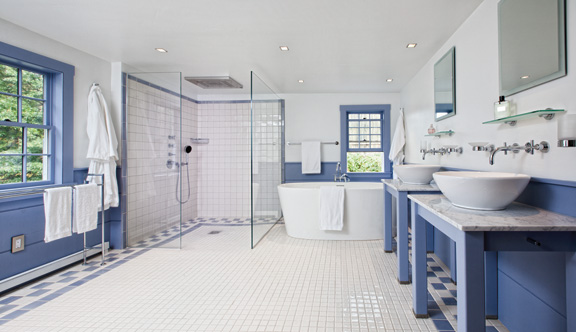 While not eighteenth-century in terms of materials and design, the master bathroom has a spare aesthetic that is in keeping with the rest of the décor.

Stroop discovered Grafton while searching for a vacation home several years ago. At that point, New Hampshire was only one of many possible locations. He was attracted to the relative availability of land in the United States (as compared with Europe), and the East Coast seemed a fairly practical choice in terms of travel time to and from Germany. After narrowing his focus to New England, he spent a few weeks traveling from the coast of Maine to as far west as Lake Champlain in Vermont, looking at one or two houses a day, until he found the house on the hill. The Bullock property not only had good lines and a storied background (Stroop is a history enthusiast), the building appeared to be in relatively decent shape inside and out.

Like many houses, however, it contained a few surprises. "Despite its nice looks, it needed a profound overhaul,"

Stroop says. A preliminary scan with an infrared camera revealed some areas of "uncontrolled air infiltration," as well as framing bays with little or no insulation, according to Katie Sutherland, who handled the renovation of the Bullock house for Stroop. Sutherland is an associate architect with Daniel V. Scully Architects in Keene.

The true extent of the damage became clear when the crew-Stroop had hired G.R. Porter & Sons of Norwich, Vermont, as a contractor-began to dig into the house, discovering that a portion of the first-floor framing was rotted. Eventually the house had to be taken down to the beams.

There was a plus side to this, however: "We gave the house a 'coat,'" Sutherland says. Foam insulation was sprayed into all the wall cavities. Clapboard siding was removed so the rotted board sheathing could be replaced underneath, and new clapboard designed to match the old was added where needed. The roof turned out to be in good shape, and insulation was applied to its underside as well. The basement-built with huge boulders and lacking much in the way of drainage or moisture barriers-needed work. The stone foundation was dug out; insulation, drainage and backfill installed; and the floor was sealed with a moisture barrier.

Throughout the entire project, most of the new framing and other carpentry materials were made from reclaimed wood, much of it from the house itself. The floor, for example, was originally double-layered. As such, the construction crew was able to remove one layer, which provided plenty of wood for extra projects. Stroop was especially pleased to be able to rescue the windows, most of which were between eighty and one hundred years old. Window Master of Dublin, which specializes in this kind of work, double-glazed the windows to give them better insulating properties. The two oldest windows in the house were left as they were; storm windows were added. New heating and electrical systems were also installed throughout the home.

An old home in a new land

Once the renovation was finished, Stroop handled his own interior design, with an eye toward simplicity. Wood is the central design element: the floors are uncarpeted, the paned windows are without treatments and the beautiful, weathered wainscoting around the fireplaces has been left in its natural state. The low ceilings consist of dark wooden beams with plaster between them.

Although the interior design scheme is not relentlessly Colonial, it's possible that if an individual from the 1700s walked into the house, he or she wouldn't feel terribly confused, except in the very modern master bathroom (which is tiled in white and blue, and features an open shower and vessel sinks). The kitchen, too, has modern appliances, most them hidden away in the center island or in counters, but there is one anachronism: a huge iron stove that dates to about the 1920s. It is in working order but not put to daily use.

Stroop and Sutherland agree that the biggest challenge of the project was the discovery of all the restoration that needed to be done. "Of course, there are always surprises," Stroop says. "You always find some rotten beams that you had not expected." With this knowledge, he took the necessary changes in stride.

"The success of the project," Sutherland says, "owes a lot to its client. He wanted to do everything the right way."

Although Stroop says he originally wanted to be closer to the ocean, Grafton-despite a slow Internet connection-has turned out to be the perfect location. It is located about two hours from Logan Airport in Boston and only half an hour or so from Dartmouth College, which offers intellectual diversions. Stroop has also met fellow financial-services executives with vacation homes in the area. And he only needs to step outside to go crosscountry skiing or hiking.

It's a decided contrast from the busy environment he inhabits on the other side of the ocean. He has photographs that compare the northwesterly view from his home in Frankfort with that of his home in Grafton. The former shows skyscrapers lining the Main River in Frankfurt; the latter, a moose standing in a field.