See How Wallpaper Can Transform a Room

Aside from adding pattern and color, wallpaper can also take hold of our senses and change how we view our spaces

It’s well-known that wallpaper can spice up a room with pattern, but it also has a few other tricks up its sleeve. Depending on the design or even materials that go into making it, wallpaper can alter how we perceive spaciousness, light levels and movement and can create a sense of cohesiveness — or isolation — in a room. To me, good interior design is an art form. That’s why I studied both subjects, and earned degrees in fine art and interior design, deepening my understanding of how color, pattern, texture and form work together in interior spaces. And that’s why I believe you can use wallpaper to work wonders in any room. Here’s how.

Use This Wallpaper for a Timeless Design 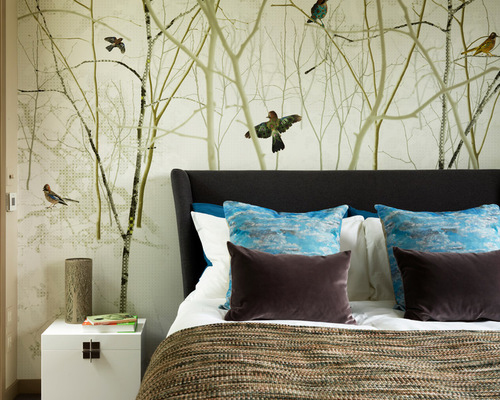 1. Alter a sense of spaciousness.Unlike a flat, painted surface, many wallpaper patterns have a spatial component that makes a room appear larger or smaller in size, if even a room at all.

Many scenic wallpapers lean on the use of artistic perspective.Objects closest are larger in size and darker in value. Receding away, the imagery diminishes in size and value, or becomes lighter. The wooded-landscape pattern of the wallpaper shown here brings a feeling of spaciousness far beyond the limitations of the wall.

By adding the appearance of volume, shading is another way wallpaper can create a semblance of space. Shading an object makes it look three-dimensional, and this trellis design appears to have thickness. The flat area behind could read as sky or air, giving the sense that there’s an expanse behind the trellis.

Not all wallpaper will make a room look bigger. If the imagery lacks a background, or negative space around it, the room will feel closed in and intimate, especially if the pattern is large.

In the right room, this can be a good thing if you’re aiming for coziness or a bold statement. If not, the imbalance between positive and negative space can create the feeling of confinement for some folks. Here, lush palm fronds appear to invade the powder room as if it’s part of a dense, tropical jungle.

2. Create the impression of movement. There are countless wallpaper patterns out there, but the more dynamic options create a sense of movement. One of the elements of art is line, and diagonal lines convey movement rather than repose. Designs using diagonals, like this bedroom wallpaper, read as active and full of life, like the angle of an airplane thrusting into flight. 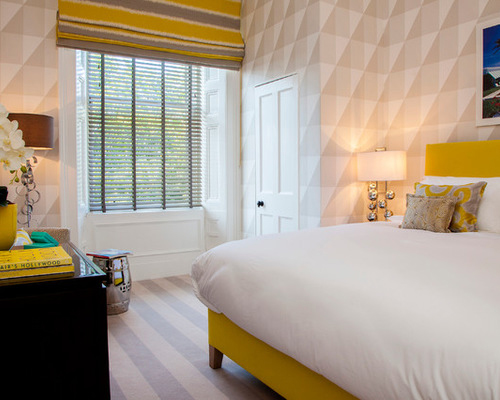 Random wallpaper designs also have a sense of energy about them that aren’t found in designs with an obvious, repetitious pattern. The sporadically placed goldfish in this example look as if they might swish by and change direction at any moment.

Far from diagonal or random, this graphic wallpaper pattern creates an optical illusion of rounded forms bulging off the wall. Bold and intricate designs such as this are best in a pared-down, minimalist space. 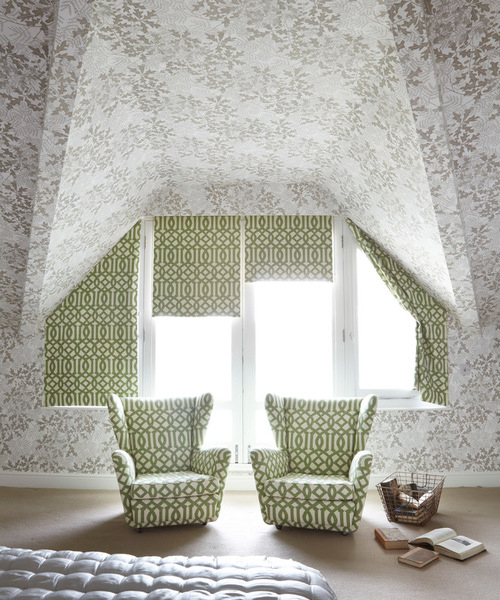 3. Downplay or highlight architectural components.Curvilinear forms, such as those in floral patterns, exude a sense of softness that can tone down harsh lines or create a more relaxing atmosphere.

For example, the leafy wallpaper in this space blurs the angles between wall and ceiling by creating foliage “lines” that wrap around the different planes. The light color palette helps the softening effect too.

Horizontal stripes are my favorite way to create the illusion of width, seen here in this narrow powder room. Wallpaper with level stripes wrapping around a perimeter stretches one’s vision past the planes of the wall, making the room seem wider than it really is.

On the other end of the spectrum, some wallpaper patterns can emphasize existing architectural details, or in some cases create the semblance of architecture that doesn’t exist. In this sunroom, a trellis wallpaper pattern not only emphasizes the height of the angled ceiling, but also hints that it’s physically helping to support it.

Which Wallpaper Suits Your Room?

4. Alter the level of illumination. It’s likely that there’s a room in your house that isn’t perfectly lit. Some spaces lack windows and power sources for light fixtures. One venerable decorating trick for under-lit rooms is to use a mirror to bounce light around. But mirrors have size limitations, and seeing one’s reflection may not be desirable in some spaces.

On the other hand, some rooms are flooded with so much natural light that the space can lack definition. Flocked wallpaper, like this one, has velvety fibers applied to create a dramatic and unique light-absorptive pattern, something that can’t be achieved with paint.

5. Unify or isolate a space. Wallpaper patterns move one’s eye throughout a space, bouncing from one design to another. When installed on all four walls, the experience is continuous, making the entire room visually engaging and cohesive. 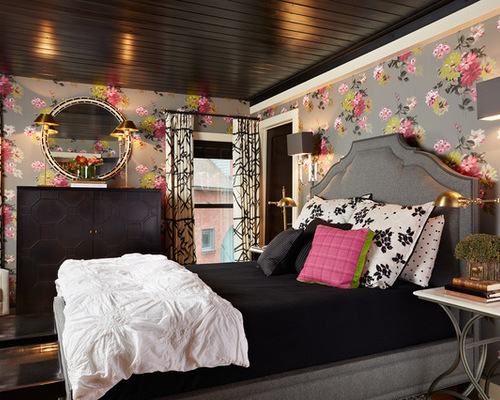