These plants are perfect for those with not-so-green thumbs. 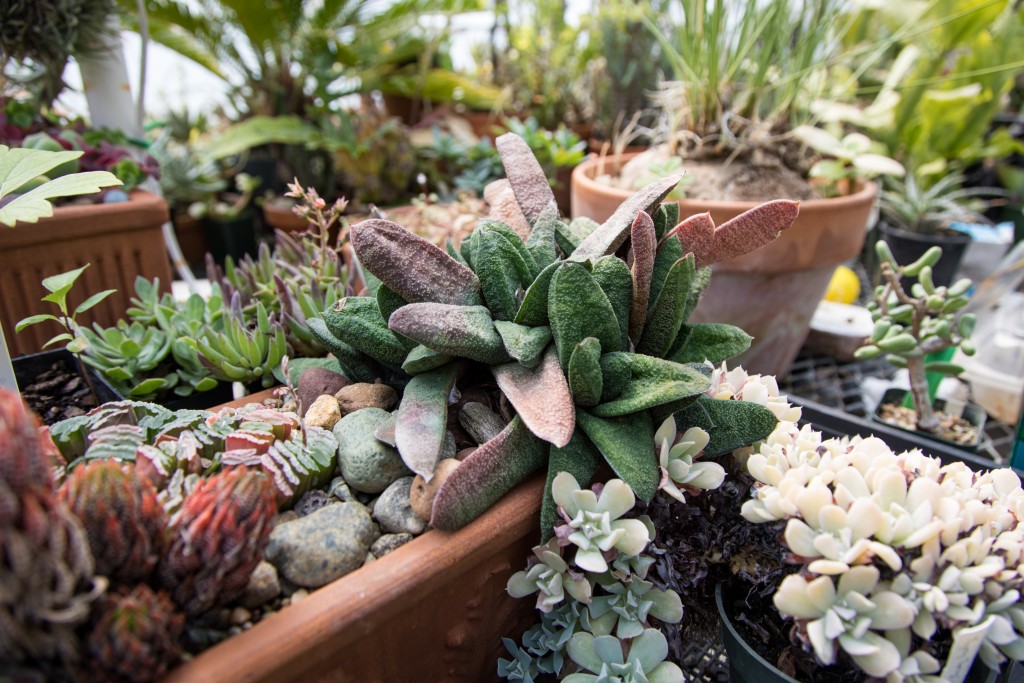 Art Scarpa of Atkinson has had a lifelong obsession with succulents. He says it all started when he was a young boy living in East Boston. “From the time I was a kid, I went to the Boston Flower Show,” he says. “One year, when I was about 10 years old, someone there was selling what he called a Curtain Plant—a leaf that would miraculously grow if you just pinned it to a curtain in a sunny window. Well, I had to have that! Turns out it was a Bryophyllum, a plant that has the almost-magical propensity to form baby plantlets along the edges of its leaves.” It would be hard to find a plant easier to care for than that. This oddity drew him to start collecting other types of succulents.

Lately, succulents have become the trendy plant to grow—and rightly so. They are unique-looking; many are inexpensive and readily available; and given the right growing conditions, they are very low maintenance. Like living sculptures, they come in a broad range of leaf forms, textures and colors. Some even blossom. If you are having trouble keeping houseplants alive, give a succulent a try.

Succulents are a group of plants, native to arid regions around the world, that have the ability to store water for long periods of time. Not constrained to a single plant family, this trait is found in a wide variety of easy-care plants, including cacti, sedums, kalanchoes, aloes, agaves, euphorbias and others from 60 plant families. Some, like the aloes, store water in their fleshy leaves. Plants without leaves, such as cacti, store water in their thick stems. Others store water underground in their bulbous roots. Often called the camels of the plant world, succulents are resilient plants that thrive on neglect. 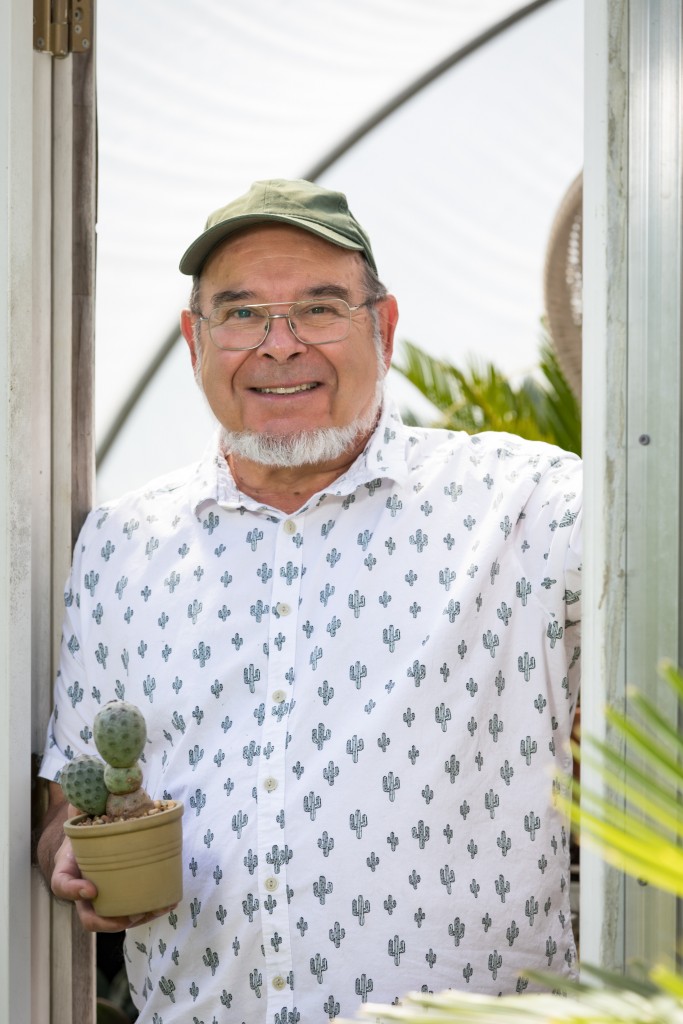 Art Scarpa—in one of his signature cactus-patterned shirts—has been collecting succulents and cacti for over 60 years.

Scarpa says the secret to success with succulents is knowing the conditions in their native lands. He has traveled the globe, visiting habitats in remote areas of South America, Australia, South Africa, the Rockies and the U.S. Southwest desert. “It gives you great perspective on how to care for these plants,” he says.

He has seen them thriving in extremely harsh conditions. “Haworthia are really tough,” he says. “Indoors, we fuss over them, but I have seen them growing out of a crack in a boulder in South Africa where they only get an inch of rain a year.” On a trip to Namibia, he found plants growing and blooming in an area that had not had any rain in two years, winter fog being their only source of moisture. “Once you know where these plants come from, you’ll know how to take care of them,” he says.

As houseplants, more succulents die from overwatering than underwatering. “If in doubt, don’t water,” Scarpa says. Generally speaking, most only ask for a bright sunny spot on your windowsill and a bit of water—never more than weekly. Some are actually dormant in winter and need even less.

A fast-draining potting mix is a must. Use one formulated for cacti and succulents, or add coarse sand and perlite to a regular potting soil to lighten it up. “Look for one with very little peat,” Scarpa says. “It tends to hold too much moisture.” Never let them sit in water; soggy soil and wet roots mean certain death.

Many succulents have fibrous roots and do best in a shallow, clay pot.

For beginners, he says any succulent you find at your local nursery will be a good starter plant. “Even the ones at the big-box stores, if you can get them before the staff kills them,” he laughs.

Scarpa says not to be afraid of killing a few plants. “Sometimes you have to learn from your mistakes. You’ll soon figure out which ones do best for you and which ones to avoid,” he says.

Some of Scarpa’s favorites are cacti, haworthia, euphorbias, lithops, small agaves and gasteria. “They are all really tough plants,” he says. “As long as you give them the right conditions, they are easy to grow. Small cacti, such as Mammillaria, are sure bloomers.”

A hobby that started with one plant has grown to fill a 16-foot-by-28-foot greenhouse. “I use every inch of it,” Scarpa says. “My mantra is anything worth doing is worth overdoing.” He estimates he has between 3,000 and 4,000 plants. “I love propagating them from leaf or root cuttings, so a lot of them are tiny,” he explains. “One positive point is that some are dormant in the winter and others in the summer, making less to care for all at once.”

Many spend the summer outdoors, and not all his succulents need to be wintered inside. He also has a rock garden full of succulents that are winter hardy in New Hampshire.

A founder of the Cactus and Succulent Society of Massachusetts, Scarpa says, “The best part of this hobby is sharing it with others.” Pre-pandemic, the club met monthly in Norfolk, Massachusetts, with members bringing in plants to show and ones to share. They raffled off donated plants, and usually everyone went home with a new plant or two.

“We encouraged kids to attend by giving them plants,” he says. One boy who started attending meetings at age 6 with his mom is now in college and had a summer apprenticeship with a world-renowned grower. “He retained his interest in plants,” Scarpa says. “It is a healthy habit!”

Since Covid-19 hit, the group has swapped in-person meetings for Zoom presentations given by succulent experts, but still have outdoor meetings and events, weather permitting. “Thanks to the club, I have a circle of friends from all over the U.S.,” he says.

Now that he is living in New Hampshire, he would love to see a local club. “Maybe a tri-state one for northern Massachusetts, New Hampshire, and southern Maine.” Scarpa is a certified show judge and popular speaker at garden clubs. He has given Zoom presentations as well. 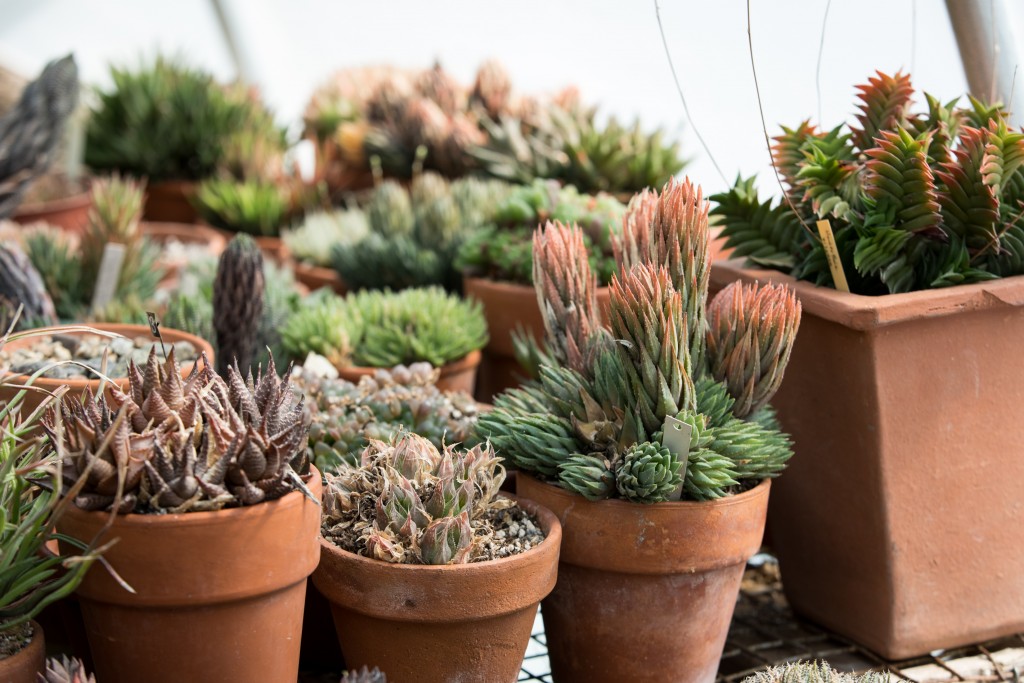 Scarpa recommends growing succulents, like these Haworthias, in terra cotta containers that allow the soil to dry faster than it would in a plastic or ceramic pot.

Making a succulent dish garden for the holidays

Scarpa has led many a garden club through the steps of making of a dish garden. It is an easy project, fun for kids and adults. Succulents have long been considered as symbols of tenacity, perseverance, growth and enduring love, making the finished mini-garden a great gift for the special someone in your life. This year, give a gift that grows!