Shingle-Style house is a labor of love

Vision and perseverance helped a Dublin couple build the mountain-view house of their dreams.

The story of how Bill and Susan Barker built their house in Dublin would make a good movie, something along the lines of the 1948 Cary Grant film Mr. Blandings Builds His Dream House. The story began in 1997, when the Barkers bought twenty-five acres of land in Dublin on short notice, and ended in 2003 with a beautiful house facing Mount
Monadnock. Between the beginning and the end, however, were not only the usual sorts of challenges that homebuilders face, but accidents and serious illnesses that might have derailed less cheerful and determined individuals. To add to the plot, the Barkers built most of the house themselves, sometimes learning by trial and error, but always learning and moving forward.

The Shingle-Style house—designed by architect Dan Scully of Daniel V. Scully/Architects in Keene—sits low to the ground on a plateau at the top of a ridge. Its dark shingles, numerous gables and green trim reference Dublin’s “great summer period,” according to Scully. The north side, which is the entrance, has just a few windows. On the south side, the house is filled with windows (the entire structure is about 40 percent glass, Bill estimates) that let in views of Mount Monadnock and the surrounding forested landscape.

The Barkers moved to Dublin in 1968. Bill, a local executive, always had an eye on this particular piece of land about a mile from his former house, but he never expected it to be for sale. One day, he heard the land was on the market, so he and Susan bought it immediately, without knowing much about it.

They assumed there was potential for a view of Mount Monadnock, but they couldn’t be sure because the land was wooded. “It was very dense,” Susan says. In 1997, they started to log, and the region’s eponymous mountain appeared as expected.  In all, about five-and-a-half acres of trees were cleared to make room for the house, driveway and surrounding yard. The lumber was sold to offset the cost of the clearing, so this exercise paid for itself, Bill says.

In terms of an overall vision for the house, the Barkers were inspired by the work of architect Charles Platt, a member of the Cornish Art Colony who moved to Cornish, New Hampshire, in the 1890s. Platt was a proponent of the so-called “American Renaissance” in architecture and landscaping that took place during the late 1800s and early 1900s. “Platt’s houses have a great relationship with the mountains,” Scully says. The Barkers wanted their house to be low to the ground, like many of Platt’s designs, and facing Monadnock. They also liked the H-shaped floor plan common to the architect’s work.

“We spent a lot of time thinking about what we wanted,” Bill says. The Barkers decided to hire Scully because he had worked on their home in Dublin, which had been designed by local architect Sandy James in the 1950s. That house had “a bit of a camp feel to it,” according to Scully, who redesigned it to include a Greek Revival-Style
living room. 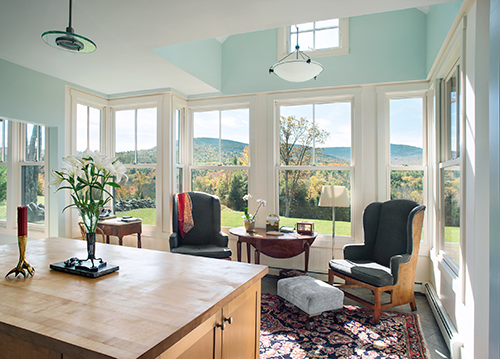 A comfortable sitting area adjoins the kitchen (a work island is in the foreground) so people can keep the cooks company.

The Barkers’ new house’s H-shape creates a recessed entry with two flanks on the north side and an “embrace” of the mountain on the south. Scully says that although visitors see the mountain when approaching the house from the driveway, that view is hidden on entering the house until passing into the south-facing living areas, where Mount Monadnock makes a big impression.

In 2001, the Barkers put their house on the market, and it sold almost too quickly—before they had another place to live. They moved to a cottage in Harrisville, and then while their house was being built, to the top floor of its garage, which they furnished with most of the comforts of home, including a refrigerator and a microwave.

The house-building began in earnest in 2002. The Barkers were involved from the beginning—there is a picture of Susan with a laser level, standing in the pit that was built for the foundation. The house was framed in January of that year. In addition to the wood frame, some steel beams were required for the long, high ceiling line. One steel beam is sixty feet long and runs the length of the house. Wood alone could not support this length, Scully explains. Building in the dead of winter came with its challenges. Bill recalls having to use leaf- and snowblowers to clear the snow that sometimes accumulated in the house.

Although the Barkers worked with local contractors for projects such as framing and sheetrocking, Bill was the lead contractor on the project. Being retired with many of the necessary skills, he was a good fit for the job. He acquired his skills, he explains, growing up in a family that enjoyed the concept of “recreational work.” In other words, he spent many weekends and summers learning to fix and build things.

Among the tasks Bill and Susan performed were applying all the cedar shingles; doing all the interior finish work, including trim and painting; and installing the Trex walkway outside. They also purchased their own materials—or “stockpiling,” as Susan refers to it—by taking advantage of sales at Hamshaw Lumber in Keene, which the Barkers describe as an invaluable resource.

And they had accidents. In 2002, Susan stepped on a piece of plywood covering an open area. The plywood gave way, and she fell into the foundation, breaking her arm. A steel rod had to be inserted into her arm, and she was some months recovering. Then in 2003, when the house was mostly finished, Bill broke his thumb working on the sink in the powder room. A routine operation to set the thumb triggered a heart attack. From there, he was rushed to another medical facility, where he had a small stroke. A couple of months later, he was back working on the house. “It wasn’t severe, and it didn’t debilitate me,” he says. Besides, says Susan, “Nothing was going to stop us.”

The house was finished in 2003. Its layout incorporates a light and airy south side with walls of windows and doors in the living room opening to the back deck. There are two bedrooms upstairs, plus a potential bedroom area downstairs that could become a suite for one-floor living with the removal of a wall.

The large kitchen includes a work island and a pleasant sitting area next to the windows; Susan insisted this space be incorporated so those working in the kitchen aren’t isolated from the rest of the family. The kitchen also has a room that divides it from the attached garage, another idea of Susan’s: “This way the stuff that comes in from the car can be dropped off before it makes it to the main house,” she explains.

A good-sized dining room was another prerequisite. The windows on the east wall offer excellent views and sunlight for the container plants that line the entire wall. The west-facing sun room, which the Barkers call the “sunset room,” has a tiled floor and also many plants. A notable feature of the living room is a bas-relief from the Latchis Theatre in Brattleboro, Vermont, over the fireplace. The artwork is sunk into the mantel just slightly so the figures appear to be dancing on its surface.

Bill points out that some of the great things about doing so much of the construction themselves were that they didn’t have to work according to other people’s deadlines or always have to use new materials. “When you’re doing it yourself, you can do things that aren’t ordinary,” he says. One example involved a 1920s sink in German (or nickel) silver that he picked up in White River Junction, Vermont. The sink is unusual—a slim, rectangular design divided by a curvy piece of metal. The plumber Bill was working with at the time wanted nothing to do with installing it, so Bill did it himself. The sink is now in the corner of the living room, where it serves as a wet bar.

Learning to love the deer

The house’s spectacular setting—a plateau from which the land falls steeply away toward the woods below and the mountain in the distance—serves as the bulk of the landscaping. This is not because the Barkers don’t enjoy gardening, but because the deer enjoy what the Barkers plant. The house is surrounded by grass and seven types of flowering trees, but otherwise, Susan—by nature, an enthusiastic gardener—makes do with a few daffodils and her indoor plants, some of which do go outside for the summer.

She doesn’t resent the deer—in fact she has made the best of it by becoming a deer watcher instead of a gardener. It’s a small price to pay for everything else: the privacy, the view, the house that she and Bill wanted.

And building the house themselves—accidents, illnesses, learning curves and all—is not something the Barkers regret. Looking back, Bill says, “It was a great experience.”