A Francestown plantsman falls for these ornamental garden buildings. 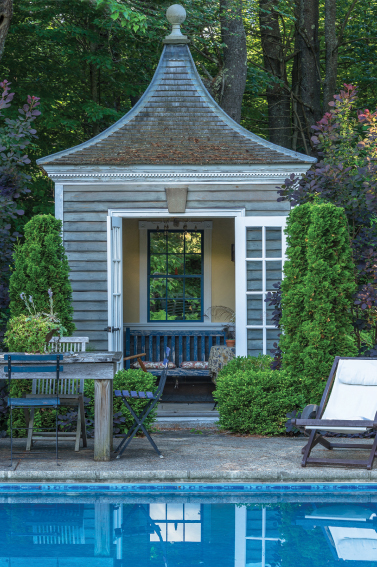 In 2009, Joseph Valentine built this folly to replace a shed that housed the pool filter.

Sometimes, you just have to bask in the beauty of something— admiring a great work of art in a museum; oohing and ahhing at your loved one all dressed up for a special occasion; delighting in the first flowers of spring. Beauty certainly is in the eye of the beholder—especially for aficionados of garden follies.

These treasures are rare gems because they were constructed primarily for aesthetic reasons without concern for cost. Unlike other structures we see in landscapes today—garden sheds, pool houses, garages and so on—follies don’t necessarily have a purpose other than dressing up the landscape. Like runway models, follies are all about their good looks.

You can find follies in gardens throughout Europe. But as the website for The Folly Fellowship in England says, “Follies are perhaps the most resonantly British form of architecture—they embody our passion for stylish eccentricity in a way no Georgian or timbered Tudor beauty can.”

Follies have been a feature of great English gardens for hundreds of years, and typically took the form of Greek or Roman temples, ruined Gothic abbeys, Chinese pagodas, or Japanese bridges. Today’s follies include gazeboes, small cottages and rotundas. “Follies excite strong emotions,” says British architectural historian Gwyn Headley, who co-authored Follies: A National Trust Guide. “They are buildings designed for pleasure and, for me, they retain this extraordinary ability to please.”

When it comes to homes and gardens, New England has deep roots to old England. Architecture in England inspired building styles here—Georgian, Colonial Revival, Gothic Revival, Stick, Queen Anne and Tudor. Many of the great New England gardeners also took cues from their English counterparts—from the more formal designs of Sissinghurst or the landscape gardens like Stourhead, to the less formal but no less beautiful cottage gardens of the Cotswolds.

Two great English gardens in Gloucestershire in the Cotswolds made a lasting impression on plantsman Joseph Valentine—the classic, Arts and Crafts style of Hidcote Manor, created in the early twentieth century by the American horticulturist Major Lawrence Johnston, and the innovative Highgrove House Gardens, which have been created by Prince Charles during the past thirty years according to organic and sustainable methods.

“What began as a retirement hobby quickly became a passion,” Valentine says about the gardens he began working on in 2004. Five years earlier, he and his wife, Paula Hunter, bought Juniper Hill, a thirty-acre property in Francestown. Back then, the landscape consisted of bare lawn, a pool and a small shed. Neither Valentine nor Hunter had gardened seriously—their area of expertise was in high tech.

But once he was bitten by the garden bug, Valentine began to learn everything he could about garden design and history. “The two most important things you can do—in addition to just getting out there and putting your hands in the soil—are to study gardens and visit as many gardens as you can,” he says.

The more he read, Valentine says the influence of English gardening style was “inescapable.” He was drawn to the Arts and Crafts style that combines formal elements with more informal plantings; it also emphasizes the use of natural materials and incorporates a design that transitions from formal around the house to wilder meadow or woodland areas farther away.

“This year marks our fifth trip to England to visit gardens over the past seven years or so,” Valentine says. “We often return to some of our favorite gardens, just to see what’s new, but we also try to include a few gardens we haven’t yet seen.”

When he’s not visiting other gardens or tending his own, you can find Valentine with a camera in hand. He’s become an accomplished garden photographer, documenting his own and others’ gardens, and his work has been published in the United States and abroad.

Today, Juniper Hill has two acres of gardens designed in a style Valentine calls “country formal” and separated into garden rooms with different themes. The gardens are so extraordinary that they have been on numerous garden tours, including those sponsored by the national Garden Conservancy organization.

Near the original, gambrel-roofed house built in 1789 are a decorative garden with raised beds for greens and herbs as well as a seating area where Hunter and Valentine like to have their morning coffee. Across the driveway—which curves around the mid-nineteenth-century barn—is a formal lilac garden; next to it is a path leading down stone stairs to a lower garden with a frog pond. Walk back up the path and behind the barn to see multiple garden rooms that lead to the pool garden.

In the pool garden and in the lower garden are where Valentine built two follies inspired by similar buildings—one at Hidcote Manor and the other at Highgrove House.

Valentine’s follies were serious ventures that took time to plan and build. They are not exact copies of the buildings at Hidcote and Highgrove but rather, as Valentine likes to describe them, “New England interpretations.” And although the buildings are beautiful, they are not entirely ornamental as both function as places to sit. “When Paula and I bought Juniper Hill Farm, I knew I’d be doing things myself, like building the small buildings and fences,” Valentine says. “I’ve always enjoyed working in my shop in the barn.”

The folly inspired by Hidcote Manor

Valentine built his first folly in 2009 to replace the wooden shed that housed the pool filter. “A branch came down in an ice storm and wrecked the building,” Valentine says. A light bulb came on for designing a replacement, as he had always loved the garden pavilions at Hidcote. There two brick buildings face each other at the end of a red border; on the roof are stone tiles. 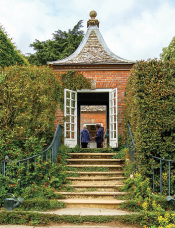 Joseph Valentine’s design for his folly (right) was inspired by the one at Hidcote Manor in Gloucestershire, England

Though Valentine did most of the construction himself, he says, “Some things were beyond my pay grade.” So he turned to builder Eric Grenier, a neighbor in Francestown, to help him with the curved roof, which sticks out above a curved hedge. “Eric built a plywood model of the roof to ensure we got it right,” Valentine says.

The building is centered between two trees, and lines up with the pool and its axis, marking the entry to this garden. There are cedar shingles on the roof and a bluestone keystone that’s purely for decoration. Even the floors are made from bluestone. The finial has a bluestone cap, and Grenier made a scallop pattern in the lead piping on the four corners of the roof.

Inside is a bench along with a small table and chair—and a chandelier. “Although this building is mainly for decoration, you can go in there at night and read,” Valentine says.

The folly inspired by Highgrove House

Valentine visited Highgrove twice and was taken with its pair of unfinished oak follies that look like Greek temples—they were designed by Isabel and Julian Bannerman for Prince Charles. “I love the look of Greek temples, which were very popular in formal English gardens,” Valentine says.

Valentine’s main challenge was figuring out the dimensions and scale for his temple. On his second visit to High- grove, he took a tape measure and hoped the tour guide would let him take measurements for the building. But he wasn’t able to and had to resign himself to working from photographs.

The Royal Gardens at Highgrove
highgrovegardens.com

When he began building in 2016, Valentine used rough-cut hemlock and cedar shingles on the temple’s roof. “The fresh-cut hemlock beams came from a local sawmill and were heavy, so I recruited my friend, Karl Smizer, to help cut and lift them,” Valentine says. Inside are two chairs and a small twig table. “Prince Charles has an ornately carved bench in his,” Valentine says with a chuckle. Like the building at Highgrove, Valentine’s interior is finished and painted above the chair rail. A wooden sun hangs on the wall.

“Choosing the wall color was not easy,” Valentine says. He originally wanted a gold color that would stand out or a raspberry color like the one at Highgrove. He tried many colors on the hemlock—“all of them looked terrible,” he says—and figured out that the yellow hue of the natural hemlock just wasn’t working with many of his color choices. “I wound up using the same color that’s on my barn,” Valentine says. “It’s not as bright as I’d wanted, but it works.”

At Highgrove, the temple’s pediment is decorated with white roots the Bannermans found washed up on the shores of a Scottish loch. For his pediment, Valentine literally reached for the roots of his property’s namesake and gathered twisted, sun-bleached branches from the junipers that had been growing at the edges of his field.

Valentine’s temple looks out on the frog pond he built in 2012, and he and Hunter like to sit inside. “The pond has a bubbler in the center, and we enjoy listening to the frogs,” he says.

When asked if he has other follies planned for his garden, Valentine answers, “I’ve got to stop.” But admirers of his gardens hope otherwise. 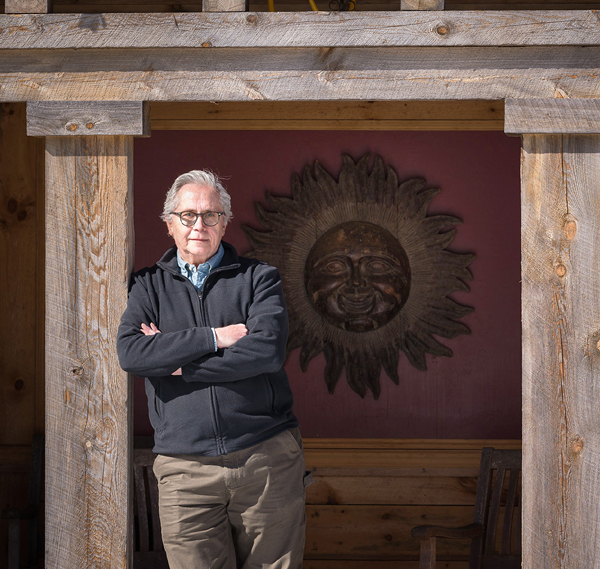 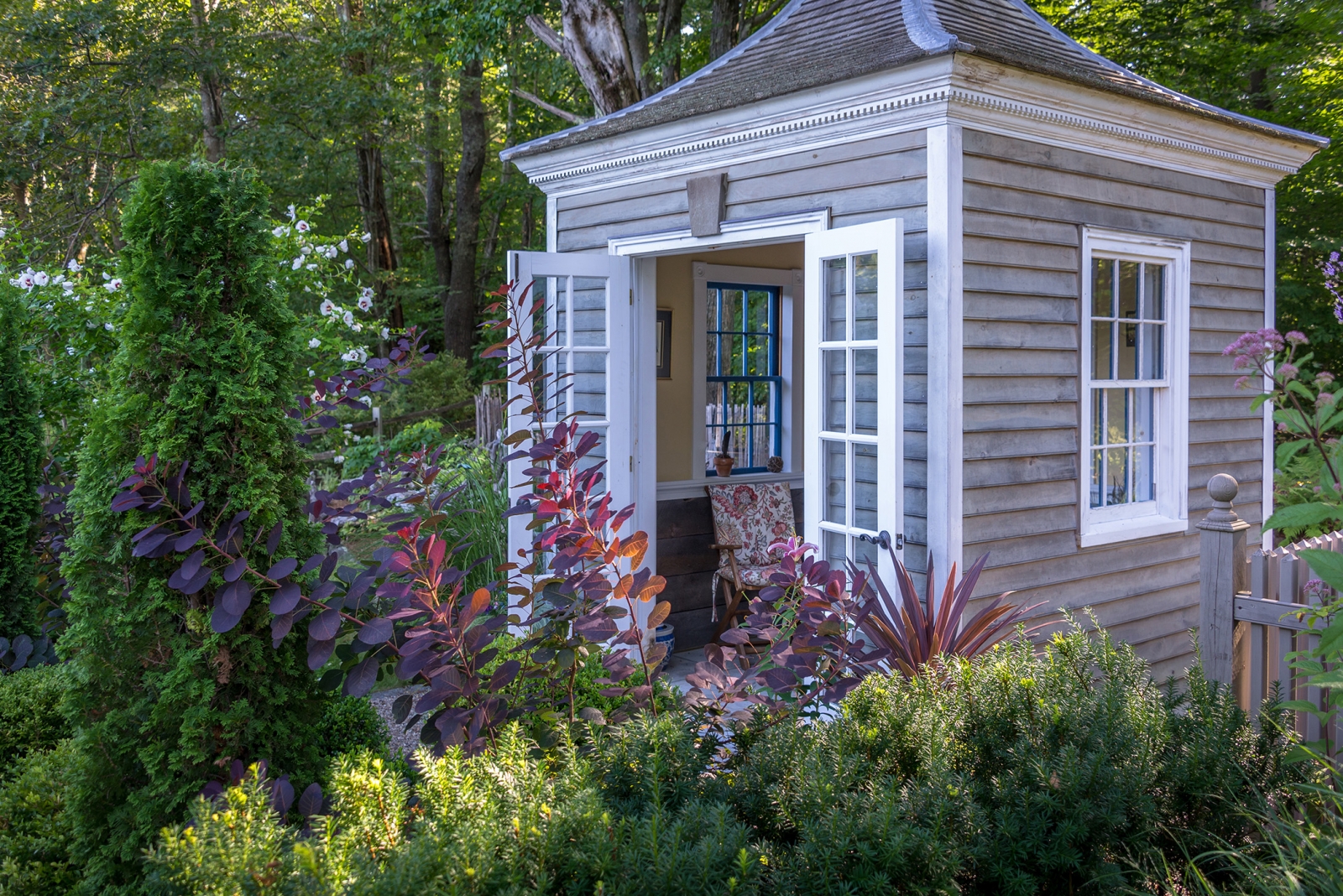 Valentine’s folly is clad in clapboard with cedar shingles on the roof. Inside is a bench, small table, chair and chandelier.
Joseph Valentine’s temple folly (middle) took its design cue from the one at Highgrove House Gardens (left), which was designed by Isabel and Julian Bannerman for Prince Charles; the sculpture is by David Wynne. Valentine’s folly, made from rough-cut hemlock, looks out on the frog pond he built in 2012. Inside are two chairs and a small twig table, and a wooden sun (right) hangs on the wall.
Categories: Gardening & Landscape