A passion for stargazing grew into finding the perfect spot to build an observatory, powered by solar energy. 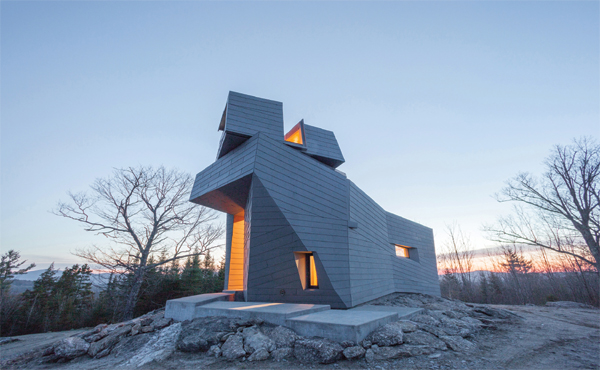 The angular design of the Gemma Observatory echoes the central New Hampshire rocky landscape around it, as does the building’s granite-gray color.
It was designed by Anmahian Winton Architects in Cambridge, Massachusetts.

It all started on a sailboat. One day, while sailing with his father-in-law, a Massachusetts man who wishes to be unnamed in this story tried his hand at celestial navigation. Using a sextant, he measured the angles from the stars, planets, moon and sun to the horizon, in order to chart the sailboat’s location on the water. To do so, he needed to be able to identify the stars by name.

As he studied the star names in the days that followed, a passion for stargazing was ignited. As he says, “Celestial navigation really lit the fire for learning about the sky. That we can use a centuries-old method to figure out our position on the Earth was amazing.”

He started reading about astronomy. He bought a telescope.

“Then I was packing my stuff into a car and driving to escape the city light pollution,” he says. After trying a few spots within an hour or two of his home in Boston, he settled on southern New Hampshire as the place to see the stars. “I liked the empty parking lot at Crotched Mountain in Bennington or a stalled housing development near a golf resort there.”

Eventually, he joined the New Hampshire Astronomical Society and used their observing field in central New Hampshire (its exact location is known only to members). He says that made him feel less like a trespasser and more like an astronomer. But still, each time he wanted to see the stars, he would have to make the drive and then spend as long as ninety minutes setting up his gear. And then take it all down and drive back.

After moving to the Boston suburbs, he decided to build a small astronomy shed in his back yard so he could leave his equipment set up and just roll back the roof. But still, trees blocked much of the sky and the Milky Way was barely visible because of light pollution.

He began a quest to escape the lights and have an unobstructed view of the sky. He superimposed maps of light pollution onto Google Earth, and found that, by driving two hours from his home to a part of central New Hampshire, he would find the dark sky and open spaces he wanted. Plus, there were family-friendly ski mountains nearby. It was, he says, “a sweet spot for me.”

That sweet spot would soon be the site of his Gemma Observatory. The design of the observatory—named for the brightest star, the gem, of the constellation Corona Borealis—would not only accommodate his stargazing, but also create a place where “even if you don’t care a lick about astronomy, you would want to hang out there.” Most of all, he wanted it to be a place where family and friends could “sit under a giant sky filled with thousands of stars and imagine the vast miracle of the universe that surrounds us.”

To make that happen, he enlisted the services of Anmahian Winton Architects in Cambridge, Massachusetts. The project—a collaboration with the architects and Scott Estabrooks of Patriot Painters & Builders in Chestnut Hill, Massachusetts—would become a big award-winner; ten awards in all, two of them for green architecture. Among them are awards for design excellence from the Boston Society of Architects in 2016 and the American Institute of Architects (AIA) in 2017.

In fact, one of the first things on the site was a solar panel array. Nine panels set on the south side of the hill would provide most of the energy for the observatory (a generator helps with heat in the winter); the array’s battery bank even powered many of the tools used during construction.

“I would like to think this off-grid system teaches the kids something about living responsibly, not wasting energy,” the owner says. “The system has such capacity that we could leave the lights on and radio going all day and night forever.” Only in the winter, when heaters are used, is the backup generator required.

The stunning design of the observatory is one that evolved. “It started as a very simple box,” says Mazen Sakr, one of two architects (Alex Anmahian was the principal in charge) who led the project. 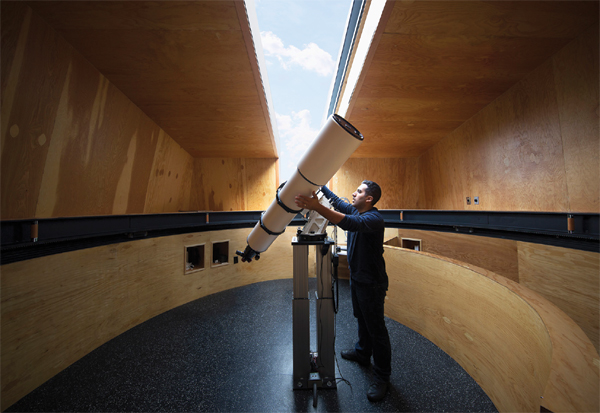 With the dome open to sky, winter viewing can be challenging due to the cold. The color of the fir-lined walls helps create a feeling of warmth. Project manager Mazen Sakr of Anmahian Winton Architects adjusts the telescope.

“But then,” Sakr says, “we got inspired by the rock outcroppings, the geometries of the site, and we started pushing and pulling the form to have it be responsive to the site’s geographic context and, at the same time, stand out as different type of observatory.”

The result is a remarkable angular structure that is designed to accommodate an astronomer’s needs as well as mimic the color, patina and striations of the surrounding gray granite landscape. This was achieved with an unconventional pattern of lock-seamed zinc cladding and a terraced concrete platform that transitions between the natural bedrock and man-made elements.

Most of the structure’s distinctive features—“oddball things,” the owner calls them—have a practical basis. For example, the sharp southeast corner optimizes the location of the deck pier; the tall, skinny window frames the vertical motion of the North Star; and the giant door helps the area under the dome to cool down quickly.

.Heat mitigation is a big issue for observatories. “With just a little magnification,” the owner says, “when you’re looking through warm air rising, you see a shimmer effect, kind of like the mirage you see looking down a straight highway on a summer day.”

In addition to opening the giant entry door, the temperature can also be equalized by opening the dome, which is reached by a helical stair, as well as a nearby door and window. That allows a lot of heat to escape—but, as the owner says, “it also means it is freezing up there in winter.”

The need for wintertime warmth is accommodated by the adjacent, one-story warming room—a place to hang out, sleep or do research. Its location to the east ensures that heat doesn’t migrate upward into the dome. In addition, the room is superinsulated with structural insulated panels (SIPs). Adding to a feeling of warmth there, and in all the interior, are fir-lined walls.

A large deck sits atop the warming room, providing another space for observation in addition to the primary viewing area in the dome. One challenge for the architects was to eliminate vibrations that might affect the dome’s telescope. The solution: isolating the piers that hold up the telescope from the rest of the structure.

Sakr says the piers are tied directly into the concrete foundation, which in places is seven feet high: “All that mass gives the piers enough stability so there’s no direct translation of vibration.”

Now the owner, his quest satisfied, is enjoying his “sweet spot” under the sky in comfort, marveling at meteor showers, tracing out the spiral arms on galaxies and “seeing bright star clusters glitter like jewels.”

Asked if he thinks astronomy could get people to focus more on the larger world around us, he invokes the Voyager probe’s image of the Earth as a tiny pale blue dot and quotes Carl Sagan: “There is perhaps no better demonstration of the folly of human conceits than this distant image of our tiny world. To me, it underscores our responsibility to deal more kindly and compassionately with one another and to preserve and cherish that pale blue dot, the only home we’ve ever known.”

Each of the distinctive features of the observatory is there for a reason. A tall, narrow window at the top (right), for instance, frames the vertical motion of the North Star. An observation deck (left) provides additional space for stargazing.
Opening the giant entry door (right) allows the escape of warm air that can create an  unwanted shimmer effect in telescopes. The large observation deck allows family and friends to enjoy the night sky in comfort.
Categories: Architecture and Interiors, Going Green, Green Design & Living