Stop and smell the roses at Fuller Gardens

The years from 1890 to 1940 are considered the “golden age” of American estate gardens, but fortunes rise and fall, and many of those elegant old gardens have all but disappeared. Luckily for us, Fuller Gardens in North Hampton is an excellent example of an early-twentieth-century estate garden that has not only survived but continues to thrive, thanks to the excellent management and care it has received over the years. Home to approximately 1,700 rose bushes, Fuller Gardens also has huge perennial borders, flowering trees, an outstanding dahlia collection, a Japanese garden, lots of hostas and a long row of espaliered apple trees.

Located just off Ocean Boulevard on Little Boar’s Head, the gardens were part of Runnymede-by-the-Sea, the summer estate of Alvan T. Fuller in the late 1920s. The most successful auto dealer of his day, Fuller became a congressman and served as governor of Massachusetts from 1925 to 1929. He was widely known for his philanthropy, which continues today through the Fuller Foundation.

The gardens began as a source of cut flowers for his estate and the summer homes of his four children. Originally designed by landscape architect Arthur Shurtleff (who later changed his last name to Shurcliff), the gardens evolved during Fuller’s lifetime. The circular rose garden was added in 1930 by Cherry Hill Nurseries, and the large front garden was designed by the Olmsted brothers in 1938. Although the front garden was meant to be seen and enjoyed from the street, the garden is also an example of “false perspective” where the back of the garden is narrower than the front, making the space appear longer than it actually is. To further fool the eye, the statuary at the rear of the garden is three-quarter sized, and plants with finer leaves are planted at the rear of the space to make them look farther away. That said, the Olmsted brothers also needed to ensure the space was beautiful when viewed from the estate’s second-floor bedroom, since Mrs. Fuller ventured into the garden only about three times a year! As such, the sunny front garden features roses as well as formal English borders that are filled with perennials and annuals such as delphiniums, coneflowers, astilbe, salvias, cleome and hollyhocks to name just a few.

After Alvan Fuller’s death in 1958, the gardens were opened to the public. The two-and-a-half- acre plot has endured the years and is in perfect condition today thanks to the expert care the gardens have been given.

Jamie Colen, who has been the Fuller Garden director for fifteen years, favors an organic approach, saying the secret of success is the quality of the soil. “Feed the soil so the soil feeds the plants,” he says. “Healthy plants will resist insect infestation.” Whenever the gardens are open, there aren’t any power tools in use, so you can visit any time and not be subjected to the noise of lawn mowers, hedge trimmers, leaf blowers or weed whackers. It is like taking a step back in time and greatly adds to the enjoyment of the gardens. 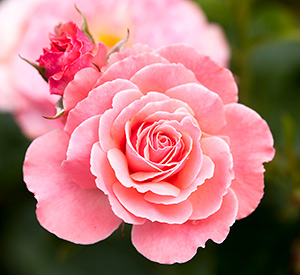 To keep your roses as healthy as this pink ‘Carefree Wonder’, Fuller Gardens director Jamie Colen advises against using bark mulch. “It is too acidic, hides soil conditions, can harbor insect eggs and generally causes more problems than it solves,” he says.

The roses are especially spectacular; every color and type imaginable are represented. “We have about 125 varieties, so the bloom time is staggered, making for a colorful display from June until October,” Colen says.

Since Fuller Gardens is a test garden for the American Rose Society, this is the perfect place to see some new varieties in action. If you are thinking of adding a new rose or two to your garden, come here first and do a little research. In the formal rose garden, you will see fragrant English roses, hybrid teas, shrub-types and old garden roses; all of them are labeled. The beds are laid out in a circular Colonial Revival–style pattern set off by grass pathways. On one side is a privet hedge, and on the other side is a row of espaliered apple trees on a cedar fence enclosing the space. “The hedges give the gardens a feeling of privacy and also help to block the winter winds,” Colen says.

Fuller Gardens also maintains a glass conservatory that is home to some tropical and exotic plants that most other New Hampshire gardeners can only dream of growing. A giant staghorn fern is located at the entry. Pots of begonias, scented geraniums, orchids and succulents crowd the benches, and the cacti collection is impressive. A huge Jasminium polyanthum is growing out of the floor, up a support and to the roof; other vining plants—such as Bougainvillea  and passiflora ‘Jeanette’—also reach for the ceiling. Imagine a koi pond with cape grape and pelican flower growing from the banks, and a tree-sized aloe plant growing right in the ground. All this, and more, inside a glass house!

There is an even larger greenhouse used for propagation where Colen and his crew start seeds, divide plants and root cuttings for the garden with enough extras to sell at the Fuller Garden’s annual plant sale in May.

Between the two greenhouses is a large display bed of dahlias. Since the tubers are not winter-hardy, they must be dug up and stored until spring. Colen pots them up in April to get them ready for planting out after all danger of frost has passed. “I was first impressed by a mass planting of dahlias I saw in Golden Gate Park in San Francisco,” he says. “They are a great plant to grow here since they have huge flowers with lots of variety, bloom all season long and are impervious to insect damage.”

Pop through a space in the hedge under an arbor covered with Boston ivy, cross the driveway and enter the Japanese Garden. On a hot summer’s day, this is the spot to cool off. There are quiet paths through shady areas and a charming bridge to cross. The stream burbles down a rocky waterfall into a small pool where bronze herons stand looking as if they are plotting how to catch one of the colorful giant koi. Hostas, azaleas, ferns, mountain laurel and rhododendrons thrive in the shade of towering Eastern red cedars. In spring, there are lots of bulbs and ephemeral wildflowers in bloom, and later a striking display of wisteria.

The gardens continue to evolve. In 2005, the back garden was redesigned around statuary given by the Fullers’ daughter Lydia Fuller Bottomley. The statuary features a marble figure of a woman kneeling to drink from a basin that flows into a reflecting pool. There are more rose beds, benches and an open lawn area.

Take some time this summer to stop by and smell the roses at Fuller Gardens. 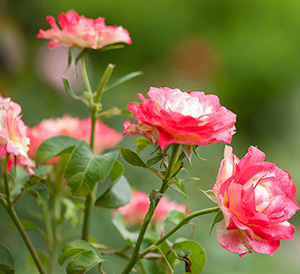 “Roses are high-energy plants,” says garden director Jamie Colen. “Nitrogen can be ‘locked up’ and not available to your plants if the pH balance is off, so be sure to get that all-important soil test done.”

Fuller Gardens’ 2014 season begins for the public on May 12.

Admission is $9, $7.50 for seniors, $6 for students and $4 for children younger than age twelve. Groups with more than ten visitors are admitted for $7 each. About 70 percent of the garden is wheelchair accessible.