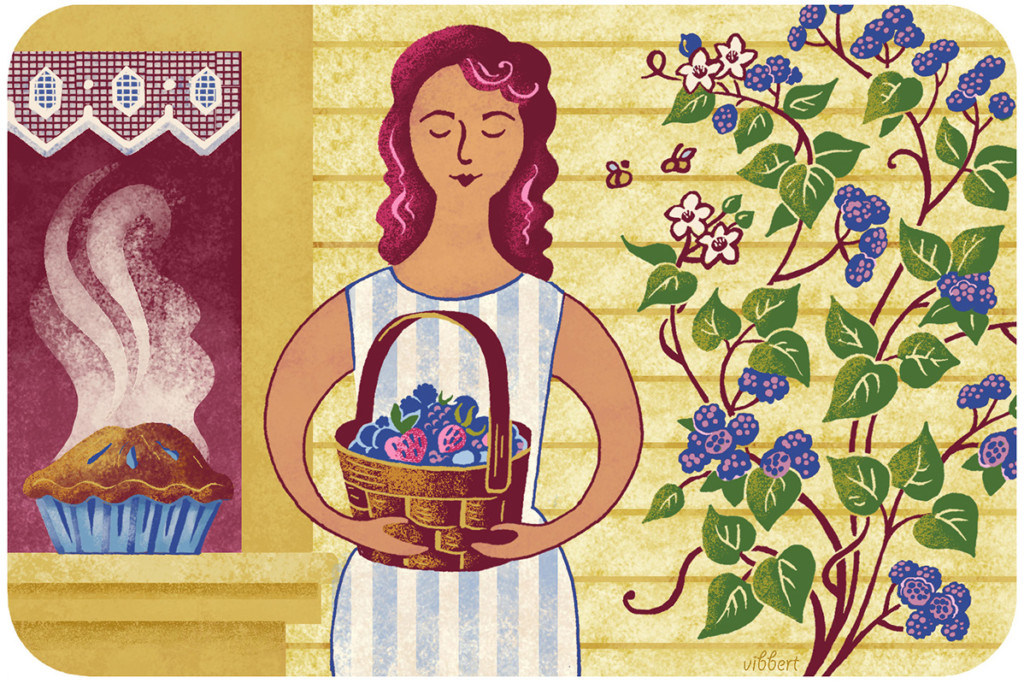 As a forager from a long line of foragers, nothing pleases me more than finding wild berries. I will scale a small mountain for low-bush blueberries that ripen in high summer just short of the peak. Sometimes abandoned roads pass a woodlot, clearcut years before, overrun by blackberries. Wear long sleeves and long pants. Don’t forget your bucket.

My daughter was grown before she realized “chuckaberries” were actually “checkerberries.” I’m an “r” dropper, from a long line of “r” droppers. Tasting of wintergreen and chalk, checkerberries appear just after snow melts, nested in small, dark leaves. Evidently, these berries live under the snow, so they are both the first and last of the edibles.

As a child, I learned which berries to avoid. A dark one on a tall, pale stem, “That’ll kill you,” Dad said. A blue-black cluster like a seed head looked tempting, but was not for eating. Baneberries—white with red stems—look poisonous. And are. Puckaberries, also called chokecherries, won’t make you sick, but they will make you pucker.

Among the first things my folks did when they bought their house in Boscawen in 1957 was plant raspberries. In my earliest memories, the bushes are laden and I’m reaching up. A ripe raspberry will, with the gentlest touch, fall into your hand.

When we bought our house in Northwood in 1978, I planted raspberries. What bliss to step out the back door and pick some for breakfast. Gradually the wild blackberries choked the raspberries out. Eventually, they too stopped producing, so I mowed them all down. Some years, I managed to grow strawberries, although something in our soil doesn’t like strawberries and the yield was meager, nibbled by snakes and chipmunks.

At Grampa Barker’s place, wild strawberries came where he threw ashes from his woodstove. I’d plunk myself down in the stubby grass and eat while the grownups visited. Tiny berries, no bigger than the tip of a toddler’s pinky, they stained my hands.

Grammie Stewart kept a diary, spare and to the point. How strange to find myself in those pages. August 1, 1965 —
Jean & Bud & children called, referring to my parents, my brother and me. Brought blueberry pie. Pie made from the berries we picked on the power lines in Salisbury. We weren’t the only ones. Often another car or two would be parked beside the road. You couldn’t see the other pickers, the bushes were too thick, but you could hear them moving, talking.

We measured our haul by the “bottoms full.” When the floor of the bucket is covered, that’s the first bottom full, with more to follow—one after another. What a disaster when a child trips, the bucket tips and the berries spill. It’s impossible to pick them all up once they’ve fallen. A scattering on the trail marks the loss.

Ma would stop at the first good bush and pick it clean. Dad explored, searching for the perfect bush. Once he found the ground all torn up. “Wild boar,” he said. I kept my eyeballs peeled and my ears open in case it came back.

Then came the year the electric company sprayed the power lines and killed all bushes. They never grew back.

Some say New Hampshire has two seasons, “winter” and “not winter.” But time can also be marked by the sequence of ripening—checkerberry followed by strawberry, raspberry, blueberry, blackberry, then checkerberry once again—the sweetest way to measure the passing of a year, of a life.