Historic preservationists aspired after authenticity when restoring author Mark Twain’s 1874 house in Connecticut. Production designers needed to replicate the interior of a Jazz Age nightclub in Atlantic City, New Jersey, for HBO’s Boardwalk Empire television series. Homeowner Carl-Johan Callin fancied something a la Frank Lloyd Wright for his Functionalist house outside Stockholm. They all turned to Bradbury & Bradbury Art Wallpapers, whose staff of eight prints designs from the 1860s to the 1960s by hand in its Victorian-era factory near San Francisco.

With amazing grace, these artisans wield awkward silk-screen frames and sloshing paint buckets in a well-rehearsed, rhythmic bit of choreography alongside paper-topped tables. They’re carrying on the pioneering work of Bruce Bradbury, who founded the print shop in 1979 in Benicia, California, to focus exclusively on museum-quality reproductions for a growing Victorian restoration market.

By the time Bradbury retired in 2005, his company was offering “the world’s largest selection of historical, coordinating wall and ceiling papers — over 600 pattern and color choices, from Anglo-Japanese to Neoclassical,” according to Old-House Interiors. 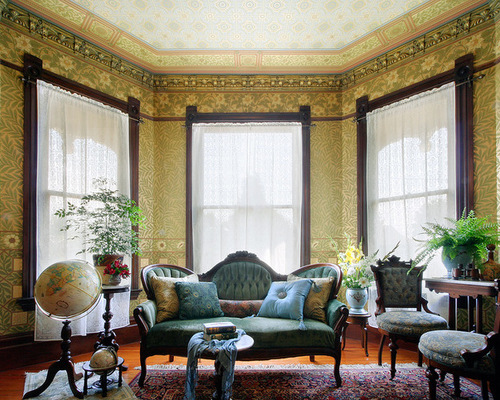 These coordinating papers, or room sets, simplify the reproduction of the tripartite walls and ornamented ceilings that were fashionable in the 19th century. The typical wall of the time had a frieze at the top, a dado (wainscot) at the bottom and a fill in between, with a border sometimes capping the dado at chair-rail height. The ceiling often consisted of a light-patterned field enclosed by a darker and densely patterned enrichment with coordinating blocks anchoring the corners.

Looking for a Temporary Fix? Try These Wall Decals

Room sets continue to be Bradbury & Bradbury’s claim to fame. “Big companies can’t produce the little details for coordinated patterns,” says Stephen Bauer, who signed on as a 19-year-old apprentice to Bradbury in 1982 and eventually took over the company with his wife, Lisa.

The Bauers have been keeping up with the times — sort of — by introducing collections of reproductions and reinterpretations of designs extending through the Art Deco period and into the mod era of AMC’s Mad Men.

“Our general line is to help homeowners find historically appropriate wallpaper for their homes,” says Stephen, who also notes an uptick in projects for restaurants and other public spaces. He’s dismayed by the wholesale gutting of period buildings. “I don’t know in the long run how much of a focus preservation will be,” he says.

Homeowner Callin ordered the collection’s Spheres Squared for a hallway in his late-1920s house outside Stockholm, along with Zenith, from the Art Deco collection, for the dining room. “I am a great fan of Art Deco, and while Googling for Art Deco wallpapers for the dining room, I got in contact with Bradbury & Bradbury. We saw Spheres at B&B’s homepage and fell in love,” he says.

Stephen, the company’s primary artist, adapted Spheres Squared from art glass windows Wright had designed for the Avery Coonley Playhouse in Riverside, Illinois. Wright wanted the windows of the kindergarten to appeal to children. The geometric shapes in primary colors are thought to have stemmed from Wright’s affection for parades, with their balloons, flags and confetti, and for the educational toys of his childhood known as Froebel Gifts. 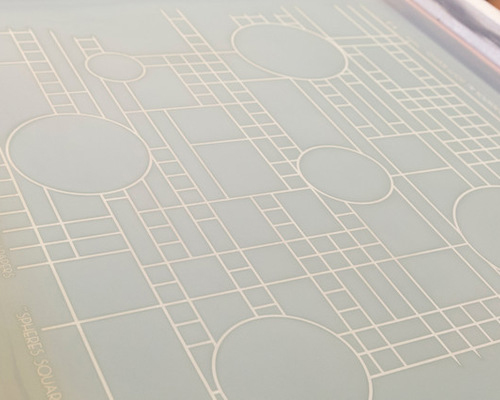 The Bradbury staff recently got to work on Callin’s order for Spheres Squared in its atmospheric 1884 factory. The two-story brick building with high arched windows used to be the machine shop of the Benicia Arsenal, the U.S. Army’s main West Coast ordnance facility from 1851 to 1964. After the arsenal was deactivated, the city bought and redeveloped the site as work and sales space for artists.

The company uses the silk-screen process, a kind of stenciling technique that goes back at least to the Song dynasty in China (960-1279). Although many of Bradbury’s stencils were cut by hand, today computers are used to create a film separation of each color of the artwork. Next, the screen is made — one per color separation. In former times, the screen material was silk, but Bradbury & Bradbury uses monofilament polyester stretched on a titanium frame. The screen is coated with a photosensitive emulsion, then sandwiched with the color separation in the frame and exposed to ultraviolet light. The exposed areas become impervious, while the other areas allow paint to pass through. The screen pictured above is the fifth and final one for printing Spheres Squared.

Before printing, veteran colorist Anne Kelly mixes each shade of the quick-drying oil-based poster paints by hand without any recipes. “She has a really good eye,” Stephen says.

A single roll, usually 5 yards long, typically costs $70 to $90. The company will do custom colors for an additional charge, but Stephen warns that the colors in each pattern are designed to work together and that swapping out one shade generally entails changing others for a successful result. “Sometimes clients come up with a colorway so good, we put it in our collection,” he says. 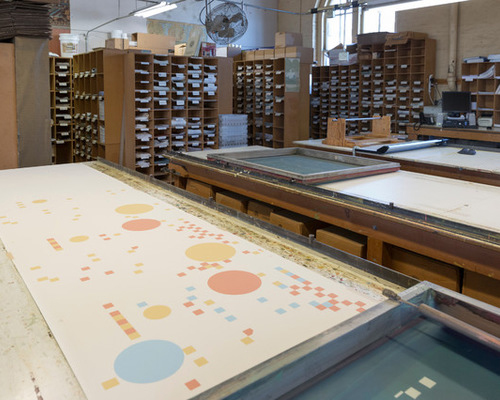 The paper is laid out on 92-foot-long tables, with each table holding the equivalent of six single rolls of wallpaper. This substrate is made of mostly cotton and wood fiber with just a touch of vinyl. Stephen likes it for its ability to stretch and bend — important when it comes to installation. Like most traditional hand-printed wallpapers, it comes untrimmed and unpasted.

This sample shows how the pattern begins to materialize as each of the first three colors is applied. But in practice, the colors are printed one at a time, usually from light to dark, all the way down the tables.

Lead printer Julian Valdez uses the rail along the table and the marks on the paper to carefully line up the screen in the proper place. Then he pours green paint, the fourth in the sequence, on the corresponding screen. 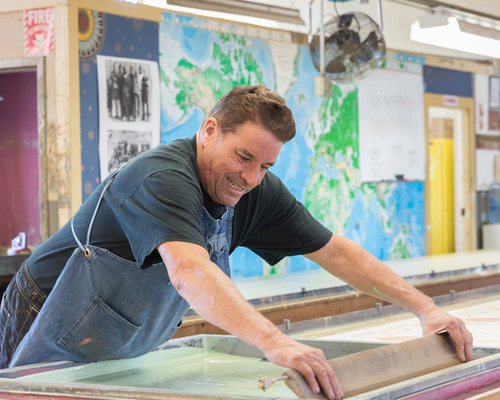 Next, Valdez draws the paint through the screen with a large plastic squeegee. This is where his experience comes in. “We have to find the right balance between how thin our ink is, the softness of our squeegee blade, and the pressure and angle at which we hold it. If we don’t get that right, then there are several different things that can go wrong,” production manager Burt Kallander says.

As Valdez continues down the table, he skips every other spot to give the previous color time to dry. 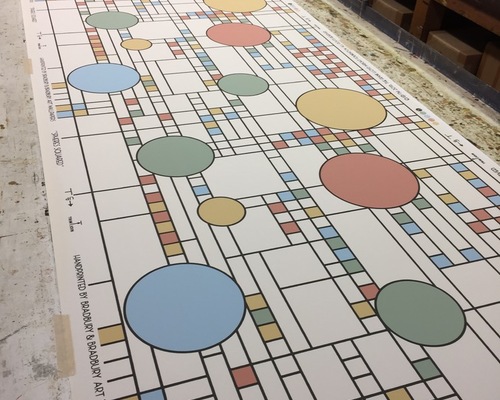 When printer and screen tech Jacob Toussaint prints the final color, black, the design of Spheres Squared leaps to life. The crispness of the lines and clarity of the colors seem to defy reason. These qualities attracted fine artists like Andy Warhol and Roy Lichtenstein to the medium, also called serigraphy, in the 1960s.

“With silk-screening printing, you get a really nice, even, lustrous color,” Stephen says. “It allows you to hold more detail.” 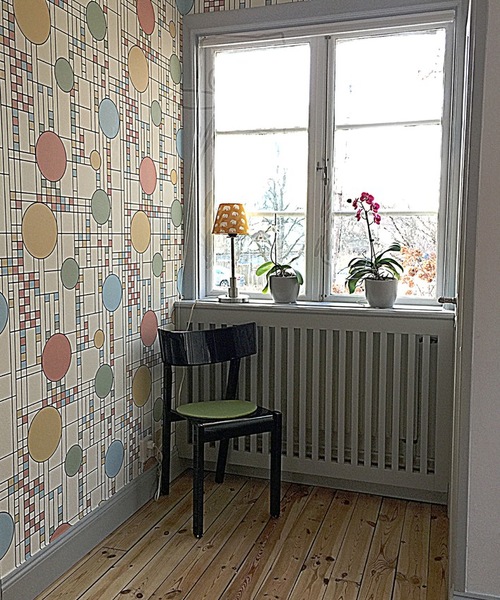 Here is the Spheres Squared wallpaper in the hallway of the home of Callin and his wife, Malin Frank. They’re happy with the way their hall and dining room turned out.