The Barrett House is a turn-of-the-century treasure

The Barrett House estate brought city elegance to a country setting in the 1800s. 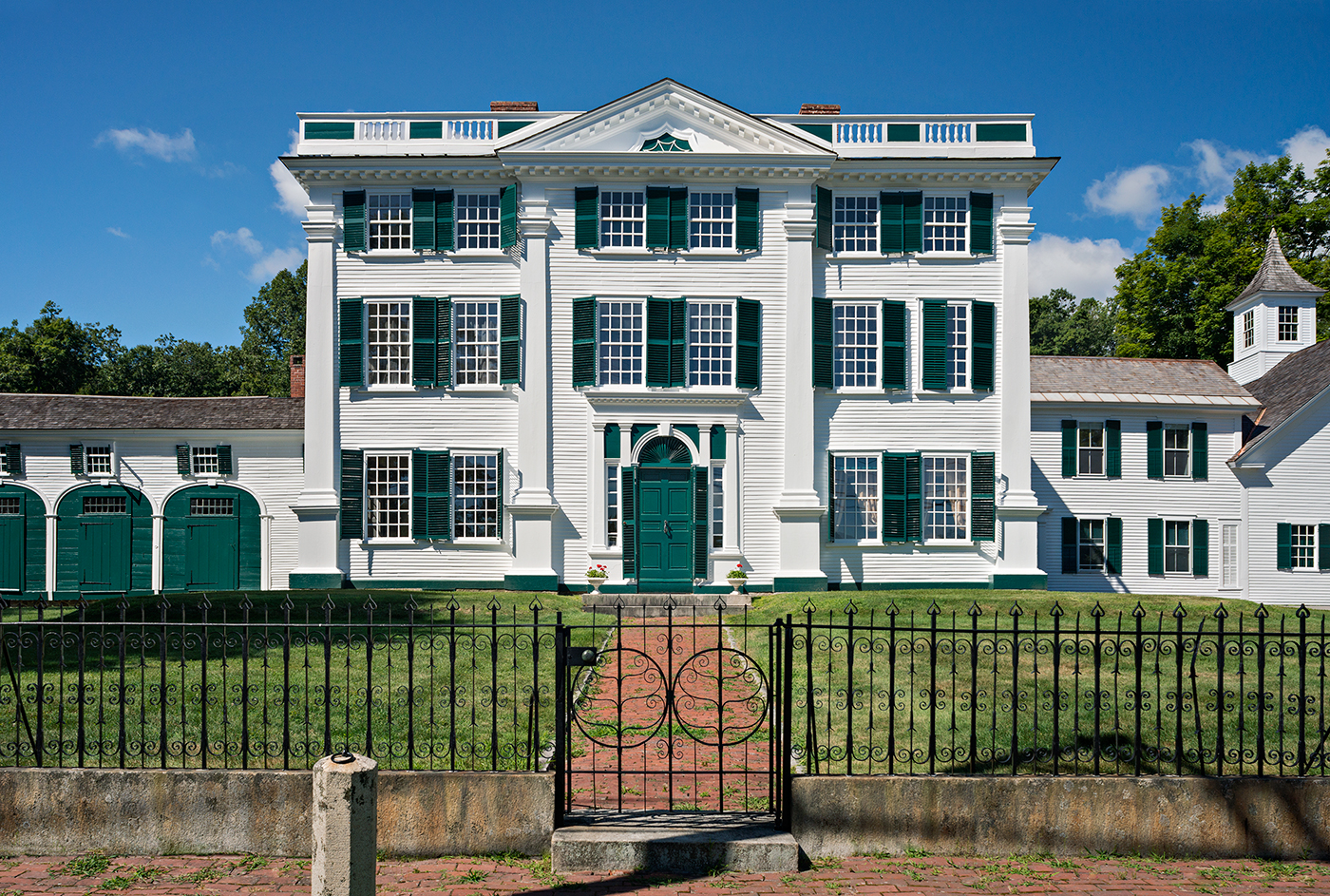 The Barrett House’s turn-of-the-century Federalist-style architecture and furnishings transport visitors to the time when John Adams was U.S. president and ancient Greece inspired everything from women’s clothing to art.

Set in New Ipswich on a seventy-acre estate, which includes a Gothic revival gazebo, the country mansion was built in 1800 by Charles Barrett Sr. for his son, Charles Jr., and daughter-in-law Martha Minot as a wedding present. According to tradition, Martha’s father, Jonas Minot, declared he would furnish as “fine and elegant a house” as the father of the groom could build, according to Historic New England, which owns the home today. And elegant the home was—and still is. It was the largest in town at the time—the three-story, 5,300-plus-square-foot mansion included a ballroom on the third floor.

New Ipswich was a bustling mill village with a booming local economy when Charles Jr. and Martha lived at the home, raising their five children. The couple maintained an elegant lifestyle—entertaining guests at parties in the ballroom, and surrounding themselves with fine furniture and décor. The family lived in the home until after Charles Jr. died in 1836 and Martha in 1842. Barrett House remained a family home for their second eldest son, Charles III, before he moved to Cambridge, Massachusetts, to pursue a successful career as a book dealer.

Barrett siblings resided in the home until around 1916, when the house and its contents were left to George Robert Barrett’s stepdaughter, Caroline Barr Wade, who never made the mansion her home. In 1948, she donated the Barrett House with a generous endowment to Historic New England (then known as the Society for the Preservation of New England Antiquities) as a memorial to the family. The organization undertook a major restoration project and, in 1950, opened the home as a museum. 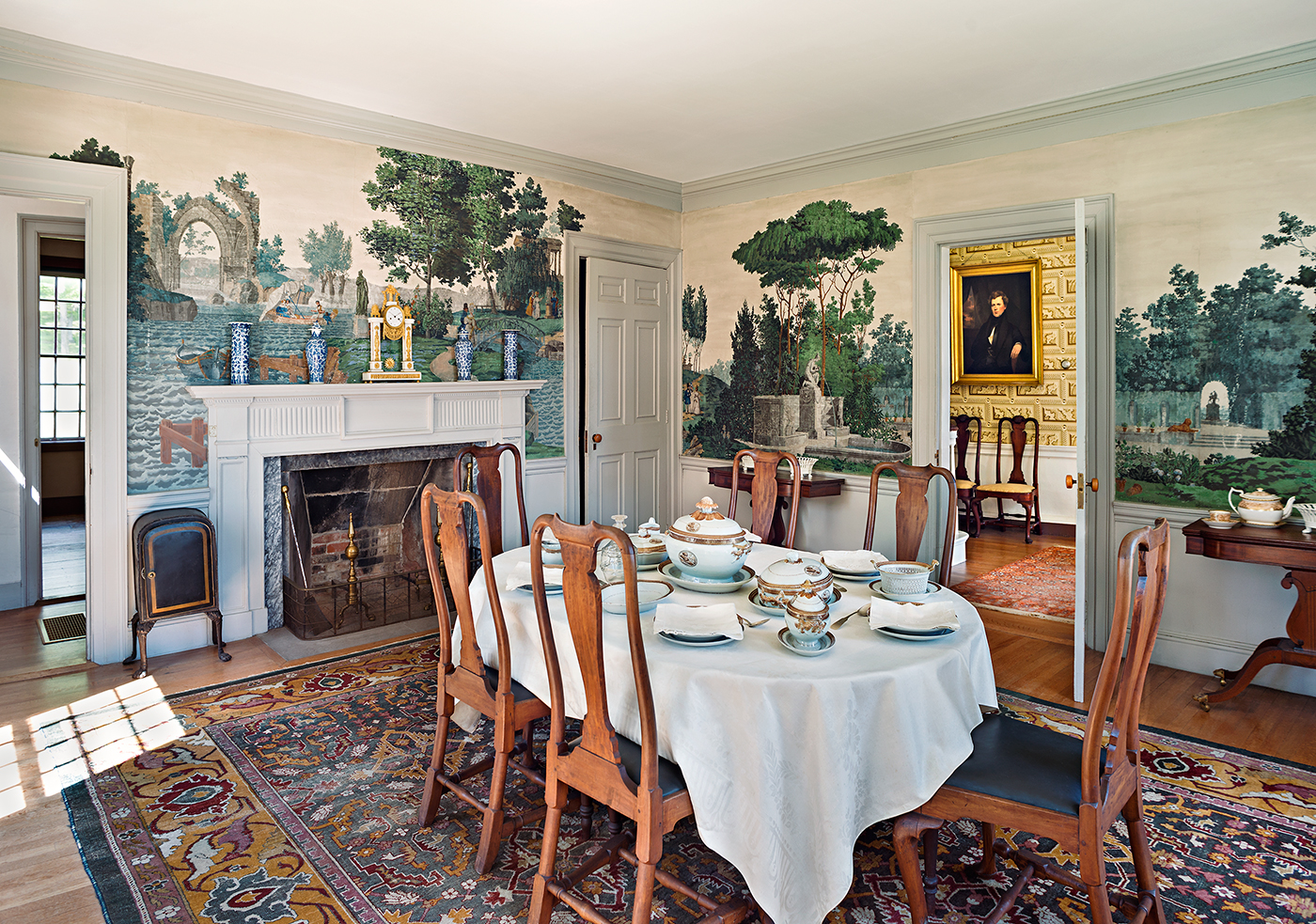 The reproduction French mural wallpaper adds color to the dining room. Furnishings at the mansion include pieces owned by the Barrett family.

Grandeur in the country

Linda Marshall of Historic New England says the mansion is a stunning example of Federalist-style architecture characterized by the centrally situated front doorway and symmetrical features, such as the matching front exterior columns and the equal number of windows on each side of the entranceway. Among the features that stand out are the size, scale and restored condition of the home.

“In my mind, what sets the Barrett House apart is when you’re there, its like going back in a time capsule,” Marshall says. When the home was first built, New Ipswich was still largely agricultural with farms and modestly sized homes. So when the three-story, mansion went up, the community must have taken notice. “I could only imagine it was quite something for the time,” she says.

At one point, the third-floor ballroom was divided in two spaces but has since been restored to its original condition. “The ballroom is one of my favorite spaces,” Marshall says. From ballroom windows, one can see the rural countryside for miles.

The estate, which is also known as Forest Hall, was chosen as one of the filming locations for the motion picture based on the Henry James novel, The Europeans, in 1979. Today, the home features French reproduction mural wallpaper, true in design to the time period, and a mixture of original furnishings from the Barrett family and pieces provided by Historic New England.

The mansion’s exterior was recently repainted. In 2011, Historic New England was awarded a grant from the Land and Community Heritage Investment Program to support a site drainage repair project.

“A lot of attention has been paid to the exterior,” Marshall says. “Any kind of historic house requires constant attention to maintenance.” She points out the work done to address drainage issues; paint and roof repairs have resulted in the estate being in good shape.

And the public is invited to see for themselves. The property, located at 79 Main Street in New Ipswich, is open for tours from June to October on the second and fourth Saturdays of the month. 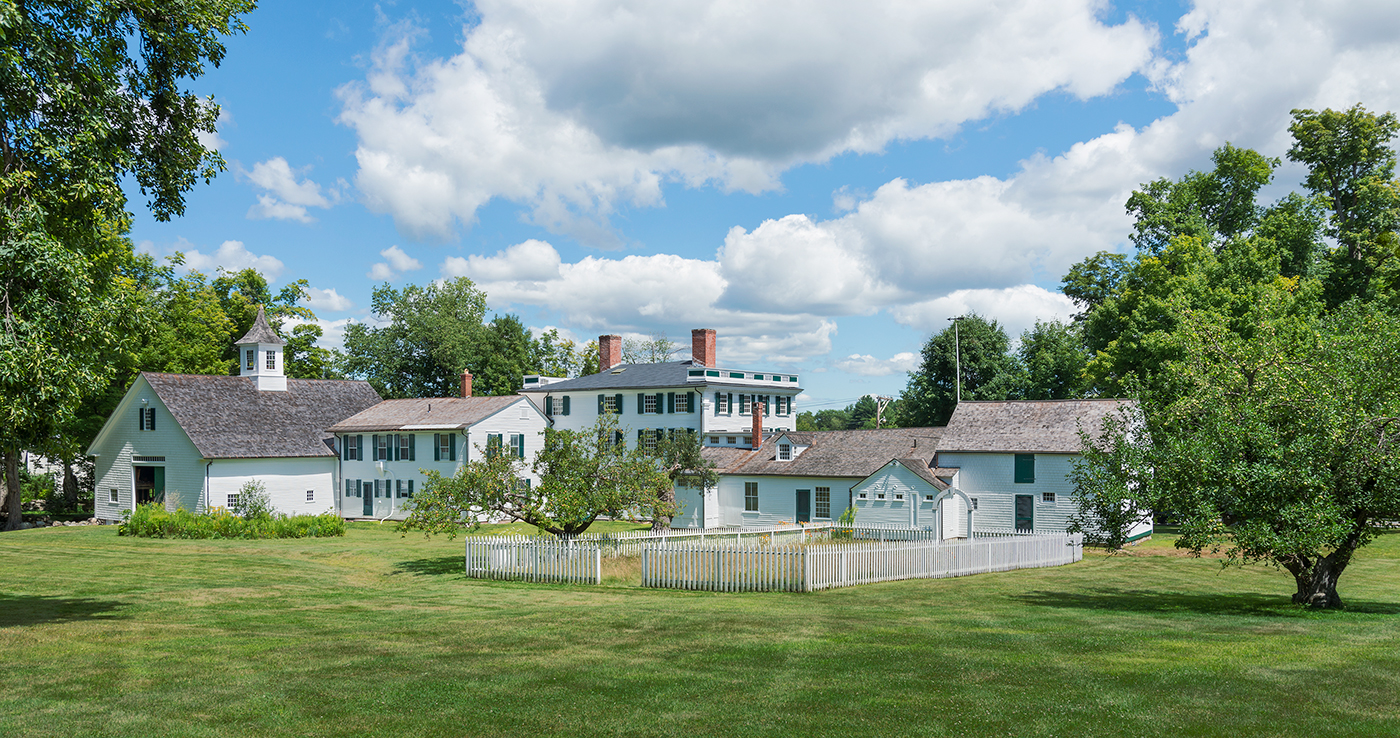 The Barrett House estate includes gardens, barns and, tucked among the trees behind the house, a Gothic Revival summerhouse.

Homeowners with dwellings of nearly any age are likely to find tips, solutions and strategies at this year’s New Hampshire Old House and Barn Expo coming to the Radisson/Center of New Hampshire in Manchester in March.

Sponsored by the Concord-based New Hampshire Preservation Alliance, the expo is scheduled from 9 a.m. to 5 p.m. on Saturday and Sunday, March 12–13, 2016 and includes two full days of educational sessions, traditional arts demonstrations, discussions with preservation contractors, and more than sixty exhibitors of preservation products and services.

Jennifer Goodman, executive director of the New Hampshire Preservation Alliance, says the expo offers something for owners of buildings dating from 1750s to the 1950s, do-it-yourselfers and history buffs. “The expo is a welcoming event,” Goodman says. “It helps educate and inspire.”

The one-stop-shopping trade show aims to provide old house and barn owners and enthusiasts with appropriate and affordable solutions. Visitors can create their own show itineraries by exploring garden, architecture, history and preservation strategies with free hourly lectures.

Admission is $10 for adults, and $7 for seniors and students.

The New Hampshire Preservation Alliance is dedicated to the preservation of historic buildings, communities and landscapes through leadership, education and advocacy. For more information, call (603) 224-2281 or visit www.nhpreservation.org. The proceeds help support the alliance’s year-round educational programming.