Renovating his- and- hers master bathrooms was one of the last projects a Bedford couple undertook.

The dramatic appeal of the “his” master bath plays on rich, earth-toned tiles, mahogany wood trim and cabinetry; a soft palette of grays for walls and ceiling; and one outstanding ochre wall.

When Randy and Karen Shaw purchased their house on its large compound in Bedford, they tackled its restoration and updating with enthusiasm and respect for the style of the home. In 2015, their home and the team that made it happen was highlighted in a New Hampshire Home feature, Updating a Classic ’80’s Home.

However, near the end of the Shaws’ punch list were two, large his-and-hers master bathrooms that incorporated closet and dressing areas. With outdated fixtures, colors and cabinetry, the bathrooms looked worn out.

“We never thought we’d have such big bathrooms, but there they were,” Karen says.

Karen enlisted the help of her trusted muse, interior designer Cynthia Shreve of Cynthia Shreve Interiors in Derry. “Cynthia knows how I think,” Karen says. “Randy and I had some ideas about the bathrooms. Then, Cynthia took our ideas and went three steps above what we imagined.”

After some discussion, the design goals were to create a feminine look for Karen and a masculine look for Randy. The plan would use the existing features the couple liked while keeping plumbing and lighting changes to a minimum.

In Karen’s bath, a “wet” room that incorporates both the shower and bathtub replaced the old soaking tub and small, dark shower. A floor-to-ceiling glass wall created a light, airy space while a river rock “path” in soft green and natural shades of brown connected the room visually. Now, it feels like a spa.

Shreve and Karen decided to keep the existing mirrored wall that is framed in mahogany trim, a design feature used throughout the house. The sink vanity remained in the center of the room, but a new, larger vanity was designed, built and painted white. As well, new cabinet doors were built and embellished with a motif common to all the custom doors in the house. 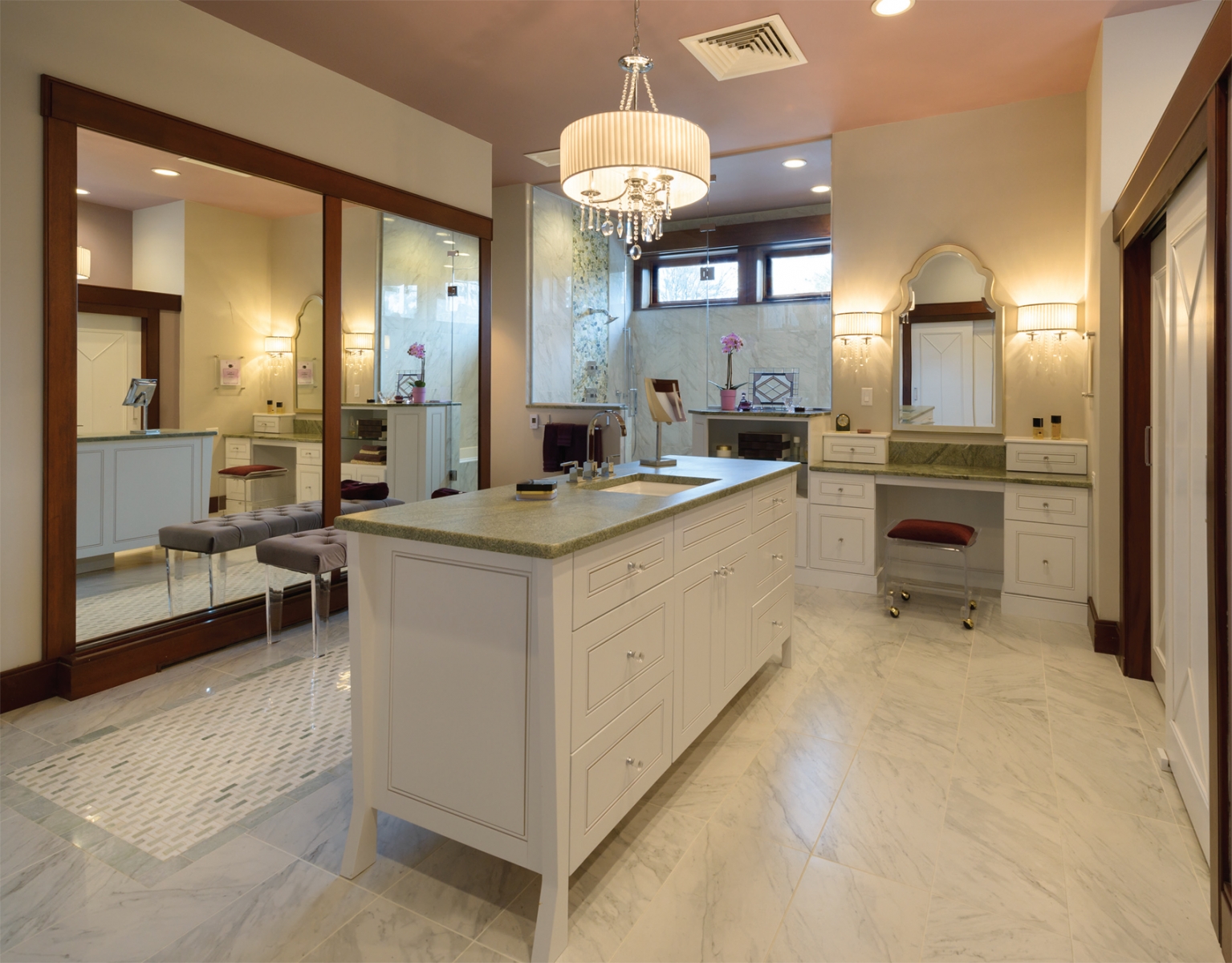 The softness of the “hers” master bath is a visual tour de force from the mosaic rug to the creamy whites of the tile and woodwork, to the lavender ceiling. A chandelier and two wall sconces add sparkle.

Denis Lamy, of Bristol Construction in Bedford, who worked on the house previously, was again called on to build the custom cabinetry. “It’s always a pleasure to work with Denis,” Shreve says. “We work well together, anticipating not only functional needs, but style goals as well.”

For a luxurious, easy care “Carrera marble” look, 3D-printed porcelain tile was used for the main part of the floor and shower. “Those tiles are a relatively new product that have become very popular,” says Herb Goedecke, president of Goedecke Decorating Center in Bedford. “Porcelain tile is a lot more resistant to staining than marble. Plus, the tile conducts heat beautifully, and both bathrooms have radiant-floor heating.” 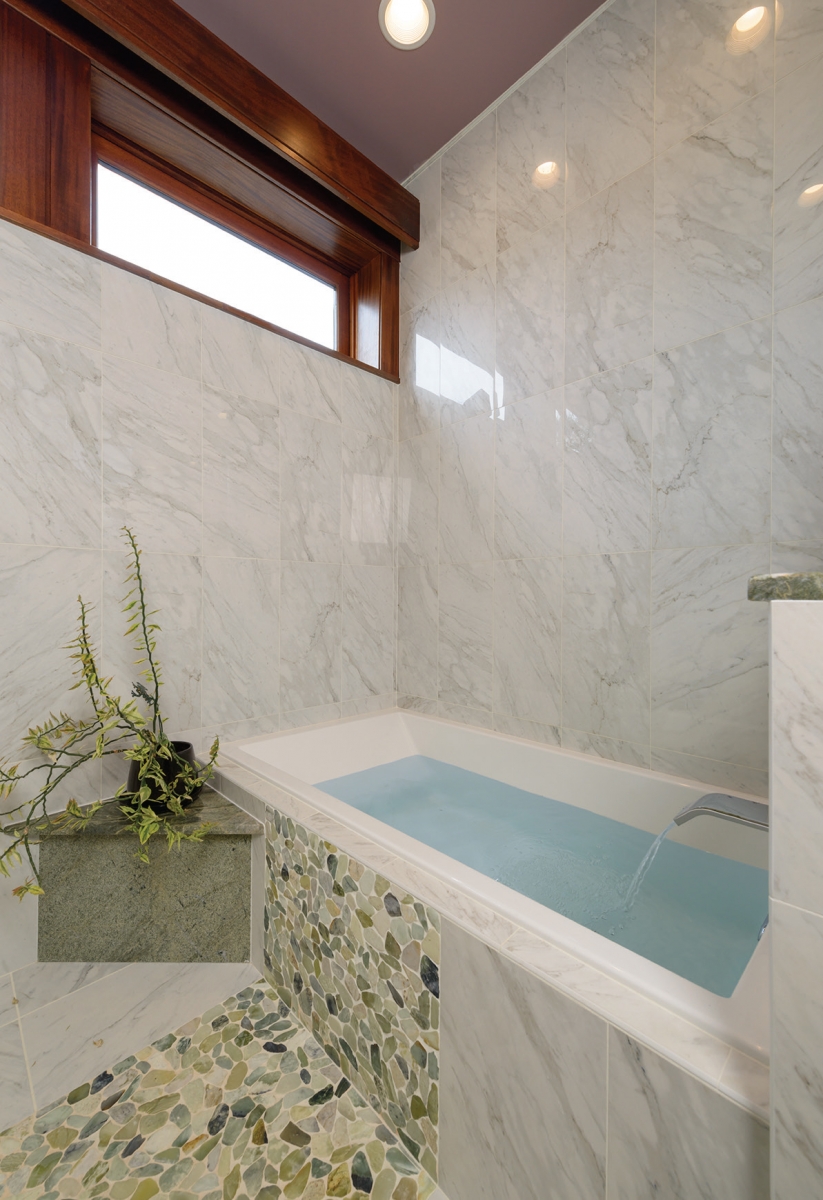 A river rock “path” links the shower and tub in the “hers” master bath, while adding an organic, textual element.

In addition, a Ming green marble floor mosaic was installed. A chandelier as well as two fabric and crystal wall sconces added feminine touches. To keep the look soft, the ceiling was painted lavender.

For Randy’s bath, the team used the mahogany trim and cabinetry in keeping with the rest of the home. And again, the team used 3D-printed porcelain tile. The Goedecke team skillfully installed the earth-colored tile in a variety of sizes and color variations for both the floor and the shower.

“A professional installer is really worth it,” Shreve says. “They know how to lay out the best pattern for the room. A novice installer can end up with the room’s tile going from light to dark or with ‘random’ manufactured patterns matched up rather than creating a pleasing composition.”

Although the existing layout of the room remained the same, key changes were made to reflect current trends and new products. A wall that made the large shower feel like a cave was removed. It was replaced with glass for more light and exposure to the tile detail work. Multiple showerheads were added to offer showering options.

A major addition to the bathroom was a sauna that replaced the tub area. Once the tub and surround were removed, Randy realized there was unutilized space. Randy, who acted as project manager on the job, decided to build a six-person sauna in its place. The transformation was consistent with the home’s wood décor and intent—in other words, let’s relax!

The focal point of the room is a wall-hung mahogany vanity with wall-mounted faucets flanked by cabinets that rise to the ceiling. A band of lights seemingly floats in front of a mirror, which also goes up to the ceiling. A Caesarstone counter and Kohler sink in coordinating warm gray tones give the room a sleek, masculine look, and the adjacent redorange accent wall added a needed pop of color.

Shreve opted to paint the ceiling in this bathroom a soft gray to visually bring it down a bit. “When you have this kind of space, you really have to stretch yourself to come up with something fresh and great,” Shreve says. “This house was a joy to work with and so were the clients.”

“We love both rooms,” Karen says. “And, I was surprised that it really makes sense to combine a bathroom with a dressing room.” 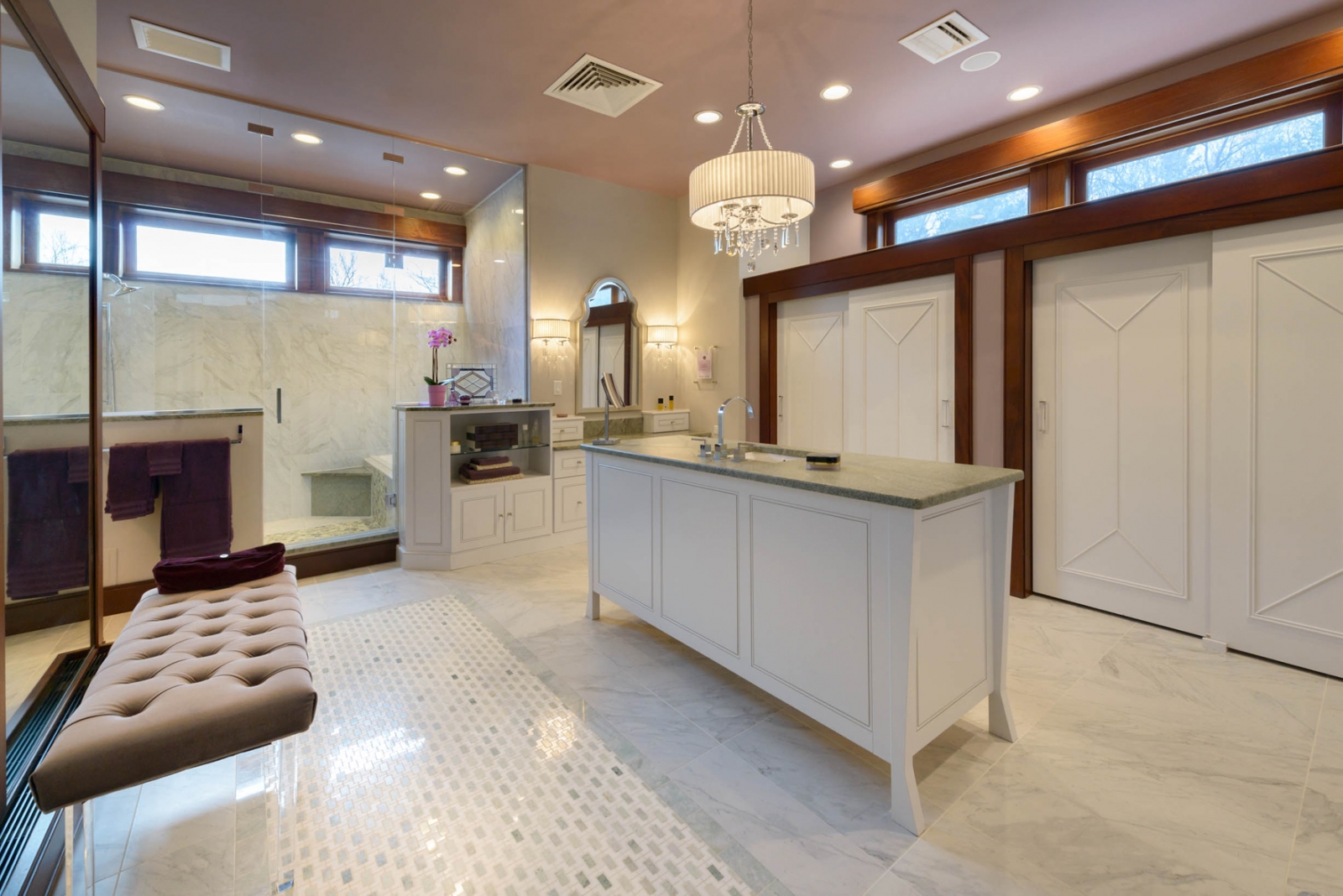 Custom cabinetry adds subtle refinement to the two vanities and closet doors in the “hers” master bath. The look is coordinated and tailored. 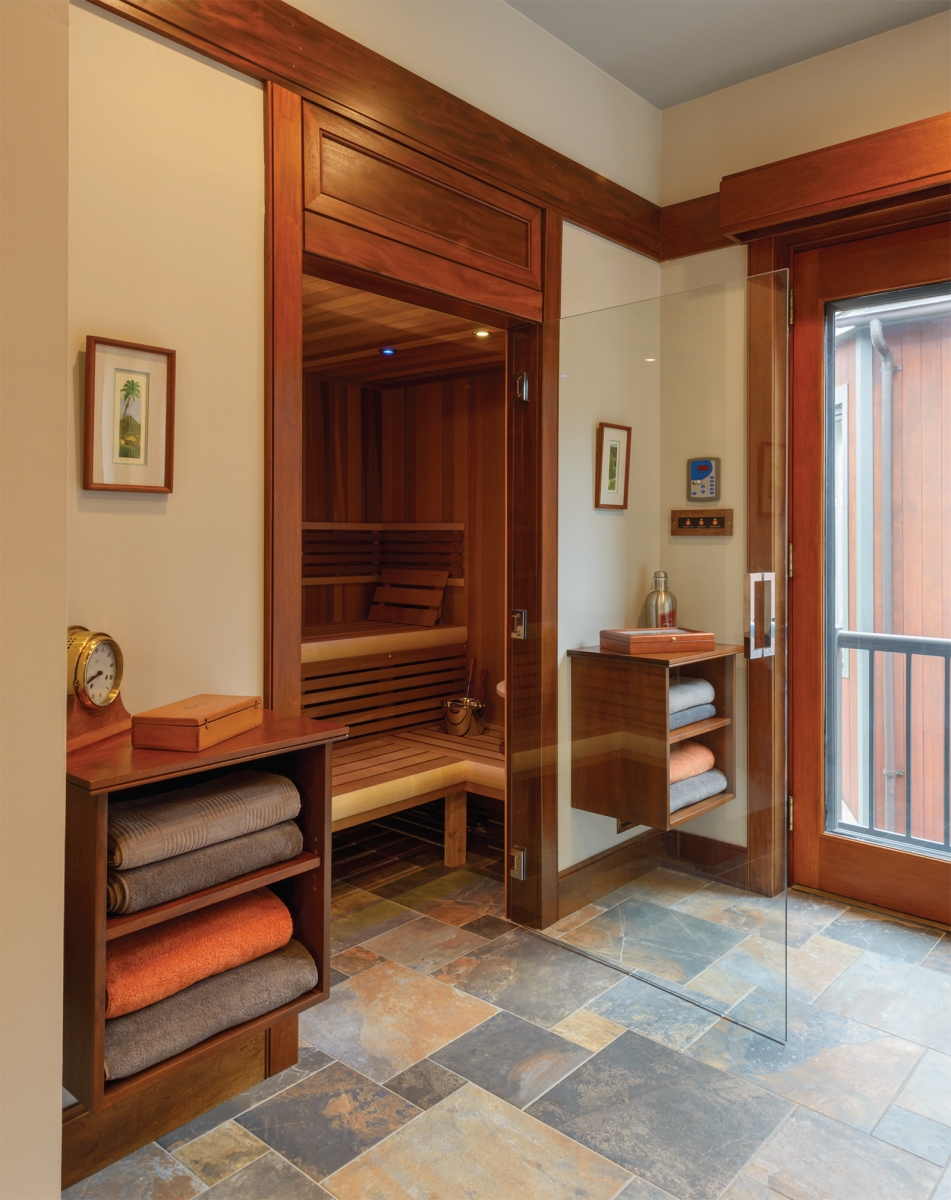 The sauna in the “his” master bath fits perfectly in this home with its rich mahogany trim. Floating cabinetry and varied, richly hued towels make for a relaxed feel. 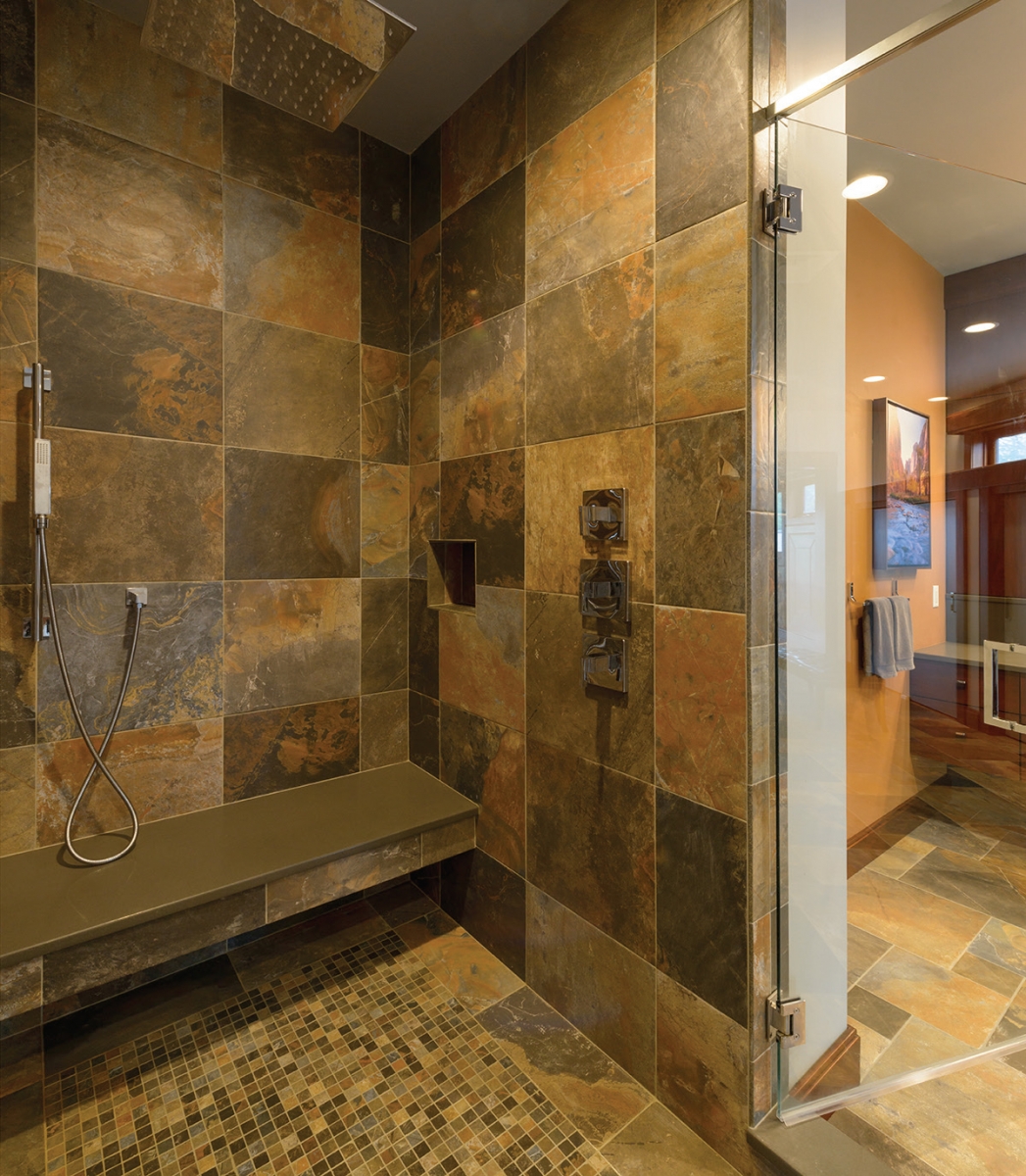 The solid gray shower bench complements the mosaic of other earth-colored tiles in the “his” shower. Line drains in both master bath showers present a seamless look.
Categories: Architecture and Interiors, Bathroom Designs, Renovation, Renovation & Restoration