The Guru of Timber Framing 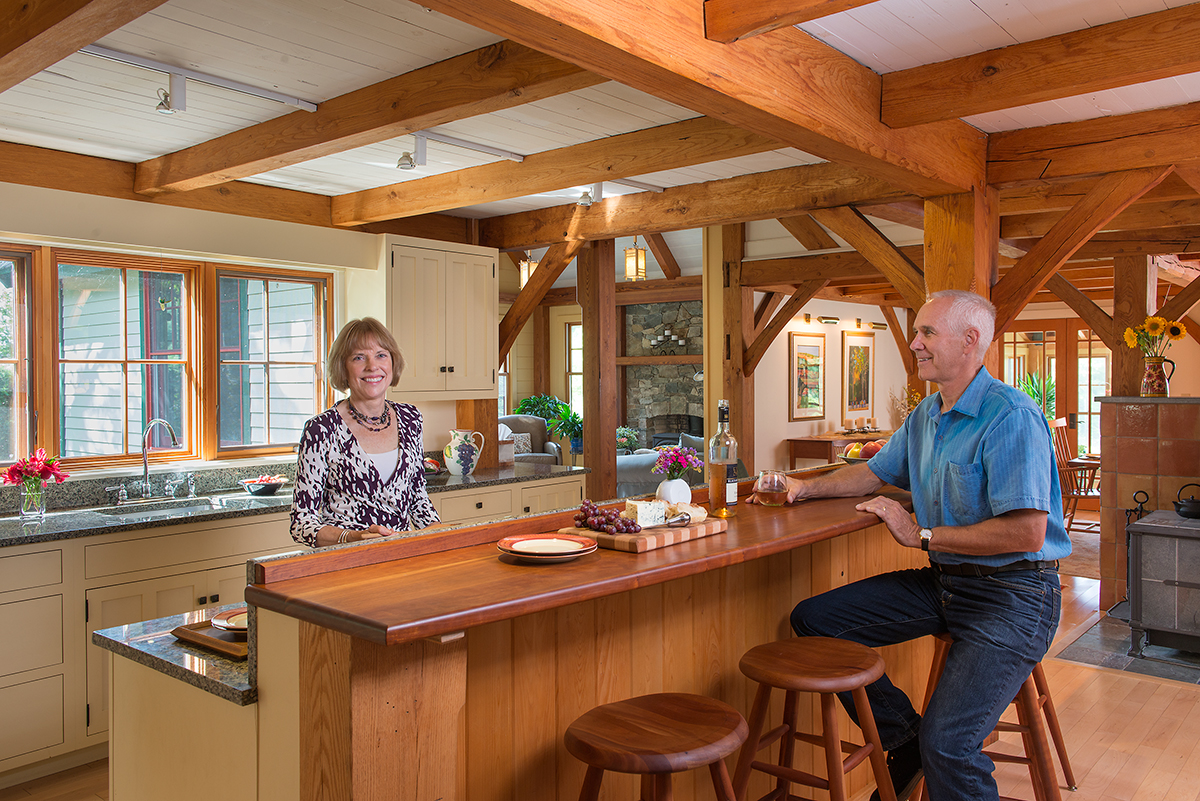 Christine and Tedd Benson’s sunny kitchen also showcases Tedd’s woodworking talent. He built the kitchen island out of cherry. The bar stools are by ClearLake Furniture in Ludlow, Vermont, and the cabinets are by Crown Point Cabinetry in Claremont.

Although he has been building homes for more than forty  years, Tedd Benson is still humbled by his craft. Constructing a well-designed home is a near-religious experience for Benson, who helped revive the one-thousand- year-old craft of timber-frame construction—giant wooden posts and beams that are secured with joints, wooden pegs and braces. His timber-frame homes are energy-efficient works of art, with soaring open spaces framed by majestic wooden walls and beams.

Benson, founder and owner of the Walpole-based Bensonwood, appreciates good craftsmanship—any work, really, that’s accomplished by hand. “There’s something about approaching a job as a craft, whether it’s home-building, pottery, sewing or anything else,” Benson says. “You want to make it perfect and get it right. There’s a certain amount of humility because it’s an endless path, not a destination.”

An appreciation for simplicity 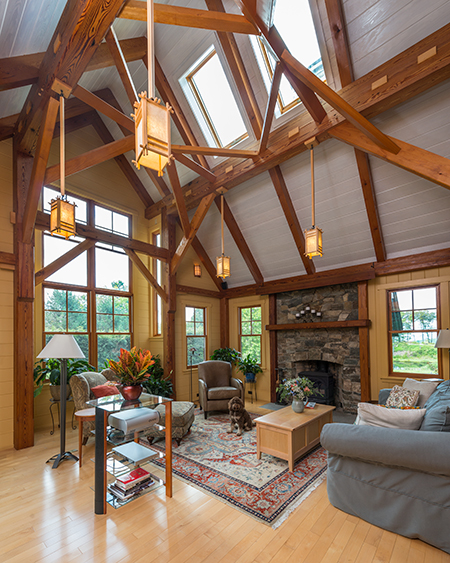 Unique when constructed in the late 1970s, the great room’s soaring “timber frame within a timber frame” design gives the room a more human scale. The beams are made of salvaged Southern yellow pine. The Japanese-style hanging lights are by Cherry Tree Design in Bozeman, Montana.

Benson was enamored with carpentry and building when he moved to New England from Colorado as a young adult. Studying the timber-frame barns and Colonial homes he found across New England, he was interested in the methodology behind timber framing but also wanted to improve the quality of home construction. The simplicity and beauty of timber-frame construction became the foundation of his growing business, as he learned to combine his craft with contemporary building needs, such as high-performance insulation and modern mechanical systems.

Benson’s burgeoning passion became the foundation of his company Bensonwood, which now employs more than sixty employees. Bensonwood has developed a national reputation, not only for its artfully designed timber-frame structures, but also as an innovative builder of hybrid and energy-efficient homes and commercial buildings; the company also designs and builds prefabricated homes through its sister company, Unity Homes located in Unity and founded in 2012. But homebuilding isn’t the only thing that keeps Benson busy—he’s also published three books on timber framing (Building the Timber Frame House; The Timber Frame Home; and Timberframe: The Art and Craft of the Post-and-Beam Home) and helped establish the Timber Guild of North America.

At home with the Bensons

Benson put his ideas into practice when he built his own 2,800-square-foot home in Center Alstead, which he shares with his wife, Christine. “I wasn’t interested in making a statement,” Benson says. “It’s a simple home that reflects good craftsmanship and energy efficiency.”

Benson’s home is the result of several additions. The core of the home—a thirty-foot-by-thirty-six-foot area that includes three bedrooms, two bathrooms, the kitchen/dining area and a family room—was built in 1979. In 2002, an addition added a new entry, pantry, expanded family room, four-season porch and guest bathroom.

“I didn’t have enough money to finish the house when we first started building,” Benson says.

Although he claims it never received the same level of attention as other projects by his company, his home became a prototype to test new building materials and design techniques. One of the first experiments was developing structural insulated panels (SIPs) to provide a blanket of insulation over the home. The SIPs were wrapped over the timber frame, providing high energy efficiency for the time. “We didn’t have a heating system other than a wood stove,” Benson says. “If we left town for a month, we didn’t have to drain the plumbing—because the house was so well insulated, the pipes didn’t freeze.”

Some ideas didn’t work out, such as using only planking over the timber floor joists to keep costs down. “It was too loud,” Benson says. “We had to add carpet pads.”

The family room, renovated in 2002, was one of Benson’s first attempts at fabricating walls, a floor and a roof off-site. It was such a successful building method, the company started fabricating all homes off-site in Walpole; Bensonwood homes are installed on-site and are usually constructed in three days.

Benson’s home is a showcase for different types of natural wood (he saved money on the original structure by using timber beams that were structurally fine but didn’t necessarily meet customers’ aesthetic standards). The home’s open-concept family room was a radical idea in the late 1970s. Its unique “timber frame within a timber frame” design brings the lofty space down to a more human scale. The room was built with salvaged Southern yellow pine, a wood often found in old mills along the East Coast (before there were steel I-beams used for structural support, there was Southern yellow pine, Benson says), and Port Orford cedar (a strong, light-colored wood that was used in the four-season porch). The rooms in the original section of the home were built with mostly red and white oak.

Maple floors with radiant heat help keep the ground level of the home warm. The dining room—with its Thomas Moser accent table and rocking chair, both made of cherry—features a trestle table, built by Benson of high-grade fir. Benson also constructed the kitchen island from cherry.

Wood stoves are still the primary heat sources for the home: one located in the middle of the house in the kitchen; the other is outside and heats the hot water. The three-story home is designed to take advantage of the rising heat from the indoor stove to keep the upper floors comfortable (Karl, the Bensons’ grandson, appreciates the open-concept design for another reason: launching toy parachutes from the second and third floors).

Outside, dormers and gables give the home an Arts and Crafts-style sensibility. The Shingle-Style clapboards are made of weather-resistant fiber cement, a highly durable product that holds paint better than wood and reduces the need to re-paint.

The home’s landscaping—designed by Chuck Simpson of Simpson Landscape Co. of Dublin and maintained by Patrice Boerum of Alstead—gives the property a natural, organic feel. Trees, a stone patio and an arbor screen the house from a Bensonwood workshop adjacent to the property. The spectacular view over the garden looks west toward Vermont and the Connecticut River.

The Bensons’ home and its gardens are natural reflections of the homeowners. “I have a high standard for work that’s accomplished by my hand, especially my own home,” Benson says. “The way it was designed and built, I hope it’s a home that’ll be here for a few hundred years.” 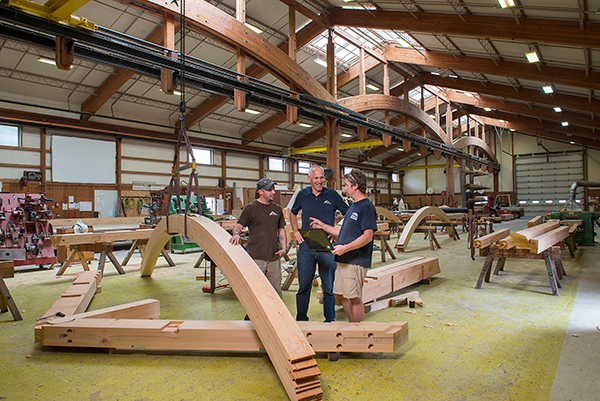 Bensonwood timber-frame homes are fabricated in the company’s Walpole facility, then assembled on-site, enabling timbers to be cut and shaped in controlled conditions rather than at a job site. Shown here are Tedd Benson (center) and two employees discussing a project.
Categories: Notable Homes & Homeowners