Renovating the kitchen, family room and upstairs baths made a world of difference for a Bedford family. 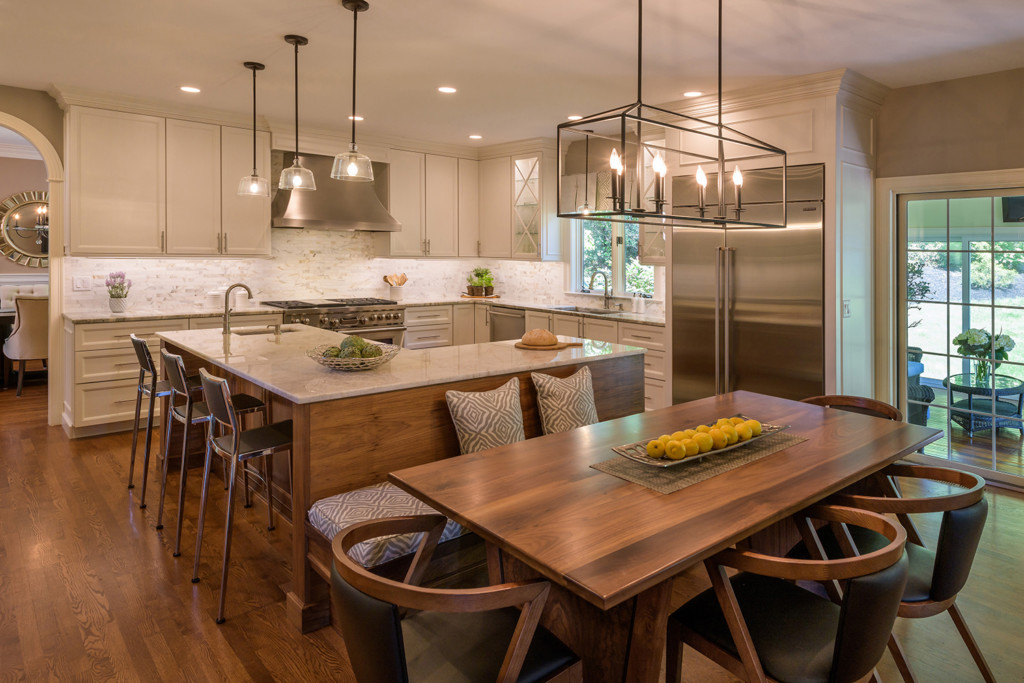 When the Girasole family returns home after a busy day, this calm, lovely kitchen provides a wonderful place
to gather.

Jen and Chris Girasole began their renovation journey when Jen met Denis Lamy during a kitchen tour in Bedford. Before long, Lamy, an employee of Bristol Construction, LLC in Bedford, was working on the upstairs master bath. It was a cavernous space and he said to Jen: “You’ve got to meet Cynthia Shreve. We’ve worked together for more than a decade. She’s a great interior designer.”

Soon Shreve, Lamy and Tim Bristol, owner of Bristol Construction, were hashing out designs around a table. Jen, who’d been planning the renovation for a while, knew what she wanted. She had made scrapbooks of ideas and photos collected from magazines online sites, such as Houzz and Pinterest. But photos will only take you so far.

“Send me all your ideas,” Shreve said.

Then, they were at the table again— drinking more coffee, and having a muffin, or two thanks to Jen. Shreve sketched out ideas on the spot and then drew up drawings to scale.

“She was really good at space design and planning,” Jen says.

The result was the desired two bathrooms on the second floor—one for general use, and a private bath for the Girasole’s oldest daughter. To make room for those two baths, the laundry center moved to the master bath and was neatly installed in a large closet. There was still plenty of room.

To achieve that, though, the existing master bath needed work. A Jacuzzi tub dominated the main space along with an open Roman shower. A lion’s bust surveyed the scene, and the color scheme was tan and orange.

Shreve quickly saw how the space could be maximized and transformed. The team and Jen got on board, and the design got even better.

Jen knew the colors she loved—warm whites, soft greens, and the gray and brown tones of marble. With Shreve’s input, the ceiling became a darker green in contrast to the lighter green walls. “She did that to bring the ceiling down a bit,” Jen says.

Shreve and Jen mapped out a glassed-in shower, a wall-to-wall double vanity, a makeup vanity and an old-fashioned, freestanding tub. Jen opted for porcelain Carrera tile for the flooring but decided on marble for the countertops. She understood that marble has many drawbacks—it chips, stains and soaks up perfume. But, as she noted, “a bath is not a kitchen.”

The tile rug in the center of the room adds a cozy textural feel to the room. Goedecke Flooring & Design in Bedford installed the tile. The sheer curtain fabrics provide a soft touch, but color, light and crystal create the overall feel.

Bristol Construction made the custom cabinetry, contributing that handcrafted look from the turned legs on the makeup vanity, to the shower’s paneled knee wall, to the double-sink vanity.

About a year later, their next project was the Girasoles’ dressing room. Once again, the team sat down to discuss the project. Jen opted for the same understated colors, and Shreve suggested creating low, open closets to make efficient use of the space. Then Bristol Woodworking built the center island, shelves and closets to coordinate with the master bath.

Moving on to the family room

That winter, the roof over the family room sprang a leak, so the Bristol Construction team came in and fixed the problem. Since the room was torn up, Chris and Jen decided to redo the family room and the kitchen. As sometimes happens, just as the design and construction team thought they could get to work, they discovered that a structural beam would have to be installed to open up the space.

Bristol analyzed the task, and enlisted twelve men to lift and install a twenty-four-foot steel beam. “It took a lot of effort to plan and stage that installation,” Bristol says. “The beam extends from the far corner by the sink to the refrigerator. It’s not something you can see, but it counts.” 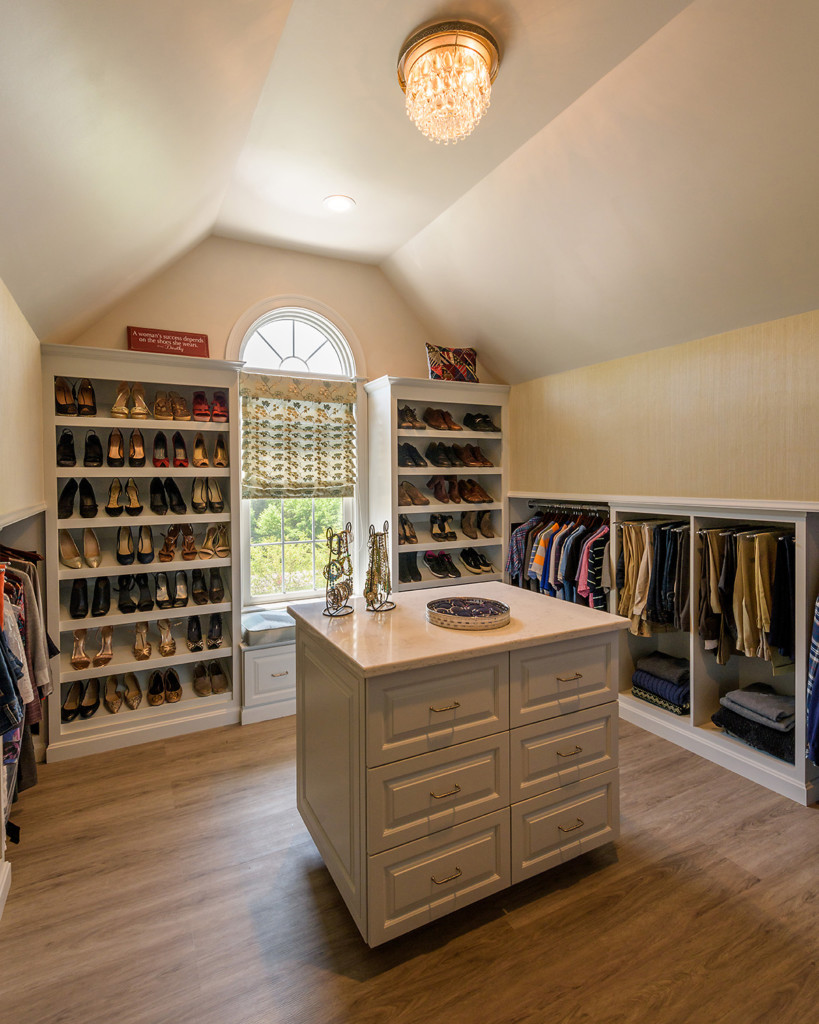 Custom woodworking for the center island of the master closet creates a distinctive look.

With these two clean, rectangular rooms opened up, Jen, Shreve, Lamy and Bristol decided on custom cabinets, tables and other furnishings. One result of their conversations was a custom entertainment center crafted by Bristol Woodworking out of walnut.

“Cynthia really drove home how she felt about walnut,” Jen says. “I was going to choose a light gray or white finish. But she said walnut would really work with the fireplace.”

Bristol also recalls Shreve saying “let’s make it sexy,” and the Bristol team suggested incorporating walnut burl veneer with a black inset bead. Burl is often used on the dashboards of high-end cars, such as Jaguars. The Bristol team came up with a sample, and Jen and Shreve loved it.

Then Jen and Shreve flipped the family room around so the television, which had been in the corner near the French door, was now centered on the new entertainment center.

“At one point, Cynthia said the family room was ‘severely under furnished,’” Jen says. “She found those tall, matching silver lamps and said: ‘I think you should get these. They’re metallic but kind of subtle.’”

Shreve also suggested the gray-and-white patterned rug. When Jen balked—after all, she had two kids and two dogs—Shreve assured her the pattern would hide everything. And, “she was right,” Jen says.

By now Jen and Shreve worked so closely that they’d run ideas by each other at lightening speed. If it was good, one would say: “Love it. Perfect. Go.”

When the Girasoles first bought the house, the kitchen was the room that Jen, an enthusiastic cook, most wanted to redo. Ironically, after five years, it came last. Jen had wanted a table with a bench seat built in to the center island. Bristol Woodworking incorporated the walnut burl veneer in the table’s end pieces. The center island is also built with walnut. These choices brought the kitchen and family room together. 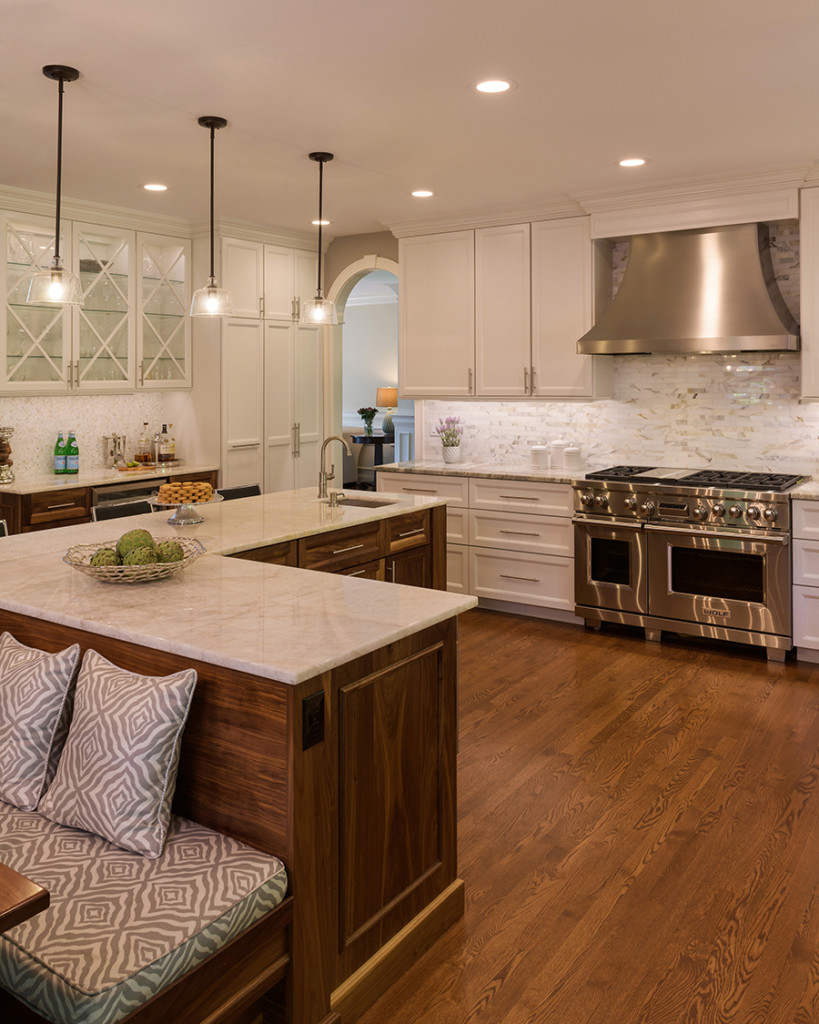 With plenty of room and superb functionality, this kitchen accommodates large parties and weeknight dinners with ease.

The island countertop and the bar’s countertop are both Crystal Ice Quartz. The other countertops are granite in an accent color. The tile on the wall is Calacatta Gold. The floors, which are original to the house, are oak but stained to be a bit darker in English Chestnut.

All the appliances were purchased from Baron’s Major Brands in Manchester: the dual-oven Wolf range, Vent-a-Hood and Sub-Zero refrigerator. “I love to entertain,” Jen says. “Having two ovens—one big and one small—is really convenient. I can heat up hors d’oeuvres or bake a pie while finishing up a roast.”

Bristol Woodworking built the custom cabinets, which included pullout drawers for the food pantry and a built-in spice rack. Perhaps one of the coolest features they installed was a magic corner manufactured by LeMans. Rather than a Lazy Susan, it is a set of beautifully engineered trays that swivel out.

“I would never have been able to do all of this without Cynthia, Denis, Tim and his crew,” Jen says. “When I walk in the house, I feel happy and much more relaxed.”

The home’s renovation was completed in fall 2017; and Shreve, who passed away just months later, considered it to be some of her very best work. “I really miss her,” Jen says.