The Joys of Downsizing to a Harborside Apartment

After living for twenty-five years in a big house near the beach, a homeowner enjoys the new experiences and numerous amenities of a brand-new, stylish, downtown Portsmouth apartment.

Leaving a home you've spent most of your adult life in is never easy. "I adored this house, along with my beautiful gardens and wonderful neighbors," the homeowner says. But tending to those gardens? Keeping up with household repairs and maintenance? And removing snow from the driveway? These activities are happily relegated to this homeowner's past, thanks to a recent move to an extraordi­nary condominium in downtown Portsmouth.

The right place, the right time

Nearing retirement age, the homeowner was looking to spend more time enjoying life and less time taking care of a big house, and became very interested upon hearing that offices were be­ing converted to residential space in a rehabilitated Portsmouth building. The location was ideal, with countless stores, restaurants, galleries and several theaters only a walk away. The views of the historic Memorial Bridge-across the Piscataqua River to Badgers Island and Kittery, Maine-are some of the best in town.

So the big home was sold and the new space-which consist­ed of steel and concrete-was acquired.

The homeowner 's first decision was to hire an architect to help figure out a design. "I was concerned about the flow of the space, as I entertain frequently but need private space and a home of­fice," the homeowner says. Also on the list was accommodating an elderly parent who visited often and who could potentially live here; every room had to be wheelchair-accessible. Finally, the homeowner wanted to maximize the spectacular views up and down the river.

Putting together the design team

The homeowner's friend and former neighbor, who was delight­ed with her new home, recommended speaking to her architect, Lisa DeStefano of DeStefano Architects in Portsmouth. "My first order of business was to sit and talk with Lisa about my hopes and desires for this space," the homeowner remembers. 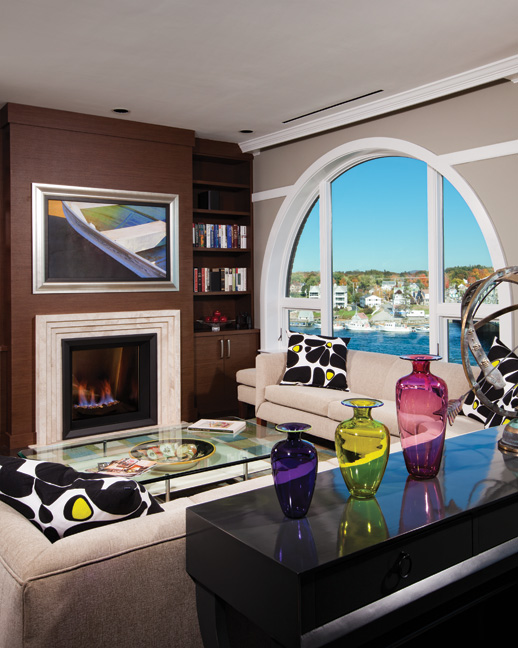 The homeowner enjoys views of Kittery, Maine, from the living room and the dining room. The television above the fireplace is concealed with framed artwork by Seacoast painter Jay Schadler.

DeStefano says that with the raw space, she and the home-owner had great flexibility to create a design to met all these needs. "I wanted the design to take advantage of the great windows, and the energy of seeing boats come up and down the river." In her scheme, the rooms with the views would become the living room, dining room, master bedroom and office. The patio overlooks Prescott Park, which DeStefano calls "a more serene location."

For this project, DeStefano says that her biggest challenge was making the most of the space. "In a freestanding home, there is a basement for all the mechanicals, but we didn't have that luxury here," she says. "Every inch, both horizontal and vertical, had to ac­commodate wiring, heating or ventilation."

While the apartment's completed height is ten feet, floor-to-ceiling, above the ceiling is a complex weaving of mechanical work, ductwork and electronics for lighting. "This took a lot of engineering and understanding of the steel structure, as well as coordination among audio-visual and lighting consultants and the sprinkler designer," DeStefano says. "We all had to work side by side, so everything had its path and wouldn't take space from the living area."

"We had great fun with the electronics. In fact, I think this apartment is smarter than its owner," the homeowner says with a smile. The homeowner enjoys being able to control all the lights and shades with the push of one button, which comes in handy at bedtime. "I'm also thrilled with DC Home System's work with the framed scrolling television, as I didn't want the living room to appear to be a media room." (DC Home Systems in Portsmouth worked with Media Décor in Fort Lauderdale, Florida, to conceal the television with framed artwork by Seacoast painter Jay Scha­dler. With a click of the remote, Schadler's art silently scrolls to ex­pose a large, flat-screen television. 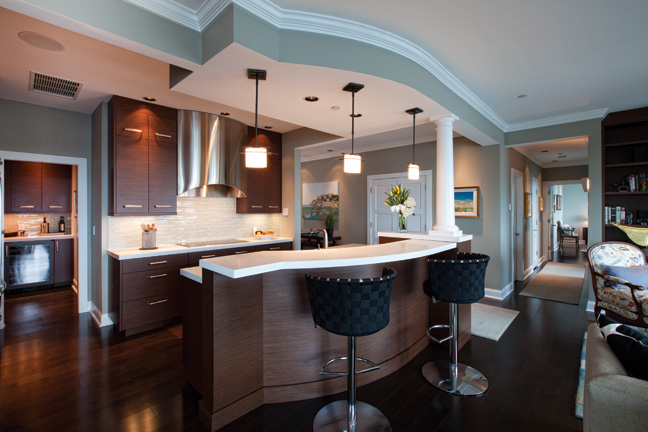 The spacious kitchen is made from wenge, a rich brown exotic hardwood with a warm texture, and its countertops are quartz, which is harder than granite, Purswell says. DeStefano says the strong horizontal lines give the space more width. The flowers in the entry are courtesy of Jardiniere Florist.

One of the biggest changes this homeowner made with the move to Portsmouth was a new style of interior design. "My for­mer home was traditional," the homeowner says. "I had a beauti­ful kitchen with white cabinets, black granite countertops and a black-and-white tile floor. It was a clean, coastal look but I wanted a New York-loft look for this apartment.

"Fortunately, Lisa didn't make this change of style too jarring for me," the homeowner continues. "She incorporated a crown mold­ing that works well with traditional tones and contemporary lines. She also did an excellent job utilizing space-a friend who down­sized from a house even bigger than mine gave me three pieces of advice: storage, storage, storage. In my apartment, I have more storage space than I had in my house."

Creating the heart of the home, the kitchen

One source for all that additional space is the kitchen, where the cabinets go all the way to the ceiling. DeStefano asked Scott Pur­swell of Dovetailed Kitchens in Portsmouth to help with this room. "The homeowner came to the showroom and really liked our de­signs," Purswell says.

At this first meeting, the homeowner remembers Purswell "handing over a stack of magazines, with NEW HAMPSHIRE HOME right on top, and suggested tearing out pages with designs I found appealing."

Initially, the homeowner gravitated to deep red woods for a more contemporary look and finally settled on wenge-a rich brown exotic hardwood with a warm texture-for the kitchen cabinets, as well as bookshelves in the office and living room and a china cabinet in the dining room.

Purswell wanted "everything to have a place in this kitchen," so he included adjustable drawers for knife storage and spices; slide-out drawers on each side of the cooktop for pots and pans; and a dishwasher on each side of the sink. "This way, the homeowner can do a half-load of dishes at a time," he says.

Purswell also included plenty of workspace on each side of the fridge-four feet. The walk-in pantry has a lot of room for food prep and bar set up, plenty of outlets, a wine fridge, storage for liquor and a sink. "When I have larger parties," the homeowner says, "caterers love this area for staging. It even turns into a work space for me when just a few guests are here, which allows me to be in the kitchen enjoying my company." 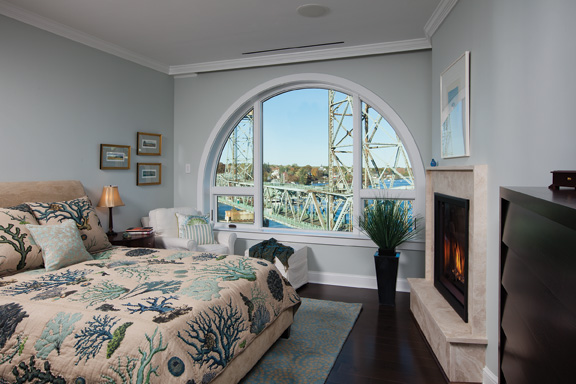 The homeowner enjoys views of the historic Memorial Bridge from the master bedroom, whose décor—which includes an extraordinary hand-stitched bedspread from Somnia—picks up on the colors of the water and the bridge.

To the rescue in the dining room

Another design statement is readily apparent in the dining room, where the homeowner chose a striking kidney-shaped table made from gray oak by B&BItalia in Milan, Italy, that comfortably seats eight. But when the homeowner called Montage in Boston, where the table came from, to inquire about a cabinet for the dining room, they didn't have anything to meet the homeowner's specification: it would have to be red, to match the color of the roof in Eric Aho's painting of the Mount Washington hotel that would hang above it.

The homeowner then remembered that Purswell had a line of laminated cabinetry and asked him to help, which he did. "The cabinet he designed and made is perfect," the homeowner says. "It's fun, and its glossy red color really pops in that location, bringing a little whimsy into the apartment."

At the beginning of the second year in this new home, the homeowner is surprised at how quiet it is. "I thought that liv­ing in downtown Portsmouth next to the bridge would be noisy. But once I close my door, I'm in my own little cocoon." Sitting on the patio, the homeowner enjoys performances in Prescott Park-"I memorized Peter Pan the first summer I was here." What's more, boat trips are an elevator-ride away, downstairs to the marina."

"I feel blessed when we can create something where the homeowner is so pleased," DeStefano says.