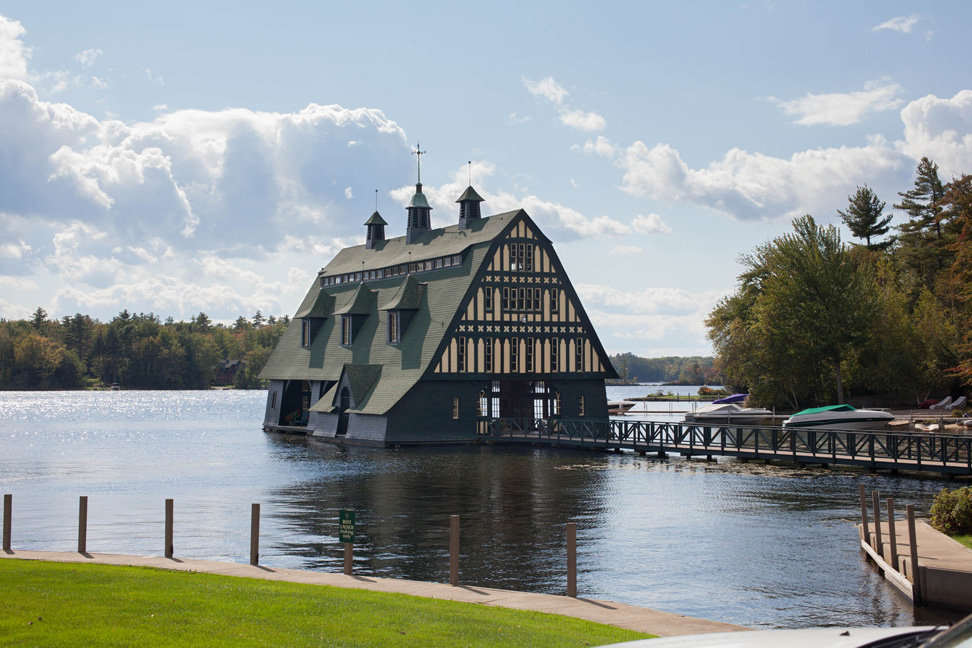 For more than one hundred years, the Swallow Boathouse has been a land­mark on Lake Winnipesaukee, and has adapted to its owners' changing needs over time.

"The Swallow Boathouse is one of the most majestic structures in New Hampshire," says architectural historian James L. Garvin of Concord. "It's a unique testament to an era like no other in our history."

A landmark on Kona Farm

The Swallow Boathouse's history begins in the early twentieth century. Starting in the 1890s, the New Hampshire Board of Agriculture sought buyers for "abandoned farms," focusing efforts on wealthy men who could consolidate farm properties and develop "magnificent country estates" statewide.

One such man was Herbert Dumaresq, who by 1913 had bought 2,500 acres, along with nearby islands, on Lake Winnipesaukee. Dumaresq named his estate Kona Farm, after the young hero of a popular and roman­tic Lake Winnipesaukee legend. In its heyday, the estate featured a Tudor Revival-style main residence (today the Kona Mansion Inn), three elabo­rate boathouses, two large barns and associated outbuildings, all designed by Boston architect Harry J. Carlson.

The Swallow Boathouse was the sec­ond of three boathouses constructed at Kona Farm and one of two designed to accommodate the 63.11-foot lux­ury steam yacht Swallow (acquired by Dumaresq in 1905).

The New Hampshire Boat Museum in Wolfeboro, which opens on May 26 features new exhibits, including vintage mahogany and antique boats, sailboats and canoes.

Other highlights of the summer include the New England Vintage Boat Auction on July 21 and the Thirty-Fifth Annual Alton Bay Boat Show on August 11. August 16 is the Fifth Annual Boathouse Tour on Lake Winnipesaukee. Tour-goers may go by car or water in a classic wooden driven by a boat museum volunteer.

At the time, boathouses were impor­tant recreational components of water­front estates. In discussing exemplary properties, the 1907 edition of New Hampshire Farms for Summer Homes notes "others which come at once to mind include Kona Farm … just now being adorned with a $15,000 boat­house." The Swallow Boathouse soars to forty-five feet, with double fold­ing doors on the lakeside that opened inward for the two-masted Swallow.

The innovative design of the Swallow Boathouse was also featured in the July 1920 issue of Country Life in America as "A Novel Boathouse on the estate of Mr. Herbert Dumaresq, Lake Winnipesaukee N.H., Harry J. Carlson, architect." It is noted how "the archi­tect solved most cleverly the problem of making attractive the immense expanse of roof" by punctuating the boat­house's steep gambrel roof with cupo­las, clerestory windows and projecting dormers. The boathouse interior is flooded by natural light.

Unfortunately, like many other coun­try estates in the changing economic times around World War I, Kona Farm proved to be untenable for its owners.

The property was advertised for sale from 1913 onward, and records indicate that outlying land and islands were sold off gradually, reducing the estate to 1,500 acres by the late 1930s. In 1939, the Dumaresqs were compelled to leave the property.

In early 1940s, the Swallow Boathouse and surrounding acreage was sold to Dudley and Madeleine Hare, who used their 46-acre summer property to establish Camp Windward for boys, which was in operation from 1942 to 1950.

In the late 1970s, the Hare family started the process to secure formal recognition for the Swallow Boathouse, and in 1980, the boathouse was listed in the National Register of Historic Places. Garvin, then curator at the New Hampshire Historical Society, was asked to help Dudley and Madeleine's son Peter Hare with the nomination. Following the procedures of that time, Garvin was provided with two black-and-white photographs of the boat­house to assist him in writing a descrip­tion. It would be thirty-three years before Garvin would actually visit the property in September 2011. "I waited patiently for decades for this visit," Garvin says. "This was the fulfillment of a lifelong dream!"

In the early 1980s, under the direc­tion of Peter Hare and Gil Leonard, the thirty-six acre property around the boathouse was developed into the Windward Harbor condominium com­munity. The overall plan showcases the historic Swallow Boathouse, which functions as the centerpiece of the pri­vate community and is open on occa­sion to the public for special events.

The plan and descriptive notes pub­lished in Country Life in America in 1920 have aided in the maintenance and restoration of the Swallow Boathouse. While the boathouse appears to float on the water, it is actually built on a 80-foot-by-37-foot crib system that rests on eight stone piers, originally pro­viding for a 72-foot-by-17½-foot open berth with freight platforms on three sides. Floored over since the 1980s, this basin is visible in interior images of the boathouse that date to the Camp Windward era.

While routine repairs are performed on an annual basis, larger projects were undertaken in preparation for the cen­tennial of the Swallow Boathouse, which was celebrated in 2010. Major structural work to the boathouse's underpinnings was successfully completed during the winters of 2005 through 2008. Over time, owners have maintained the boat­house in accordance with preservation standards, with minimal changes to its original materials and appearance (the covered walkway seen in historic images was removed in the 1950s due to storm damage).

In 2009-2010, a narrow walkway out to the boathouse was replaced with a wider one with a wooden rail modeled on the original. Maggie Stier, field service representative of the New Hampshire Preservation Alliance, supported the project, which was guided by the archi­tect's published plan. Calling the boat­house "perhaps the most architecturally significant of the remaining boathouses in our state," Stier said the proposal would "restore the walkway to a more historically accurate configuration."

Members of the Hare family con­tinue to play an active role in the stew­ardship of the Swallow Boathouse, while remarking on the extraordinary dedication to the boathouse shown by residents of the Windward Harbor community.

"It was with the cooperation, sup­port and financial backing of all the Windward Harbor owners that this overall effort to maintain and repair the Swallow Boathouse has and continues to be made possible," Peter Hare says. "Their love and respect for the struc­ture has been a delight to behold."