The traditional and the sophisticated come together on Lake Sunapee 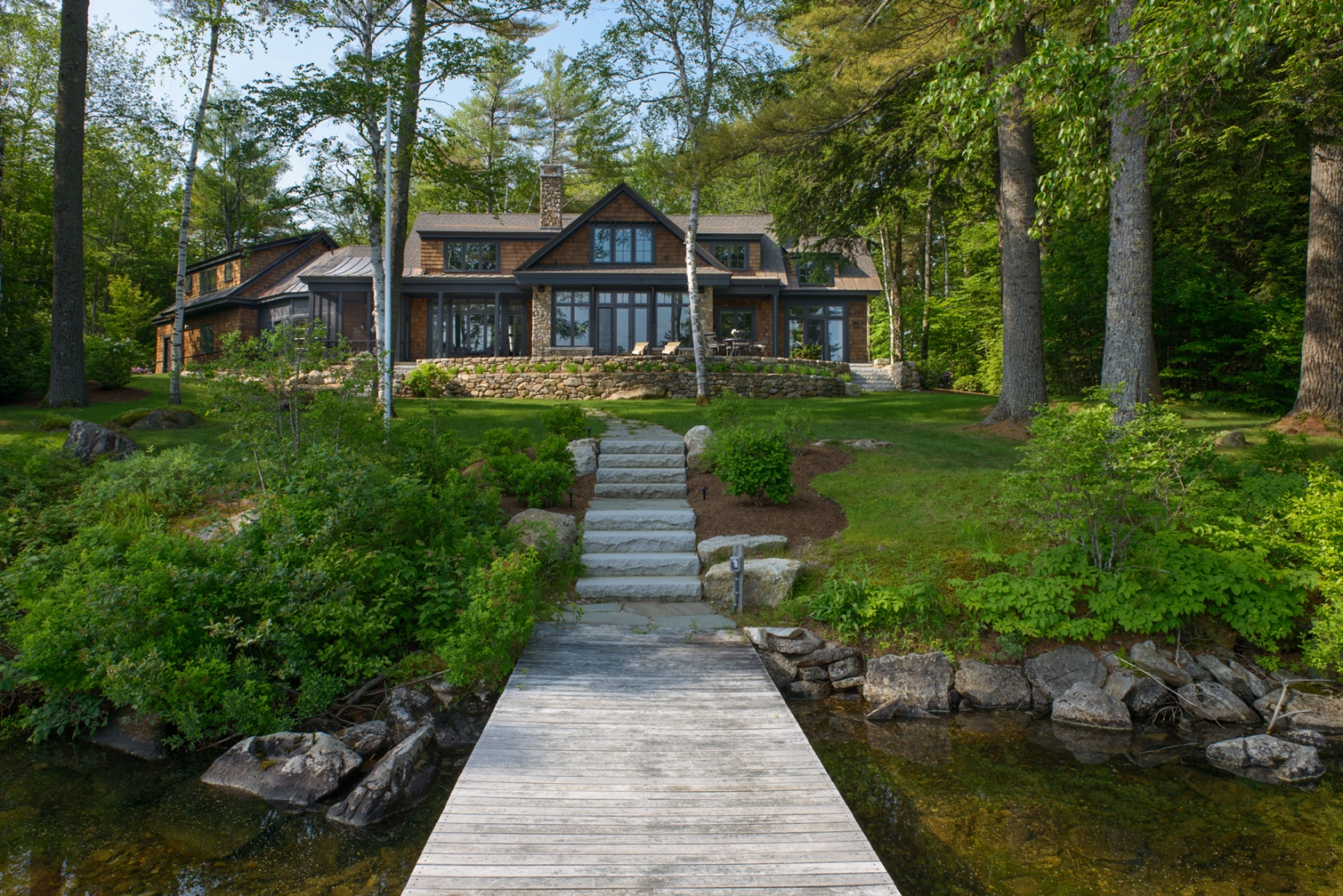 The view from the lake is of a classic, inviting lake house with graceful lines and numerous windows. Jeremy Bonin of Bonin Architects & Associates in New London and Meredith designed the house, which was built by Jay Tucker of Old Hampshire Designs in New London. Peter Schiess of Landforms in Bow did the landscaping.

On a quiet cove of Lake Sunapee stands a house that is a study in pleasing contrasts, designed by Jeremy Bonin of Bonin Architects & Associates in New London and Meredith.

On the outside, Birch Bay House is a classic, though exceptionally well-designed, cedar-shingled lake house with dark gray trim and fieldstone accents. Inside, its light and sophisticated rooms hint at warmer climes, with ten-foot coffered ceilings, numerous high windows and a design palette of warm neutrals. The overall effect is so successful that in 2015, the house won the New Hampshire Home Design Award for Home of the Year; the judges praised its “calm and clean ambiance” and called it the “ultimate lakeside residence and retreat.”

The couple who commissioned Bonin Architects & Associates to design this house several years ago (it was finished in 2013) wanted a retreat that offered privacy while also connecting to the lake with views and easy access. The homeowners wanted a comfortable house with multiple gathering places for entertaining friends and family. The owners had practical goals as well: energy efficiency and the option of one-floor living so they would be able to “age in” to the house.

The resulting five-thousand-square-foot, two-story dwelling looks onto the lake, over a lawn that slopes gently to the water. Doors from both the living room and the master bedroom open to a curved stone patio that transitions the inside of the house to the outdoors. A stone footpath winds through the lawn from the house to a small wooden boat dock. Mature trees on the property provide shade and privacy; stone walls and a variety of plantings, including rhododendrons and various evergreens, create a natural and intimate outdoor living space. A screened-in porch also extends the livable area in pleasant weather.

The house has four bedrooms—a master on the ground floor and three upstairs. Downstairs, there is an open kitchen/dining area, a living room, the wife’s office, a laundry area, and a mudroom that connects to the front entry and lakeside of the house. Upstairs, in addition to the guest rooms, there are a yoga room and a small sitting area. Above the three-car garage and accessible through a separate staircase is an office and entertainment room. Nearly every room in the house has a water view.

The interior is crisply finished with much attention to detail, including painted poplar trim with plaster walls; stained cherry accents; stained floors made from local white oak; and granite and marble countertops. The bathrooms and mudroom have porcelain tile. One of the most striking aspects of the interior is the coffered ceiling, with the innermost squares painted a soft gray to complement the shades of white employed elsewhere.

The team involved with the house included Bonin; builder Jay Tucker of Old Hampshire Designs in New London; Christine Kelly of Christine Kelly Interiors in Darien, Connecticut; and landscaper Peter Schiess of Landforms in Bow. Bonin and his group collaborated in depth with the clients to create an exterior that addressed not only the lake but the context of houses on Lake Sunapee, while also incorporating the light and airy interior with detailed finishing.

Tucker describes the project as a particularly enjoyable one, in large part because the clients, architect and others all worked well together—“it was a great fit,” he says. The homeowners concur: ”We had a wonderful experience working with Jeremy, Jay, Christine and Peter, as well as with Bill Andrews of Old Hampshire Design. We were astonished that building a house could be such a pleasant experience.”

Tucker says he particularly liked producing all the fine detail—from the trimwork on the outside of the house to the coffered ceilings and built-in cabinets inside. The main challenge, he says, had to do with the house being near lake level, which required some creative engineering to reach the desired basement height.

For decorative elements, the homeowners decided to work with Kelly because they knew her—she had done the interior design for their home in Connecticut about fifteen years earlier.  Kelly and the wife clicked in terms of their aesthetic sensibility. “We were a perfect match,” Kelly says.

Kelly describes their initial visit to the house: “When we first drove up, our impression was ‘serene and peaceful,’” she says. With so many windows offering views of the lake, sky and surrounding trees, the outdoors was definitely going to be a focal point of the design, Kelly explains. To harmonize with those views and keep the overall feel relaxed and fresh, she used a neutral palette for the upholstered furniture and rugs. Some warm wood items (such as the dining room table) and wrought-iron pieces (such as the light fixtures) provide a subtle graphic look. “There’s a little bit of the old mixed with a bit of the new,” Kelly says. The overall result is tranquil and sophisticated. 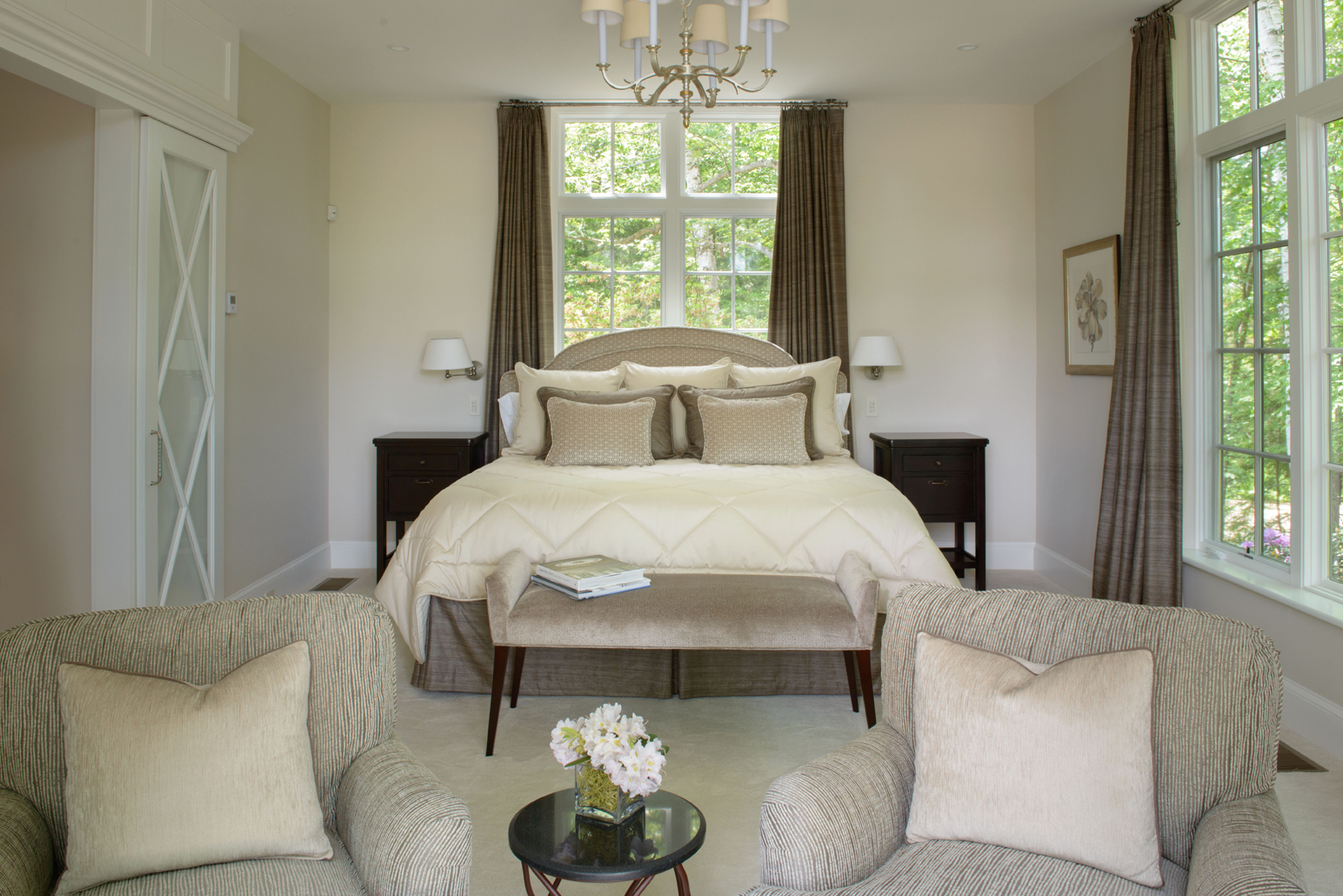 The master bedroom is on the ground floor and includes a seating area (in foreground) looking out at the water. The room is one of the favorite spaces for designer Christine Kelly of Christine Kelly Interiors in Darien, Connecticut.

One of Kelly’s favorite rooms is the first-floor master bedroom, which has tall windows on either side of a glass door that opens onto the patio overlooking the lake. Near the foot of the bed, two comfortable easy chairs face the lake. “It’s a wonderful, relaxing setting to sit and have coffee in the morning,” Kelly says. She notes that this is the only room in the house that has window treatments. The curtains slide all the way to the window frames so they don’t block the view but can be closed for privacy as needed.

Barn-style glass doors with diamond-shaped panes between the room and the rest of the house provide an expansive feeling when open, but can be shut for privacy as well.

The master bathroom is tiled in several neutral shades, with contrasting panels of smaller tiles in slightly darker shades for decoration. The tub is in an alcove with a curved ceiling that sets the area off as its own serene space.

The living room—which also has an expanse of lake view due to a glass door and tall windows facing the lake—has a dark gray soapstone fireplace that contrasts pleasingly with the neutral palette throughout most of the rest of the room. The living room’s cream-and-buff rug was custom-made for the clients by Stark Carpet in New York City. The rug is a mixture of wool and silk that is very durable, according to Kelly, who tried to use sturdy fabrics and floor coverings throughout, in keeping with the needs of a lake house.

The kitchen—which has a large center island with both work space and seating—features white painted cabinetry from Crown Point Cabinetry in Claremont. Three slender pendant lights over the island help separate the kitchen from the dining area, though both share an open space with a view of the lake.

Upstairs there is a large, simply furnished room with plenty of natural light that is designed for yoga, and three guest rooms—one a master with its own bathroom. These guest rooms all have built-in shelves and drawers in the closets. A small, welcoming sitting area off the upstairs hall provides a spot for informal gathering, TV watching or reading. Above the three-car garage and accessible by a separate staircase is the husband’s office as well as  an entertainment room with large flat-screen TV and plenty of comfortable seating, plus a wet bar. 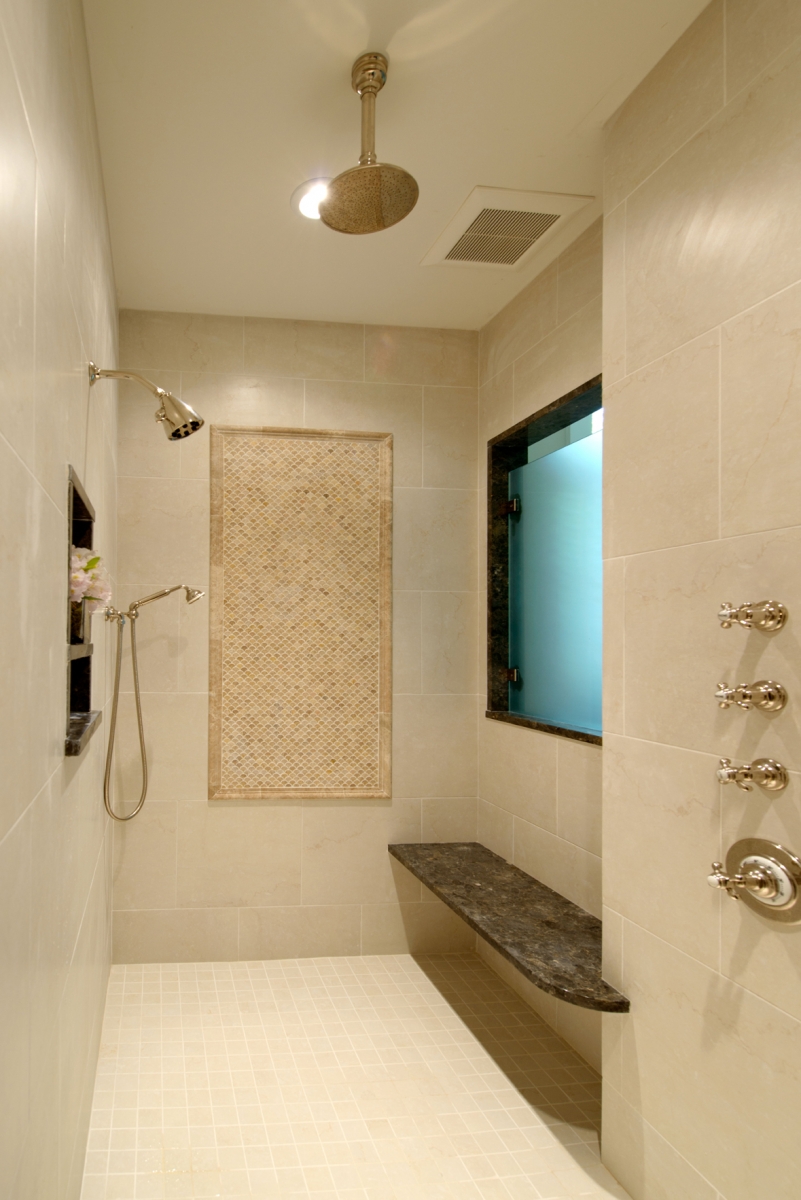 One of the features the homeowners requested was one-floor living in case they should need that in the future. With the master bedroom suite and an enclosed washer/dryer laundry area on the ground floor, the home is designed for aging in place.

Another forward-thinking aspect of the house is its energy efficiency. It is built with a hybrid (closed cell foam and blown-in fiberglass insulation) high R-value configuration and an air-sealed envelope. The HVAC system includes low-velocity heating and cooling run by a ground-source heat pump; hybrid, domestic hot-water heaters; and a balanced, heat-recovery ventilation system.

A lake house should address the lake, and Birch Bay House does this superbly. As the judges in the New Hampshire Home Design Awards wrote: “There is a nice series of spaces on the lakeside that provide varying degrees of shelter and privacy while [the homeowners are] enjoying the day and evening outdoors. The interiors are well thought out with the primary living spaces located to take advantage of the serene water views. The stone patio overlooking the lake is perhaps the most appealing spot of all. This was installed by Landforms. “The homeowners wanted a big patio with a built-in grill area,” Schiess says. “They like to cook.”

Both the patio and the walkway to the water incorporated pervious materials designed to handle water and drainage, he explains. Schiess also did the plantings, working around mature trees on the property as much as possible as well as strategically placing some evergreens to provide privacy and focus the views.

He used a wide variety of plantings in the flowerbeds, including hostas, phlox, lilies, coneflowers and coral bells. “The garden was designed to have color from early spring to late fall, and it works well,” he says.

Birch Bay House is an excellent example of a home designed in a traditional but not staid fashion. It surprises, but gently. “The exterior is a Shingle style. It has that lake look,” Tucker says. “Inside, it’s very finely detailed, and light and white. The very high ceilings create an airy feeling, almost like you’d find in the tropics.”

It’s an easy, breezy getaway that maximizes its lakeside location with stunning views and soothing interiors. 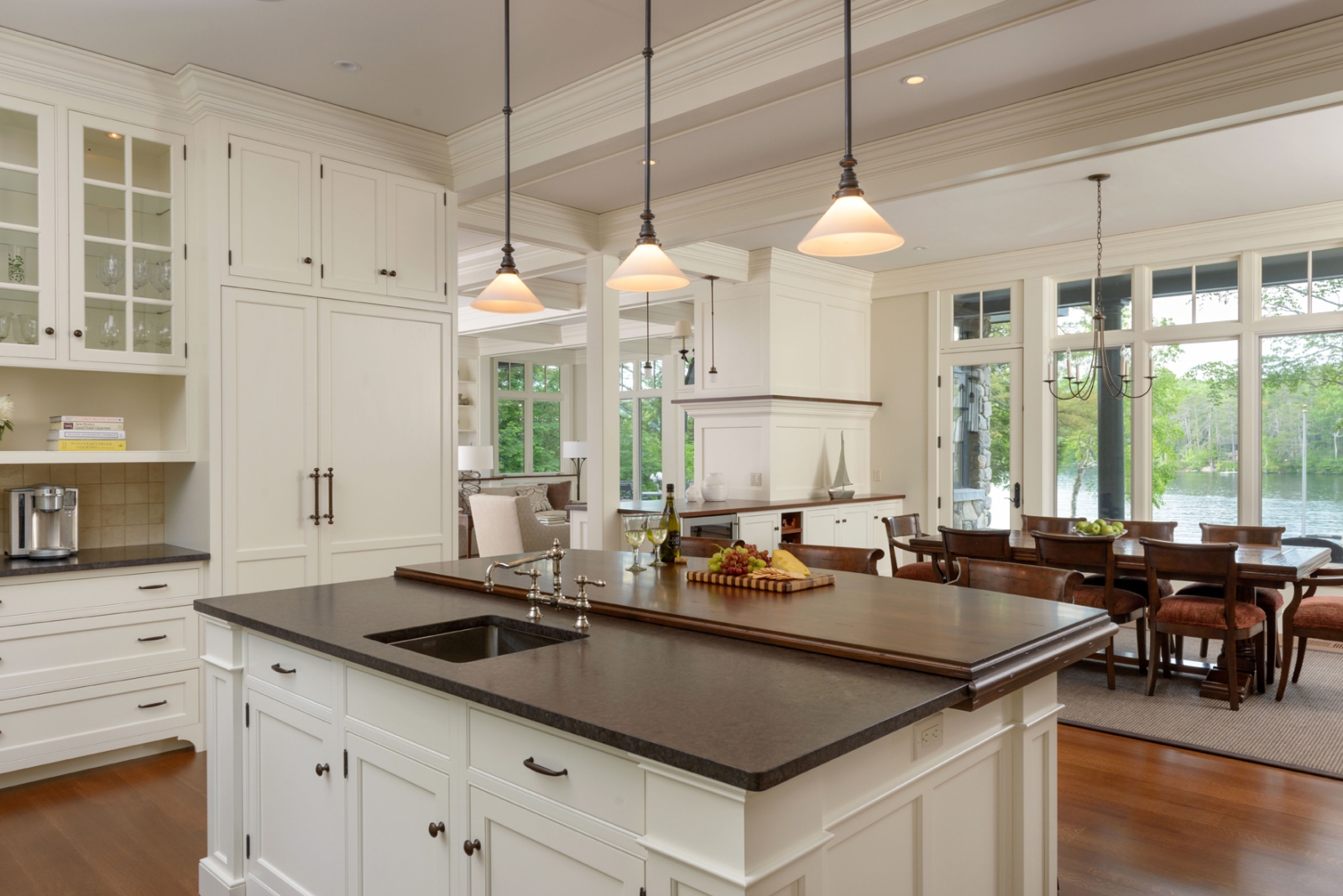