The Warner House is Beginning Its Fourth Century

The landmark Warner House in Portsmouth is the earliest building of its type in New England.

If the British television series Downton Abbey were set in Colonial America instead of Edwardian England, there’s a chance that Downton would resemble Portsmouth’s eighteenth-century Warner House.

The Georgian-style Warner House—a National Historic Landmark, built between 1715 and 1718—has a rich history. Like Downton, its art and architecture are recognized internationally by historians. Like the Crawley family, Downton Abbey’s owners, generations of extended family lived at the Warner House up until the 1930s.

But whereas Downton Abbey is fictional, the Warner House is very real—a distinctive landmark in a city that treasures its history. “Portsmouth is one of a few communities in the country that still retains much of its eighteenth-century architecture,” says Sandra Rux, curator and chair of the Warner House Association’s board of governors. “The city has an unusual amount of intact historic landmarks.”

The Warner House, which celebrated its three hundredth anniversary in 2016, is located on Daniel Street in downtown Portsmouth, a short walk from the Memorial Bridge connecting Portsmouth to Kittery, Maine. A fashionable thoroughfare in the eighteenth century, the street led to the banks of the Piscataqua River, once lined with warehouses and docks. The docks and warehouses are gone, replaced by the structures and hustle of modern-day life. Yet the Warner House, set back slightly from the street, is a reminder of an earlier Portsmouth; it’s the earliest building of its type in New England. “Houses like this don’t exist anymore in the United States,” says Warner House Director Jeff Hopper. “It was the largest mansion in Portsmouth when it was built.” 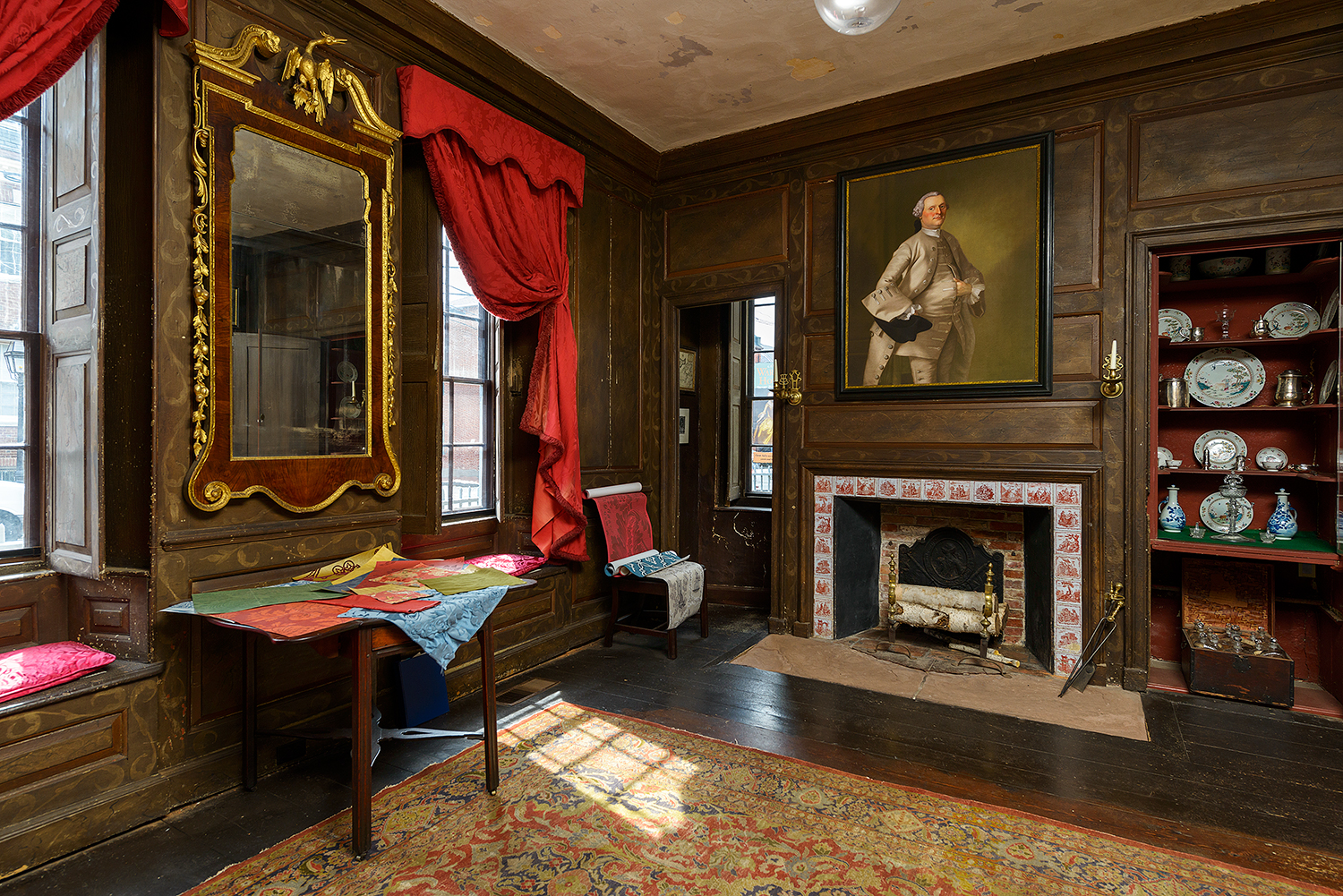 The front sitting room, or library, of the Warner House was a place for evening entertainment and conversation when Jonathan Warner lived there during the late eighteenth century. A portrait of Warner hangs over the fireplace. The marbleized walls were re-created during a 1939 restoration.

A home for successful entrepreneurs

Named for merchant Jonathan Warner (1726–1814), who lived in the house from 1760 to 1814, the red brick home was originally built for Archibald Macpheadris (circa 1680–1729), an enterprising Scots Irish sea captain who became one of Portsmouth’s most successful entrepreneurs.

Jonathan, also a thriving merchant, married Archibald’s daughter, Mary. After Warner passed away, his niece Elizabeth Sherburne inherited the home. Her extended family, including cousins and grandchildren, lived there throughout the nineteenth and early twentieth centuries. Warner descendants—the Sherburne, Penhallow and Whipple families—lived in the house until the 1930s, when it was put up for sale.

Slated for demolition to make way for a gas station, the home was saved through the efforts of Portsmouth residents who raised money to purchase the Warner House in 1932 and make it a museum. The Warner House Association was established to run the museum. 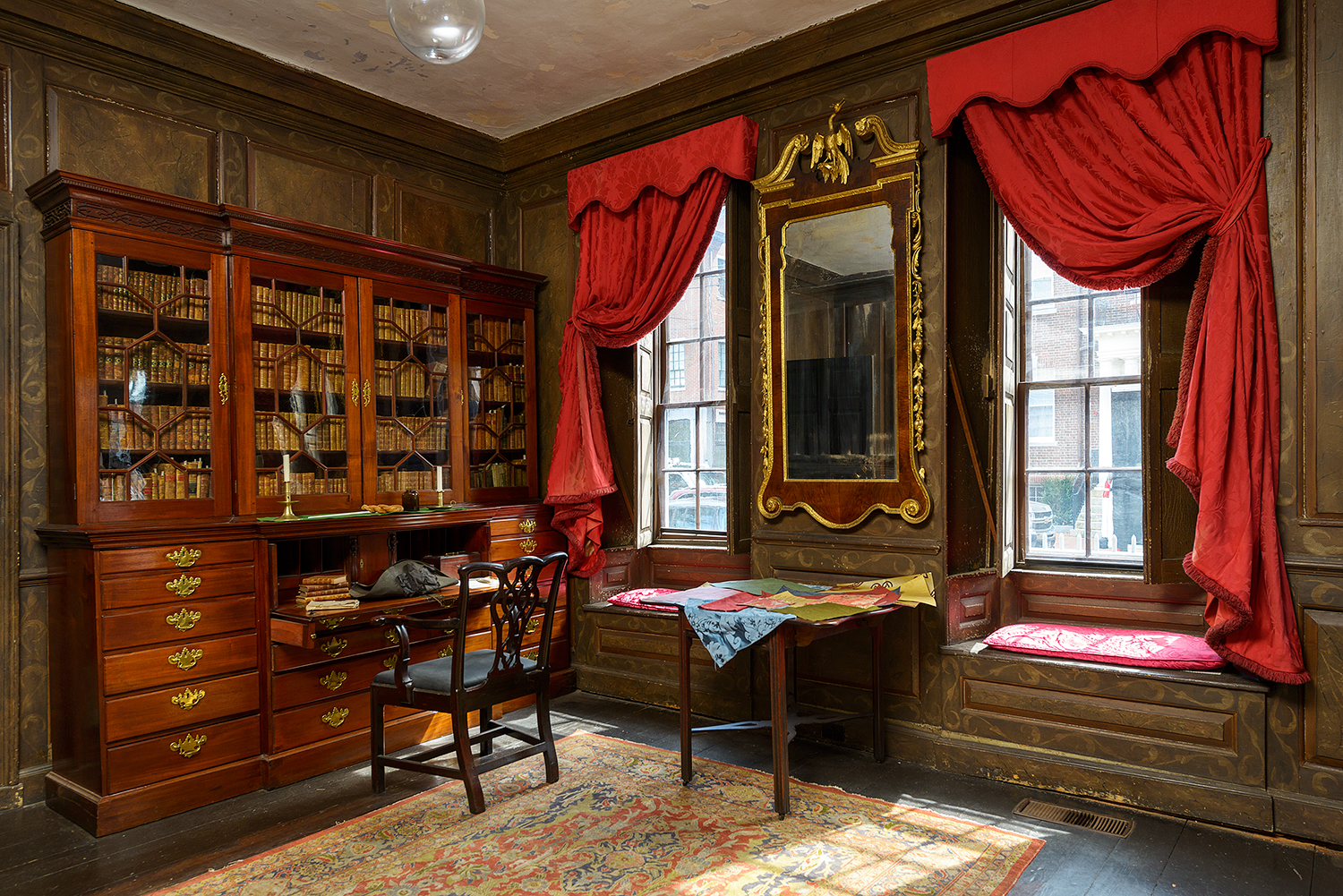 One of the home’s most impressive pieces of furniture is this mahogany bookcase, commissioned by Jonathan Warner specifically for the sitting room. Attributed to “Robert Harrold, Portsmouth, NH, 1765–1775,” the bookcase includes a collection of Polly Warner’s books.

The most impressive residence in Portsmouth

Archibald’s story is unique to its time. “When he came to Portsmouth, the city was like the wild west in the early eighteenth century,” Hopper says. “People came here to get rich.”

The Warner House is open June through mid-October, Wednesday–Monday, 11 a.m.–4 p.m. Off-season tours are available by appointment. Admission is $7; $3 for children ages seven through twelve; children younger than age seven are admitted free of charge.

Archibald hired English master-builder John Drew to construct his new home. Upon its completion in 1716, the Warner House was considered the most impressive residence in Portsmouth, designed and built in the style of an eighteenth-century London townhouse.

Among the distinctive elements that have survived are colorful murals lining the plaster walls of the main staircase, the oldest known eighteenth-century murals in the United States. Painted between 1718 and 1720, possibly by local artist Nehemiah Partridge, the four murals are a commentary—although their meanings are somewhat mysterious to modern visitors—on Archibald’s early life in Britain and his life in America. Images include the Biblical sacrifice of Abraham; a woman spinning; an eagle swooping in to snatch a chicken; and two smaller figures who could be Archibald and his wife, Sarah Wentworth. Two Mohawk figures on one wall may represent the Mohawks who traveled to London in 1710 to visit Queen Anne and became the toast of the city. Another mystery is a male figure on horseback, possibly British gentry, who has both a gold crown and “P” emblazoned on his sabretache, a pocket used by cavalry officers for easy access to paper and also used as a portable writing desk. At some point, the side wall murals were covered by wallpaper; in 1853, a child playing on the stairs accidentally tore off a piece of the paper, revealing paint underneath. The murals were restored in the late 1980s and again in the early 2000s.

When the Warner House was purchased in 1932, it was nearly empty. Among its surviving contents was a set of caribou antlers, still hanging in the front hall, possibly a gift to Archibald from Sarah’s father, John Wentworth. Other pieces have been donated back by various descendants. 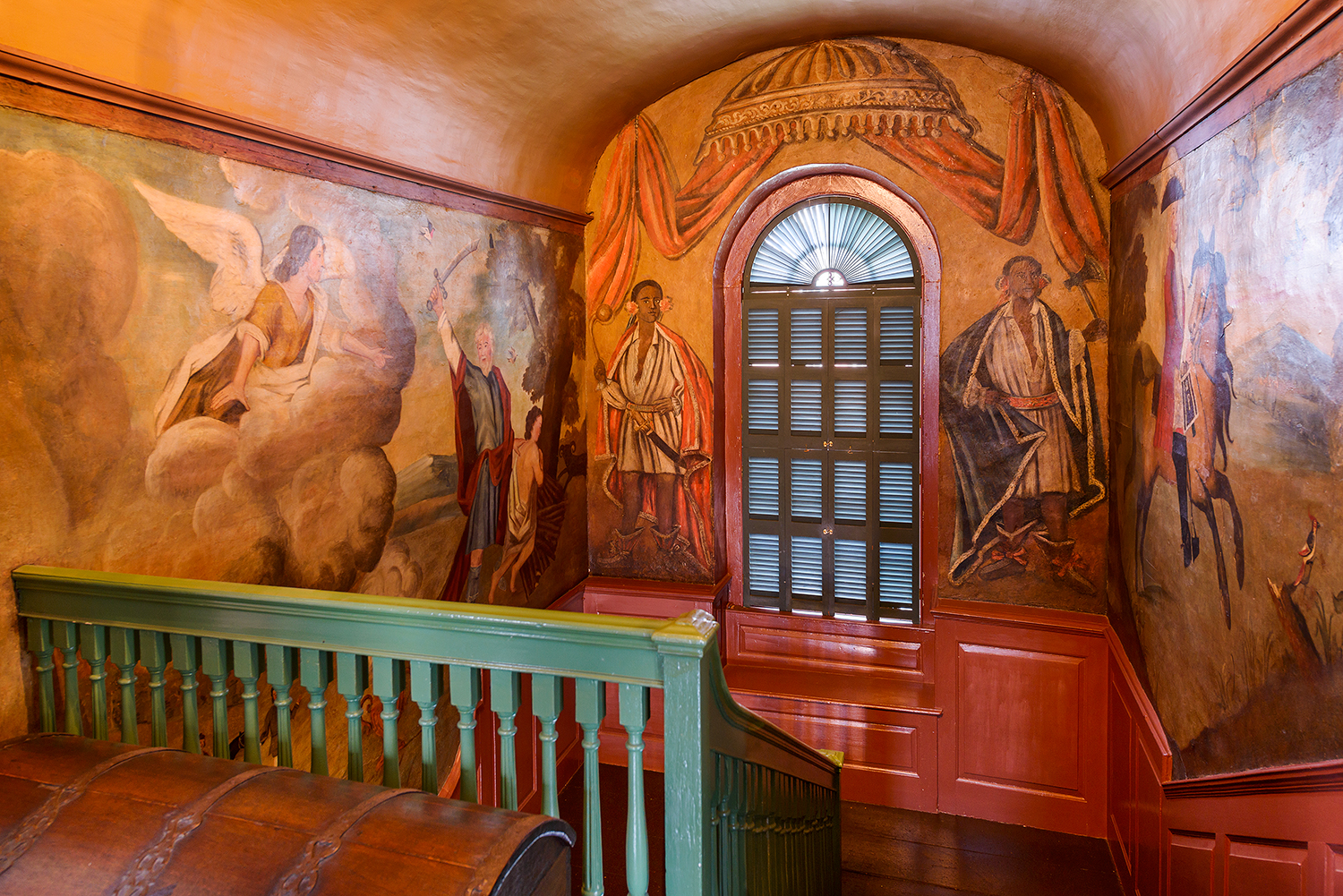 he colorful murals in the Warner House’s entry hall and main staircase, possibly by Nehemiah Partridge (1683–c. 1737), depict a number of scenes, including the sacrifice of Abraham (top photo) and possibly the visit of two Mohawk sachems to London in 1710.

Tours of the Warner House tell the stories of its residents, room by room, through its collections. In the downstairs dining room are five paintings of Warner family members by Joseph Blackburn, a prominent English portrait painter who counted John Singleton Copley among his students. Painted in 1761, the year after Jonathan Warner married Mary Macpheadris Osborne, the portraits show an affluent family at the height of their social power. Most striking is the Blackburn portrait of eleven-year-old Mary “Polly” Warner, the young daughter of Jonathan and his first wife Mary Nelson.

Furnishings include some of the finest examples of work by Portsmouth cabinetmakers, who helped furnish the grand homes of local merchants and businessmen in the late eighteenth and early nineteenth centuries. According to Hopper, these objects were the result of prominent area merchants “showing off their homes” to court prospective buyers.

The Warners knew how to show off. Polly’s extensive collection of books—selected in London and each stamped with “Miss Warner” in gold lettering—is housed in the downstairs library in a grand mahogany bookcase, custom built by Portsmouth cabinetmaker Robert Harrold between 1765 and 1775, and the only piece of furniture specifically commissioned by Jonathan. Polly’s charming William and Mary-style writing desk, a gift from her father, sits on the upstairs landing. Also on the landing—where Archibald, and later Jonathan, would have greeted guests and business associates—sits a spectacular maple and walnut high chest of drawers that belonged to descendant John Sherburne. Inscribed with the date 1733, it’s the earliest known dated example of American Queen Anne furniture.

In Jonathan’s time, the most formal room was on the second floor, above the parlor (now the dining room). A place for both sleeping and socializing, the parlor showcases Jonathan’s conservative, but high, style. A curtained canopy bed—covered in green damask—stands in one corner, across from a tiled fireplace and mahogany chairs and a table. The paneled room is distinguished by its sprung floor (a clue that dancing was among the room’s entertainments) and its sparkling blue walls. Coated in “smalt,” a unique treatment of crushed cobalt blue glass tossed onto paint while wet, the room practically glitters when the sun shines through its windows.

Across from Jonathan’s bed chamber are two family bedrooms, currently interpreted to represent the Penhallow and Sherburne families, who lived in the house from the early 1800s to the early 1900s. Connected by a hidden passageway, used during the winter when the drafty main stairway and halls would have been unheated, the two rooms also include closets, a rarity in eighteenth-century homes. A stairway down to the kitchen from one of the bedrooms provided discreet passage for servants.

After the Civil War, a period of fascination with all things eighteenth-century—called the Colonial Revival—captured American imaginations. The Warner House became a beloved Portsmouth landmark. By the early 1900s, Evelyn Sherburne and her nephew Thomas Penhallow were using the home as a summer residence. Still, visitors often dropped by, hoping to glimpse inside (and, if they were polite and dressed appropriately, they would be allowed in).

Now, as Warner House staffers commemorate its three hundredth year, they marvel at how the home has transcended generations. “This house was really thought through,” Hopper says. “It was built to be a center for business transactions as well as function as a multifamily house. We’re looking forward to the next three hundred years.”