The Windsor chair: the king of American chairs

Windsor chairs pre-date the American Revolution, and a New Hampshire furniture maker explains why the design has never gone out of fashion.

They’re in every room at home—at the kitchen table, in the living room where we relax or read, at our desk, around the dining room table and outside on the patio. Most of us don’t give chairs more than a passing thought (Are they comfortable? Do they creak?).

But there’s a lot of thought that goes into designing a chair. In fact, architect Mies van der Rohe said, “There are endless possibilities and many problems —the chair has to be light, it has to be strong, it has to be comfortable. It is almost easier to build a skyscraper than a chair. That is why [English cabinetmaker Thomas] Chippendale is famous.”

When it comes to chair design in this country, there’s one style that has stood the test of time: the Windsor, made from wood with thin, turned spindles attached to a curved rail and a sculpted seat. The chairs are lightweight, durable and simple in design. When you see historic images of George Washington, Benjamin Franklin, Thomas Jefferson and John Adams crafting the Declaration of Independence in Philadelphia, they’re sitting in Windsor chairs. And when you go to homes today—whether their design is traditional or modern or anything in between—you could very well see a Windsor chair.

What is a Windsor chair?

Although the design originated in England—they were named for the town where chairs were made—Windsor chairs began appearing in this country in 1730. “America was a new country, with a new way of thinking,” says Doug Dimes, the second-generation owner of D. R. Dimes and Company, Ltd. in Northwood, which has made more than 150 styles of Windsor chairs during the past fifty years. “Hundreds of forms of Windsor chairs were made in the eighteenth century, and the chairs were regional in style. I can look at a chair today and tell you if it was made in New York, Rhode Island, Massachusetts or Connecticut. There’s even a difference between chairs made in Philadelphia and in Lancaster County, Pennsylvania.”

The best-known style of Windsor is the bow back with a semi-circular back and spindles attached to a saddle-like seat. (Windsors are also made in a comb-back style, with a comb-like rail atop the spindles.) The four legs are splayed, and can be simple or have elaborate turnings (some from the late 1700s were scored to resemble bamboo stalks). The legs are connected to one another by an H-shaped stretcher. Arms can terminate in a flat paddle or “knuckle,” and some even have a little writing desk attached. There are Windsor side chairs, armchairs, settees and rockers.

What so great about Windsor chairs?

Dimes says Windsor chairs are both “utilitarian and a piece of transparent sculpture.” They also complement a wide variety of design styles. While Windsor chairs look right at home in eighteenth-century homes and museums such as Historic Deerfield in Massachusetts, they also look great with contemporary furniture. “I remember delivering chairs to a house in Georgetown, Massachusetts, where everything was white and modern,” Dimes says. “And the chairs looked great. They are so lovely that they don’t seem old-fashioned.”

The variety of styles and turnings for the chairs makes them adaptable as far as interior design. “We can match the style of the chairs we build to the area they’re going to,” Dimes says. 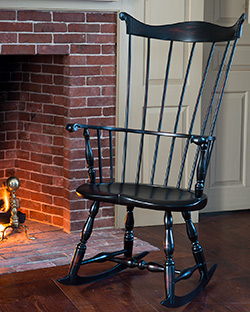 This Lancaster County comb back with rockers is a reproduction of a chair with the same name from the late-eighteenth century.

Dimes’s Windsors have wound up all over the world. In this country, the company has received commissions from the Smithsonian Institute, Old Sturbridge Village, Colonial Williamsburg, Historic Charleston and Independence Hall in Philadelphia. The company has also sent chairs to Norway, Korea, Japan and England. “We get inquiries from people in more than sixty countries each month,” Dimes says.

How Windsors are made

Most of Dimes’s chairs are made with Eastern white pine for the seats, oak for the bent back and maple for the legs. “But if a customer prefers maple seats, we can do that for most of our chairs,” he says.

All of Dimes’s Windsors have traditional joinery. Each of the spindles and legs is secured with a small wedge that flares on top of the joint. After the wedge is driven, the chair is sanded smooth before the finish is applied. “This attention to detail ensures that our chairs will last for generations,” Dimes says.

Dimes likes the fact that one doesn’t need a huge shop or a lot of tools to make Windsor chairs, which is what first attracted his father, Douglas Richard Dimes, for whom the company was named. His father began making chairs as a part-time venture, and his ad in Early American Life for Windsor writing arm chairs brought in two hundred orders in two weeks. “He worked like crazy to get those orders out,” the younger Dimes remembers, “and that’s what launched his business.”

He began his on-the-job training by sweeping floors when he was ten years old and at fifteen began sanding chairs. “Every summer, I had a different job,” Dimes says. “One summer, I was making seats, and another I was turning legs.” He went to the University of New Hampshire and studied business at the Whittemore School. When he joined the family business full-time, he concentrated on marketing and delivering orders. “Fortunately, I seemed to learn the craft quickly,” Dimes says. “When I had to turn, I could turn. When I had to carve, I could do that. I spent many nights in the shop developing my skills.”

In the early 1980s, D. R. Dimes started getting requests for tables and cabinets, and began producing those. The company now makes the Harkness tables for Phillips Exeter Academy and was chosen to replicate 101 desks for the Edward M. Kennedy Institute in Boston, where the entire U.S. Senate chamber will be reproduced. The institute opens in May.

Today, in addition to its signature Windsor chairs, the company also offers reproduction Early American and English tables, cupboards, sideboards, beds, chests and kitchen cabinets. The Northwood facility has grown to almost an acre of buildings, for operations and storage. “My father once said, ‘Beautiful, useful and enduring, there is nothing more American than the Windsor chair.’ And he was absolutely correct,” Dimes says.