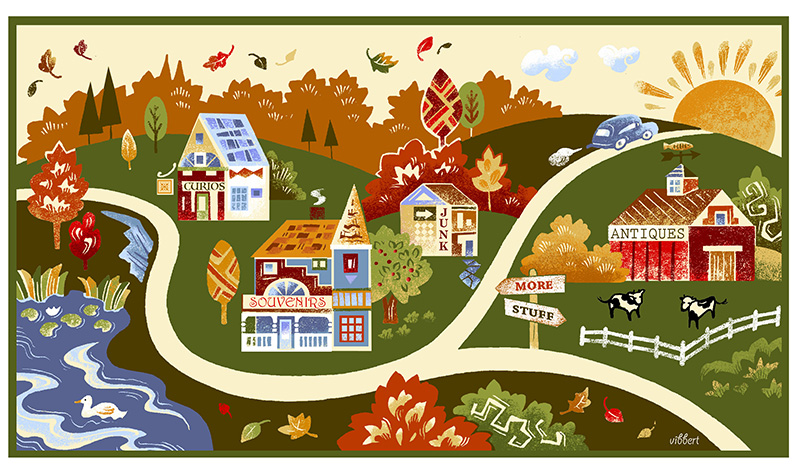 Every year or two for more than a decade after I graduated from college, I loaded most of my possessions into a compact car and moved on to the next likely place. I was seeking a town, and a job, that would give me time to write as well as surroundings with some measure of freedom and quiet. Finally, at the age of thirty-five, I got married and moved to New Hampshire, and a couple of years later, purchased a house set back from the street on a tidal pond. Here, I found plenty of space for writing and dreaming.

I also found plenty of space for accumulating stuff. Before long, I was in possession of a collection of three hundred whimsical salt and pepper shakers picked up in my travels and in junk shops all over New England. My favorites are the tomato people with hauntingly human faces, and the little plastic 1950s televisions in consoles with spindly legs. Although, truth be told, these are just among my favorites, as I am incapable of choosing one set over another. In their oddness, I love them all.

Like many of the things I acquired once I remained in one place, the salt and peppers have come to encapsulate moments in my life—a trip to Florida when we drove the back roads and stopped in Frostproof; the time I stayed in a guesthouse in a small Iowa town and wandered its empty streets; Sunday afternoons when my husband and I searched used bookstores and antique shops for unexpected treasures. But it isn’t just that my collection reminds me of past experiences that has made the salt and peppers precious. Sitting on a shelf in the kitchen, they are talismans, keys that can unlock the secret of my past selves.

The objects we surround ourselves with become imbued with meanings that belie their decorative function. In those salt and pepper shakers, I see the hopes of a woman who still imagined most of her life as before her rather than behind her. They are visible expressions of a period when pursuing novelty and fun and plain old silliness was justification enough for any activity; when time and possibilities seemed limitless, unencumbered by planning for retirement and worrying about ninety-year-old parents.

When I walk through my house these days, my gaze moves over the familiar ob-jects that cover the tops of bookcases and tables without taking them in. Many have been there so long, they have been rendered invisible. If I force myself to look at the stuff I have surrounded myself with, though, including all those freakish salt and pepper shakers, the selves of earlier eras leap back to life and startle me with their vibrancy and strangeness. Was I really the person who once wanted these things, I wonder. And why did I want them?

At the age I have reached, almost sixty, I am no longer in acquiring mode. My husband and I don’t frequent used bookstores and junk shops the way once did. There’s no room left in the house we have occupied for twenty-three years. Yet it is more than a matter of space. Acquiring things is a way of stopping time, a way of saying I was here—and this no longer feels necessary to me.

I want to be in life now, not to hold on to objects that represent it. I want to own experiences more than things. Life and self are fluid, I have learned, and the greatest pleasures stem not from hanging on to moments, but being immersed in them and then letting them go. I don’t need the 1950s television salt and peppers to tell me who I am anymore.