This Lake Sunapee home is built for sustainability

In designing a home that would last well into retirement, a couple’s top priorities were energy efficiency, conservation of resources and comfort for their family.

Bill and Jane Hopwood had three primary concerns when they decided to build a home in the Lake Sunapee area: reducing energy use, producing their own energy and living comfortably. Protecting natural resources and saving energy is a way of life for Bill, who worked for more than twenty years in the renewable energy field. Through his experience with wind energy and photovoltaics (solar cells, panels or arrays that convert sunlight into electricity), Bill knew the advantages of incorporating this technology into his new home.

“I don’t believe any home is truly net zero (meaning all the energy that the home consumes is produced on-site via renewable resources),” Bill says. “But we were interested in producing our own energy while conserving what we don’t produce.”

A move to New Hampshire

The Hopwoods moved to New Hampshire from southwestern Pennsylvania, where they raised cattle and hay on 250 acres of rural farm land and lived in a circa 1830s, Greek Revival-style farmhouse. After twenty-five years, they decided to move, primarily due to noise and pollution created by one of the world’s largest underground coal mines that was located only eight miles from their home.

Fortunately, the hilly, wooded 3.6 acres they purchased on a New Hampshire lake in the mid-1990s had no such neighbors. A small, two-bedroom cottage on the property was used primarily for family vacations. Once their three children were grown, Bill and Jane decided to move to New Hampshire full time and hired architect Frank Anzalone of Frank Anzalone Associates in New London to design a home that would last the couple well into retirement.

The cottage on the property was taken down, and much of the structure was salvaged or recycled for other uses. Anzalone identified oak trees on the property that were removed during construction and used as flooring throughout the house. Designed to blend into its natural environment, the three-bedroom, three-bathroom (with three half-bathrooms) home is oriented to take advantage of lake views and maximize sunlight for energy use. Grading the property and installing rainwater gardens reduced the amount of unwanted water-runoff into the lake below.

Thanks to high-tech features—such as solar panels, cutting-edge heating systems and virtually air-tight construction—the red-cedar-shingled home produces between 70 percent and 80 percent of the electrical energy the Hopwoods use. “A tight house reduces its overall heating and cooling load,” says Michael Bruss, president of Bruss Construction in Bradford, who was hired by the Hopwoods to oversee construction.

Layers of high R-value insulation were sprayed and installed on all foundation walls, on the home’s exterior and interior walls and sides, in the stud cavities, as well as in the roof and rafter cavities. To ensure air circulation, an energy recovery ventilator (ERV) continuously replaces air inside the house with air from outside the house, reducing the need to open windows to let in fresh air. During this process, energy transfers from outgoing air to incoming air, cooling it in the summer and warming it in the winter.

When the Hopwoods are home, Bill—who prefers a local, renewable energy source to help heat the home—uses a wood-fired boiler, which stores heat in a 620-gallon tank for heating and domestic hot water use. The home’s other heat source (for hot water, cooking and running a clothes dryer) is an efficient, condensing-propane smart boiler. A radiant-heating system keeps the floors comfortably warm during cool weather. 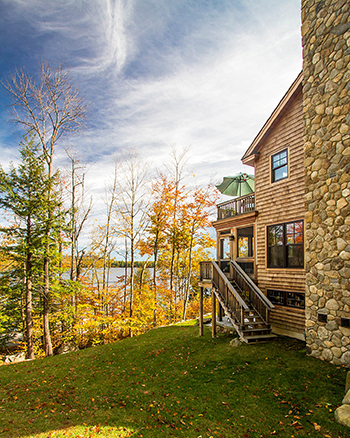 The three-story home features a deck off the upstairs master bedroom, a screened porch off the family room and easy access to the lake.

A five-kilowatt photovoltaic system on the roof carries 80 percent of the home’s electrical load. A solar thermal system powers an 80-gallon, solar hot-water system. A high-efficiency, propane hot-water unit is used for backup (as is a generator, during power outages).

Named an Energy Star Qualified home, the home has a HERS rating of 41, which means it’s 60 percent more energy-efficient than a standard new home (HERS stands for Home Efficiency Rating System, which is an index for measuring a home’s energy efficiency).

“The Hopwoods generate most of the electricity they use with this whole system,” Anzalone says. “It’s a sustainable home that’s very livable and attractive.”

While Bill’s focus was sustainability, Jane’s goal was making the home’s interiors comfortable and livable. A former weaver and an avid sewer, she wanted space for her own interests as well as living space for herself, Bill and their family, which includes five grandchildren. The home has three floors: the master bedroom suite is on the third floor; the second floor contains a guest room and the kitchen/dining/living room spaces; the ground floor has a sewing room, a family room, a guest room as well as access to a screened porch and stone patio. Bill’s office is over the garage in the back; stairs connect it to the main floor.

Jane directed most of her attention to the kitchen (“It's where I am 90 percent of the time,” she says) and communal living spaces. The bright, open kitchen, designed with Sue Booth of Vintage Kitchens in Concord, has red birch cabinetry (custom made and stained medium brown at Vintage Kitchen’s custom cabinetry shop) and natural stone tile floors. “Jane knew how she wanted her kitchen to flow so it was a good partnership,” Booth says. “We designed the kitchen based on how she works in the space.”

A large, granite-topped center island provides ample room for informal meals and can accommodate visiting grandchildren. A sitting room directly off the kitchen offers beautiful views of the lake and was originally designed with a glass wall to close off the space in winter. “But, I wanted to be able to use the room year round,” Jane says. “Now it’s one large room. Someone can be sitting on the loveseat reading a book while someone else is working in the kitchen.” There’s also access to a giant stone fireplace, one of five in the home.

Especially important to Jane was creating space for family heirlooms as well as her collection of watercolors and prints. The formal dining room was designed to accommodate a large square mirror (sixty-six inches on each side) that has belonged to Bill’s family for generations. Stained-glass windows from the Hopwoods’ home in Pennsylvania were restored as a gift from Anzalone and installed in doors leading from the master bedroom to the upstairs porch. Jane’s colorful collection of pottery and porcelain is displayed on fireplace mantels and along the top of the sitting room wall off the kitchen.

Several years after construction, the Hopwoods are happy with the results. In fact, everyone involved with the project is pleased.

“Having a ‘green’ home doesn't mean sacrificing comfort or livability,” Anzalone says. “This is a well-planned, high-performing home that should be around for many, many years.”