Tomie dePaola gets inspiration for his award-winning children’s books from the place where he lives and works. 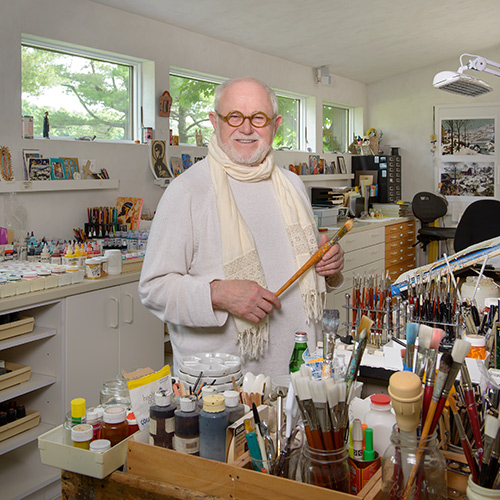 In his studio, dePaola says the shelves below the windows are for his “household gods of inspiration”—cards, small photos, tchotchkes, paints, brushes and other materials.

Although we’re encouraged to look beyond appearances and “not judge a book by its cover” (as Mr. Tulliver suggested in George Eliot’s The Mill on the Floss), I do otherwise when it comes to the works of author/illustrator Tomie dePaola. His books for children—he’s written and/or illustrated nearly 250, with more than 15 million sold worldwide—are just as fabulous inside as promised by their covers.

DePaola is a rock star in his field. In 1976, his Strega Nona received a Caldecott Honor Award and in 2000 26 Fairmount Avenue was given a John Newbery Honor Award. In 2011, a Laura Ingalls Wilder Medal recognized his ”substantial and lasting contribution to literature for children.” He was given the Smithsonian Institution’s Smithson Medal; was granted honorary doctoral degrees from University of Connecticut, Georgetown University and Pratt Institute, among other schools; and in 1999 received a Living Treasure Award from the New Hampshire State Council on the Arts.

And how fortunate for New Hampshire Home readers that dePaola lives in our state! When we visited him last summer, his home was welcoming, vibrant and magical—just like the places pictured in his books. In the courtyard, which joins his house and the two-hundred-year-old barn where he has his studio, are countless pots teeming with artfully arranged flowering plants. Just beyond are gardens putting on a spectacular show of summer blooms. Petunias in a pastel palette punctuate a long stone wall, while bright pink zinnias and daylilies the color of orange sherbet surround the turquoise front door that beckons you inside. There you enter another world, different from any house I’ve ever been in New England. This one is reminiscent of homes in New or old Mexico, with niches for folk-art, and lots of brightly colored paintings and other beautiful artworks. DePaola calls his home and studio a “dream come true,” a place he loves to be and one that inspires his work. 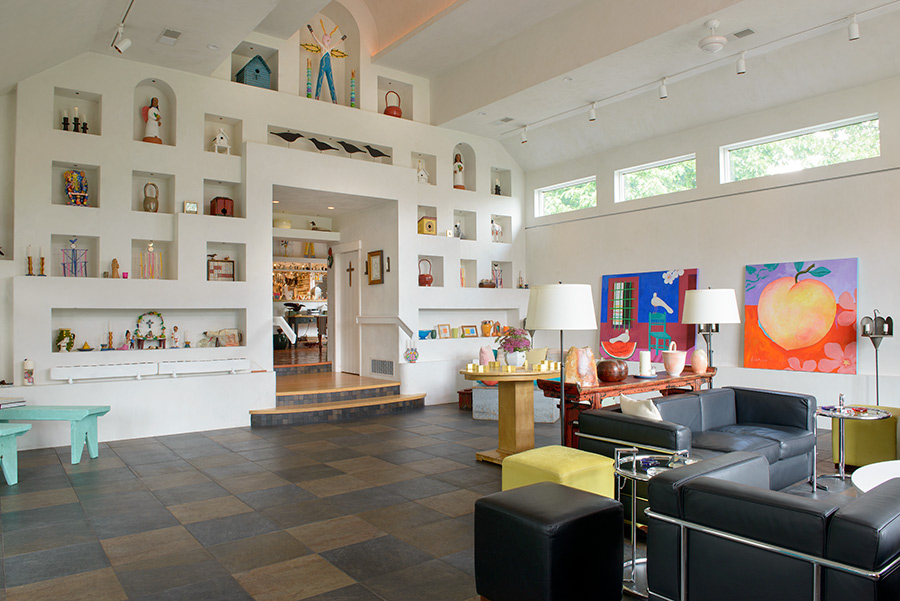 Tomie dePaola calls his grand living room “the Mercer Room,” after the chic New York City hotel. On the wall to the left are twenty-four niches for his favorite pieces of Mexican, early American and Native American folk art. On the adjacent wall are two of his paintings: Frida’s House—Casa Azul to the left and What a Peach! on the right. The table behind the sofa is a nineteenth-century Chinese tribute table, from Prospect Hill Antiques in Georges Mills. (Guests used tribute tables to leave gifts for their hosts.)

Recognizing the place one needs to be

Although dePaola was born in New England, he left Connecticut in 1952 to study illustration at the Pratt Institute in New York City and didn’t return to the area for almost twenty years. He initially lived at a priory in Weston, Vermont, and eventually made his way to Wilmot Flat, where he settled to teach at Colby-Sawyer College in New London. He was already an established illustrator and author, but he loved teaching theater. “Theater and illustrating are both so visual and go hand in hand,” he says. “You have to start and stop the story, select text, choose the cast and costumes, and design the set.” 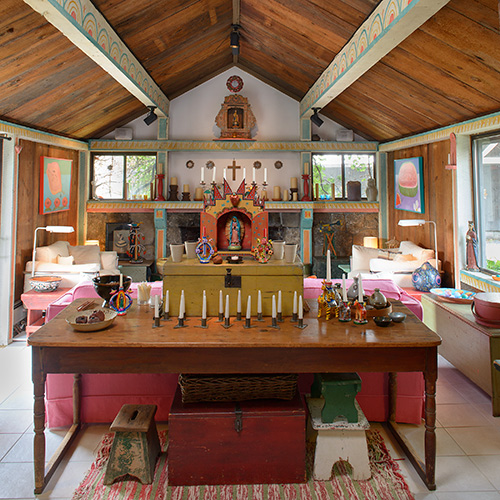 In “The Chapel” or sitting room, Tomie dePaola and a friend painted the beams to resemble ones he saw in a tiny church in northern Mexico, where every surface was hand-painted. DePaola says this is the most eclectic room in the house—Mexican folk art lives with Mies van der Rohe chairs, American antiques and a ’60s-era pink sofa from Design Research in Boston. The papaya painting on the left and the watermelon on the right are both by dePaola.

When his career took off after receiving the Caldecott Honor Award, he knew he wanted a bigger home, with more land and a larger studio. “As an artist, I always wanted the perfect place to work,” dePaola says. (When he was a child, his parents fixed up half the attic so he had a place to draw and paint; at Pratt, he lived in tight quarters in a brownstone and had to sit on his bed at his drawing table.) It was time to have the studio of his dreams, so he began looking at properties for sale.

He knew he hit the jackpot when visiting the New London property he now calls home. It was once part of a farm called Glengae, and the barn was built more than two hundred years ago by the Gay family for their cows.

In the late 1960s, Emil Hanslin bought Glengae and built a home for his family next to the barn. That home became the prototype for the company he founded, called Yankee Barn Homes; the barn housed the company’s visitor center. The home’s timber-frame design became such a success that, in 1973, Emil moved his company from its Falmouth, Massachusetts, headquarters to a larger facility in Grantham. He chose the location because it was near Eastman, a seasonal housing community around Eastman Lake in Grantham that Emil and his son Tony were developing with Dartmouth College, the Society for the Protection of New Hampshire Forests and others. After Emil’s death in 1987, Tony took over the company and sold it in 2011. 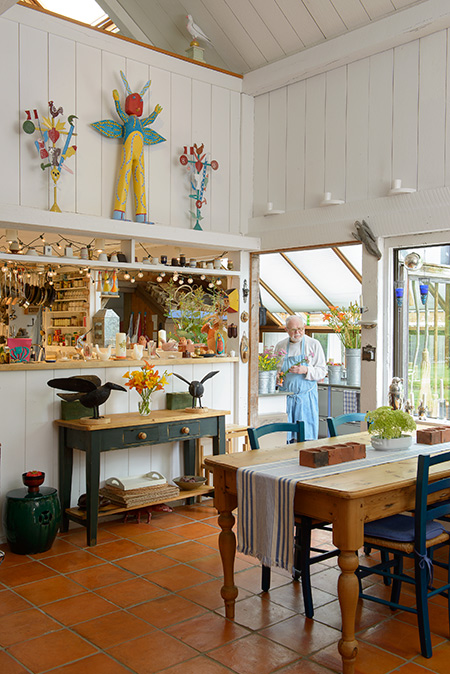 In the kitchen greenhouse, dePaola arranges flowers from his garden. Above the pass-through is a Navajo spirit figure surrounded by two Central American grave markers made of funnels and other found objects.

Yankee Barn Homes eventually moved its visitor center to Grantham, and the Hanslin family put the New London property on the market. DePaola became its second owner in 1985 because it offered everything he was looking for: a home with a spacious, open-concept design; lots of land, which he eventually bought; and a private and quiet property that is only minutes from the center of town.

DePaola says he “loved seeing the post-and-beam structure of the house, which echoes the design of the old barn.” To make the house his home, dePaola added beams in the ceiling of the living room off the kitchen to break up the space and painted all the walls white. “This reminded me of the priory in Vermont, whose white walls I thought were so beautiful,” dePaola says. When he redid the courtyard, he used granite cobble and bricks from nearby Lebanon. “The colors of the red brick and gray granite echo the colors of the landscape,”
he says.

DePaola says his sense of style is a “culmination of everything I’ve learned.” He believes that “white walls are the way to go, since everything stands out and looks good.” Several years ago, he saw a documentary about Ray and Charles Eames on PBS called The Architect and the Painter. “I loved how the Eameses mixed and matched furniture, placing a Le Corbusier chair next to an eighteenth-century chest, and realized that I didn’t want to live with just antiques or just mid-century pieces.”

In 2004, dePaola built an addition to the home, a grand space he calls “the Mercer Room,” named after the chic SoHo hotel that offers “loft living” instead of conventional hotel rooms. Spaces are roomy with lots of natural light—qualities that initially attracted artists to that part of New York and a perfect description of dePaola’s room in New London. The room is generous in size (nearly 1,400 square feet, with high ceilings), and a large window overlooks exquisite gardens. The seating area is furnished with Le Corbusier leather chairs, chrome-and-glass side tables, antiques and sleek lamps. DePaola’s large paintings in vibrant colors are displayed along the long side walls; on the wall facing the window are twenty-four niches, each home to fabulous pieces of colorful folk art.

DePaola says his love of folk art was nurtured by his twin cousins, Kathryn Abbe and Frances McLaughlin-Gill, who preceded him at Pratt. They went on to become professional magazine photographers, and urged dePaola to not go home to Connecticut on weekends but rather stay in New York; visit museums, galleries and restaurants; and get to know the city’s many neighborhoods. “They knew that living in New York was part of my education,” dePaola says. 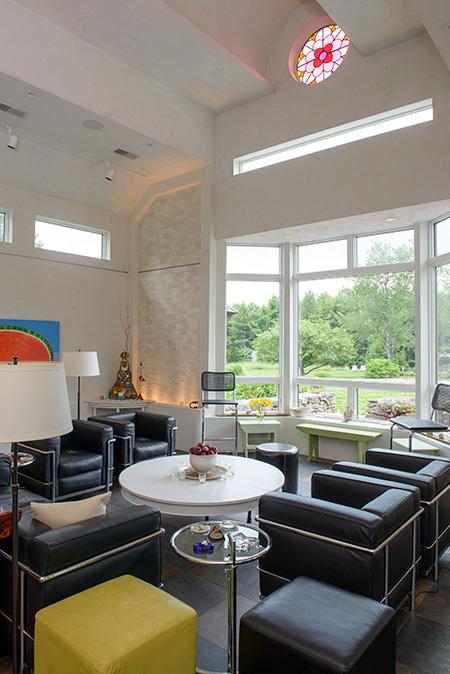 The Mercer Room looks out to the gardens and features leather Le Corbusier reproduction sofa and chairs from Design  Within Reach. The stained-glass window, called Homage à Matisse, was designed by Tomie dePaola and made by Jamie Morgan.

School gave dePaola a deeper appreciation of folk and primitive art, but he says he always had an eye for it. “When I’d go to Mexico to visit friends, I’d bring an extra empty suitcase,” he says. “The colors of everything were marvelous.” He didn’t buy one but rather twelve serapes, the colorful Mexican blanket-like shawls worn by men, which he now has stacked near a chest near his bedroom. In the kitchen is a tower of molcajetes, the lava-stone mortar and pestles used in Mexico to make guacamole. So many sculptures and figures are found throughout his house that one could easily mistake the building for a fine folk-art gallery. “I love having beautiful things to look at,” dePaola says.

DePaola said it took him about five years to figure out what to do with the barn. “It was big and dark at night, and it still had stalls for cows,” he says, laughing.

In 1990, he built an addition to the barn for workspace. “Its design is very Bauhaus,” he says, “since form follows function.” His spacious studio basks in artists’ favored north light, and is filled with paints and pencils in every color of the rainbow. Surfaces are bright white and free from clutter; all art supplies are perfectly organized to make finding anything easy and quick. “My studio is like a kitchen,” he says. “All these art supplies are my ingredients.”

Beyond the studio is the library. On one wall are floor-to-ceiling shelves for dePaola’s impressive collection of art books. On the opposite wall are niches displaying folk art. In the far corner, a chair faces an altar, where dePaola meditates every morning.

Although he celebrated his eightieth birthday in September, dePaola has no plans for slowing down. His newest book, Jack, was just published in September and tells the quintessential folktale of “Jack, an ‘every boy,’ who sets off on a journey and is eventually given a fixer-upper home by the king.” Next year, a treasury of six Strega Nona books is scheduled to be published to mark the series’ fortieth anniversary and dePaola’s receipt of the Caldecott Honor Award.

DePaola says he’s now working on a small book about gratefulness. “I love what I do, and I love going to bed at night knowing I’ve accomplished something that will be important to young people. I want them to see color and imagery, and fall in love with the pictures,” he says.

Retirement is a not word in dePaola’s vocabulary. “When I wake up, I can’t wait to go to work,” he says. 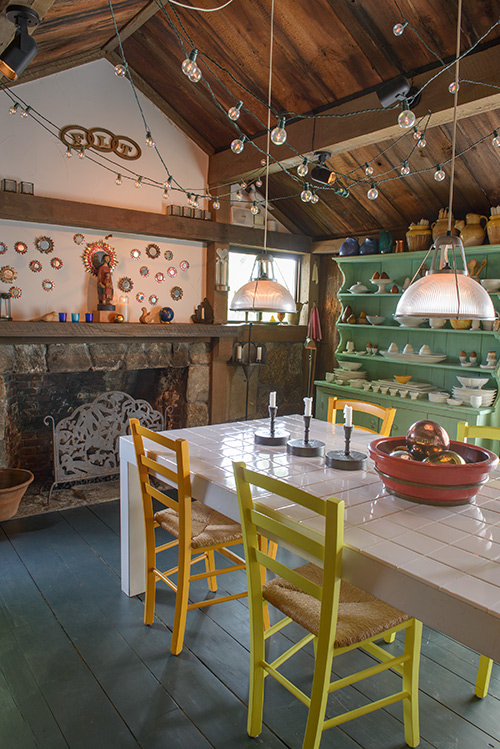 Tomie dePaola designed his dining room table with white ceramic tiles for a surface. The painted chairs are from Italy. The Madonna and Child figure was hand-carved in oak by Roland Coignard in the 1960s and is surrounded by Mexican tin ornaments. 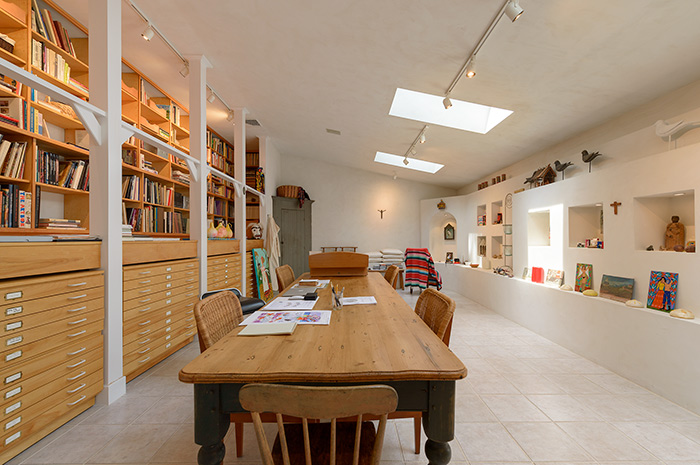 Tomie dePaola’s library is filled with volumes and volumes of art books, and has a long library table where he likes to do his research. He meditates every morning in the far right corner, in the chair with the Mexican serape over it. 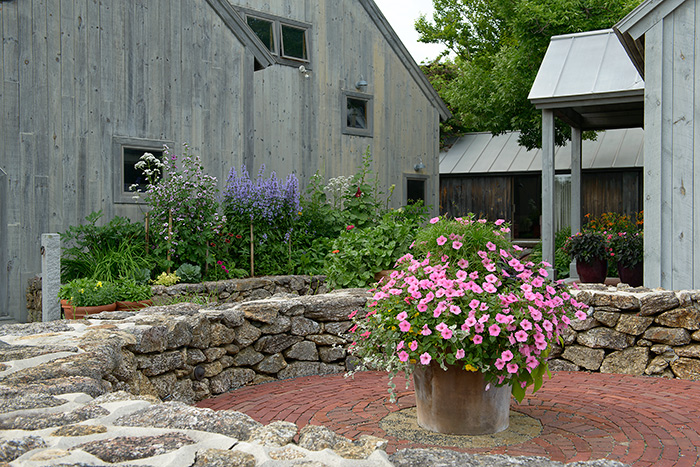 Gardens and pots, filled with colorful annuals and perennials, surround the house.