The family-friendly renovation by architect Lisa DeStefano of DeStefano Architects in Portsmouth won two NEW HAMPSHIRE HOME Design Awards in 2017—one for Excellence in Remodeling/Renovation and the other for Home of the Year. 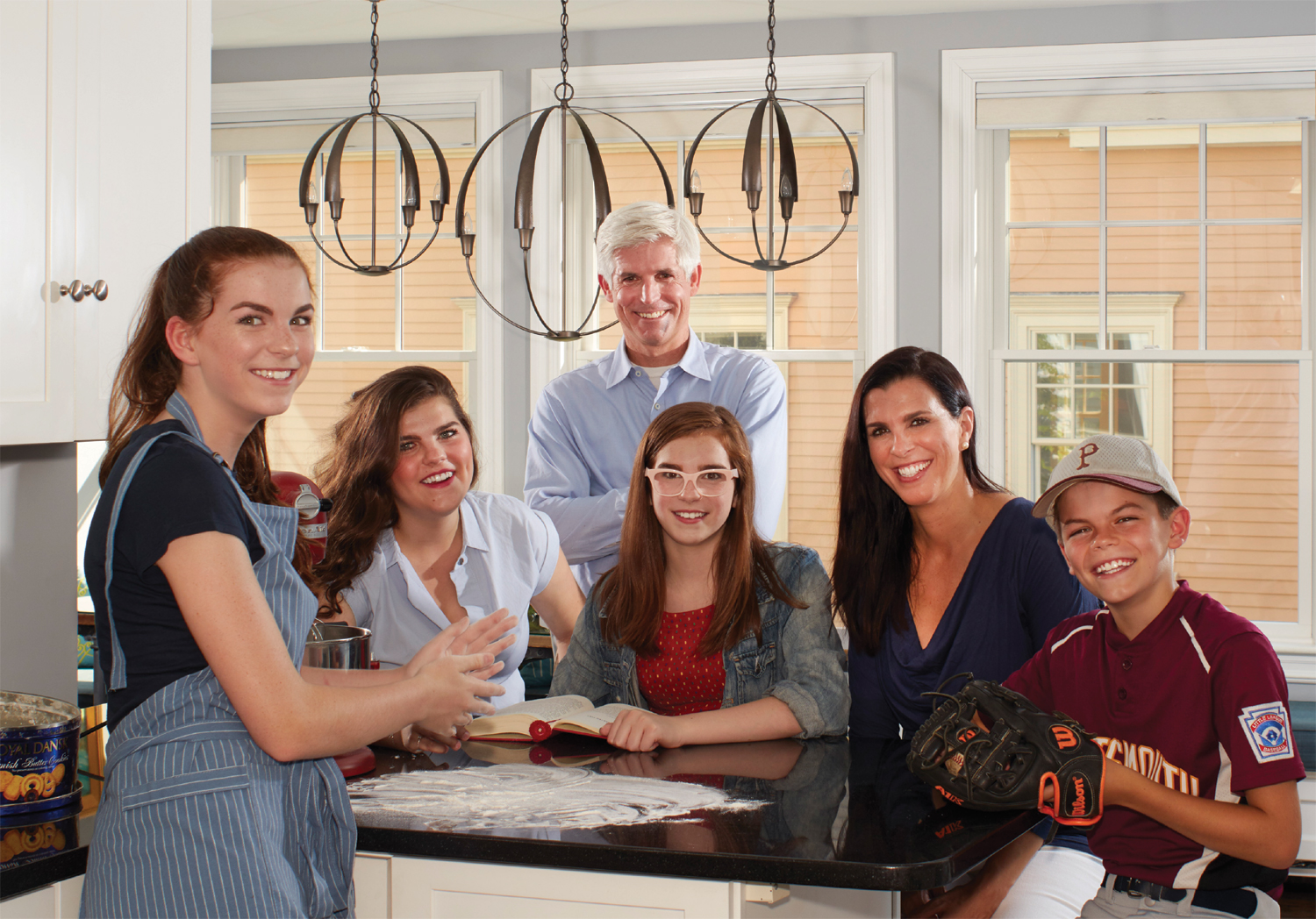 When Stefany Shaheen describes how she and her husband, Craig Welch, found their house on South Street in Portsmouth, she cites the children’s book The Best Nest. It’s the story of two nervous, new parent birds and their quest for the perfect place to raise a family.

“Ultimately, we were drawn to Portsmouth,” she recalls. “After all, we found ourselves driving there all the time for different activities. When we found the house on South Street, it seemed right, and we fell in love with the neighborhood. So, we made an offer.”

Even though Shaheen and Welch were unable to buy the house then, they waited. The couple were drawn to the neighborhood, in part, because they could walk from that home to the elementary and middle schools, the library, and nearby soccer and baseball fields. Not to mention the little playground directly across the street where, as it turned out, neighbors gathered around a makeshift water slide while a gaggle of kids played.

And so, when the house came on the market again, Shaheen and Welch bought it. 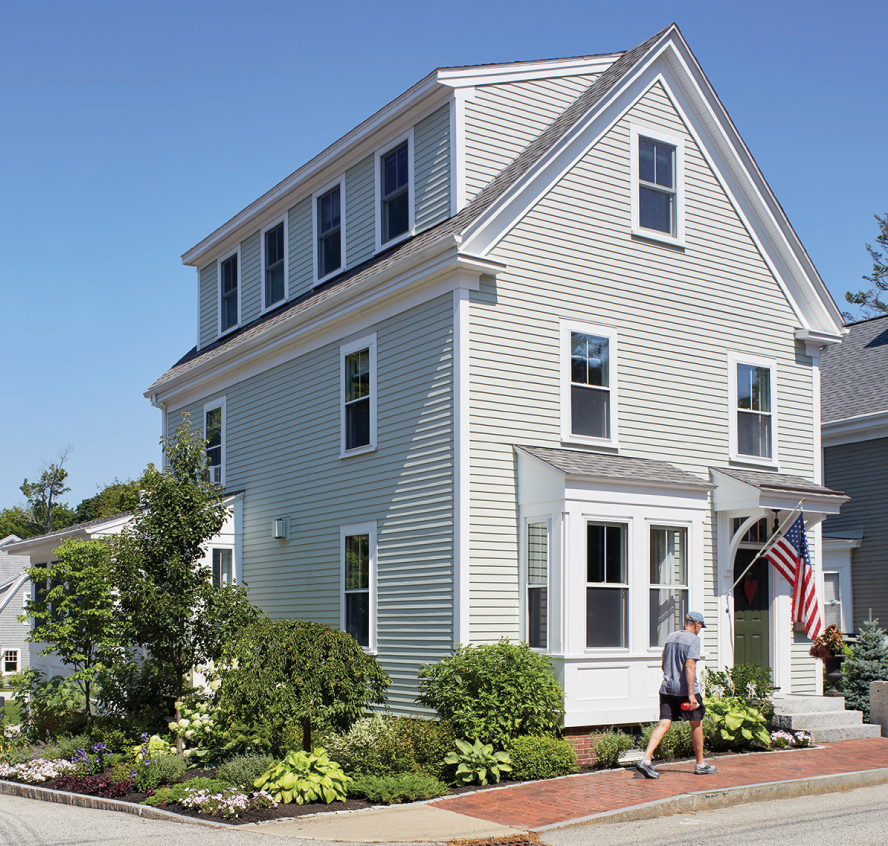 The street view of the home is basically the way it always has been. And that’s the idea when renovating in this historic Portsmouth neighborhood.

“When we moved in, I had just finished graduate school. Our youngest, William, learned to walk in the back yard,” Shaheen says. “Annah and Caraline were just beginning school, and Elle, our oldest, was halfway through second grade.”

When Elle was in third grade, she was diagnosed with Type 1 Diabetes. Eventually the family welcomed Coach, a medic-alert dog trained to detect changes in blood sugars, into their home. As time passed, with six very active people and a big white lab, it finally became time in 2014 to renovate the house.

DeStefano—who used to live in this historic neighborhood—describes it fondly, recalling the tidal mill pond and the sound of the trolley bell.

“The house was built for a specific era,” DeStefano says of this Greek Revival-style home that faces southeast and catches the morning sun. “Consequently, for today’s family, we had to make the most of every square inch. We also had to keep the house visually intact from its South Street perspective. Given the home’s unique location, we were required to submit our plans to three different boards for approval.”

Thanks to help from Amy Dutton of Amy Dutton Home in Kittery, Maine,  the new breakfast bay combines traditional design elements, such as historically proportioned windows and moldings, with a traditional yet modern chandelier. The effect is updated and fresh. Floral arrangements are by the Flower Kiosk in Portsmouth.

First of all, Shaheen and Welch wanted to have more connection with the outdoors. They also wanted a kitchen that could accommodate a busy family, quick meals and a place to do homework. Also on the couple’s wish list was a dining room with a table large enough for dinners and holiday celebrations with extended family. A small downstairs bath was another requirement.

Upstairs, modifications were needed for the master bedroom. A laundry room that could accommodate the bales of laundry from three teenage daughters and a baseball-loving son was a must.

“We gutted the downstairs,” DeStefano says. “Although, the main kitchen remained mostly intact.”

Key to the downstairs design was the addition of a carport at the back of the house. The carport supports a small deck that affords a panoramic view of South Mill Pond and provides cover for one car. It also has barn doors that slide open so that the space can double as a covered outdoor area.

There is a mudroom with cubbies for each family member, including Coach. Outside stairs access the deck, which is right off of the kitchen. This new living space means that grabbing fresh veggies from the side garden is easy. A storage space for trash is hidden neatly under the outside stairs.

An enclosed sun porch is now a breakfast bay where the family most often gathers. This transformation came together after some creative problem solving that involved expanding the existing interior staircase. A built-in bench now provides space-saving seating. New windows opened up the view to the back yard and let afternoon light spill in. The windows incorporate historically sensitive narrow muntins, which have an especially graceful aspect. Beebe installed all the windows and created the moldings. 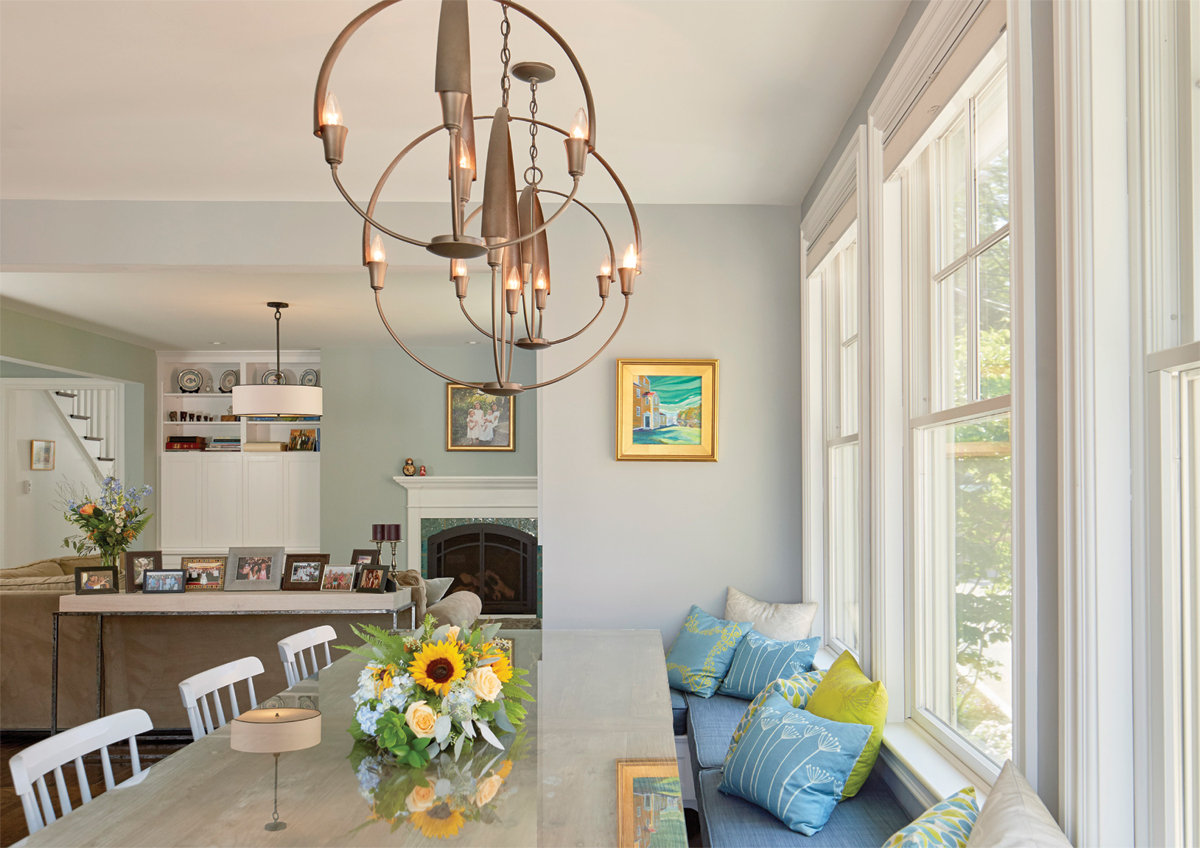 This view from the breakfast bay to the living room highlights the soft, sophisticated palette. Neighbor and artist
Oleg Kompasov’s cityscape painting provides a colorful touch.

To furnish the breakfast bay, Dutton worked with Shaheen to select textiles and furnishings, which are practical and beautiful for the high-traffic area. Shaheen chose a long modern harvest table, which has a quarter-inch glass top for easy clean up. For light, handcrafted chandeliers by Hubbardton Forge in Castleton, Vermont, were selected. “The chandelier design is traditional but with a modern twist,” Dutton says. The bench cushion fabric is by Mayer Fabric, a company with a long-standing commitment to sustainability that mills its textiles in the United States. The decorative cushions are covered in fabrics designed by Dutton. “I hand-draw the images, then straighten out the lines on the computer so they can be replicated and produced,” Dutton says. “I like to draw. And because Stefany likes blue, I played with blues and greens.”

The walls, a powdery blue-gray, give the room contrast and definition while the soft, lighter grays of the chairs and cushions bring everything together. For versatility when it comes to seating, Dutton says, simple chairs can’t be beat. Levellor shades tuck up to become almost invisible.

In the dining room, Dutton worked with Maine furniture designer Nathan Deyesso, artist and owner of DSO Creative Fabrication, to build a sixty-inch diameter table that seats the family. “It’s a rustic look,” Dutton says, “but it’s easy to clean.” The table’s, base was designed by Dutton.

Rugs in the dining room and living room are wool, flatweaves from Surya and Landry & Acari: Rugs and Carpeting respectively. Downstairs, the floors were re-done in Jacobean stain.

Woods found and, with his team, very carefully installed the slab of local granite that became the hearth for the gas fireplace. 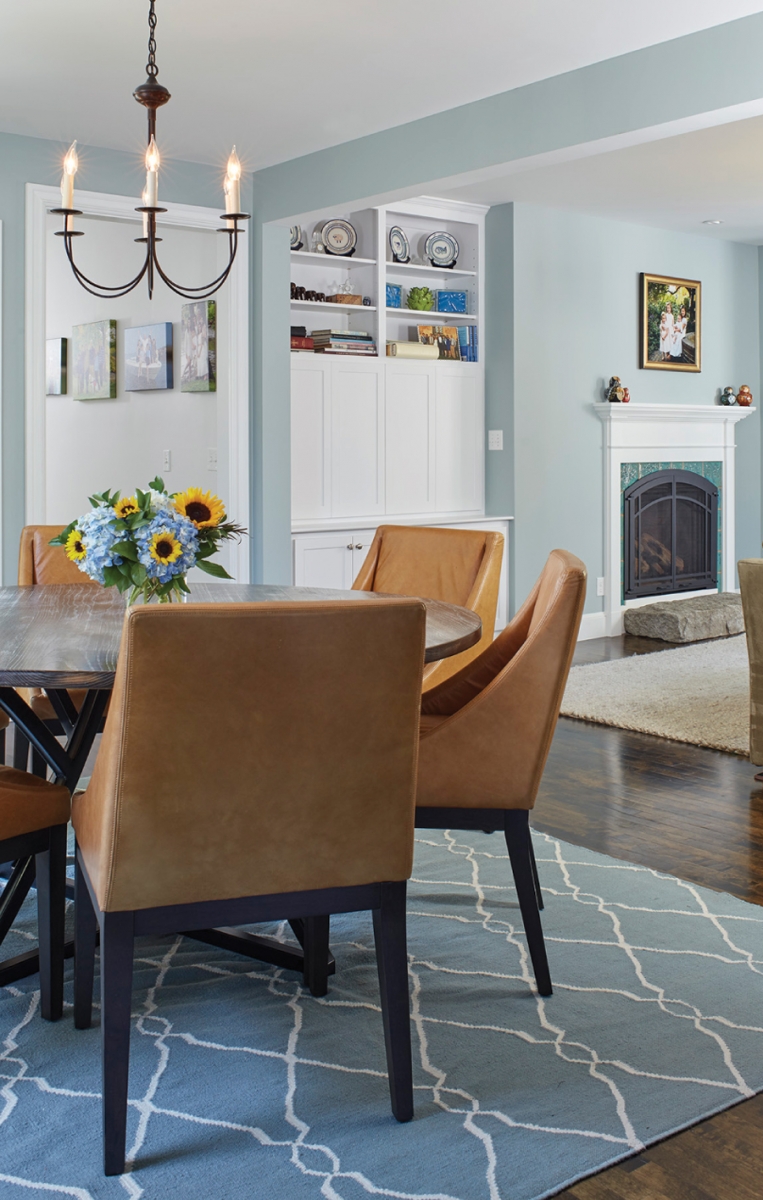 Sam Goodall, a local violin teacher and clay artist whose company is called Fjäril Designs, made tiles for the fireplace. “In the winter, a fire really does take the chill off,” Shaheen says, “and Sam’s beautiful work makes the fireplace much more fun to look at than the open closet that used to be there.”

Dutton, who often travels to do research for her work, has studied fabrics in India. That experience informed her inspiration for this South Street home. “Often Americans live in such big spaces,” Dutton says. “It can be challenging, yet very rewarding, to return to smaller spaces. I think we were all delighted with that space-saving bench in the breakfast bay.”

While working on the house, Beebe identified a spot for a small, second-floor deck off the master bedroom. Since it would not alter the visual appearance of the front, it worked. “It’s a nice, airy view up there,” Beebe says.

Portsmouth is known for its pretty doorways and pocket gardens. DeStefano and Beebe worked to create a simple, graceful entry. For the mail, Oleg Kompasov—a neighbor and artist—created a special, handcrafted mailbox replete with homing pigeon and letter.

DeGeorge—a childhood friend of Shaheen’s who is now based in Montpelier, Vermont—drew up a slew of landscape plans for immediate and long-term implementation. Shaheen and Welch “had very specific ideas that included a vegetable garden, fire pit down by the water, space to play volleyball, patio and sitting area, along with some nooks and teepees for the kids,” DeGeorge says. She and Shaheen also walked around the neighborhood, admiring plantings and gathering ideas.

To prepare the site and begin implementing plans for the yard, Site Structures Landscape filled in with soil and gravel as needed, and built all of the hardscapes. “We used locally sourced fieldstone where it was possible,” Woods says. “It always looks right.”

Site Structures Landscape moved the raised-bed vegetable garden down to the lower side of the house both for aesthetics and convenience. Existing plants were repurposed. To add year-round interest to the side garden with its wide expanse of blank wall, two pear trees were planted. “Pear trees grow quite tall, but they don’t get that wide,” DeGeorge says. “Most pear trees need a buddy to do well.” Other plants include hydrangeas, a dwarf weeping cherry, creeping juniper, catmint, bird’s nest spruce and dwarf conifers.

All of these small details resulted from thoughtful conversations along the way. As Beebe described it: “Craig and Stefany have such a gentle way of socializing and working with people. If there was an issue that needed to be solved, we’d have a huddle. It was a really enjoyable project.”

Since moving to South Street, this family’s life has been going full speed. Shaheen, with Mark Dagostino, wrote a New York Times best-selling book, Elle & Coach; founded a new company, Good Measures, to support others who have nutrition-sensitive medical conditions, such as diabetes; served on Portsmouth’s City Council; and continues to be a key spokesperson for her mother, U.S. Senator Jeanne Shaheen. Welch transitioned from being vice president of the New Hampshire Community Loan Fund to his current position as executive director of the Portsmouth Housing Authority. And the kids have busy lives as well. As Welch points out, “We really do use every square inch of our home.”

This past spring for Elle’s high school graduation party, the carport opened up for a buffet and a tent was connected. The back yard filled with longtime friends of all ages and, of course, lots of young people—many who just walked over from neighboring houses.

Now that the first in their family is preparing to head off to college, Shaheen and Welch feel hopeful that their beloved neighborhood will be calling Elle home as often as possible. As Shaheen says, “We will always have room in this nest.”

(Left): The back of the house was enlarged with a small carport and deck. The carport has barn doors that open up for summer
entertaining. The deck provides a view of South Mill Pond.
(Right): The master bedroom on the second floor now has a small private deck furnished with a hammock.
(Left): Everyone had input into design decisions. For example, William really likes baseball.
(Right): An efficient, small laundry room on the second floor was absolutely critical.
(Left): Many small touches create a welcoming collage, from the graceful supports on either side of the front door to granite steps, evergreen plantings, an American flag, a simple heart and an old-fashioned mailbox.
(Right): The design team includes, from the left, Ben Woods of Site Structures Landscape in Kittery, Maine; Amy Dutton of Amy Dutton Home in Kittery, Maine; Lisa DeStefano of DeStefano Architects in Portsmouth; and Sarla DeGeorge of DeGeorge Garden Design in Montpelier, Vermont.
(Left): The side garden has begun to mature. The two pear trees grow straight, but not wide, and offer year-round interest.
(Right): Everyone, even the dog, has his or her very own cubby in  the mudroom.
Categories: Architecture and Interiors