A top-to-bottom renovation preserves a home's private woodland setting not far from Peterborough but in a world of its own.

When it comes to real estate, location is everything-or so goes the conventional wisdom. This was certainly true for Bill and Cathy Duerig when they bought their Peterborough home twenty-four years ago. The two-thousand-square-foot Cape was only half-built, but the lot itself was ideal: seven acres of field and woodland, including a pond and stream, that is hidden from the road but only minutes from the shops and restaurants of downtown Peterborough.

From the very beginning, "I just loved the land," Bill says. The pond in back of the house was created by a fly-fishing club in the 1950s. These days the pond attracts otters, waterfowl and, occasionally, ospreys, who hit the water as they catch fish. At times, deer and other wildlife wander out of the woods.

The Duerigs finished the house and raised a family there, eventually increasing the total acreage to thirty. For many years, the house served as a center of activity for the Duerig kids and their friends. There were slumber parties in the basement and paddleboat excursions on the pond. It was one of those houses, Cathy says, where kids just congregated.

The neutral palette of the family room is balanced and enlivened by a bold and colorful work of art by Israeli-born artist Smadar Livne. Rose-colored accent pillows pick up colors in the painting.

After the children had grown and things had quieted down a bit, it seemed like time to make some updates. The Duerigs definitely didn't want to move from the location they loved so much, but they were ready to make big changes-a new kitchen and master bedroom; new and additional bathrooms; and many more changes throughout, including quarter-sawn oak floors from New England Forest Products in Greenfield. In fact, the Duerigs ended making so many modifications-with new electricity (including a whole-house stereo system), plumbing, as well as heating and air conditioning systems, in addition to the new layout-that the couple almost ended up with a "new" house.

"What we should have done was tear it down," Cathy says.

Their builder, John Stanek of John Stanek Custom Builders in Peterborough, agrees. "I had said early on that we ought to just bulldoze the place," he says. But there were emotional attachments, as this was where the family had grown up; and, as any home renovator knows, the scope of a project tends to be less apparent at the beginning than at the end.

That end result-a gray clapboard and stone Cape now expanded to three-thousand-plus square feet-is spacious and airy feeling inside. Warm colors-golds and buttery yellows, taupes and shades of beige-work with muted greens and reds that appear on painted cabinets, trim, upholstery and window treatments. Here and there are subtle flashes of richness and luxury that give the house its special character: iridescent tile in the powder room; rich fabrics; and upholstery accents.

The project began with finding a contractor, which wasn't difficult: Stanek, a well-known builder in the area, was also a family friend whose children had played with the Duerigs' kids. Stanek helped realize one of the most dramatic parts of the renovation: adding on to the existing floor plan to create a larger kitchen with two sections-a work area with a large island and a dining area. There is a recessed ceiling over the dining area, where four bay windows in a curved wall offer views of the pond. For other parts of the renovation, a screened-in porch became a sunroom; a basement playroom morphed into a "man cave"; and two-and-a half bathrooms were added. "The whole house was gutted," Cathy says.

All this took time. "It was a two-year, massive project," she says. Originally, the Duerigs lived in a trailer on the property, but as the cold weather set in, they (with their cats) moved into a rental property nearby. They spent about a year in the rental house before they could move back home again.

The interior design took on a life of its own as well. "We'd do one room and think we were done," says the Duerigs' designer Lisa Teague of Lisa Teague Studios in Portsmouth. "Then there would be another."

The Duerigs found Teague in the pages of the inaugural issue of New Hampshire Home, in an article about her former home. "I really liked her colors," Cathy says. 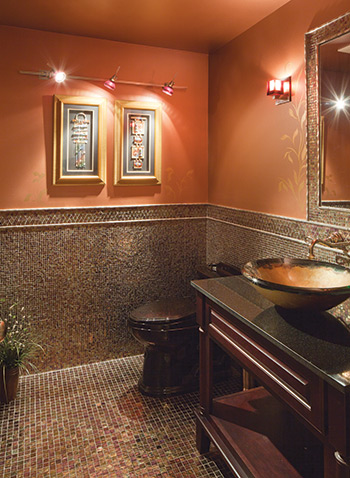 Teague was the first designer the Duerigs had worked with on a project this big, so she started with smaller tasks to determine their tastes. "She had tons of magazine tear sheets," Cathy says, "and I was supposed to go through them and set aside the ones I liked."

This helped Teague figure out commonalities. "People think they don't have a personal style, but everyone does," she says. One surprise was Cathy's tendency toward more formal design. "She still wanted a country home but with some sparkle," Teague says.

One of the most striking features of the new design is the use of tile (primarily from Upstairs Downstairs Tile in Acton, Massachusetts) in the kitchen and bathrooms. "Cathy is a tile person," Teague says. In the kitchen, a tile backdrop featuring a garland motif is a focal point. The master bathroom is a tour de force of tile, with the shower floor in a design of large blue and tan paisleys. In the section of the bathroom with the over-sized tub, tiny tiles cover the floor in a tromp d'oeil weave pattern, and they also run up the side of the tub to form a mosaic checkerboard. The aforementioned powder room uses purplish-copper iridescent tiles on the floor and walls that gleam with a dark luster.

The master bedroom took some cues from artwork. "Originally the master was going to be blue and white," Teague says. "But then they bought these beautiful paintings with a lot of pink in them." (The paintings are by Israeli-born artist Smadar Livne.) So Teague adjusted the palette to draw out the colors of the artwork, adding pink silk curtains with blue accents.

The kitchen redo not only made the room larger but also gave the space a completely new aesthetic. The former kitchen had "sort of a white-and-metal contemporary look with lots of hard surfaces," Cathy says. It was easy to keep clean and therefore quite practical when the kids were younger, but for this iteration she wanted something warmer and with more detail. The kitchen-with its buttery yellow-colored cabinets made by Gabriel Parker of Gabriel Parker Fine Woodwork in Harrisville-is her favorite new room, although it's nearly a tie with her walk-in closet area, which includes a washer and dryer as well as sewing area. A separate building with a stone fireplace, hot tub and outside deck is also a nice place to relax.

Although the Duerigs' house is a four-bedroom Cape, they don't use the three bedrooms upstairs very much. Their master bedroom is downstairs, as is the living space. "To us, it's one-floor living," says Cathy, laughing. 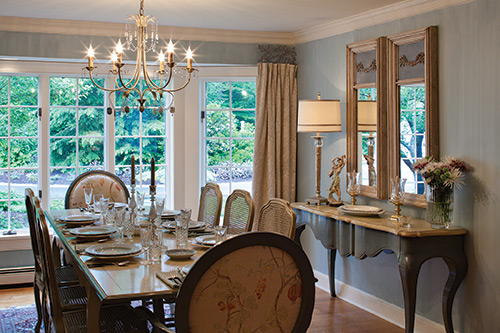 Bill's favorite room is the former basement playroom. The site of countless slumber parties is now his "man cave" with a pool table and large-screen TV. He also enjoys being outdoors. On a hill above the house is a five-acre field that he recently had cleared and enjoys mowing.

The landscaping around the house-designed by Chuck Simpson of Simpson Landscape Company in Dublin-includes Japanese dwarf maples imported from the Pacific Northwest, as well as hostas, impatiens, and various other varieties of trees and shrubs in different shades of green.

Despite the challenges of this renovation on a large scale, the Duerigs said there weren't many surprises, other than what most home renovators discover: the "price tag." The couple thoroughly enjoys their nearly new country home with its hints of restrained luxury.

Those details-the exquisite tile, trims and fastenings-are part of what made this project special, Teague says. "None of it was over the top; it was subtle little things," she says. For example, consider the living room curtains, which are made from a taupe linen overlaid with velvet designs. All-velvet curtains, or "puddles of velvet" as Teague puts it, would have been over the top in this particular room, but the contrasting fabric combination was just right for the setting-and the Duerigs' lifestyle. "It provided that bit of shine without being glitzy," Teague says.