A Franconia family finds joy in preserving and transforming the building traditions of early New England. 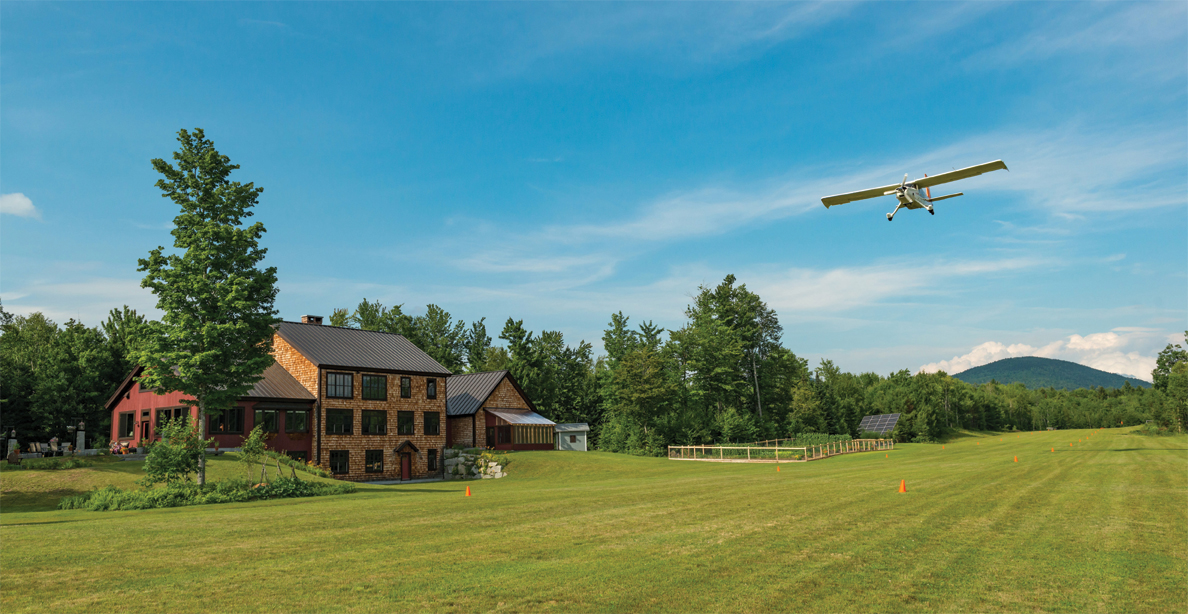 Thad and Joselle Presby’s home looks out on the eastern slopes of the rugged Franconia Range. Center stage, Mount Lafayette and Cannon Mountain etch the horizon, and below the Gale River sparkles down a narrow valley. Thad grew up skiing Cannon, and he discovered the long plateau for this home site while plowing driveways years ago for the family construction business.

It’s no surprise that Thad and his brother, Trevor, who lives next door, built a long, grassy airstrip before anything else. It’s a spectacular place for an airplane to take off and land, a hobby the brothers and their father, David Presby, enjoy.

No surprise either that for Thad and Joselle, their dream house was a barn. 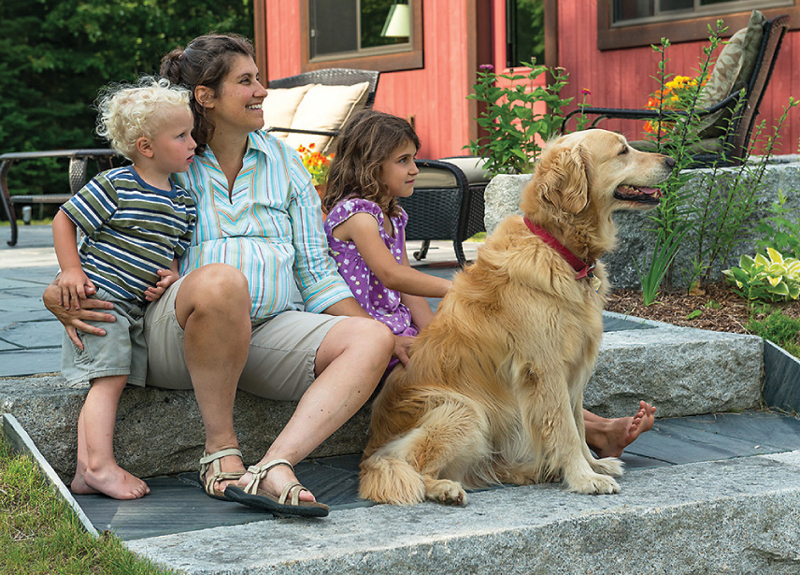 Andre, Joselle and Dena Marie Presby with Holly, the family dog, all watch as
Thad Presby’s father, David, flies in for a landing above.

“Thad’s great-grandparents Lester and Mary Presby had a farm in Bath,” Joselle says while she tends to her new baby, Nadea Rose. Thad and their four other children ramble about inside, then outside, come back in, fix a lunch plate from big pots of rice and stir fry on the stove, or snag an apple or pear to munch on. Joselle tracks the activity and says simply, “Presbys don’t stop moving. It’s just the way they are.”

What unfolds is a story about how, as a boy, Thad spent time with Lester on the farm, haying and maple sugaring. He would even ride a gentle bull named Humpty Dumpty, holding the bull’s big horns while his great-grandfather led it to pasture. When Aden (Thad and Joselle’s first child) was born in 2003, Mary, then in her nineties, had the pleasure of holding her great-great-grandson.

For sentimental reasons, Lester and Mary’s antique barn would have been the one for Thad and Joselle to transform into their home. But, barns are tricky. “The frame elevations of Lester and Mary’s barn just weren’t right for ceiling heights and a windowscape,” Thad says. “Barns were made for hay and animals, not people. You can’t make a house out of every barn.”

And so, the search began.

By chance, Thad found a great barn in a customer’s back yard in Lyman—not far from where his great-grandparents’ farm had been. The late eighteenth-century barn had massive, hand-hewn, white pine timbers with uniquely angular gunstock posts. It was likely one of the first structures built in Lyman, which was established in 1761. Nails are key to dating structures, and this barn’s “rosehead” nails were hand-wrought before circa 1800. The barn’s dimensions were typical of an early English barn in New England with a footprint of thirty feet by forty feet.

Unfortunately, water-damaged rafters and a missing tie beam limited the use of the structure. So, Thad continued his search. Online, he discovered a tall early nineteenth-century barn in New Sharon, Maine. He flew to New Sharon multiple times to inspect and measure the barn.

“Its rafters and primary roof purlins were connected with diagonal sawn hardwood braces, forming a diamond pattern along the roof—a nice structural and aesthetically pleasing detail,” Thad says. Given Thad and Joselle’s house site and the force of wind off the mountains, a strong structure was critical. Like the Lyman barn, the pegs for the New Sharon barn were mostly hardwood, but the nails were cut iron, circa 1790–1830.

Left: Furnishings from New Hampshire schools  in Monroe, Portsmouth, Manchester and Tilton were found for the schoolroom.

Right: The kitchen has old-fashioned functionality. The décor takes its cue from the barns—rustic and industrial, yet modern. Note the heft of those beams hewed from old-growth white pine more than two hundred years ago. The walls are plastered with American Clay; the color is Manchester.

In total, Thad looked at more than two hundred barns, both in person and online. With the Lyman and New Sharon barns as the most promising, Thad faced a decision on how to proceed. The answer? Combine the two barns.

Once purchased, Thad loaded the Lyman barn onto a trailer and drove it home to a big storage building. He then tagged all the pieces of the barn, made a map of them and disassembled the structure— a daunting task as old barns were incredibly well built. Barns took years to assemble—from felling and hewing all the timbers, to fashioning all the bits. In any given region, master builders and farmers built each barn in their own particular way.

Thad tagged and mapped the New Sharon barn as well. Luckily, its disassembly and delivery were included in the price.

Next, Thad gently washed all the beams and then treated each with a mild cleaning solution to get rid of any insects. There were adjustments. For example, the New Sharon barn’s posts were extended 2½ feet, while the Lyman barn’s were shortened by about 4 feet, thus allowing the barns to stand gable end to gable end. There was also some rot and porcupine damage, so repairs were made incorporating beams from other old barns as well.

“We had to hope the barns would actually fit on the foundation, since exact dimensions were impossible,” Thad says. “There was a lot of averaging and guessing, because old barn parts aren’t perfectly plumb or square.”

Right: Joselle Presby and her son Dane prepare a meal. In this kitchen, everyone helps out.

Meanwhile, Thad and Joselle faced the usual new homeowner questions—designing and fine-tuning the living spaces; deciding on décor and lighting; and so on. But first, the Presbys had to figure out how to heat the barns.

To begin, they bought and shipped ten thousand bricks reclaimed from an old factory in Lowell, Massachusetts, to Franconia. Mason Will Stone immediately got to work on the central, four-story-high, three-flue chimney. The three flues were tagged for an oil furnace/boiler, a wood stove for the first-floor basement and a masonry stove for the great room on the second floor.

“It took us ten weeks to build it,” Stone says, “with three people. We had plenty of concrete footings like you’d have for a skyscraper. It’s a serious amount of weight. But if you’ve built a hundred fireplaces, it’s pretty standard.”

As for the masonry stove, Stone says, “We built the chimney around a masonry heater core. I’m a fan of them. I always suggest them to clients.”

The builder for the masonry heater core, Erik Nilsen, lives in Dalton. He swears he’s retired, but clearly loves his craft. “I’ve built masonry stoves now for almost forty years,” he says. “The design I use originated in Finland.”

The masonry heater core is a bit like a pottery kiln with conduits to distribute heat to the chimney bricks. When the masonry stove is built with a fairly small wood box and then lit, it fires right up with temperatures inside exceeding 1500ºF. The centrally located chimney—from the second floor to the third floor—becomes quite hot within hours, heating the whole New Sharon barn portion of the house. Once the chimney cools down a bit, a small oven above the masonry stove’s wood box makes great bread and pizza, which Joselle bakes from scratch weekly.

The basement and bathrooms of the New Sharon barn as well as the kitchen in the Lyman barn have radiant heat under porcelain-tile flooring. The basement also has a small wood stove.

Strategically placed about the house are classic steam radiators, repurposed for hot water. “Each room has its own heat zone in order to cooperate with the masonry heater,” Thad says.

Additionally, solar panels on a tracker tower—designed and installed by Presby Construction Inc. in Franconia—provide electricity.

Of course, the structure is well insulated, and it has a standing seam metal roof.

Bottom line: inside the Presby home, the temperature is warm, even and delightful.

For the walls, Joselle worked with Jessica Greenblatt of Interiors Green in Bethlehem and chose American Clay Plaster for the kitchen and the great room. “It’s a great product. It absorbs moisture when the air is humid,” Joselle says. “When the air is dry, it releases moisture.”

All that, and the colors are earthy and rich. They even have a bit of sparkle due to marble aggregate in the mix. Greenblatt describes the application process as a bit like frosting a giant cake.

To fine-tune the kitchen design, Joselle worked with two designers from Crown Point Cabinetry in Claremont—Deb Foster, primarily, and then Melissa Bean. “Joselle had picked out all the specifics and knew exactly how she wanted to use everything,” Bean says. “The whole family works in the kitchen to help prepare dinner.”

Measuring for the cabinets took time since each beam has a unique size, width and depth. “We had to measure several times, using both a laser and a regular measuring tape,” Bean says. “The counter people had their work cut out for them!”

The cabinetry is a combination of wild cherry finished with Candlelight stain, and the main island is finished with burnished red and black milk paint. Crown Point’s skilled workforce does the milk-paint finish by hand.

The final result is a contemporary but old-fashioned working kitchen with soapstone counters; bulk storage for grains, rice, flours and beans; two refrigerators; two ranges (one commercial) housed in a brick alcove with a custom-made copper roof; a baking station that can be fitted with a plastic board for butchering livestock; a dishwasher; and two over-sized, custom-made copper sinks.

“We don’t use the dishwasher,” Joselle says. “At the end of the day, Thad and I do the dishes together. It’s when we talk.”

Elegant chandeliers and wall sconces from Hubbardton Forge provide light that is adjustable and mellow, and also proportional to the high barn ceilings.

Turn-of-the-century stained-glass win- dows Joselle found in small antique shops as well as pieces her mother made decades ago are found throughout the home.

As we talk, downstairs someone plays Scott Joplin’s The Entertainer on the piano. “Oh, that’s Dane,” Joselle says of her twelve-year-old son.

After hearing us talk about maple syrup, Aden comes in to show us a jar of rich, amber syrup the family made last spring. Today, he’s helping his dad work in the new sugarhouse. “This spring we’ll have to make Great-Grandma Mary’s doughnuts,” Joselle says. “She fried the dough in lard and then dipped them in maple syrup. So good.”

Left: Crown Point Cabinetry is featured throughout the home. Cabinets in the office (above), as in the kitchen, have wild cherry wood with Candlelight stain and Craftsman  pegged doors.

Right: A Hubbardton Forge chandelier lights the dining table, creating an intimate setting  and a dramatic statement. The great room’s walls are plastered with American Clay;  the color is Palmetto.

Left: Although Joselle claims to have a “greenish yellow” thumb, the garden looks great. Dena Marie and Andre pick greens for the table.

Right: The massive chimney warmed by a masonry stove radiates steady, gentle heat  throughout the barn from New Sharon, Maine.

Left: The children’s bathroom has dramatic purple tile to complement the cabinets’ wild-cherry wood with Cinnamon stain and Barnstead doors.

Left: The guest bathroom has maple cabinetry painted in a custom color and has Barnstead doors. The sconces are from Hubbardton Forge.

Right: Crown Point worked with Joselle Presby to create a powder-room sink countertop from her Singer sewing machine base. 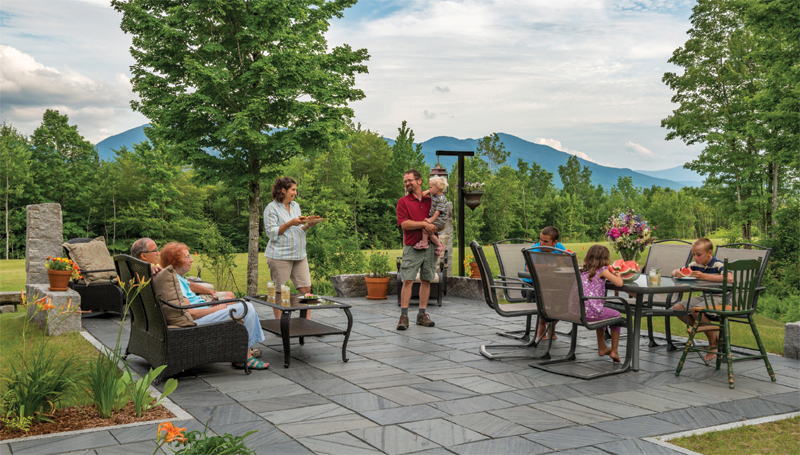 Getting together for a Presby family gathering on the patio were, from the left, Joseph and Joann Germano (Joselle’s parents), Joselle, Thad, Andre, Aden, Dena
Marie and Dane.