Lyons Family Nursery in Newbury specializes in exceptional, field-grown trees in a variety of sizes and colors. 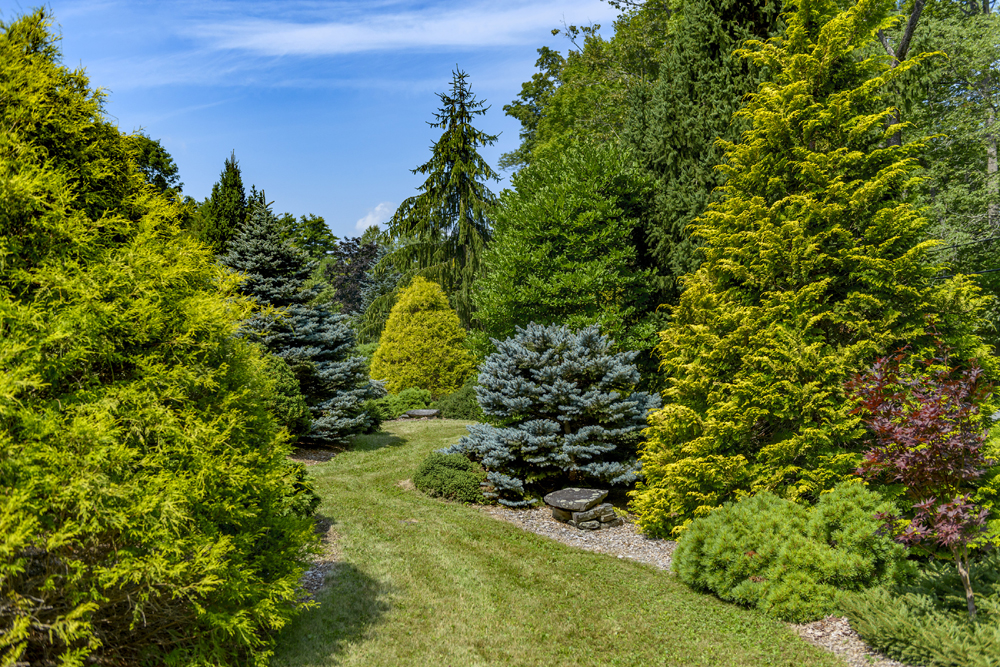 Branches on the tall weeping Norway spruce in the background usually tip up, but this year they are laden with cones. Gold thread-leaf false cypress provides a colorful contrast to the greens of the dwarf specimens ‘Horsford’ pine, ‘Elf’ pine and ‘Little Gem’ spruce.

John Lyons never intended to start a nursery. In 1978, he was a professor of business at New England College in Henniker. One of his former students—whose family owned a nursery and landscape business on Long Island, New York—was visiting the Lyons family that summer. Impressed with the land at the twenty-acre farm in Newbury, the friend suggested that John try growing some hemlock, saying that he would buy all they could grow. As such, the Lyons Family Nursery began.

“It evolved from there very quickly,” says John’s wife, Fran. “During the 1980s, there was a large real-estate growth period. Land was cleared, homes were built and people wanted plants for their empty landscapes. We met the need for young plants at a reasonable price.”

The nursery was a family affair, with John and Fran’s children pitching in to help. “They planted, harvested, watered, sheared Christmas trees, did sales and prepared landscape installations for customers. And weeded!” John says.

Fran worked full-time at the nursery from April to December. She was responsible for sales, daily plant care and promotion of the nursery. The flowering shrubs, trees and conifers the Lyonses grew flew out of the nursery every spring. “The nursery has put three kids and a horse through college,” Fran says, explaining that the horse was part of their daughter’s equestrian program at Mount Holyoke College. The hemlock they grew never made it to Long Island because they were needed here in New Hampshire.

As time passed, their children graduated, married and moved away, and Fran graduated from college and started a new career. John closed some of the nursery beds and decided to grow only the plants he loved. They still specialize in conifers, but also grow Japanese maples, along with broadleaf flowering evergreens, such as andromeda and mountain laurel. Some are grown from seed, but most of the nursery starters are purchased as cuttings, layers or grafts. John grows them in a shaded bed for the first year or two to reduce stress and get them acclimated. Then, he moves them to the growing area. Here, they are transplanted every two years, which gives them more space as they grow and encourages the plants to develop compact root systems.

“The beds are slightly raised for good drainage,” John says. Because of the clay subsoil, John doesn’t have any problems—even in a dry season. 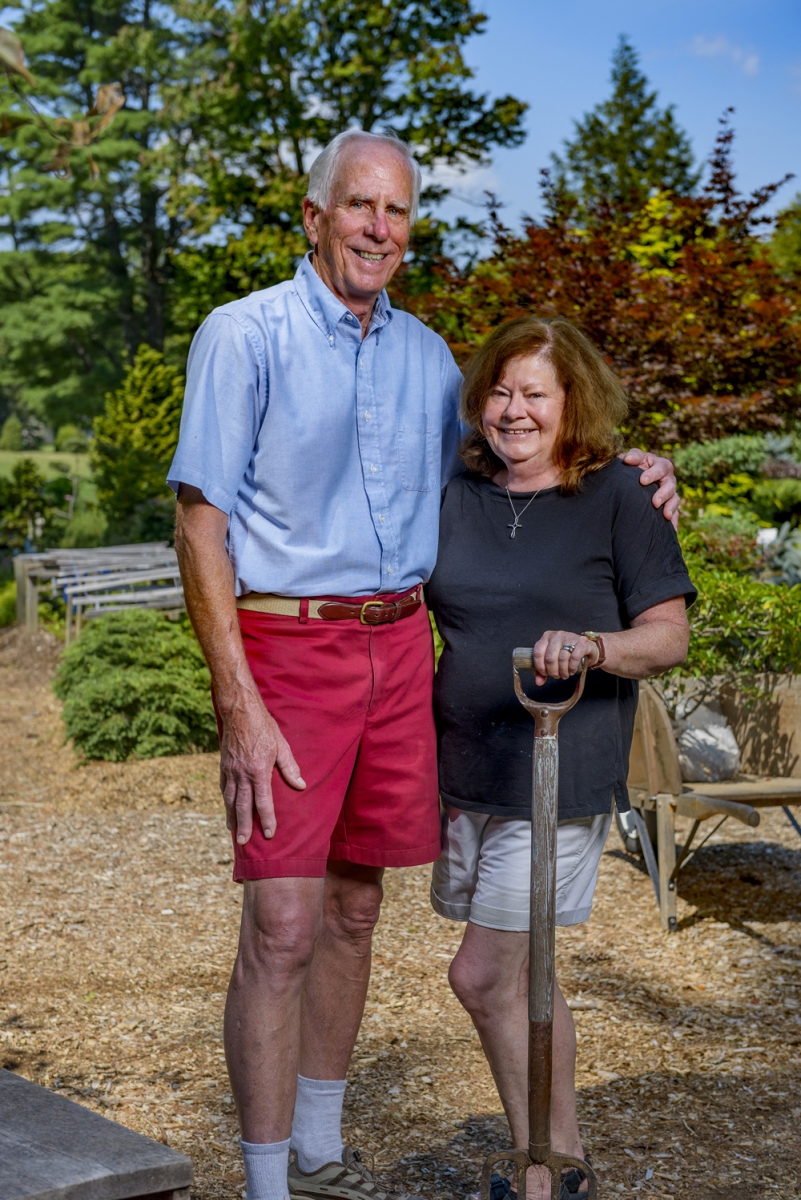 John and Fran Lyons have been growing unique conifers and high-quality nursery stock at their Newbury home
for almost forty years.

“A $5 plant deserves a $10 hole’ is a phrase that reminds us of the importance of soil preparation and site selection appropriate to the plant,” John says.

He recommends including a generous amount of organic matter mixed with native soil when planting. “Mulch will aid in water retention over the winter and during dry spells in summer,” he says.

He also suggests winter shade for sensitive conifers. “When the sun is lower in the winter sky, shade will benefit them.”

Conifers are extremely versatile plants, adding year-round interest, structure, color, fragrance and texture to your landscape. Some things to consider when choosing a new tree are your soil type, amount of sun in your location, size of the mature tree and if the tree will need protection from deer.

Conifers have many uses—as a ground cover, hedge, windbreak; in a rock garden; or as an elegant specimen tree. Conifers are excellent for attracting birds and other wildlife to your yard. The evergreen family is a large one with a wide range of sizes, colors, forms and textures so there is something for every situation and use.

Conifers may be called evergreens, but there are more colors than just green: gold, silver, blue, yellow, variegated, bronze and even white. Some change color during the course of the year, starting out one shade in the spring and changing as new growth occurs and matures over the season. Once established, conifers are low-maintenance plants.

Not all evergreens look like Christmas trees. Want to make a vertical statement? Try a columnar Norway spruce. Prefer a low grower? Go for a dwarf balsam fir or creeping juniper. Need a touch of drama? There are weeping forms to choose from, such as deciduous weeping larch, weeping Alaska cedar and ‘Goldenmop’ false cypress. Have a tough location? Some conifers, including weeping white spruce, are resistant to salt and damage from drying winds.

Still not sure what to grow or how large these plants will get? John has a display garden of his favorite dwarf and semi-dwarf evergreens. He calls them “friends I didn’t want to sell.”

This garden has matured into a breathtaking showpiece of mainly conifers. Most are now more than twenty-five years old so you can get an idea of their mature size, color, shape and texture. A wide, grass path loops through the garden, enabling visitors to see the trees from several angles. It is a visual feast of textural combinations and color contrasts. As you stroll the garden, be sure to read the poem that is posted in four parts along the path.

Around the grounds of the Lyons home, many more evergreens are artfully integrated into the landscape, if you are in need of extra inspiration. Plan to visit this spring; the nursery is open most days by appointment only so call ahead.

Top: A lovely landscape full of unusual evergreens and their companion plants awaits behind the eighteenth-century Cape the Lyonses call home.

Bottom: The entrance to the conifer garden is marked by smaller specimens (including dwarf weeping Norway spruce ‘Reflexa’ and creeping Norway spruce ‘Repens’) as well as ‘Gentsch’ white hemlock on the left side of the path with taller gold thread-leaf false-cypress and dark ‘Montgomery’ spruce on the right.

Left: Stone seats placed throughout the garden offer a spot to sit and contemplate the view. This one is flanked by a ‘Jeddaloh’ hemlock, ‘Little Gem’ spruce and white-tipped ‘Summer Snow’ hemlock.

Right: This statue is of the divine water goddess Dione, one of the Oceanides from Greek mythology. She is the mother of Aphrodite. 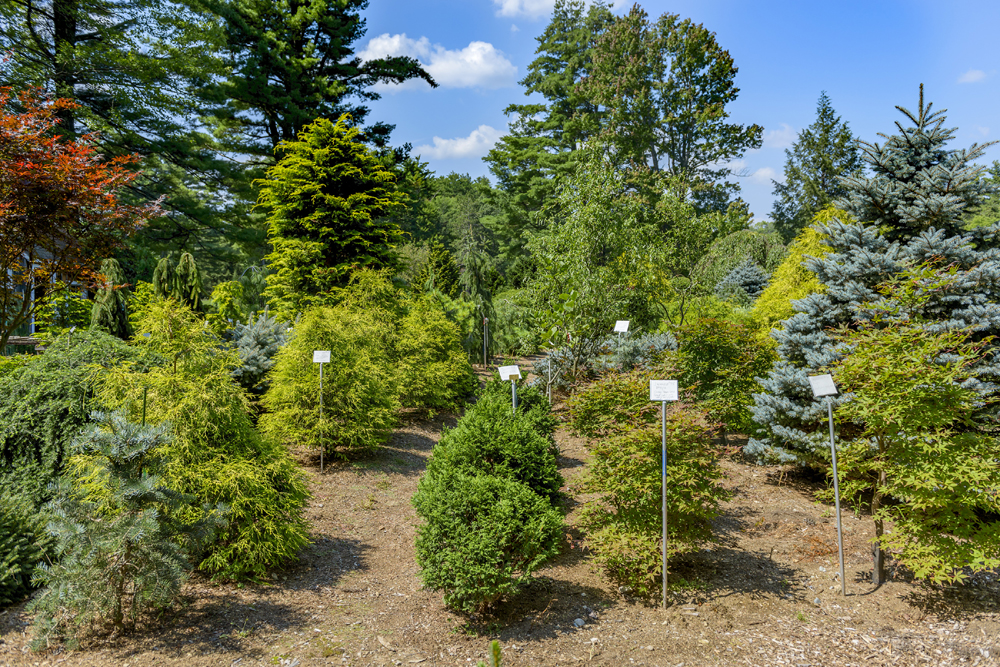 Skillfully cultivated and properly labeled, the trees in the nursery area stand ready to grace their new homes.

John Lyons has since retired from teaching but often used his nursery as a case study for students in his business classes. He founded the Business Research Center at New England College in Henniker. “Learning by doing, experiential education, is a great teacher as my students and my children found out,” he says. “Beginning in the 1970s, some students and I secured consulting-research contracts with local and national organizations. The students and I met with heads of the organization to develop a research plan, often involving a survey of customers. We charged a fee and the students split the profits. Local sponsors included banks, Velcro USA and many others.”

In 2016, New England College honored Lyons when they opened a new $9.5 million, energy-efficient academic center featuring classrooms, group study spaces, offices and seminar rooms called The John Lyons Center. “I was surprised and honored to have my name on the entry!” he says.