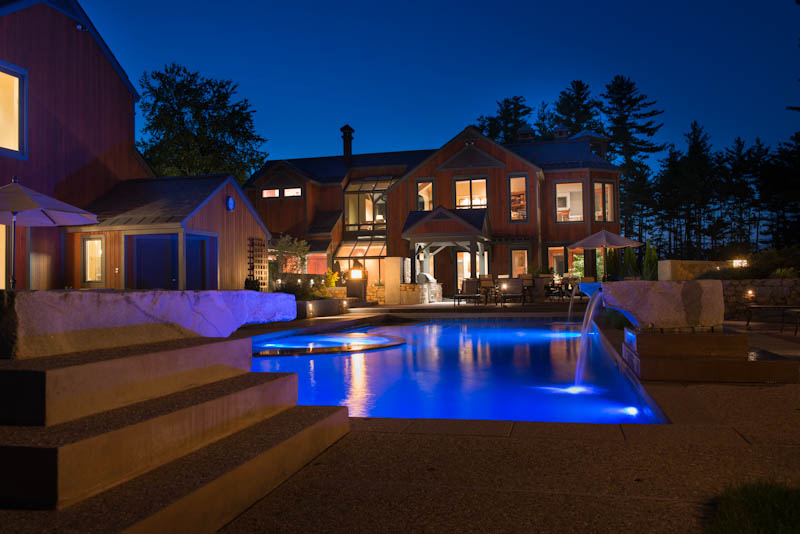 Homeowners Randy and Karen Shaw have updated the former Howard property in Bedford in a way that respects the talents of those who worked there for previous owners. “We still can’t believe we get to live in such a beautiful place,” Karen says.

When Randy and Karen Shaw toured the old Howard home in Bedford that had recently gone on the market, they were each drawn to different places. Randy headed right for the eleven-bay garage; Karen wanted to look inside the home. When they met again in the library surrounded by mahogany panels with insets of burled elm veneer, Karen had made it only through two rooms, but the couple had the same immediate reaction: “We have to buy this house!”

Three years later, Randy and Karen have led the effort to restore and update the iconic property to be one that honors the dreams of its original owner, reflects the lives of the Shaws themselves and is prepared for whoever might come next.

“Everything we’ve done,” Karen says, “has been done not just for us, but for the craftsmen who built the home and with the people who will follow us in mind.”

Known throughout the region for its imposing granite walls, the property began as the site of the dream home for Charlie Howard, a former director and first vice president of Thomson McKinnon Securities, Inc.

Howard reportedly spent upward of $5 million developing and building his Bedford dream home. From 1985 to 1987, he commissioned a main house of about 8,400 square feet; a guesthouse of about 3,000 square feet; three detached garages; a pool; a man-made, granite-lined pond; and a lighted, soft-surface tennis court. The house had every imaginable luxury, including an elevator; a wine cellar with a capacity of approximately 1,800 bottles; a bank vault that was built to withstand up to four hours of inferno temperatures; and a security system that was described as being “similar to the one in the White House,” according to a 1988 Manchester magazine article about the property.

“Charlie made clear his wish,” according to Manchester magazine. “He never wanted to walk into another house and see something he didn’t already have in his.”

Construction stopped in 1987 and the home’s second owner, Dr. Miam Ashraf, hired Milestone Engineering and Construction in Concord to finish the work. “The house was framed, drywalled and wired, and we did all the finish woodwork,” says Frank Lemay of Milestone.

As the fourth owners of the property, the Shaws have worked to preserve Howard’s desires—and the talent of those who originally worked on the property. In the decades since Howard first began work on his “dream house,” the buildings and landscaping had become rundown and were in need of restoration.

“What really got me,” Karen says, “is the craftsmanship. We’ve tried to bring it back to life without losing the integrity of the original dreams.”

To help, the Shaws turned to Cynthia Shreve, an interior designer with Goedecke Flooring and Design Center in Bedford. “The main house is a classic ’80s house with its recessed lighting and wood panels integrated into the ceiling, and its step-down kitchen,” Shreve says. “It was dated because you wouldn’t see these features now, but at the time it was actually very new and clever. So we wanted to keep the feeling but update it a little. The goal wasn’t to mimic the ’80s décor but to keep the architecture very clear. We wanted it to be elegant and warm, but not over the top.”

But basics had to come first. When the Shaws closed on the property, it needed cleaning and an overhaul of the mechanical systems. Not to mention, the restoration of all the woodwork in the main house that originally caught Karen’s eye. “All that beautiful wood,” Shreve says, “it all had to be sanded down and refinished. It took about a year to complete.”

From there, Shreve and the Shaws worked on surface updates throughout: all the walls were painted with new colors, new carpet was laid, wood doors were changed to glass to let more light in, and Shreve designed a stone tile for the solarium floor. “You see so much of the outdoors, I wanted to incorporate it inside,” Shreve says. (Goedecke’s was responsible for supplying and installing all the draperies; new flooring, including carpeting, tile and stone; as well as the glass and tile backsplashes in both the main and guest houses.)

In the kitchen, Karen and Randy agreed to keep the custom light fixture and the unique corner fireplace, but changed and expanded the cabinetry as well as installed new countertops and modern appliances.

That’s when Shreve turned to Denis Lamy, of Innovative Woodworking in Manchester, a custom shop that produces kitchen and other cabinetry, millwork and wine cellars. “The quality of the existing kitchen cabinets was not in keeping with the craftsmanship of the rest of the house,” Lamy says. “So Cynthia and I collaborated to create new cabinets that looked like they could have been there from the beginning.”

Lamy was able to reuse the existing drawer fronts, which were made from a rare, quarter-sawn bubinga wood. Following direction from Shreve and the Shaws, Lamy then picked up the color and grain from the satinwood inlay in the kitchen floor and produced new cabinets made from European beech. In the adjacent bar area, Lamy used South American mahogany, which was originally used throughout the house.

Karen, Randy and Shreve also rethought the use of the rooms: adding a second bedroom upstairs, changing a billiards room to a living room and adding an upstairs breakfast nook.

Throughout the goal was to create a house that stayed true to its origins but make it more in line with today’s needs. “We really wanted the house to have a warm feel,” Shreve says. “Even though it’s big, it feels like a home.”

Just as Howard had before them (Manchester magazine cites him as having spent $1 million in landscaping on the property), Karen and Randy gave close attention to the exterior of the property.

One of the first projects was determining a way to better connect the main house with the guesthouse, where the Shaws’ now-adult children have called home base.

Like the majority of the landscaping projects, the basis for the work was granite—all repurposed from elsewhere on the property, most notably the six-hundred-ton granite wall that surrounded the estate. The wall was built of dozens of granite blocks that each measured nine feet high, by two feet wide and two feet deep. Each block weighed between two and three tons.

“From the beginning, the Shaws didn’t want the fortress feel that wall created,” says Douglas R. Miller, a landscape architect with Landesign, LLC in Harrisville.

“We took down the wall layer by layer over the course of a year or so as we needed to use the granite for other projects,” Randy says. “Eventually, we replaced the center section using the same granite pieces, but standing them vertically (as opposed to laying horizontally) and put decorative fencing between the posts.” (On either side of the driveway gates, the original wall remains as is was when Howard had it installed.)

A good portion of the repurposed wall granite was used to redesign the pool area. When the Shaws moved in, the pool was oriented in an east-west direction. They wanted to better integrate it with the main house and create an oasis area, which now features a fifty-two-foot pool, a built-in hot tub, two hand-carved granite “scuppers” that spill into the pool, a fire pit, and bar and grill area—all of which was designed by Miller, and built and installed by Water’s Edge Landscape Associates.

As part of the redesign, Miller reoriented the pool to be north-south and parallel with the guest house. Doing so required tearing out the existing pool. “That concrete pool was pretty solid,” Miller says. “We dropped a three- or four-ton boulder on the concrete to try to get it to break up, but it just bounced off. We used an excavator the size of a house, and it finally gave way.”

It took the spring and summer months to complete the project, which included adding colored plaster with pieces of shell to the pool, giving the water extra sparkle; in-wall lighting; and a granite “diving board.”

“Randy keeps thinking of ways to use the granite on the property,” Miller says. “He came up with using granite for the diving board. We knew a regular diving board just wouldn’t look right. We thought about using a big boulder—I like the organic look of things like that, organic yet functional ideas. But in the end, we went with the granite.”

Karen remembers how the discussion played out. “One of our sons was a physics major at the time. So we called him and said, ‘If the board is so high, and you jump so high, how deep does the pool need to be?’ He called us back a few minutes later with the answer.”

The area was completed with a unique S-shaped fire pit, elevated above the pool area. “I like to think in shapes,” Miller says. “A traditional, round fire pit didn’t work in that area. This shape gives it some excitement.”

Three years after buying the property, the Shaws say the project is still in progress—although mostly complete. The guesthouse has been completely renovated (“the main house represented the best of the ’80s,” Shreve says, “and the guesthouse was the opposite”). And now, Randy and Karen are debating what they want to do next: deciding how to use the space that’s currently a tennis court, updating a bathroom upstairs or bringing a neglected man-made pond back to life.

But no matter how it comes together, Karen and Randy are looking forward to seeing the results. “We’ve been married for thirty-two years,” Karen says. “And when we first got married, we’d sit on our tiny front porch, in our brown plastic chairs, eating Cheez-Its and drinking a beer, and talking about what our next house would look like. We enjoy the process and get excited about the progress.”