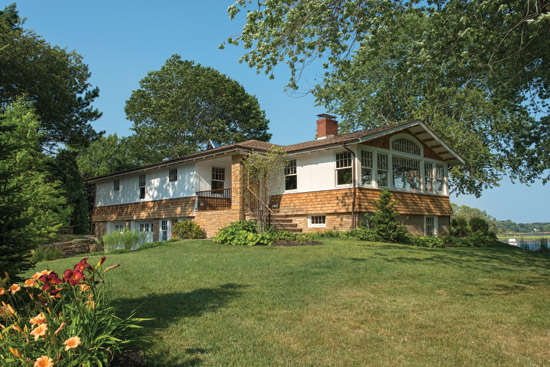 Built in 1958, Jay McSharry’s home, a classic ranch, was likely selected from a book of house plans. The flagstone walkway, stairs and front entrance as well as the roof and overhangs are original to the home. A two-car garage was carved out of the home’s northwest side; new windows open up the south side of the home, allowing for plenty of sun.

Restaurateur Jay McSharry knows promising real estate when he sees it. Owner of Portsmouth restaurants Jumpin’ Jays Fish Café, Moxy, The Red Door and Dos Amigos Burritos, McSharry has bought and sold area real estate for years. So his priorities were clear when he started searching for a new home: a comfortable, low-maintenance house with ample space for entertaining.

In 2010, he found it: a 1958 ranch-style home overlooking the Piscataqua River. “I could see the potential when I bought the house,” McSharry says. Owned by one family for twenty years, the dark brown, shingled structure was outdated but was home for at least a year before McSharry tackled a complete interior renovation. With the assistance of residential designer Brendan McNamara and a team of craftspeople who had worked with McSharry on numerous Seacoast-area restaurant and commercial projects, the single-story ranch was transformed into an elegant home with many original 1950s details and a modern sensibility.

A home from a plan book

McSharry’s home is a classic ranch, McNamara says. Developed for family living, ranch homes symbolized America’s growth and modernity. The single-story, low-slung style helped make the ranch into the most popular dwelling constructed in American suburbs from the 1940s to the 1970s. With large windows and wide-open living spaces, the ranch style appealed to returning World War II soldiers seeking affordable housing for their families. “The ranch home was derived from the 1920s bungalow style,” McNamara says. “The idea was to have single-floor living.”

Likely selected from a 1950s-era book of house plans, McSharry’s home retains many original details, such as the flagstone walkway and front stairs; honey-colored oak floors; a low-pitched gable roof; deep-set eaves; and an attached garage. A complete renovation of the interior, however, upgraded and increased the square footage of living spaces. Rooms and views opened up with the addition of windows along the home’s back and south-facing sides. Without increasing the building’s footprint, McNamara excavated under the west side of the house, where he relocated the two-car garage; the former garage space, which faces south, is now a guest room. Upstairs, walls were removed, windows replaced, and floors sanded and refinished—all updating the home and integrating it with its water view.

“Because its design was from a plan book, the home had nothing to do with the water view out back,” McNamara says. “The original design was more about how the house looked from the street. With the home’s view and south-facing orientation, we knew we could transform it.”

The 2,300-square-foot home has two front entrances.
Downstairs, near the garage, a door accesses a mudroom, media room and guest bedroom. Upstairs, the main entry opens directly into the heart of the home: a bright, open-concept living room, dining area and expansive kitchen, as well as a covered deck off the back. “The house is organized for entertaining,” McSharry says.

Diane Hart, of Diane Hart Designs in Kittery Point, Maine, helped select colors as well as furnishings and accessories. The living room—brightened by a cathedral ceiling—is decorated in soft shades of orange, beige, gold and red. Its furnishings are primarily pieces McSharry already owned as well as others selected by Hart. The 1950s-era Dunhill sofa was purchased by McSharry at auction, and covered in an orange and gold textural fabric by Donghia (and is a favorite sleeping spot for McSharry’s dog, Hattie).

Local artists created the pieces hanging throughout the room and the remainder of the house. A large, brick fireplace—original to the home—separates the living space from the dining area. Both rooms, Hart says, reflect McSharry’s straightforward style. “Jay has a really good sense of design,” she says. “He enjoys a variety of styles, but he likes quality and wants to honor local craftspeople without going overboard.”

Directly off the dining area is an expansive kitchen and bar area that overlooks the back yard and a dock extending into the Piscataqua River. A long, gray-green concrete island by Zenstoneworks doubles as a bar top; guests can sit comfortably at the island while watching meal preparation (McSharry often brings Marty Rumley, executive chef at Jumpin’ Jays Fish Café, to prepare meals for dinner parties). The kitchen’s warmth is enhanced by veneered, Douglas fir cabinets by A. Wilson Designs in Lee; cool, gray-green glass tiles line the wall underneath the cabinets and along the island. A large pantry behind the kitchen offers extra storage space.

The entertaining space extends outside to a covered porch, which is accessed via French doors in the kitchen. Originally a three-season porch with sliding glass doors on three sides, the space was redesigned by McNamara and turned into a covered deck, with steps leading down to the yard for easy outdoor entertaining.

Off the kitchen is the master bedroom suite, which McNamara created by combining two of the original bedrooms. The result is a larger sleeping space, a spacious walk-in closet and a master bath with two sinks. Located on the home’s northeast side, the bedroom gets plenty of sun and water views, thanks to large windows.

Energy-efficiency was important to McSharry. Spray-foam insulation was used in the walls and attic; two solar panels on the roof heat the home’s water (several years ago, McSharry installed similar panels on the roof of Jumpin’ Jay’s, noting that it “made sense financially” to use solar power to heat the restaurant’s water).

Although he travels frequently, McSharry enjoys coming home to relax and entertain friends. His investment has clearly paid off.