What you should know about lighting and LEDs

When it comes to using LEDs, the home of the future is here. 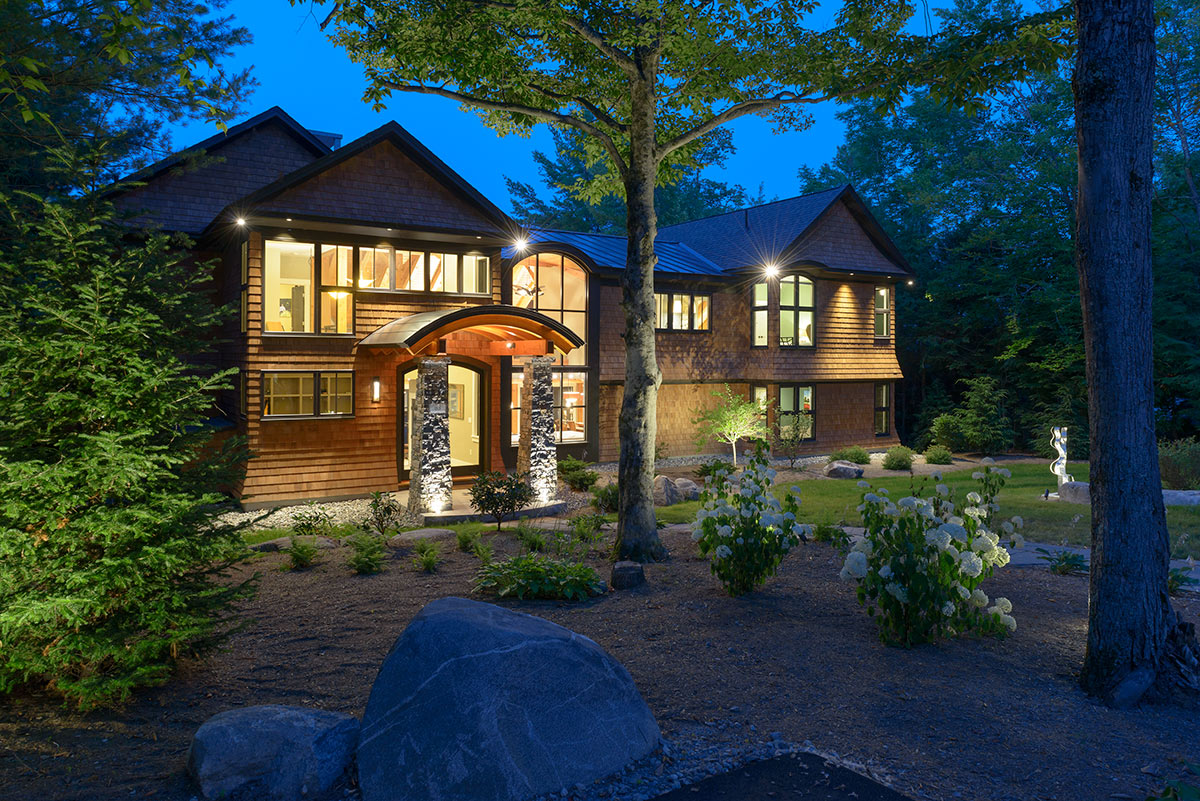 When building a new home, the architect, landscape architect and homeowner need to discuss lighting plans early in the construction process since many utilities are placed underground. In this home designed by Jeremy Bonin of Bonin Architects & Associates, PLLC in New London, exterior lighting, landscape and walkway lighting are all incorporated seamlessly.

“Light defines space,” says architect Chris Williams of Christopher P. Williams Architects, PLLC in Meredith. “It enhances shape and mood. How you light a room for a party differs from the way you’d light it for a couple sitting in their dining room to eat a meal. Outside, lighting is really important, too. The moonlight effects can be really wonderful. By a lake, you want those lights to be very low so they don’t intrude on one’s experience.”

For Williams, a conversation about design always centers on the human experience. What are people doing in this setting? Reading? Making dinner? Working at a desk?

Choices abound, and architects and designers now have even more options for lighting, thanks to LEDs (light-emitting diodes). Once an expensive alternative to conventional lighting, LEDs have come a long way in the past few years. What’s more, they offer two substantial benefits over conventional lighting: their cost of operation is significantly less and bulbs last for tens of thousands of hours. This is good news for homeowners who have hard-to-reach bulbs in chandeliers, recessed lighting in ceilings and clerestory sconces.

In new home construction, LEDs can be incorporated in the design right from the get-go. Architect Jeremy Bonin notes, “LEDs consume substantially less electricity than other options and produce less heat.

“This results in lower utility bills. LEDs are becoming the most logical choice. Demand is increasing research and development, and with that, the selection of color temperatures and bulb options is increasing. An all-LED home is possible and, most important, comfortable.”

One homeowner, who completed a new house working with Bonin, used LED lights throughout. She wrote: “When first introduced to LED bulbs, I approached this knowing I was buying one bulb per fixture for the rest of my life. Pretty cool! 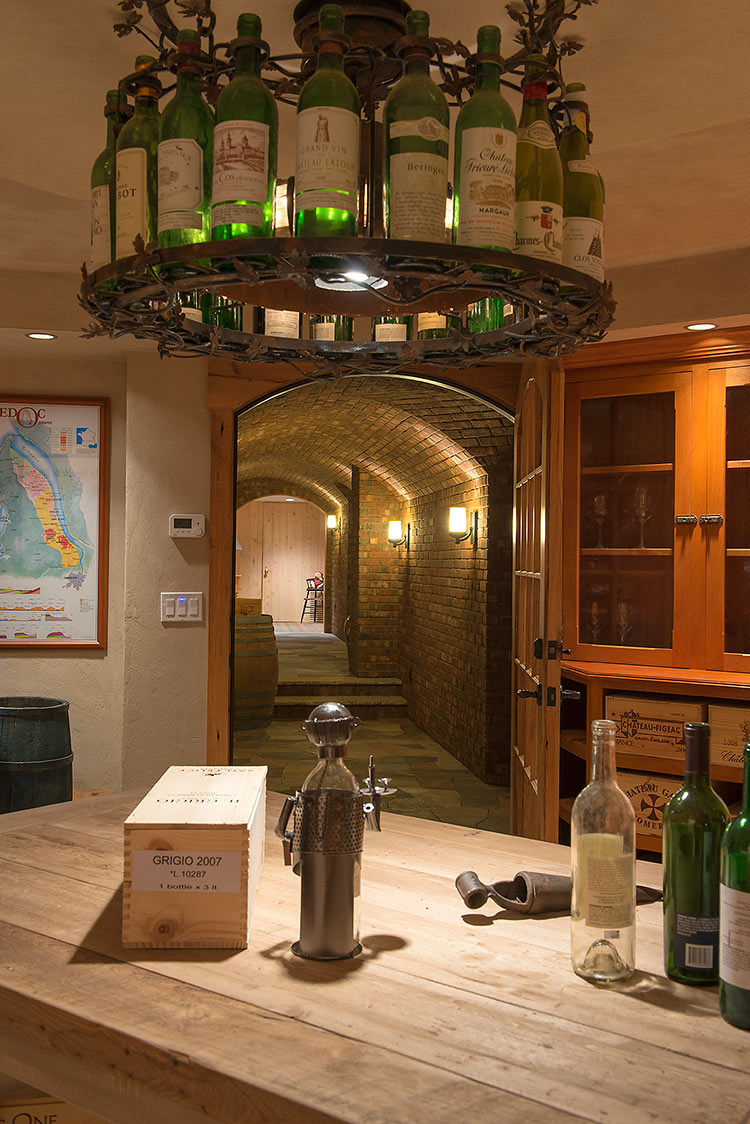 LED lighting can provide plenty of light while still evoking the appropriate mood. This wine cellar designed by Christopher P. Williams Architects, PLLC in Meredith is softly lit with cove lighting over the cabinet, picture lights, a chandelier and wall scones along the hallway.

“Recently, someone asked me if I noticed a reduction on my electric utility bill after changing one of my [existing] homes from incandescent to LED. Short answer, yes! The cost savings on the 112 bulbs converted to LED was in excess of $1,000 in the first year alone. But bigger savings is paying forward, all our children and future children will benefit from this bright idea!”

However, talking about LEDs can be daunting. This new technology comes with a lot of terminology.

The best way to learn about LEDs is to visit a lighting showroom. There you can see the bulbs and fixtures. You can experience the light of various types of LEDs and talk to a knowledgeable lighting designer. Because LEDs last up to twenty years, they really are an investment.

Cynthia Regnier, a lighting designer at Rockingham Electric in Newington, has explained and demonstrated LED lighting for many years. She’s designed lighting for existing homes and new construction. In the lighting lab, Regnier flicks on LEDs that illuminate two identical test kitchens. This is a great way to compare LEDs with different color temperatures. Measured on the Kelvin scale, one kitchen is lit with 2700 K, the other with 3000 K.

Rockingham Electric has many examples of LED lighting, including cove lighting above cabinets and recessed cans. “For most homeowners, the easiest change is to replace lights in recessed cans with LEDs,” Regnier says. “And, replacing all of them at once results in a more pleasing aesthetic.”

Wendylee Brown, owner of The Lighting Showroom in Bedford, especially likes the new candelabra LEDs to retrofit existing fixtures. “They look very similar to incandescent candelabra bulbs, but have super bright lumens,” Brown says. “The LED minidriver is so small, you don’t notice it at all.” (With LEDs, light output is measured in lumens rather than watts; for retrofit LEDs, a driver is built in to accommodate LED voltage requirements.)

Lighting designer Vic Reno, of Reno Engineering & Light Design in Marlow, is so enthusiastic about LEDs that on his website, he features the New York Times announcement of the 2014 Nobel Prize in Physics for the inventors of the blue LED. Red and green LEDs had been around for a long time. The invention of the blue LED meant that white light had become possible. The Nobel Committee stated: “The LED lamp holds great promise for increasing the quality of life for more than 1.5 billion people around the world who lack access to electricity grids: due to low power requirements it can be powered by cheap local solar power.”

Reno emphasizes: “It’s important to realize that LEDs as a light source have only been around for 10 to 15 years. For example, fluorescent technology has been around for 70 years and has been continually improving.”

Recently, the Illuminating Engineering Society of North America established guidelines for the performance and longevity of LEDs. This, Reno believes, has resulted in a solid basis for the marketing and discussion of LEDs.

“If you have an existing home, you will need to do a little research in order to incorporate LEDs,” Reno says. “Retrofit LED bulbs may or may not be dimmable in your existing fixtures.  So, hang onto your receipt.”

When building a new home, Reno says people can almost certainly use all LED fixtures. “You can really design lighting in a new home,” he says.

“Architectural elements can be highlighted using LEDs. They can be placed up high and, presumably, will not need to be replaced for a long time. This convenience also applies to wall sconces, pendants and chandeliers.”

Reno lists other applications: LED light panels that can be used in ceilings and counters; LED tape that can run under and within cabinets; and now, just recently, outdoor LED lights. Unlike compact fluorescents, LEDs do well in cold weather.

As a designer, Reno relishes projects that stretch his creativity. Recently, he completed a design for The Quill Restaurant at Southern New Hampshire University in Hooksett. This modern restaurant features a glowing bar counter, casework accent lighting, pendant lights and a lighting control center for multi-scene settings.

Interior designer Randy Trainor of C. Randolf Trainor Interiors in Franconia takes a practical approach to LEDs. “I work with a lot of architects who use as many LED fixtures as they can—mostly in chandeliers and wall sconces,” Trainor says. “Lately, I’ve worked on a number of double-height living rooms, and LEDs have been invaluable in that context.”

Plus, as an added incentive, with NHSaves—a collaboration of New Hampshire’s electric and natural gas utilities working with the N.H. Public Utilities Commission to increase energy efficiency in the state—many New Hampshire customers may find they qualify for a rebate when they incorporate LED lighting.

“LED lighting has come a long way in just the past two years,” Williams says. “There’s more control, the color spectrum has improved, and the manufacture of bulbs and fixtures is more reliable.

“The speed of innovation in LED technology is comparable to that of phones, tablets and computers,” Williams says. “The change is profoundly fast.” 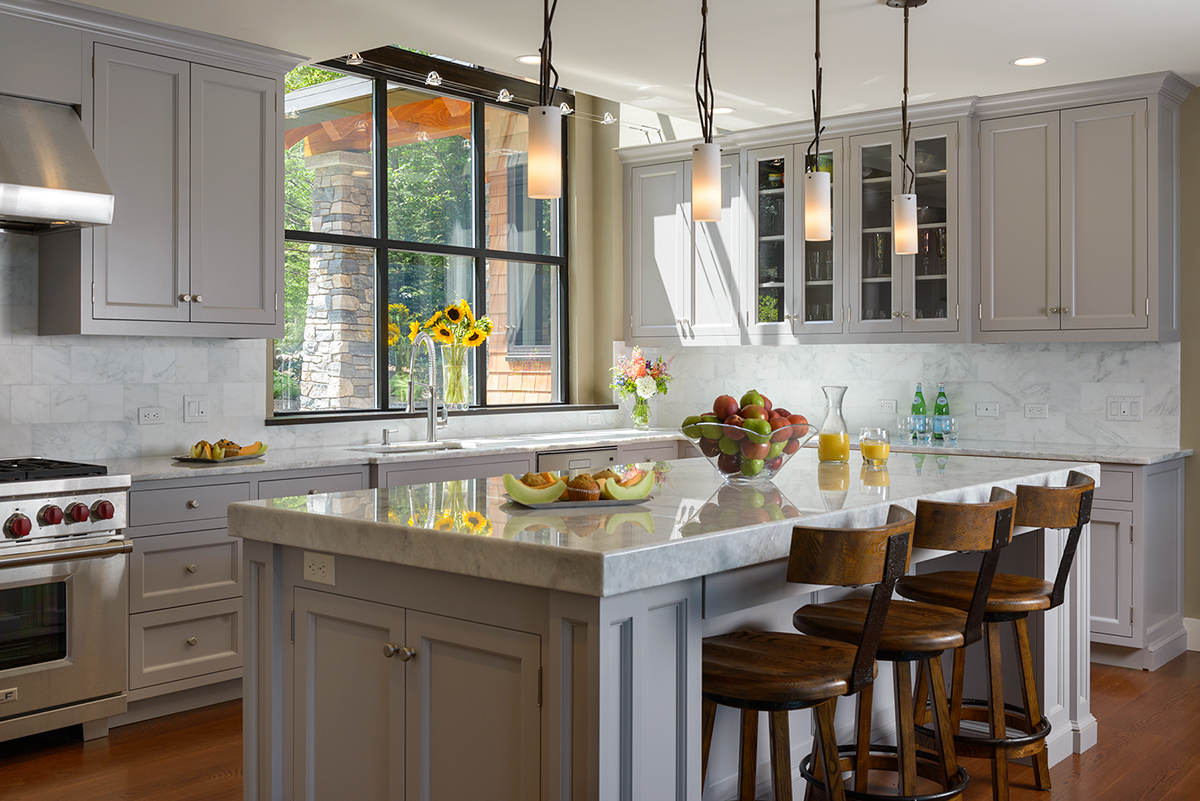 Finding LED fixtures that meet both the aesthetic and lighting level needs for given tasks is no longer a challenge. Lighting a home completely with LED fixtures is absolutely possible, as architect Jeremy Bonin did in this home he designed.

The color temperature of light sources is measured on the Kelvin scale. The degree unit is a kelvin (K). For practical
purposes, a consumer needs to know that 2700 K (seen as yellow) is roughly equivalent to a 60-watt incandescent bulb; 5500 K (seen as blue) is equivalent to daylight.

Drivers and transformers for LEDs are necessary because LEDs require special voltage and controlled current to operate properly. Therefore, the 120-volt house source needs to be reduced (transformed) and the current needs to be controlled. This is the function of the driver or transformer. Drivers can connect to the module or light by a cord, or be
manufactured as part of the light.

With fluorescent tubes and compact fluorescent lights (CFLs), an electric current flows between electrodes at each end of a tube containing gases. This reaction produces ultraviolet (UV) light and heat. The UV light is transformed into visible light when it strikes a phosphor coating on the inside of the bulb. All fluorescent lights contain mercury.

With light-emitting diodes (LEDs), an electrical current passes through semiconductor material, which illuminates the tiny light sources called LEDs. Common LED colors include amber, red, green and blue. There is actually no such thing as a “white” LED. To get white light, different color LEDs are mixed or phosphors are applied to convert the color of the light. While LED lights generate less heat than other lights, their heat must still be managed. Many LED lights are dimmable.

Lumens are a measure of the amount of light produced. The more lumens a light bulb emits, the brighter the light. For practical purposes, a consumer needs to know that a 60-watt incandescent bulb produces 800 lumens, whereas an LED bulb that consumes only 11 watts produces approximately 800 lumens.

Retrofit LEDs are designed to fit into existing screw-type fixtures. A driver, built into the base of the lamp (or bulb), is necessary to accommodate LED voltage requirements.

Watts (W) measure the rate at which lights consume energy. Watts do not measure the brightness itself. Power is the rate at which energy is generated or consumed, and is measured in watts or “energy per unit time.” For example, when a light bulb with a power rating of 100 W is turned on for one hour, the energy used is 100 watt hours. The same amount of energy would light a 50 W bulb for two hours.

Information is from various sources, including www.energystar.gov, www.lumennow.org and www.thisoldhouse.com.