Why it's important to have a user-friendly bathroom

Several homeowners share stories of how they transformed these rooms to function for family members of all ages.

As the saying goes, “the only constant is change.” And that’s true for homeowners—family size changes, individual needs change, our own wants change. It’s up to thoughtful design to keep up.

This is especially true in the bathroom, where the concept of “universal design”—making a space work for everyone, no matter what age, size or ability—is proving invaluable. After all, according to the Centers for Disease Control and Prevention, more than 30 percent of bathroom injuries among teens and adults happen in the bath or shower. But slips and falls can also occur while using the toilet, and leaving and entering the tub. Not surprisingly, injuries increase as we get older, especially after age 65 (“Watch Your Step While Washing Up” by Nicholas Bakalar, the New York Times, August 15, 2011).

Many of today’s homeowners are looking to lower those statistics while incorporating the principles of universal design in their homes.

Extra space that comes in handy

Ann Marie Parrillo of Wilmot knew she wanted to offer her mother a home when she was no longer able to live on her own.
So when Parrillo planned her new home, she included a first-floor “mini-suite” with a living room with a coffee bar, bedroom alcove, and bathroom fitted to allow a walker or perhaps a wheelchair.

As it turns out, her mother has only stayed in the suite as a short-term guest, but Parrillo’s planning and the specially designed bathroom have been used in unexpected ways. Her college-age son had surgery and used the suite for his recovery. Her brother-in-law became very ill, requiring assistance and a wheelchair. Her brother occupied the suite with his young children who couldn’t be separated from their dad and enjoyed showers in the oversized shower. Most recently, Parrillo had a foot injury and used the suite during her own recovery.

The suite was designed to be safe and comfortable for everyone. The vanity sink is lower for Parrillo’s shorter mother. In addition, the vanity doors under the sink fold back and slide into the cabinet, out of the way, to allow knees to fit under the sink for use with a chair or wheelchair.

Instead of a bathtub, the room has a large shower with grab bars for safety as well as two types of showerheads—a standard hands-free showerhead and a hand-held shower. The hand-held shower is useful when the user is seated. The shower threshold doesn’t have a step, which reduces the likelihood of tripping and allows wheelchair entry.

The sink faucets and shower controls are easy-to-use levers. Finally, the toilet is located next to the wall in case a grab bar is needed in the future. Adding built-in cabinets for supplies and laundry bins in the vanity on one side of the room ensured the bathroom remained spacious and easy to work in.

“The bathroom has functioned really well in more ways than I ever intended when designing it,” Parrillo says.

Planning for the future

Ellie and Walt Goddard had previously lived in a large lake house that seemed too much to handle after retirement. So when they fell in love with a small cottage with views of Lake Sunapee, the couple decided to downsize.

The Goddards added a bedroom suite to the main floor for one-floor living. Since they planned to “age in place,” they wanted their master bath to be open and free of barriers. This paid off sooner than expected when Ellie recently needed knee surgery.

The shower is large and spacious without a door to wrestle with. The extra space and the hand-held shower meant Ellie could sit on a bath stool to have her shower. (There is also a conventional hands-free showerhead.) 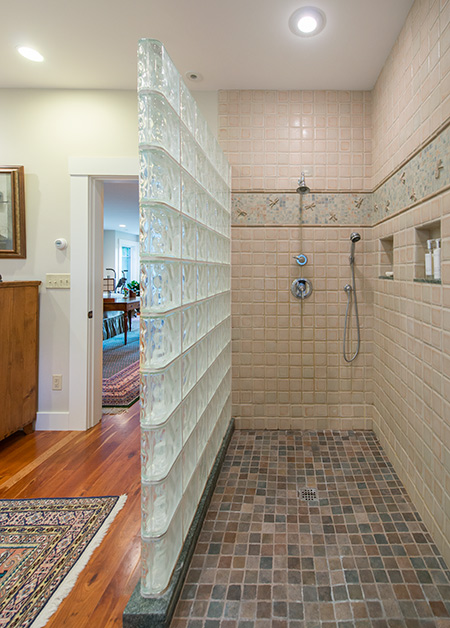 The shower is large, spacious and without a door for easy access. The extra space and the hand-held shower allow a person to sit on a stool while showering.

The floor space in front of the double-sink vanity is big enough for two people, one of whom has a walker. Since the space allows it, Ellie uses a lovely piece of antique furniture to keep extra bath supplies. The antique is a flexible solution since it can be easily removed to accommodate a wheelchair in the room.

At the time the bathroom was built, Ellie wanted to have a separate space for the toilet. She notes that this prevents side access to the toilet, which might be important if a wheelchair were ever needed. The only other thing she would change is adding grab bars in the shower. “Everyone could use grab bars in the shower, especially as you age,” she says. “It is just so much safer.”

A third homeowner wished to design a guest suite to be adjustable for future use if the homeowner’s parents should need care. The shower and the toilet are in a large alcove, separate from the sink and vanity. This maintains the intimate feel of a conventional bathroom while breaking up the larger space necessary for accessibility.

Many of the requirements to make this bathroom truly accessible are not necessary for the homeowners now, but they planned the space to be adaptable in the future. The glass wall of the shower is removable, and the floors of the shower and bathroom are flush to allow wheelchair access. Structural blocking was placed in the walls where grab bars can added in the future.