Sheilagh Flynn’s richly textured and colorful ceramic wall art symbolizes her view of the world: a unified whole of many pieces. 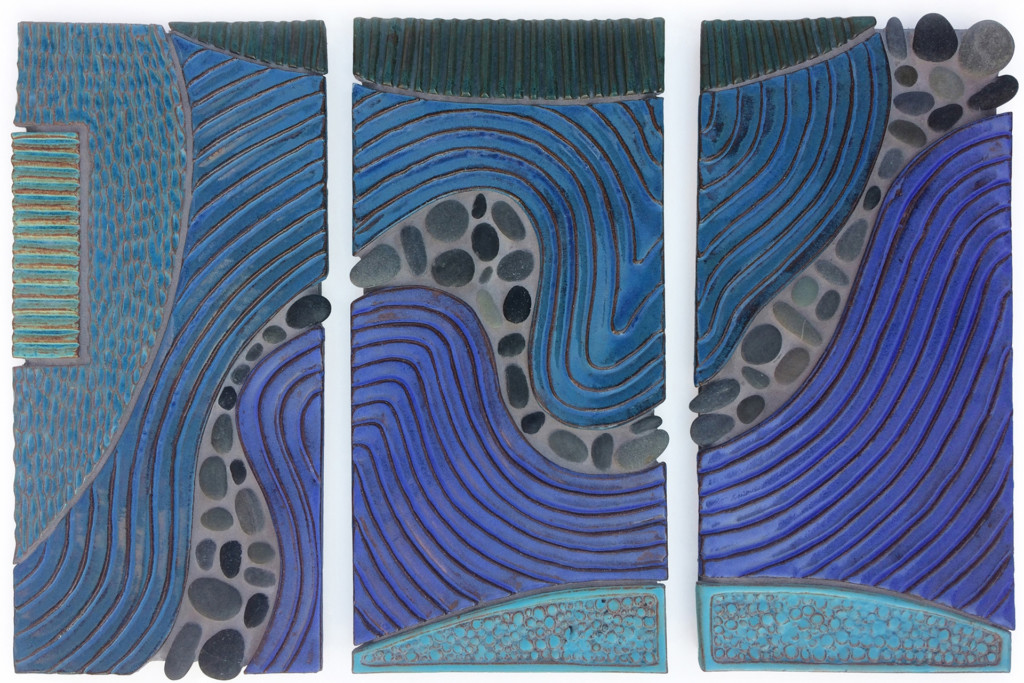 Earth Resonance is a mixed-media wall mosaic made by Sheilagh Flynn of carved ceramic—glazed in vibrant blues—and beach stones.

Sheilagh Flynn discovered clay at Boston College, where she received a bachelor’s degree in fine art in 1982. “Clay is so seductive,” she says, “and I quickly fell in love with the material and the process of making pottery.”

Since her college days, she’s worked in studios in Cambridge and New Bedford, Massachusetts; studied graduate level ceramics at the University of Massachusetts, Dartmouth; and made her way to New Hampshire, where she set up a studio in Center Conway. She is a skilled and talented potter and clay artist, proficient in throwing as well as sculpture and hand building. Make sure to drop by her booth in August at the League of New Hampshire Craftsmen’s Fair at the Mount Sunapee Resort in Newbury.

Sheilagh Flynn [SF]:  No—up until five years ago, I was primarily making thrown pottery on the wheel. I started with raku when I was in Cambridge at the Radcliffe College Ceramics Studio—first I was a student, and then I began teaching all their raku workshops. Since I was interested in making functional pottery, I also did high-fire reduction stoneware, which is fired in a gas kiln. I made simple forms as well as pitchers that looked like birds, along with altered forms like ovals. All these pieces were made on the wheel. 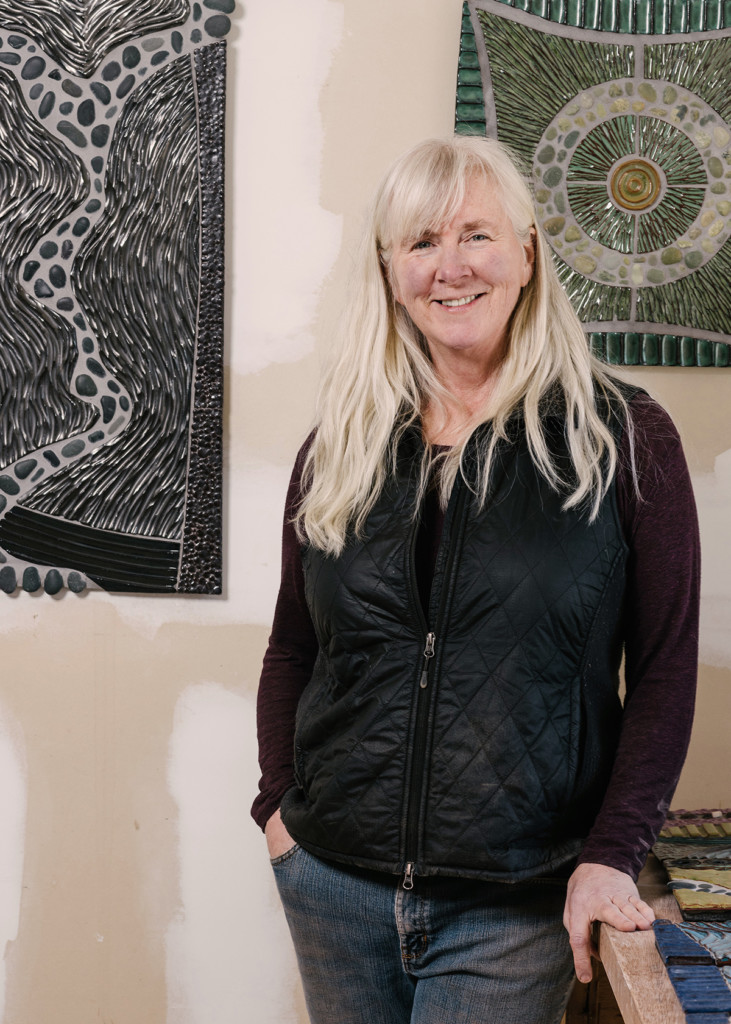 Clay artist Sheilagh Flynn in her Center Conway studio. The clay and beach stone mosaic on the left is from her River series while the design of the mosaic on the right is based on a mandala.

NHH:  How did your work evolve from there?

SF:  In 1990, I became restless and enrolled in the master of fine arts program in ceramics at the University of Massachusetts, Dartmouth. I wanted to study with Chris Gustin—a well-known ceramic artist who does wheelwork and large, hand-built sculptural vessels—and Karon Doherty, who made hand-built, narrative pots that were quirky and fun. I knew I needed to expand my work and wanted others’ input.

NHH:  What was your takeaway from graduate school?

SF:  This was an important exploratory time for me. I began carving, which was the genesis of what I do now with my wall work. I also worked more intuitively with the clay and explored the nature of the clay—its plasticity and unique ability to record marks. This led to an interest in surface pattern and rhythm, which are the underpinnings of my
current work.

NHH:  What direction did your work take after graduate school?

SF:  After graduate school, I established a studio in New Bedford in an old textile mill. This was an old brick building that had great light. Because I couldn’t set up a gas kiln there, I began working with earthenware, a red clay that’s fired at a lower temperature in an electric kiln. I came to love the richness of the terracotta and its surfaces. Where my high-fire reduction work had been very precise—bowls with flange lips, pieces that were all the same—my earthenware pieces were all different and very textural. The investigation into surface textures and marks was incorporated into the functional pottery I started making at this time.

NHH:  What brought you to New Hampshire?

SF:  I fell in love with Tom Flavin, a potter I met in graduate school, and moved here in January 2014 to be with him. We now share a building where we both work, but we each have our own spaces. Shortly after I moved here, I got sick and had to take about six months off. When I began working again that November, I gave myself permission to start new work that had been incubating for a while in my head. The initial foray into this new world was eight-inch mosaics, the beginning of my current work.

NHH:  What inspired this work?

SF:  I got the idea of making my River Series, Found Objects pieces based on aerial views. When I fly, I love sitting at the window and seeing the landscape below—the undulating rivers, the patterning of the fields, how irrigation affects the landscape and the rhythm of the furrowed ground. It reminds me of the textures of quilts, and the color and lines of abstract painting.

NHH:  What is your process for making these pieces?

SF:  I work in a six-week cycle. First, I flatten out twenty-five pounds of clay to stretch and compress it, then run it through a slab roller so it’s about one-inch thick. I transfer this clay to a wallboard and roll it with a rolling pin; then I cover it with plastic and let it rest overnight. The clay wants to warp, so the next day, I roll it again to about a one-half-inch thickness, cover it and let it rest again overnight. The following day, I cut the pieces to size to create my “canvas,” and carve them soon after. It takes a lot of thought to get the pieces I want in a “canvas.”

My other concern is that I want the clay to be not too hard and not too soft. This perfect amount of wetness is called “leather hard.”

I have a lot of tools for carving. My favorite is made from a piece of strap steel that held bundles of lumber—my teacher gave the steel to me and you can’t find it anywhere now. I use it to show rivulets of water on the clay.

The League of New Hampshire Craftsmen holds its eighty-sixth annual fair August 3–11 at the Mount Sunapee Resort in Newbury. As one of the premier craft shows nationwide, this juried fair showcases work by some of the finest craftspeople in the country.

See and shop for one-of-a-kind fine crafts that are both beautiful and functional. And meet the hundreds of makers, including ceramic artist Sheilagh Flynn, and learn about their vision and
passion for their craft. Other highlights of the fair include:

I’m also a flea market junkie and look for anything that will make a mark in the clay. For instance, old drawer pulls make great marks; golf tees create con-vex dots; and rounded dowels are the perfect tool for dimpling. I never know exactly what textures I’ll use until I come to the piece. The surface work is a composition like music. There is a melody with bass notes and accents. This is similar to my processes. I decide on a primary texture and accent with contrasting marks, changing the scale and the rhythm to create visual interest. Success means the whole piece “sings.”

NHH:  There are also stones in your pieces. Where do you get them, and why do you use them?

SF:  I have collected rocks since I was a child and love them—they have become the rivers in my pieces. I also like the change in material and rhythm that stones bring to my clay work. What’s more, this gives me a good reason to continue collecting rocks.

I grew up in Connecticut, but my parents always had a summer house in Scituate, Massachusetts, and that’s where I collect my rocks. I go to the beach and look for relatively flat pebbles in a variety of colors but with a consistency of outline—round, oval, triangular—that are not too jagged and not too big.

NHH:  How do your wall pieces come together?

SF:  After my clay pieces are fired for the first time, I begin to visualize the final mosaic. I consider which color combinations will make the piece pop.

The glaze palette is varied both in color and surface. Surfaces include shiny, semi-gloss and matte. I have many color options—for instance, I have seven blues that I use regularly. The art is in the balance of color, the play of tonal harmonies or dissonance that makes the final work successful.

Once I’ve figured out what colors I want in the final piece, I glaze each clay piece separately. After they’re fired, I lay out the clay and stones on backer board. It’s like putting together a big puzzle. When I finally have the design in place, I use mortar to hold the tiles and stones permanently in place on the board. The last step is mortaring between the tiles and stones. The final work is one composition, but it’s really made of many pieces.